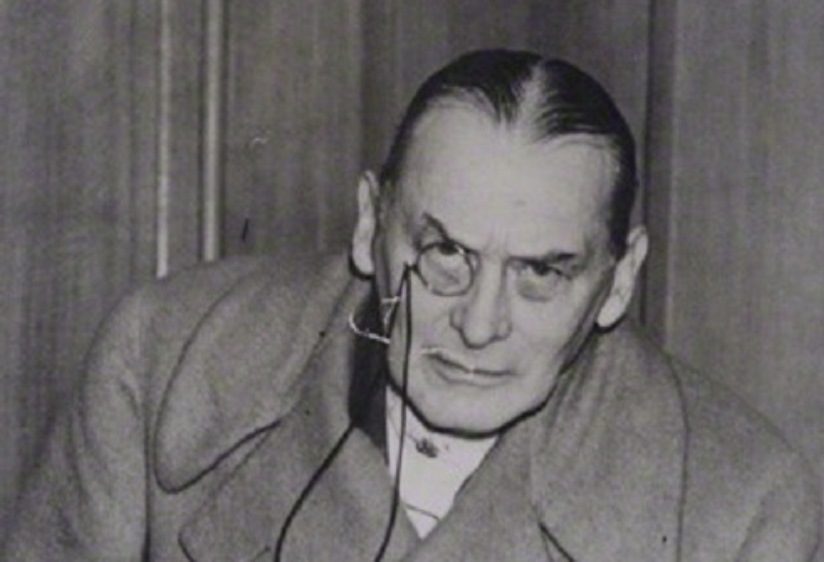 Noel Pemberton Billing is elected as an Independent for Hertford today in a by-election, but he is undoubtedly to the right of the Tories in his political views. It is his second time running for office. Billing ran in Mile End this January on a platform of outrage at London’s inadequate air defenses, stressing the need to protect the sprawling metropolitan area against the Kaiser’s airships, which have done little material damage but deepened British nationalist hatreds. He vows to deploy far more aerial artillery and aircraft; both items are already being produced at the maximum volume and speed that the empire’s wealth can buy, but demand is high in a global conflict, limiting deliveries.

Seen above in all his movie villain glory, tall and lanky as a haunted house butler, Billing is an aviation entrepreneur and critic of the Royal Aircraft Factory who boasts of his prewar success as a pilot, even making public appearances in the cockpit of a plane to prove that he is the “practical airman” who can best defend the seat of empire. The first thing he promises to do is end the blackouts, which reduce German navigation and bombing accuracy at the cost of night life, public safety, and crime deterrence. The second thing he’ll do is build the perfect Zeppelin-killing airplane to show the British government how it’s done, and in fact his company, a seaplane start-up called ‘Supermarine,’ will go on to build the Hawker Hurricane and the Spitfire, the two main aircraft which fight a future Battle of Britain against German bombers. Third, he will build a mighty airfleet to go bomb the Germans into submission with a massive, strategic campaign of indiscriminate destruction. Practical!

Naturally, with war fever burning hotter than ever and hatreds still deepening, Billing’s rhetoric is popular. Already stuck with a coalition government and wary of both right wing advances and crank engineers, the Liberal Party did not run a candidate in Mile End so that a Conservative could take the seat. But Billing will end up blaming the Jewish constituents in that London suburb, who make up a third of the electorate. Later this year he will found a publication titled Imperialist, an unapologetic newsletter devoted to victory and British global power. Among his demands, by 1917 he will agitate for “enemy aliens” (specifically German-born Jewish immigrants) to wear yellow stars of David on their lapels so that native-born British citizens can have priority at the air raid shelters. Inspiring European anti-Semites, and through them the postwar fascists, Billing’s prejudicial idea will eventually change the world in ways at least as horrifying as his air power doctrine. 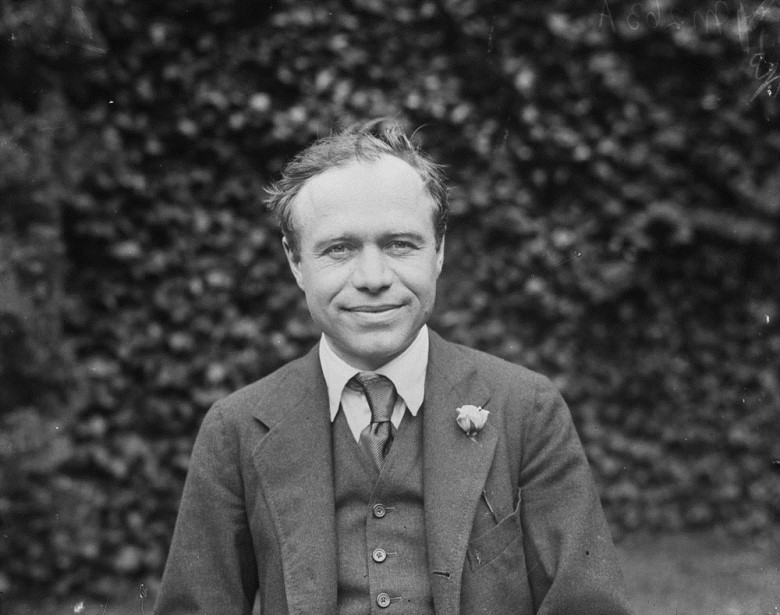 Ideology rules the world of Noel Pemberton Billing. His patron is a Canadian, an accomplished administrator, a Conservative, a nobleman, and a newspaper editor and publisher. As 1916 marches into the abyss of total war, the Imperialist is foremost among British publications in calling for censorship, outspoken in its editorial approval of amendments to the Defense Of the Realm Act. The next two years will see DORA extended over films, plays, paintings, and printings which might be considered anti-war, or even just insufficiently pro-war, to snuff out all discontent with the conflict. The Imperialist is enthusiastic about the new conscription law, seeing the tribunal system for conscientious objectors as an opportunity to harass and abuse pacifists, who are reckoned as low as Jews or socialists. Financiers and bankers come in for special scorn; so does German music.

Tellingly, so does sexual ‘deviance,’ which is denounced as a crime against the war effort. Homosexuality has always been taboo in Victorian England, but homophobia has intensified since the conviction of Oscar Wilde in 1895, and it is not incorrect to say that the Empire is imposing its morality on the world it dominates. British missionary activity and cultural influence are reducing the zone of acceptance that same-gender relations enjoy in parts of Africa and the Arab world, the Mediterranean, and Europe.

Like the Jews, gay men are vilified and scapegoated in the pages of the Imperialist. One of Billing’s most important writers in this regard is Arnold White, a 69 year-old anti-Semite who rails against Jewish immigration, especially from Russia. Seeking to solve that ‘problem,’ he even accepted a commission from Baron Maurice de Hirsch in 1890 to travel throughout the Pale of Russia so that he might “visit the alien in his home” whilst negotiating a Jewish mass-emigration to Argentina. Disturbed by the conditions of Berdichev and the “absurd persecutions” of Russian policy, White has nevertheless transformed into a bigot obsessed with ‘solving’ the “Jewish question.”

By 1917, he is also warning readers of “the systematic seduction of young British soldiers by the German urnings [homosexuals] and their agents,” who are “a great cancer, made in Germany” devouring British willpower and efficiency, “infect(ing) clean nations with the Hunnish erotomania.” Sexuality is granted magical powers of communication and coordination: “When the blond beast is an urning, he commands the urnings in other lands. They are moles. They burrow. They plot. They are hardest at work when they are most silent. Britain is only safe when her statesmen are family men.” Indeed, the family is the primary target of this German conspiracy: “If the conception of home life is replaced by the Kultur of the urnings,” White warns, “the spirit of the Anglo-Saxon world wilts and perishes.”

As the official records officer for the Canadian Expeditionary Force since last May, and the publisher this year of a three-volume history of Canada’s contributions to the war, Aitken’s star is rising. He is also named the Canadian government’s official liaison with France, and before the end of 1916 he is instrumental in Lloyd George’s successful bid to replace H.H. Asquith as prime minister. Drawn into the cabinet thereafter, he becomes a traitor in Billing’s eyes, so during 1917 he turns critical of his former investor and renames his publication Vigilante. Proclaiming in all-caps that his subscription newsletter is “THE ONLY NEWSPAPER THAT DOES NOT ACCEPT ADVERTISEMENTS AND THEREFORE IS FREE TO SPEAK THE TRUTH,” Billing also forms the Vigilante Society “to fight for purity in public life.”

By then, he will have even more fanciful writers to launch a sustained campaign of character assassination based on a fictional ‘Black Book’ that supposedly contains the names of 47,000 Britons currently under German blackmail for their alleged perversions. It is a propaganda technique that will see plenty of use in the 20th Century. Whatever else his accomplishments, Mr. Noel Pemberton Billing is inventing the modern paranoid style in the English language. 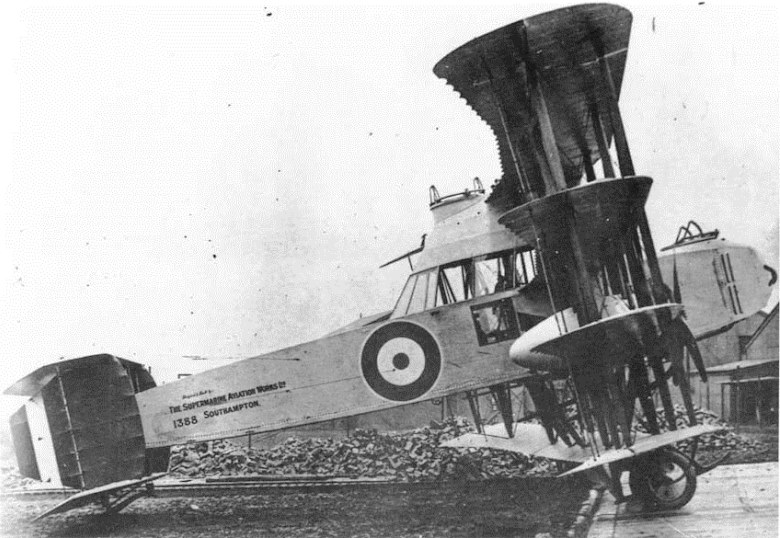 Billing’s secret weapon: the Supermarine P.B.31E Nighthawk was intended to intercept Zeppelins. A failed design, it has quad wings and a heated cabin, but a slow rate of climb, low ceiling, and unreliable engines. It only flies as a prototype