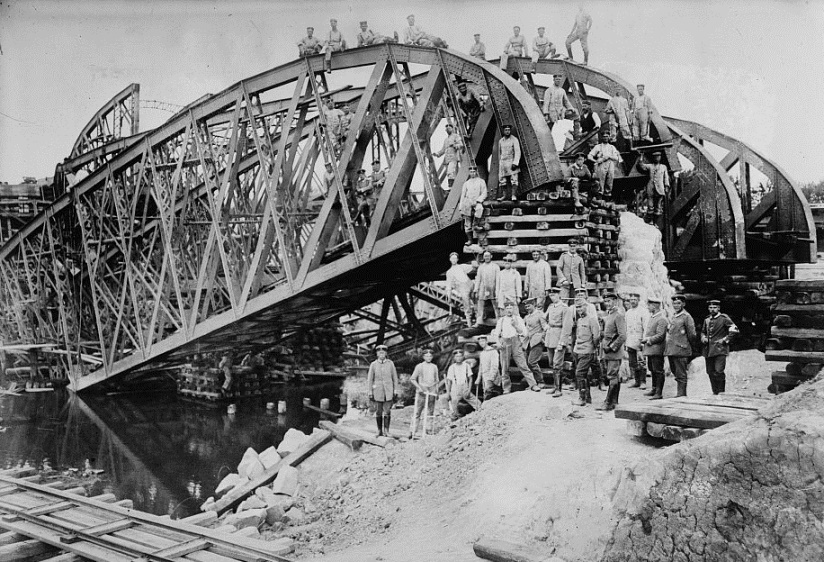 The Central Powers drove across western Galicia like a dagger throughout May, with the Austrians frustrated recently in the marshes along the Dniester River in June, but the fortress of Przemysl recaptured. General Aleksei Brusilov’s two tired corps have been fighting in the Carpathians since the winter and are significantly under-strength, so when two fresh German and Austrian corps opened an attack on his command two days ago, he knew his position in Lemberg was becoming untenable. Yesterday, his troops lost the railway to Rawa Ruska, cutting off Lemberg from the north. When his line of resistance breaks on the outskirts of the city today, Brusilov chooses to pull his corps out of the city and begin a retreat that will end in September fifty miles to the east.

He will be back. The rare Russian general beloved by his men, Brusilov is astute, studied, and methodical. His withdrawal leaves the medieval treasure known to us as Lviv untouched, but Brusilov’s fighting retreat over those fifty miles will make possible the counteroffensive next year which bears his name into history. That is just about the only good news for Russia, however, for their army is in a state of material collapse. Yesterday, the Grand Duke ordered a general withdrawal from the Dniester, but the army there is turning into a disorganized mob as authority breaks down. Belated withdrawal of artillery guns, many of which have no ammunition to fire anyway, inevitably means that some are left behind and captured. Thousands of Russians are being taken prisoner every day, many of them hungry and weaponless.

Like the eponymous Mackensen army group, which is now driving into eastern Galicia at a line of small lakes known as the Grodek, the German XLI Reserve corps and Austrian VI corps of Second Army are the bulk of a formation known by its commander’s unique name: Eduard Freiherr von Böhm-Ermolli. One of the Austro-Hungarian Empire’s best generals, Böhm-Ermolli is a perfect mirror to Brusilov, for he is also the rare successful commander in a hollow army. Like his counterpart, Böhm-Ermolli is genuinely admired by his men, and for them this day quickly turns into a celebratory triumph. 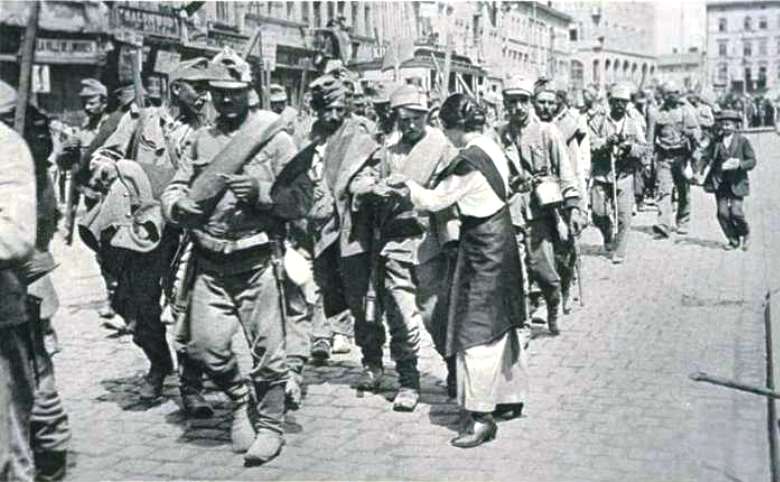 Soon after Lemberg fell in September, the Tsar decided to permanently annex all of conquered Galicia, part of which once lay within the ancient Kievan Rus. In one example of the Grand Duke’s ham-handed imperial approach to administration, schools were shuttered throughout the province while teachers were instructed in Russian; the experiment has been a failure, with most schools still closed even as the Russian Empire ebbs, and an entire year of education now ripped from Galician youth. Meanwhile, Lviv is an ethnic and linguistic crossroads, a place of many competing identities, so a Russophile cadre already existed to collaborate with the new regime and identify its enemies. Indeed, they were burning with resentment for being suppressed in the early days of the war. Most of these pro-Russian Galicians leave with the Russian Army today for fear of reprisals, clogging roads and lining rails that are already jammed with increasingly-disorganized columns in retreat.

Suspected of disloyalty, many of Lemberg’s Jewry have been deported east during the occupation, underlining the deep anti-Semitism of Russian policy along the Eastern Front. Forbidden to speak Yiddish or print their newspapers, the Jews of Lemberg earn the personal thanks of  Crown Prince Karl I for their patriotism. Thousands of ethnic Germans have also been forcibly relocated during the Russian occupation, highlighting the concurrent prejudices now afflicting Russia all the way to the Royal court. Whereas we tend to think of the Great War as a conflict created by chauvinism, there was no such nationalistic feeling in 1914, for the conflict is rather creating hatred where it did not exist before and deepening resentments that already existed, but were not yet powerful forces for horror. 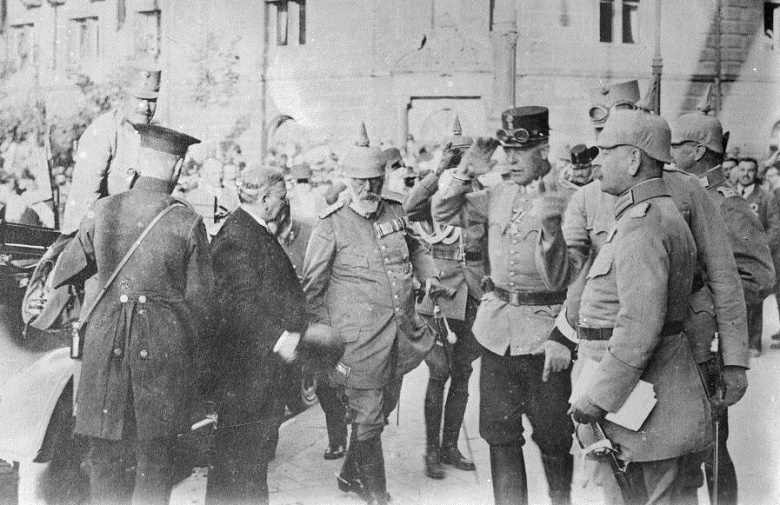 King Ludwig of Bavaria visits Lemberg in July of 1915. The liberation of the city was instantly hailed as a great national victory

As they retreat, the Russians start to smash and burn and loot literally everything. Much of the disorganization is due to drunkenness as men break into the last stocks of liquor in Galicia; they cart off everything of value, sparing no food or supplies of any kind, in a ‘scorched Earth’ policy which leaves a trail of resentment behind and devastates the remaining civilian population of eastern Galicia. The soil here is poor, and the people are mostly Ukrainophiles. Thus the Russian Army does almost as much damage to its reputation in leaving as when it arrived.

Tomorrow, the Supreme Commander of the ‘imperial and royal’ kaiserlich und königlich (kuk) Army, Archduke Friedrich, the Hungarian Duke of Teschen, will receive the ceremonial rank of Field Marshall from Emperor Wilhelm II for his role in the offensive. In the days to come. Russian planners will reconsider the harsh occupation of Galicia and form contingency plans for a kinder, gentler approach if the territory is reconquered. Meanwhile, the German and Austrian staffs now in charge of poor Galicia are quite nearly as occupied repairing the shattered infrastructure as they are chasing after the fleeing Russians. 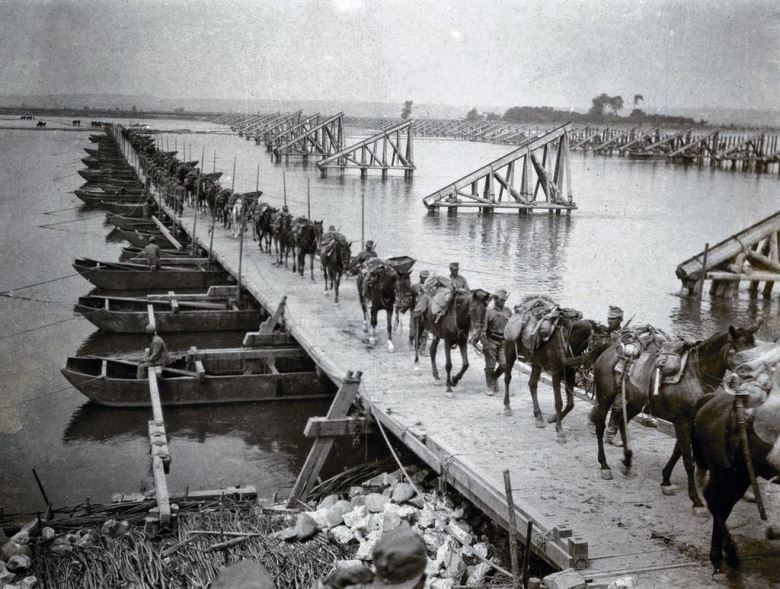 An Austrian army crosses a pontoon bridge, probably on the San River. Note the men walk their horses across rather than ride