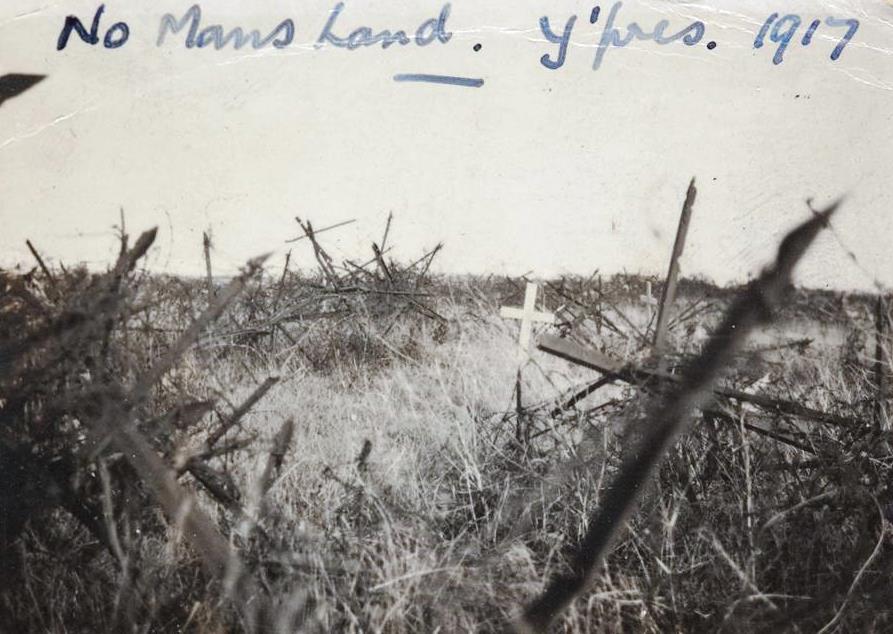 As early as the 14th Century, the word nonesmanneslond was used to indicate undesirable terrain between medieval fiefdoms that was held by neither master, or else used as common landfill and disposal zones. The phrase was later used to remark on the prisoner execution grounds along the north wall of London, and for the cramped and uncomfortable part of a sailing ship just inside the bow.

But in November 1914, exactly four years before the Armistice brings an end to the largest and bloodiest war since at least the 17th Century, the word is taking on a new meaning with the arrival of trench warfare. This is the story of a word, and the moment in which it gained its modern meaning as a neutral strip of land between two opposing lines of battle.

A German artillery barrage begins at 6:30 AM this morning. When it lifts from the British trenches to refocus on the suspected location of defending artillery batteries, 17,000 Prussian Guards attack across no man’s land in a bid to break through the British defenses at Ypres and march on the Channel ports. Erich von Falkenhayn, the Kaiser’s new Chief of Staff, has singled out the British Expeditionary Force (BEF) as the weak link in a tenuous chain of trenches that has stretched out like a river of death from the Swiss border to the English Channel since August.

During this weeks-long battle, Falkenhayn has wagered and lost the lives of tens of thousands of men on the proposition that he can bleed Britain into submission. He has earned precious little ground in the process.

A William Barnes Wollen painting of 2nd Ox & Bucks retaking Nonnebusschen from the Prussian Guards today. Both sides later deforested parts of the combat zone with high explosives and axes

The seven thousand men of I King’s Rifle Corps defend this sector under the orders of General Douglas Haig. Most of them fall back from the curtain of artillery shells, a pattern that holds throughout the years of trench stalemate. At first, the Prussians find their objectives empty. But then the I Kings in Polygon Wood hit them with enfilading fire down the trenches, and forty kilted men of the Black Watch resist their advance from a trench that is guarded by a few strands of barbed wire — an innovation that has appeared all along the Western Front, and that will fill no man’s land in the years to come. The artillery battery behind Polygon Wood blasts the Prussians with shrapnel over open sights, and a ragtag resistance begins to coalesce from the shattered defense.

It is enough to stop the ‘grey wave,’ just as it has already been enough every day going on four weeks here.

Finally, at 10:00 AM the two reserve companies of the Oxfordshire and Buckinghamshire Light Infantry (Ox & Bucks) counterattack at Nonnebosschen, a clump of shattered farm buildings where the German attackers have taken shelter. Although the Prussian Guards greatly outnumber the British across a broad front, they break here, mostly running away and leaving two thousand dead men behind. Stragglers who make a run for it get shot down. Others surrender when they are cut off from any hope of escape. The German army gains nothing from the attack; no man’s land is altered, but unchanged when the battle ends before 11 AM — the very hour at which the war will end in 1,461 days.

The German offensive will continue for another eleven days before failure, exhaustion, and a severe shortage of artillery ammunition bring an inglorious close to the First Battle of Ypres. A Bavarian private named Adolf Hitler has taken part in this legendary waste of young German lives; it is his formative experience of war. Over the next four years, most of the battles of the Western Front will unfold according to a similar script as General Falkenhayn’s attrition doctrine collides with first British, then French attrition doctrines in a bid to win the war by ‘bleeding the allies dry.’ 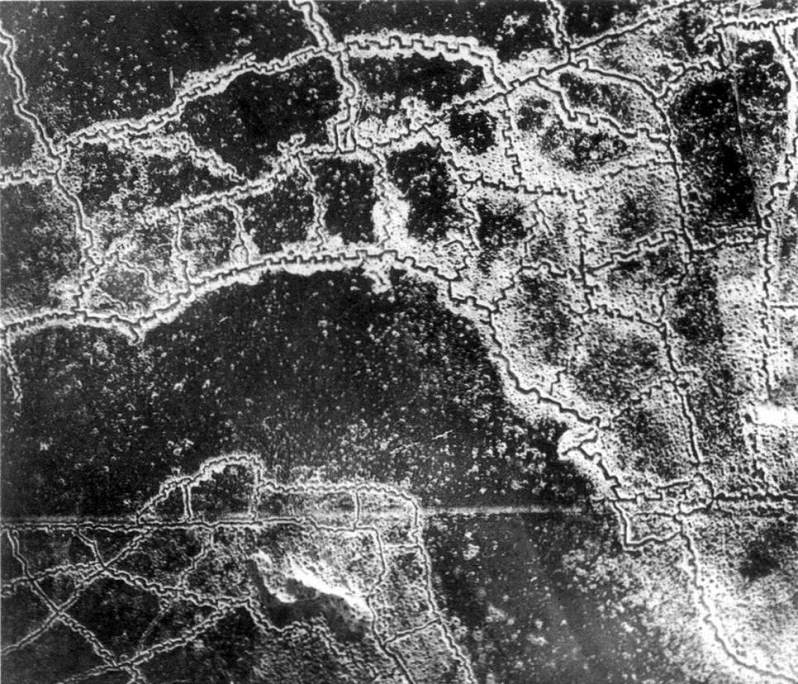 An aerial view of no man’s land. Note that the trenches themselves have been the primary targets of shellfire, mortar fire, etc.

The distinctive nature of this war as a huge, protracted siege has been anticipated by one extraordinary British officer. In 1909, Major Edward Swinton published The Point of View, a short story portraying a future battle between two long lines of trenches — and conducted according to the detailed commands of a headquarters that is completely delocated from the front where the actual fighting and dying takes place.

Known to his men as ‘Old Rule of Three,’ the fictional commander chooses to go fishing during the attack because he cannot personally affect the success or failure of his plan anymore; he must trust his army and staff to do their jobs, so the act of fishing is meant to project an image of calm leadership and business as usual, inspiring confidence. Incredibly, all of this is necessary, for as Swinton explains, the war of the future is simply too big for people at the tactical level to understand:

It was recognized that the days when any one man could by personal observation keep a grasp of the progress of the whole of a battle have gone…Modern fights may cover scores of miles, and no one man upon the scene can hope to obtain more than an infinitesimal portion of information by the employment of his own senses.

A year after the short story’s pseudonymous publication, Director of Military Training General Haig issues a new edition of Field Service Regulations that discourages generals from visiting the front, preferring that they remain at headquarters to collate reports from subordinates.

But we should not mistake Swinton as a militant advocate for industrial slaughter. He is a detached analyst of battle, a gifted fiction writer with a talent for explaining the tactical and operational arts of war to civilian and soldier alike. Another of Swinton’s stories is The Defense of Duffer’s Drift, a tactical primer on guerrilla-fighting set within a dream-narrative of the Second Boer War. Both of his stories are taught in military leadership schools around the world to this day, and both feature the shovel as the key to defending a position against larger forces with minimal numbers — and minimal loss of life.

Swinton’s most important role right now is his appointment by War Minister Lord Kitchener to the position of official war correspondent for the Western Front. Journalists are being kept far away from the fighting, so Swinton’s censored dispatches are the main source of news on these battles for the English-speaking world. Swinton used the word ‘no man’s land’ in his short story five years ago, and ever since trench warfare emerged he has used ‘no man’s land’ to name the ground between opposing trench lines. The phrase has been appearing in newspapers around the world for weeks.

By the end of the year, his term will become a permanent part of the Great War’s linguistic legacy at home and on the Western Front. The climactic episode will come on Christmas Day, when the famous unofficial truces in ‘no man’s land’ allow each side fighting here to share an accident of language, using the same sounds to name the ground on which they stand. As unauthorized fraternization breaks out with the appearance of a football, the neutral zone between the lines can still serve as a pitch, for no man’s land has yet to be occluded with all the wire and craters and obstacles by which the world will come to know it.

Yet Swinton is not done with the English language. While driving through France in October at the end of the poorly-named ‘Race to the Sea‘ and the beginning of this battle, he conceived of an idea to put armored cars on caterpillar tracks. When Sir John French rejects his idea as unfeasible, Swinton approaches Winston Churchill, who has recently seen armored cars in action at Antwerp. Promoted to Lieutenant Colonel and put in charge of the new Landships Committee in February, Swinton is the man who will decide to call the new invention a ‘tank.’ Having described the stalemate and slaughter of the Great War before it was fought, his vision will materialize as one of the most important new weapons for breaking the deadlock. 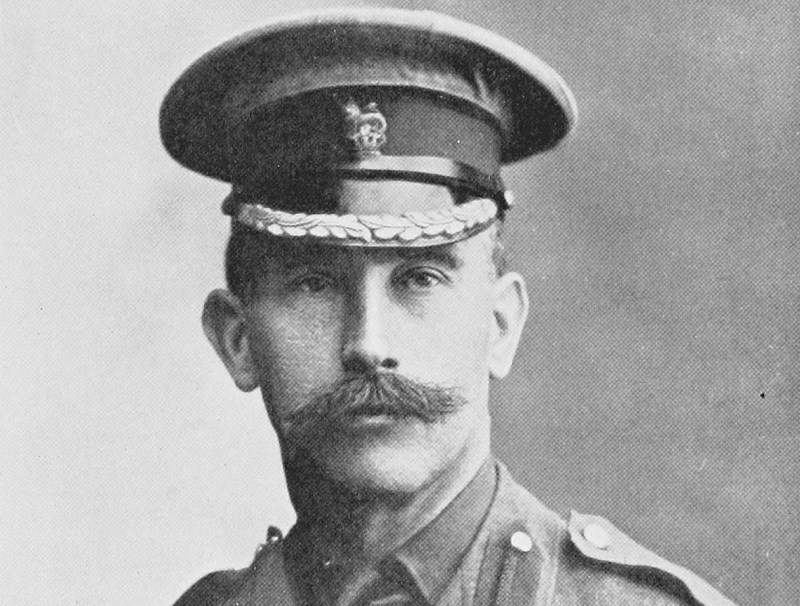 Col. Edward Swinton was one of the most consequential and influential soldiers of the 20th Century. His official dispatches were surprisingly evenhanded and as factual as he could manage to make them