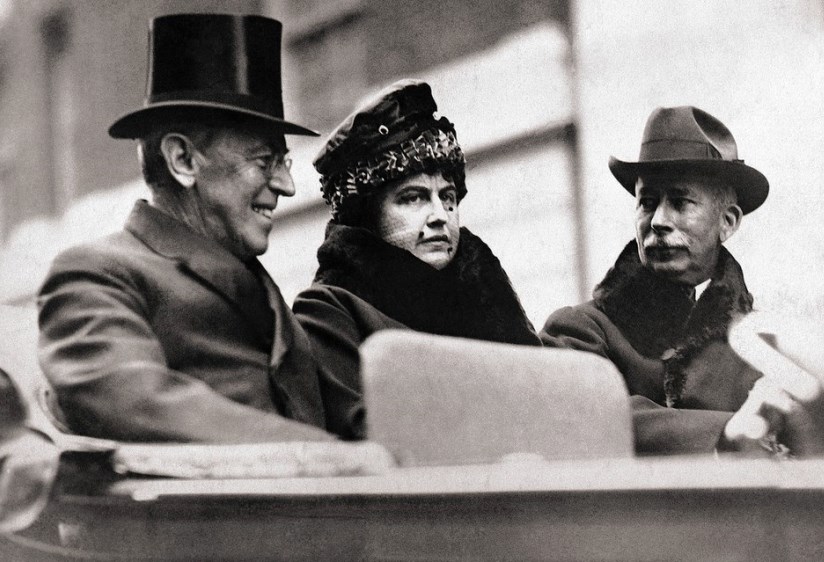 A widower who lost his wife almost the same moment that the war began, President Woodrow Wilson asked his girlfriend Edith Bolling to marry him this month. Their engagement is still a tightly-controlled secret, for Wilson’s longtime trusted political adviser and right-hand man, ‘Colonel’ Edward House fears a public backlash if the president’s mourning-time is suddenly cut short. Seen above, these three people form one of the more significant triangular personality clashes of world history.

Edith resents Edward, whose management has helped lay the foundations of the modern American national security state in response to German neutrality violations; Edward resents the lost time with his close friend and fellow son of the South Woodrow, who presides over a recovering economy just a year after markets stood in apocalyptic paralysis, with a year left to go before re-election; Woodrow resents the drama, and wants to keep both worlds intact even as they collide, a feat which will eventually prove impossible. ‘The personal is the political,’ they say, and the explosive personal chemistry of these three people will have lasting global consequences.

But this this not that story.

The SS Arabic, sunk eight days ago. A ship of the White Star Line, she was fitted with extra lifeboats due to the Titanic disaster. Ironically, Kapitänleutnant Rudolph Schneider’s long-range ‘up-the-kilt’ shot demonstrated his crew’s great skill

A week after the storied SM U-24 torpedoed the passenger liner Arabic in the stern as she zig-zagged through the Irish Sea, outward bound for New York, sending her to the bottom in ten minutes with forty-four passengers, the president is still not ready to make war over the lives of three Americans who were among the dead. As before, when flurry after flurry of stern diplomatic notes led to nothing, the United States makes no military moves. There are no provocations. Although they are happy to sell armaments to the world, Americans do not want the world-war, and the American president is more eager to make love than war.

Instead, today German Ambassador Johann Heinrich von Bernstorff promises the United States “full satisfaction” in the matter of the Arabic, proffers indemnities, and shows the American government formerly-secret orders issued to the Kaiser’s U-boat captains. Dated in the first week of June, they require crews to use their deck guns rather than torpedoes in most circumstances, greatly increasing their exposure and risk. These changes have already killed German submariners by rendering them vulnerable to countermeasures, spurring resentment in the Admiralty and the General Staff against a dangerous policy seemingly imposed by Washington. As September begins, the Kaiser entirely ends unrestricted U-boat warfare against civilian liners, “provided that the liners do not try to escape or offer resistance.” Merchantmen are still on their own, however, and the diplomatic progress is even smaller than it appears. 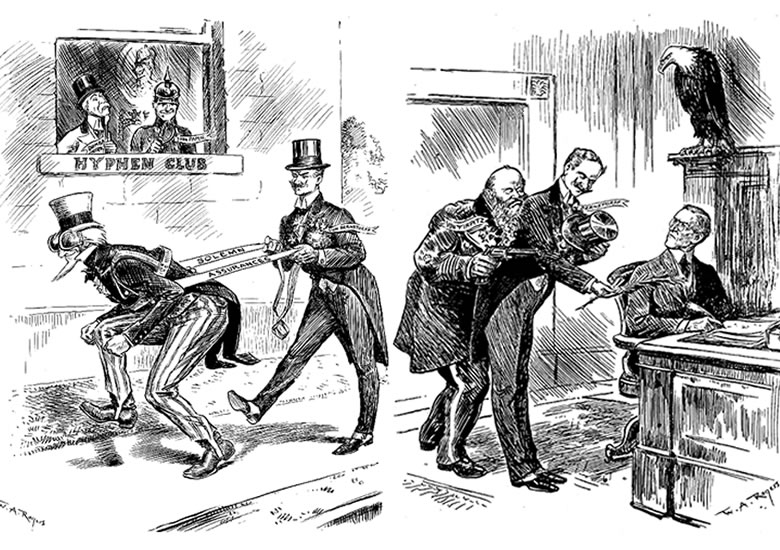 For as U-boat losses mount, and the allied blockade becomes increasingly effective even while American weapons and goods supply their enemies, the Germans will cease caring so much about what the Americans say. And by the end of the year, relations between Washington and Potsdam will have cooled even further, a frost partly precipitated by the expulsion of German diplomatic attaché Franz von Papen for various violations of neutrality. As 1916 begins, events will propel Wilson towards further acts of ‘preparedness‘ even as he runs on his laurels as the man who kept America out of the war.

Eager to conclude his nuptials beforehand, Woodrow Wilson will also marry Edith Bolling this December after a whirlwind public engagement. 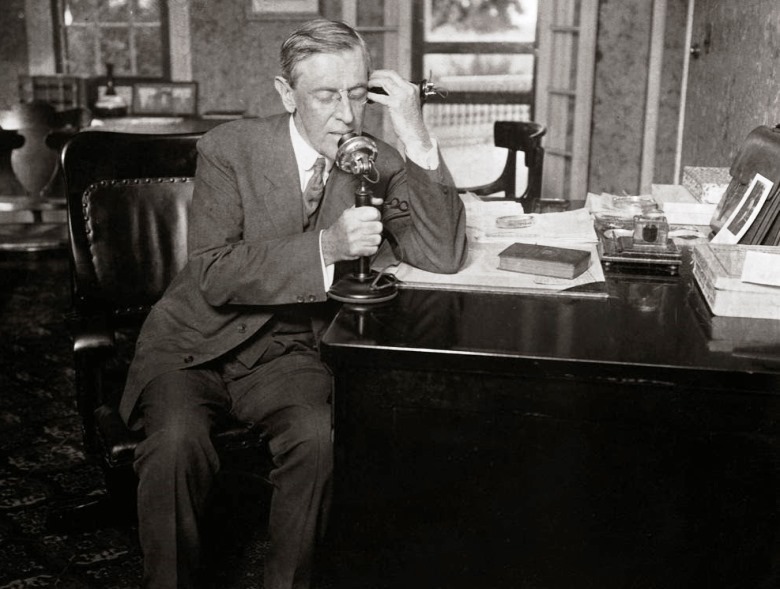 Wilson using a telephone. By this point, the Secret Service has already tapped every phone line used by German diplomats