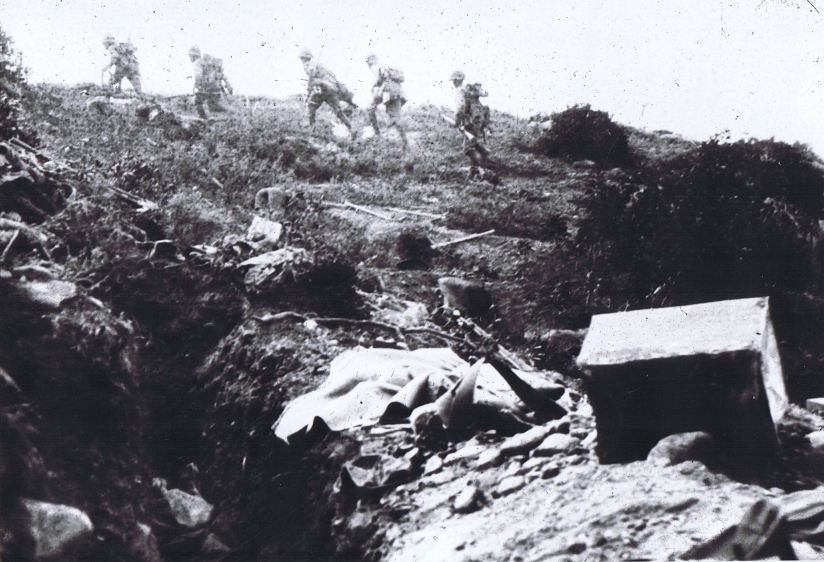 Above: the 7th Gloucesters advancing on Chunuk Bair from the Apex today, already under fire.

Setting out on the evening of the 6th, the New Zealand Mounted Rifles quickly overran the Turkish forward observation posts with minimal casualties, arriving at the base of the Rhododendron Spur in good order, but two hours behind schedule. Big Table Top fell to the Maori Contingent the next day. Advancing on the Apex, a height five hundred meters from the peak of Chunuk Bair, a battalion of the New Zealand Infantry Brigade got lost the next day, delaying the assault at the very moment when the objective was least-defended.

Reputedly drunk during the battle, Colonel Francis Johnston then ordered the Auckland Infantry Battalion to advance on the peak an hour before noon in broad daylight. A sudden chatter of machine guns greeted the Aucklanders as they advanced on a high point in between known as the Pinnacle, sweeping sixty lives away in a matter of seconds. Already behind schedule by a day, Johnson was pinned about three-tenths of a mile from an objective that Sir Ian Hamilton, overall commander of the expedition, had intended to occupy on the first day of landings in April.

Refusing Johnston’s order to continue the same attack, Lieutenant Colonel William Malone insisted on a night attack, when his men wouldn’t be silhouetted against the sea during the advance. Further delays lead to today’s operation, which is finally conducted at 3 AM with reinforcements from a British infantry division and the 7th Battalion of the Gloucestershire Regiment. Following a naval artillery bombardment that clears the mountaintop of defenders, they advance to claim the peak at last — and find themselves utterly exposed to enemy fire. 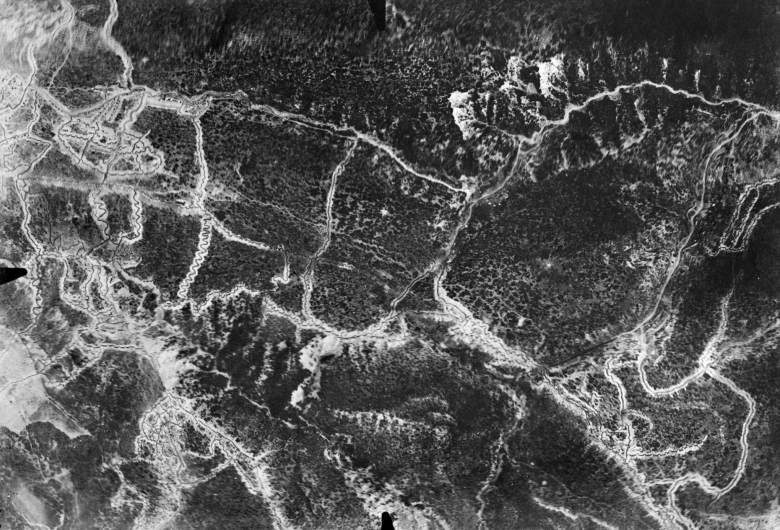 An aerial reconnaissance photo of the trench complex at Chunuk Bair. Via the Australian War Memorial

As seen in numerous battles on the Western Front, warfare in 1915 often happens at the high points of the terrain, but rather than claim them permanently the struggle destroys them. The peak of Chunuk Bair is exposed to view from two other high points: Hill Q, the objective of Lieutenant Colonel C.J. Allanson’s Battalion of the 6th Gurkha Rifles, to the north, and from Battleship Hill to the south. But the Gurkhas’ advance from the valley area known as The Farm is slowed by terrain and darkness, too, and they do not reach their destination until tomorrow, when Turkish defenders easily outnumber them.

The disjointed, ineffective execution of Hamilton’s plan reflects an ignorance of the conditions and an over-reliance on map reconnaissance. Units find the ground harder than Hamilton has anticipated from his headquarters at the Isle of Imbros, attacks meant to support one another take place separately, and friendly fire is a given. Lt. Col. Malone is killed by misdirected naval gunnery in the afternoon, when his new position atop Chunuk Bair has been under constant counterattack for twelve hours. The fighting is so hot that rifles become useless, ammunition runs low, and teams of grenadiers engage in an attritional game of throwing hand-bombs at one another — and just as often, picking them up to throw back, and just as often as that men will lose hands in the attempt.

Finally, with the darkness the shattered survivors are relieved by the Wellington Battalion. Malone’s command has suffered more than ninety percent casualties, while 350 of the Gloucester boys are dead along with all of their officers. After a daylong defense of the stony peak, where it is hard to dig very deep at all, the New Zealanders are in turn relieved by infantry battalions of the New Army — Kitchener’s men from North Lancashire and Wiltshire, who have a date with destiny. 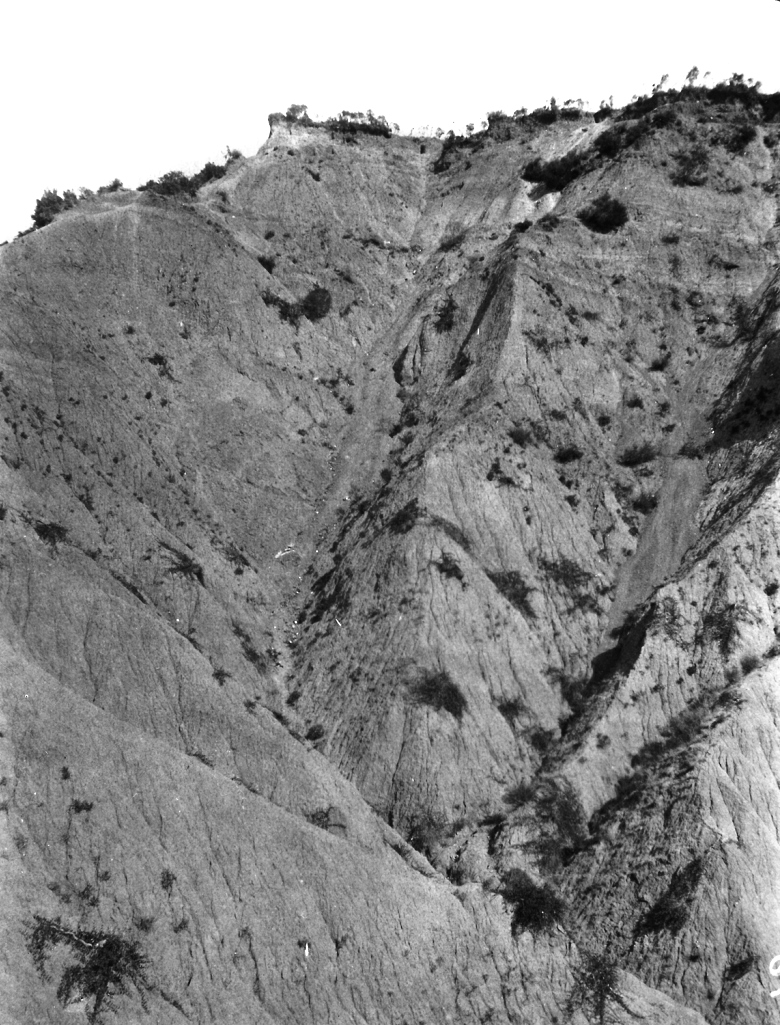 Big Table Top: an example of steep-sided, washed-out terrain men had to traverse in the dark. Via New Zealand War Memorial

The plight of a wounded man at Gallipoli is horrible to contemplate; lying exposed to fire, many are simply left to perish. With evacuation to the hospital ships inside the ‘golden hour’ impossible, those allied troops still able to walk face a long, treacherous trip downhill without food or water. The litter-borne can expect a long, bouncing trek by the same way, and upon arriving at the shore they must lie in the sun awaiting their turn to be placed on lighters and carried out to sea with occasional Turkish shells falling on the ever-exposed beachhead. Even on the hospital ships, stray bullets and shrapnel occasionally injure people who are ostensibly safe.

For wounded Turks, who have even less national infrastructure with which to supply their field hospitals adequately, the poor conditions, shortage of medicine, and lack of antisepsis equipment will mean a high death rate from infections — but their hospitals are not under fire. Their supply-line for everything from butter to bullets is also thousands of miles shorter than the invader’s. As the piteous wails of their dying enemies fill the night, the Turks gather to throw the aggressor off his new perch. 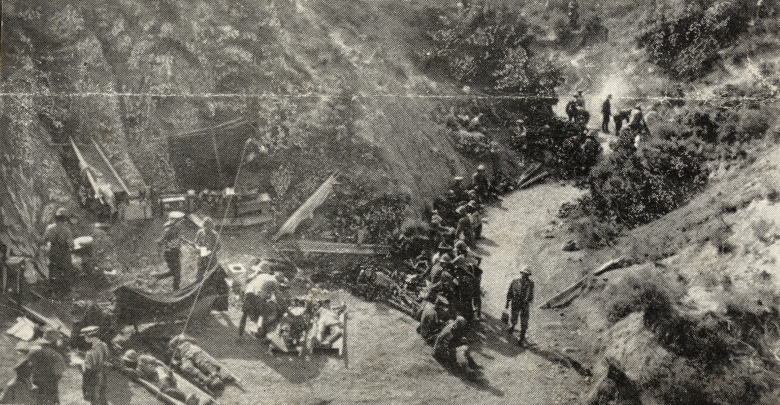 Advanced Dressing Station, No. 1 Field Ambulance, in the gully of Chailek Dere between Table Top and Rhododendron Ridge