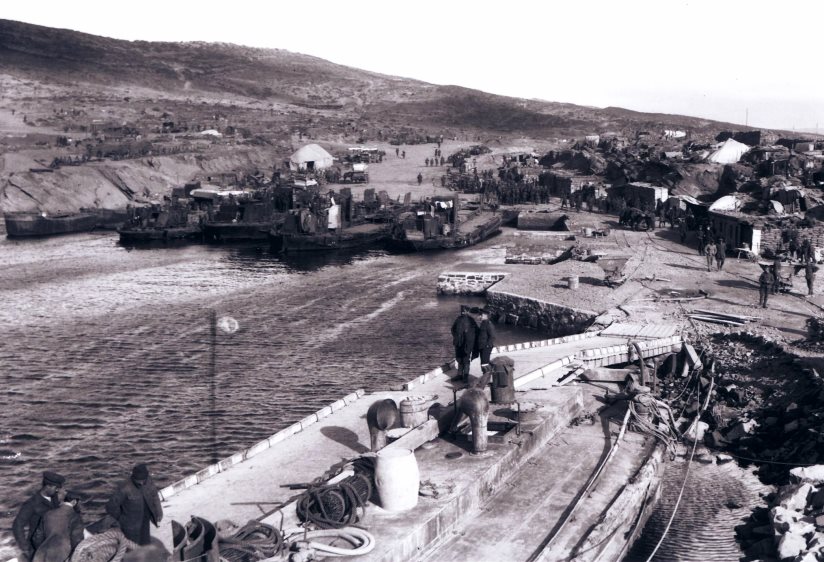 As always, what seems a simple plan to win the Great War at a stroke in Gallipoli is merely extending the warfare of the Western Front on the very edge of Europe — with the added complication of amphibious operations conducted before the invention of landing craft. A simultaneous assault by the Australians and New Zealanders against Sari Bair Ridge, paired with a new landing at Suvla Bay, is supposed to link two armies, win the heights amid the Dardanelles Peninsula, and relieve the exhausted British-French army at Cape Helles. Simple.

The three fresh British divisions landing today under General Sir Frederick William Stopford, a 71 year-old veteran of office postings who sleeps in while the actual landings are conducted. We can make too much of this fact, however, for there is little real good he might have done once the tremendous job of planning and setting the operation into motion was finished. Frankly, there is little anyone could do to fix a fatally-flawed plan, for Stopford’s corps has not surprised the enemy at all. Anticipating an allied attack in August thanks to intelligence forwarded from Berlin, German General Liman von Sanders has positioned German-backed Turkish divisions to cover the central heights of the peninsula.

It is the first day of another infamous fiasco. The Gallipoli campaign is an example of failures reinforced and expanded rather than righted — at huge expense in lives and limbs as well as treasure. It is the end of innocence about the nature of the war in which the British Empire finds itself locked in another stalemate, unable to win the war in 1915. With Germany and Austria shoving Russia out of its Polish dominions, today is the beginning of the end for illusions of a short, victorious conflict.

It is also the birth of modern Turkey, Australia, and New Zealand in blood and fire. 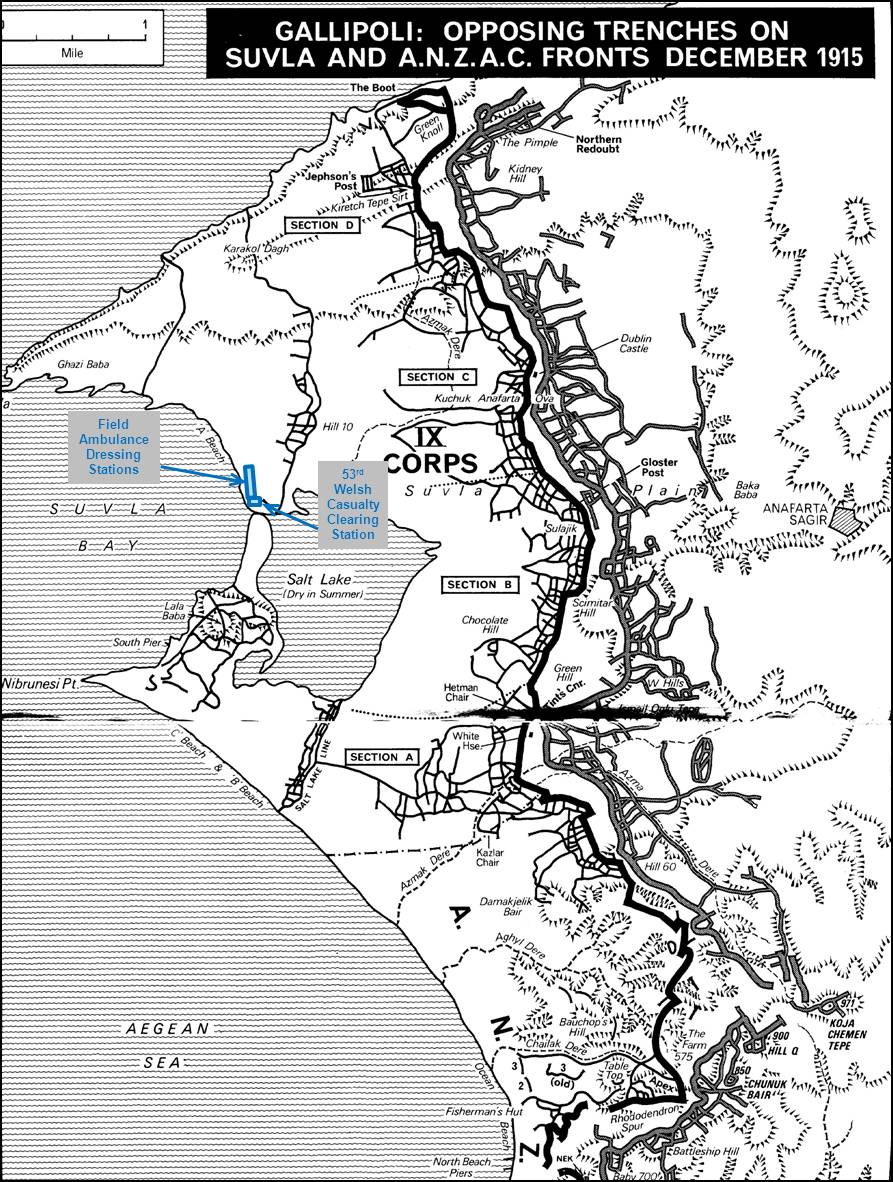 A Suvla Bay trench map. Despite the best of intentions, these battles will mirror the Western Front in casualties and horror

If we want evidence of Stopford’s inexperience at handling real battles, we can look to the day after his landing, when Turkish resistance stiffened and his men began to dig trenches faster than graves, and we can question the slow timing of his orders. But if we look at his infrastructure, he was clearly not an evil or incompetent commander, merely old and ossified and yet unblooded. At his direction, engineers begin erecting an artificial port so that supplies and horses and ammunition and men can disembark from lighters in efficient order. While there is plenty of useless dying and maiming at Suvla Bay, the pathetic cries of untended men dying in preventable agony make the smooth litter-transport of casualties to hospital ships all the more urgent. The daily traffic will be tremendous, and to make such communications bandwidth possible it is actually good to have a former adjutant like Stopford in charge. Nevertheless, his lack of urgency or initiative will lead Sir Ian Hamilton, commander of the Dardanelles expedition, to sack him by the ninth day after personally intervening to compel him to action more than once.

As the landings begin, a series of diversionary attacks begins at Anzac cove with the detonation of three mines intended to create craters where men can take cover. Two and a half hours later, the preparatory bombardment reaches its half-hour crescendo before the first 1,800 men of Australia and New Zealand go over the top to attack a plateau named for its singular feature: Lone Pine. Overcoming the Turkish defenders in a sharp fight at close quarters, from 7:00 PM the Australian 1st Infantry Brigade will spend the following three days defending the captured position from a series of fierce counterattacks. In a bitter irony, it is one of the most successful operations of the evening. 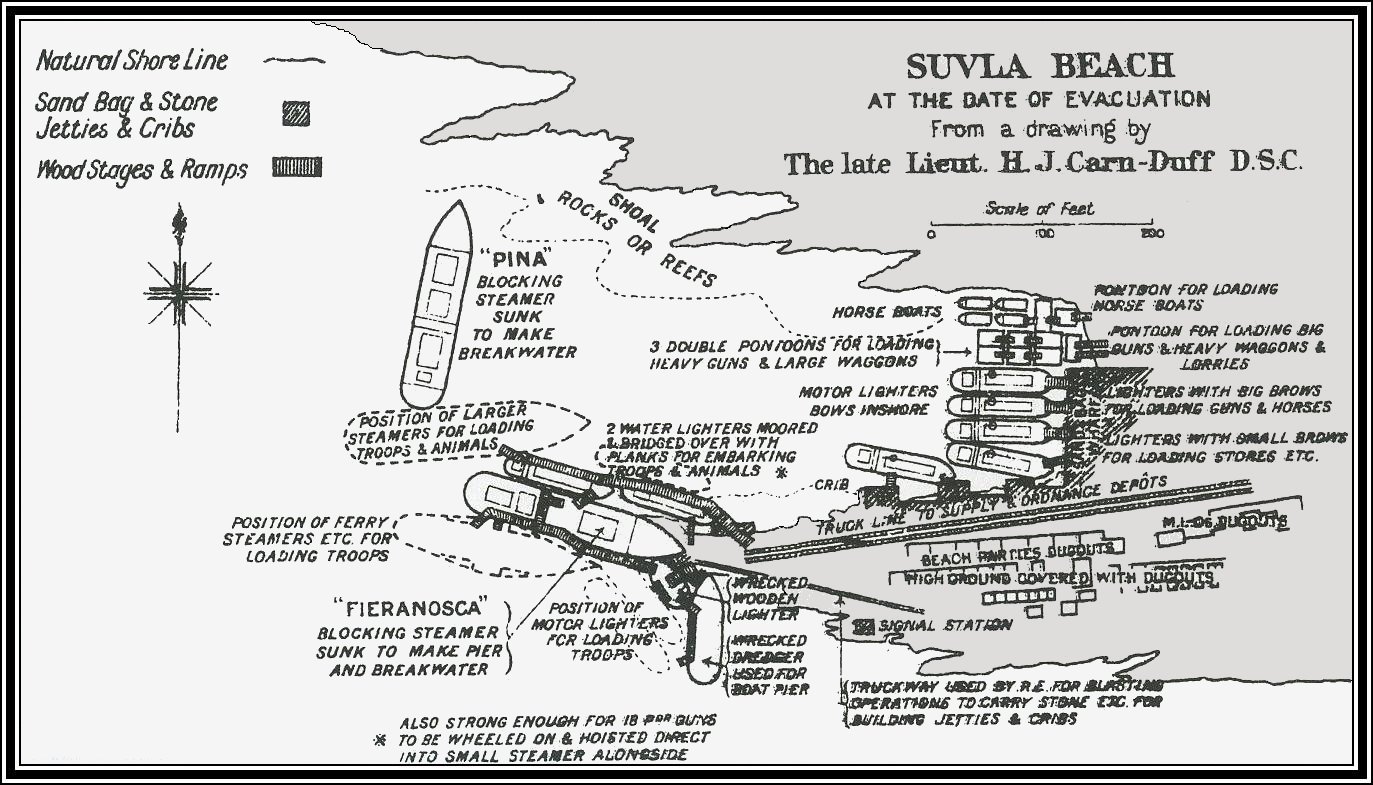 A tremendous amount of work is required to feed and maintain thousands of people. via Naval History.net

The plan only seems simple. Landing in the dark with inadequate reconnaissance, the British IX Corps repeats many of the errors and mismanagement foibles of previous operations at Gallipoli. Running aground on unseen sandbars, troop lighters get stuck still offshore, and their charges are forced to wade to land. A lack of immediate opposition on the beachhead belies the slow progress of Stopford’s force while Turkish resistance stiffens inland tomorrow. Meanwhile, further diversionary attacks by the Anzacs at Hill 971 and Sari Bair Ridge break down in complications and withering defensive fire, for trench warfare obeys the same rules here as anywhere else. Having come to the edge of Asia in search of a strategic breakthrough, the Allies unexpectedly keep finding the war they sought to circumvent. Over the next few days, the seemingly-simple plan will make casualties of more than 12,000 allied soldiers. 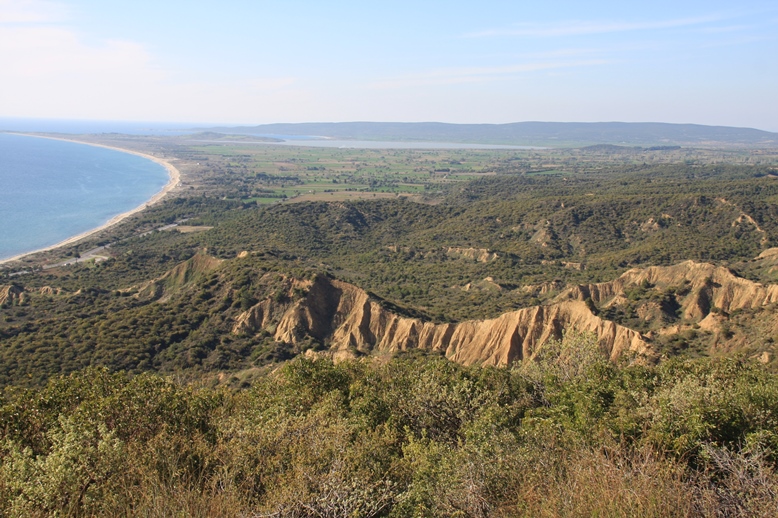