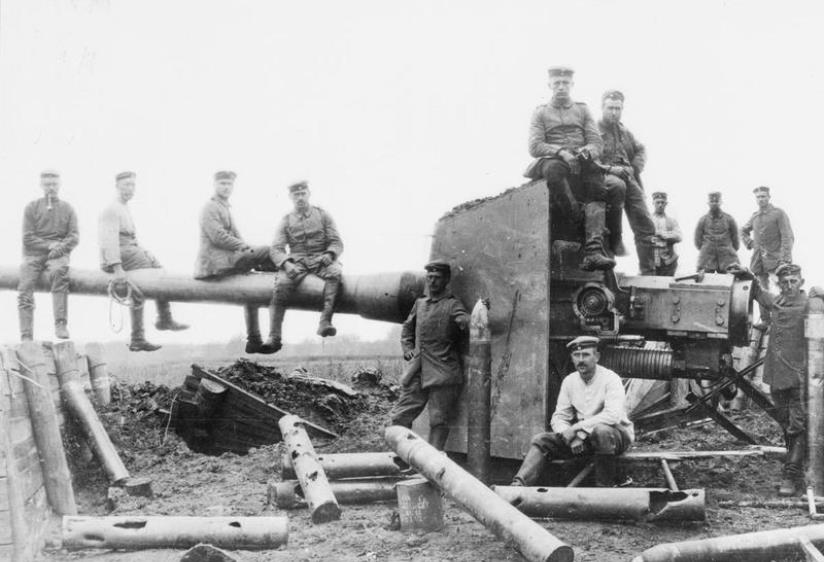 Above: German soldiers inspect a captured Russian naval gun among the defenses of Kovno

Over the last eleven days, four German divisions have invested the Russian fortress complex at Kovno, Lithuania with the heaviest guns in the arsenal. Drawn to the front on a purpose-built railroad, the largest of these was the 42-centimeter Gamma Mörser, which throws a one-ton shell nearly nine miles but requires a concrete pedestal. The tremendous artillery fire reached its crescendo three days ago, killing one thousand Russians inside the fortress, but the defenses did not begin to break until the next day, when the Gamma Mörser shattered First Fort. Yesterday, Second and Third Fort fell to German attacks, and today the Russian resistance collapses in a daisy-chain of defeat.

The defending force of 90,000 is new to the garrison, and while they are familiar with its interior, they are far less familiar with the exterior. This has resulted in command and control inefficiencies that only get worse with the bombardment, which cuts telephone lines — and cuts off whole units from their artillery support. Russia expects her fortresses to cover the ‘Great Retreat‘ of her Army, but they are instead proving highly vulnerable to encirclement and destruction, making an already-humiliating situation even more embarrassing. 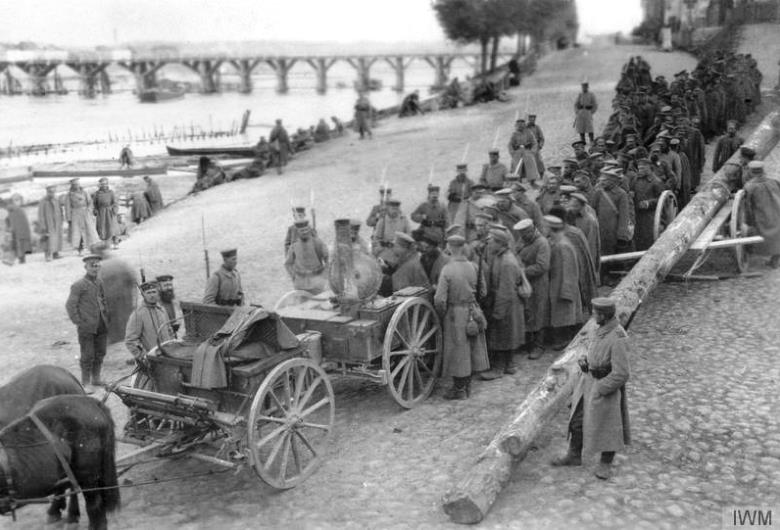 Russian prisoners being fed from a German field kitchen before they are marched off to their camp. Note the guards with bayonets

As Fourth and Fifth Fort fall today, General Vladimir Grigoriev abandons his post, fleeing twenty-five miles east. He will later be arrested, tried, convicted, and sentenced to fifteen years in prison, with all of his honors and awards stripped away as punishment for desertion in the face of the enemy. Yet it is not clear what difference Grigoriev would have made, for the defeat is total by the afternoon, with Russian units surrendering or retreating en masse. German troops cross the Nemunas River, capturing Sixth and Seventh Fort, completely taking the entire fortress complex as night falls, claiming the last 20,000 defenders as prisoners. It is a military catastrophe, but Grigoriev is merely the most convenient scapegoat at hand.

The Grand Duke Nicholas Nikolaevitch also shares public blame for the capitulation. In fact, the loss of Kovno is a harder blow to Russian prestige than the loss of Warsaw, which was the jewel in the Tsar’s European crown. Quoting a letter received from Petrograd and postmarked on the 20th, Polish Princess Catherine Radziwiłł describes a widespread despair — and rampant, ugly rumors eroding the people’s faith in their monarch.

The pessimists, who prophesied that no good could ever result from the Grand Duke being in supreme military command, rejoice to see their prognostications verified, but even they forbear from indulging in the usual ‘I told you so’ dear to the human heart. The situation is felt to be far too serious for vain boasting.

[…] The nation does not differentiate between a retreat executed in perfect order, as ours has been, and a flight. It easily mistakes the one for the other, and its intelligence fails to grasp how it comes about that, after we have been assured all along that our territory was secured against any invasion of the enemy by a line of fortresses so strong that no army in the world could possibly take them, this line, the erection of which had cost so much money, was suddenly pronounced to be worth nothing at all — to constitute, indeed, a danger for our troops had they remained.

The impression that lies have been told is possessing the mind of the public, which begins to say definitely that somebody has been guilty of systematic deceit. It is a thousand pities, because once the confidence of the nation in its leaders is shaken it will not respond with the one-time readiness to future appeals to its spirit of self-sacrifice and devotion.

[…] It is now that the mistake made from the very beginning of confiding the supreme command to a member of the Imperial family becomes apparent in all its nakedness.

It would have been easy to punish any Commander-in-Chief of lesser birth, but with a Grand Duke this could not be thought of.  A certain portion of Petrograd society is clamouring for the dismissal of the Grand Duke Nicholas, and curious stories are related concerning his growing unpopularity among the army, his tyrannical character and general recklessness; but either these stories do not reach Tsarskoye Selo, or the Sovereign is afraid of deposing a relative quite capable of resisting his authority.

Indeed, Russia is practically awash in conspiracy theories as domestic political elements look to increase their own power at the expense of the royal family. Today’s lost fortress thus provides one more important push downhill towards revolution and chaos. 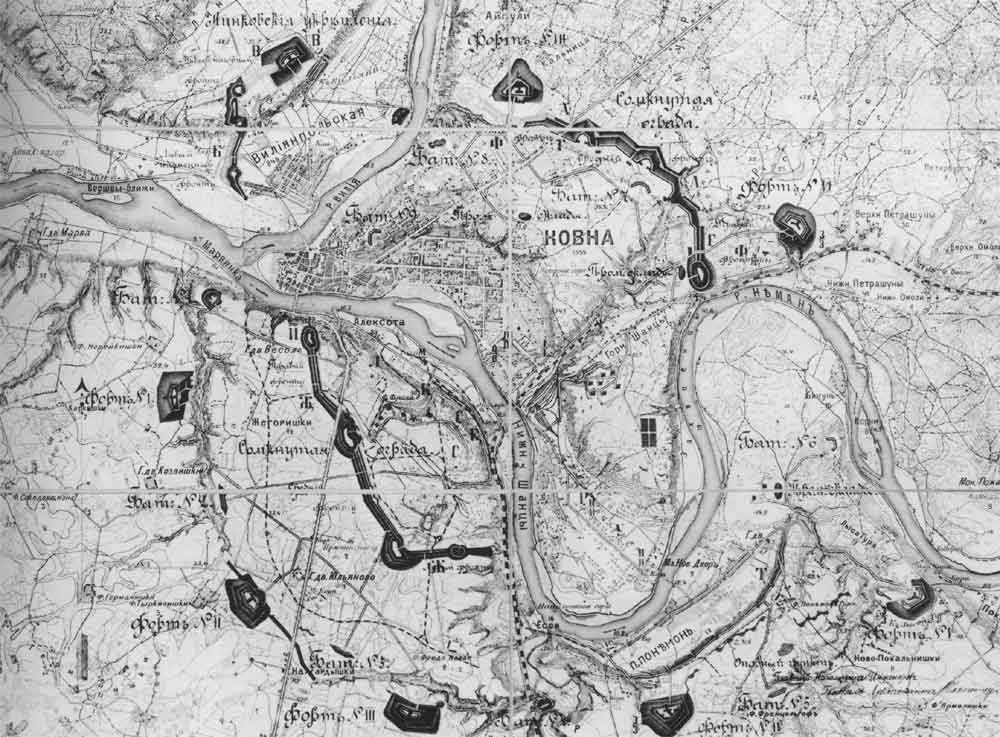 A map of Kovno Fortress shows the inner and outer ring of forts, with the Nemunas River flowing through the old town

The Russian Army is in a state of material collapse, unable to provide its formations with enough rifles or grenades or shells, and the retreat is only making that situation worse. Germans will continue to use the fortress, and its mountains of equipment, against the former occupants for the rest of the conflict. Now known as Kaunas, Kovno is to become an important German base for the war in the Baltic region. 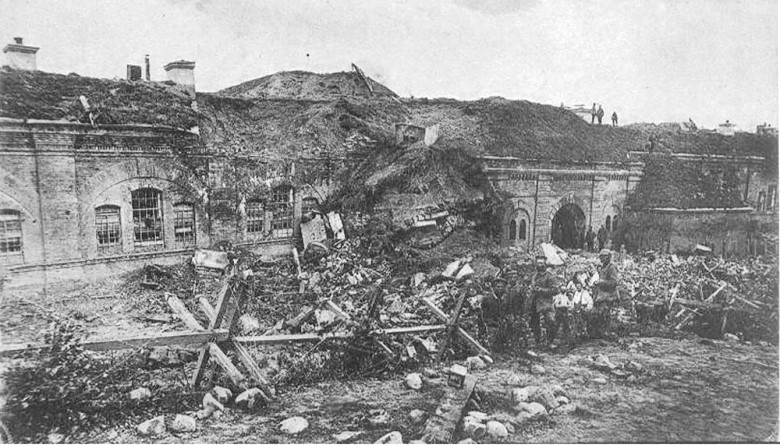 Damage to Second Fort. More than 1,300 artillery guns are captured along with large supplies of ammunition