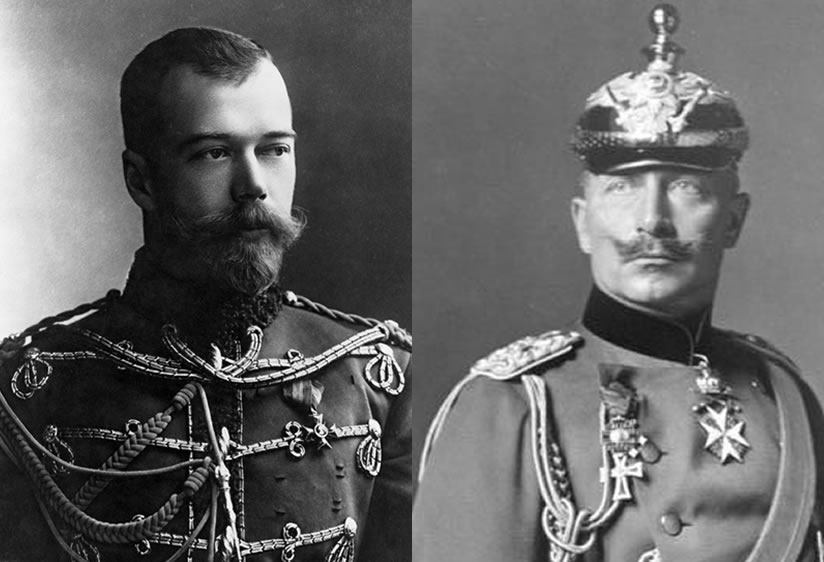 Today is the first anniversary of the German Kaiser’s declaration of war against Russia, setting the Schlieffen Plan in motion. Made aware of the German high command’s radio warning to all German ships at sea by the listening station at the Eiffel Tower, yet unaware of the Schlieffen Plan, French supreme commander Joseph Joffre demanded immediate mobilization to attack Germany from the west. From that moment, there was no turning back, and so even though the first shots in the conflict had already been fired, Russia and France and Germany see today as the proper moment for commemoration.

From Petrograd, Tsar Nicholas II issues a proclamation to the Russian people. Printed in every newspaper across the largest empire on the planet, it is also meant to reassure his allies that the ongoing breakdown of his army in Poland is merely a temporary setback rather than a revelation of Russia’s ominous internal weaknesses.

For a year the enemy has been threatening the freedom of the world. We deeply appreciate the self-sacrificing aid which our allies have been exerting to maintain a combined pressure upon the foe on all sides. We feel confidence in ultimate victory, in the community of interests among the Allies, and in final triumph over our remorseless enemies. This confidence fires the spirit of our nation; it has been our guiding star through the year of awful bloodshed, and it will serve to sustain us in the months — it may be years — of the terrible struggle that lies before us. Russia greets her allies. She hails their heroic loyalty, which has moved them to stand by her to the end.

Despite your efforts, which have covered our flag with fresh glory, the enemy are not yet broken. We must not lose heart, but must face the new sacrifices and trials necessary to lead Russia to success. Painful trials have often been sent to our country, but every time we have emerged with new strength and power.

Acknowledging the war will not be short, the Tsar’s message nevertheless conceals a burgeoning crisis within his regime. Having failed to solve Russia’s problems of material production and procrastinated in the replacement of his incompetent War Minister, Nicholas is now receiving much heat from foreign and domestic allies over the continued defeats in Poland and Galicia with his cousin Nicholas Nikolaevich, the Grand Duke. Before the month of August is over, the Tsar will take personal charge of his army, leaving no political insulation in place when the army fails in the future. Just as the path to war was made certain a year ago, this decision will lead inexorably to collapse and revolution. The trials yet to come are simply too painful for his dynasty to survive.

Simultaneously today, Kaiser Wilhelm II of Germany issues an anniversary proclamation of his own.

A year has passed since I had to call the German people to arms. A period more sanguinary than any hitherto has come over Europe and the world. My conscience is pure before God and history: I have not willed the war. After a decade of preparation, the union of powers for whom Germany had become too strong, thought that the moment had come to humiliate the Reich, which loyally stands by its ally Austria-Hungary in its just cause, or to crush in in an all-powerful ring.

It was not lust for conquest that drove us into the war, a fact which I proclaimed a year ago. When in those days of August all men fit for military service rushed to the colors and the troops marched to the struggle of defense, following the example set by the unanimous vote of the Reichstag, every German on the earth felt that he had to fight for the supreme good of the nation, for life and liberty. What we had to expect if a foreign power had succeeded in determining the fate of our people and of Europe the afflictions of my loved province of East Prussia have proved. The consciousness of the struggle forced upon us has brought about the miracle — political conflicts subsided and former enemies began to understand and to appreciate each other. All fellow-men were imbued with the spirit of loyal comradeship.

But Germany is no more monolithic than any other society at war, and indeed a small item in the Zeitung takes note of a dissenting voice being silenced.

Klara Zetkin arrested. The Forward reported that a member of the Liebknecht group, Socialist writer Clara Zetkin, was arrested in Stuttgart and had been transferred to Karlsruhe. About the reason for the arrest, the newspaper only speculates, but suspects that it could the “action against the alleged disseminator of the Resolution of the Bern Women’s Conference.”

Indeed, Zetkin not only attended the International Socialist Women’s Conference in Switzerland this March, but actually organized it, and has been imprisoned for distributing copies of the manifesto which its twenty-nine delegates produced. Her document flatly blames capitalism for creating and exacerbating the conflict, calls upon the women and working classes of the combatant nations to rise against their masters, and dismisses notions of shared sacrifice between the high and the low.

Ignoring all opposition, the Kaiser praises divine forces for the ongoing stalemate in the west and the advantage gained in the east — and then remarks on the new relationship of scientists, engineers, and economists to the state, a trend that is universal among all belligerents, as if it were unique to his own society.

Full of thanks, we may say today: God has been with us. The hostile armies which boastfully promised to march to Berlin in a few months have been driven far back to the West and East with mighty blows. Numerous battlefields in various parts of Europe, sea struggles remote and near, testify what German wrath and German military science are able to do in self-defense. No violation of international laws by our enemies could shake the economic foundation of our warfare. State and community, agriculture, industry and commerce, science and technique vie with one another to soften the calamities of war. Full of understanding for the necessity of interference in free commerce, entirely devoted to the care of our brothers afield, the population at home did its utmost to ward off the common danger.

With deep gratitude the Fatherland thinks today and forever of its soldiers, of those who face the enemy undaunted by death, of those who return wounded or ill, of those in particular who rest in foreign soil or at the bottom of the sea, weary of the struggle. Like the mothers and the fathers, the widows and the orphans, I mourn for the beloved ones who have died for the Fatherland.

Internal strength and unified national will in the spirit of the creators of the Reich warrant a victory. The dikes, which they have built anticipating that we should some day have to defend what we won in 1870, have braved the greatest flood of world history. After these unparalleled proofs of personal ability and national vigor, I entertain the cheerful confidence that the German people, sustaining the chastenings of the war, will vigorously march forward upon the well-tried, old path and the new course of civilization we have ardently embarked upon.

But Germany’s ‘war effort’ has been imperfect, too. Convinced that there were too many pigs on German farms eating too much grain, in January his government ordered the slaughter of millions of them, an event known as the Swinemord. The sudden removal of their manure from the fertilizer cycle has started a cascade effect on the soil quality of German farms, leading inevitably to poor harvests and widespread hunger as the allied blockade clamps down ever-harder on his nation. The great fleet Wilhelm built has invited British intervention, cutting him off from his colonies and his empire’s vast commercial interests, but now sits uselessly in harbor while British and French ships choke the sea-lanes which once fed his people and his factories. His regime is just as doomed as the Tsar’s, though it will take a bit longer. 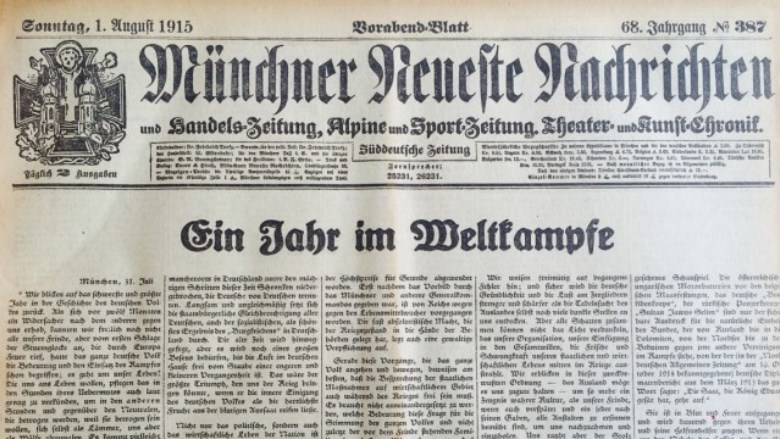