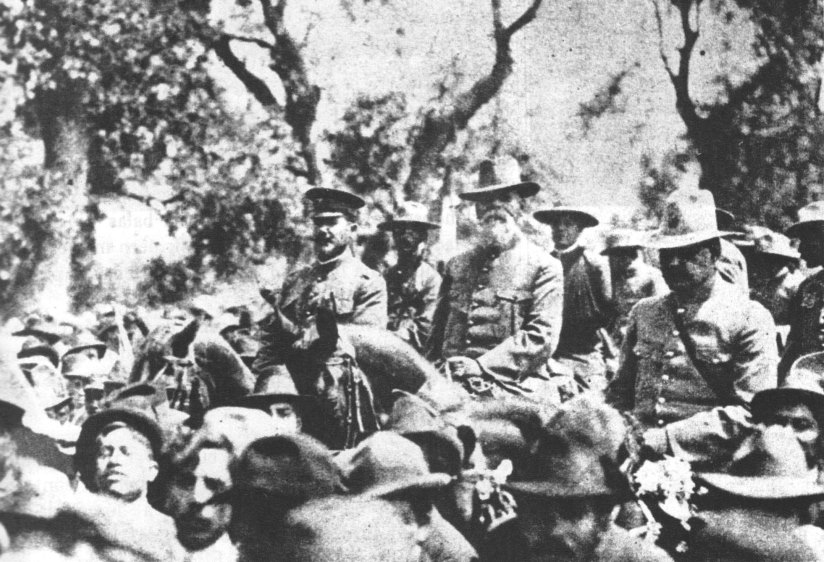 Today, the US State Department recognizes José Venustiano Carranza Garza as the legitimate head of state in Mexico. Seen above marching into Mexico City during an earlier phase of the revolution alongside his military partner, General Álvaro Obregón, Carranza is a shrewd operator who has gone so far as to manipulate the Americans with a fake insurrection to achieve his objective, and today’s announcement is the reward for his months of patient chicanery. Opposed to dealing with Carranza, US Secretary of State Robert Lansing‘s distrust has been overruled by President Woodrow Wilson, who sees no good alternative and simply wants to end the chaos south of the border. Writing to the Mexican government next May, Lansing calls attention to the situation as it existed this September:

(T)he frontier of the United States along the lower Rio Grande has been thrown into a state of constant apprehension and turmoil because of frequent and sudden incursions into American territory and depredations and murders on American soil by Mexican bandits, who have taken the lives and destroyed the property of American citizens, sometimes carrying American citizens across the international boundary with the booty seized.

American garrisons have been attacked at night, American soldiers killed, and their equipment and horses stolen.  American ranches have been raided, property stolen and destroyed, and American trains wrecked and plundered.

The attacks on Brownsville, Red House Ferry, Progreso Post Office, and Las Peladas, all occurring during September last, are typical.  In these attacks on American territory, Carranzista adherents and even Carranzista soldiers took part in the looting, burning, and killing.

Lansing is somewhat overstating the case, for much of the violence and criminality are just the result of revolutionary chaos and a disrupted economy, while the evidence of Carranza’s indirect involvement in incidents like yesterday’s train derailment and robbery near Brownsville is far murkier than the Secretary asserts. Furthermore, as 1916 begins Carranza’s rival Pancho Villa is attracting all the attention of the gringos, and the main worry driving American policy in Mexico is German influence. Concern on that score has grown in Washington all year; denying Berlin a power base in the New World has become one of the Wilson Administration’s primary foreign policy objectives. Responding to reports of sabotage plots being carried out in the United States, Treasury Secretary William McAdoo tapped German and Austrian diplomatic telephones in Washington and New York during February, giving President Wilson unprecedented insight into the scheming and neutrality violations of the Central Powers. His decision to recognize the Carranza regime is made with clear eyes and sober judgment, for there simply are no better alternatives in sight. 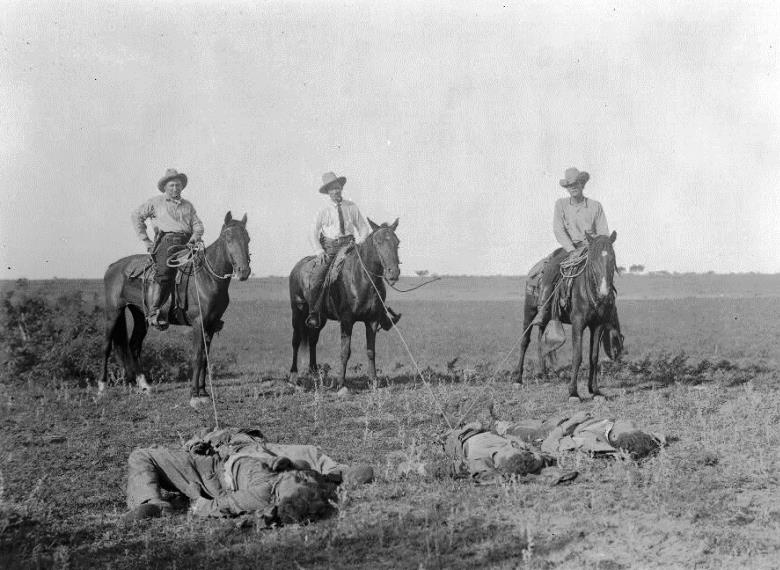 Taken today, Texas Rangers show three of the four Hispanic suspects lynched in response to yesterday’s Brownsville train attack. Captain J. M. Fox is mounted on the left. From the Robert Runyon Photograph Collection at the University of Texas at Austin

Even the law is lawless in Texas. During 1915, Texas Rangers shoot or lynch scores of American citizens in a horrific wave of police violence. During September, for example, Rangers killed Jesus Bazan and his son-in-law Antonio Longoria without trial near Edinburg on mere suspicion of their involvement in a ranch raid. Today, Rangers arrest ten Mexican Americans living near the Tandy Ranch and hang four, spurring Cameron County sheriff’s deputy John Peavey, who has tracked the bandits to their river crossing and knows these victims to be innocent, to declare the scene “an ugly and grim sight. I had seen things like this before but to me it still seemed cold and cruel.” By the end of the day, six more men living in the area have been shot by Rangers and an undisciplined posse of Anglo civilians as revenge for the attack on the Brownsville train, but these extrajudicial murders miss their mark. Two days later, a raid on the US Army outpost at Ojo de Agua Ranch kills a sergeant; four days after that, fire on an outpost at Olmito claims another soldier’s life. Spurring further retributions against Hispanic citizens, these incidents mark a spiral of racial violence that will continue until 1920, claiming hundreds — some say thousands — of lives. 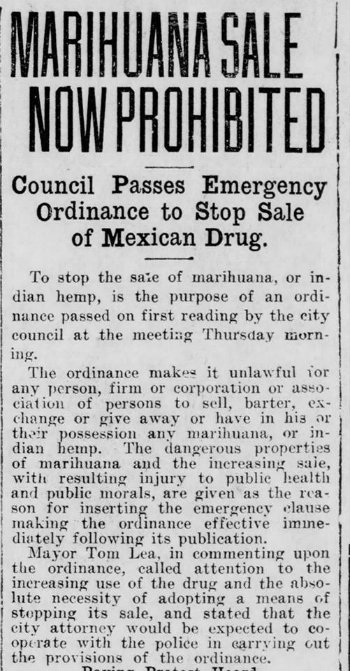 The El Paso Morning Times reporting on the new law in its June 4, 1915 edition

If some of this sounds remarkably familiar, consider the story of Stanley Good. Short, wiry, and bespectacled, he is hardly our vision of the daring deputy, but his op-eds to the El Paso Morning Times this year have led to a new local ordinance against a naturally-growing plant that is said to turn Mexican men into violent monsters.

The most atrocious crimes which have come under the notice of the local police and sheriff’s departments have been attributed to mari juana [sic] fiends. One under its influence is devoid of fear and as reckless of consequences or results. There are instances where the drug crazed victim has been placed in jail, but in many cases officers have been compelled to slay the fiend in order to save their own lives.

While El Paso is not the first American locality to prohibit marijuana — both California and Utah have recently passed legislation against ‘Mexican weed’ — Good’s propaganda continues to resonate a century later, for law enforcement apologists are still using his theme of transformation to excuse their shooting, abuses, and murder of minority citizens. ‘The suspect turned into a monster’ and ‘he bulked up against the bullets’ remain standard templates for police apologists, while alleged drug use is still cited to mitigate even the most egregious and brazen acts by police. Of course, Good did not invent this particular myth himself, for newspapers have been complicit in sensationalizing and popularizing these stories for a long time. Consider this January 2nd El Paso Herald report of a violent encounter between two Americans and a Mexican in Ciudad Juárez, across the Rio Grande:

Marihuana, that native Mexican herb which causes the smoker to crave murder, is held accountable for two deaths and a bloody affray on the streets of Juarez Wednesday afternoon. Crazed by continual use of the drug, an unidentified Mexican killed a policeman, wounded another, stabbed two horses and pursued an El Paso woman and her escort, brandishing a huge knife in the air. The man finally was shot and pounded into insensibility. […] Marihuana has a more dreadful effect than opium, creating in its victim hallucinations which frequently result in violent crimes.

While the story admits the matter of drug use is just hearsay, it is a good example of how ‘yellow journalism‘ has undoubtedly inflamed racial animosities in America and helped propel a new wave of prohibitionism. Nor can we truly claim a century afterwards that the United States has ‘progressed’ very much beyond these events, which are barely mentioned in our anodyne history books. With the border region more militarized than ever before, and a century’s worth of ever-tougher drug laws empowering law enforcement to act like criminals, it is arguable that we still live in the era that was being created, and that our modern news organizations are no better at helping us to understand or manage the complexities of a sometimes-hostile world. In a very real way, we are still this America.

Soldiers of the 2nd or 3rd Texas Infantry, National Guard, stationed in Harlingen during 1915. A federal response was made necessary by the inability of Texas Rangers and local police to conduct investigations or interdict bandits