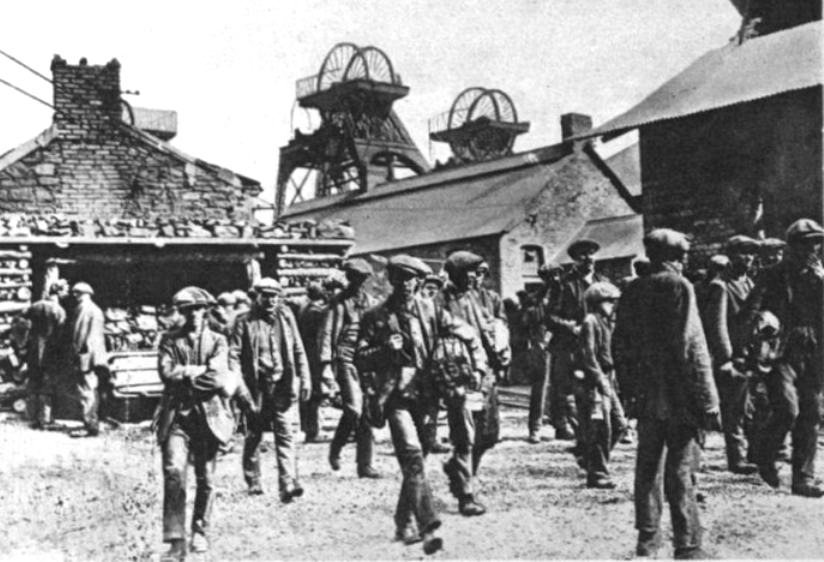 The war doesn’t prevent coal mine owners from demanding repeal of the eight-hour day, cancelling workers’ vacations, and taking steps to enforce higher productivity while trying to cut wages even as prices rise dramatically. In fact, the capitalists clearly see the Great War as an opportunity to push their industry backwards in history while improving their already-bloated profit margins. Before the war, a ton of Welsh coal shipped to Genoa, Italy cost seven shillings; by the end of 1915, the same ton of coal will cost seventy-five shillings, and the mine owners don’t care to share a penny of those profits with their workers if they don’t have to.

As a result, today a conference of miners in Cardiff rejects labor proposals by the Board of Trade acting under its wartime authority. Their issues with management predate the conflict, and the miners have been working without a contract since the beginning of April. Heedless of their own leaders, a majority of whom agree to the suggested concessions, 200,000 rank-and-file miners overwhelmingly vote to ‘down tools’ rather than accept the government’s terms of settlement. Tomorrow, with coal mines shutting down all across South Wales, Parliament approves the Munitions Bill which bans all strikes for the duration of the war, and a Royal Proclamation applies the bill to the miners, but they remain adamant and refuse to go back to work.

By the 15th of July, the entire region is practically at a standstill. Because British coal feeds the furnaces and railroad engines of her friends and allies as well as the ships of her own Navy, this work stoppage is the single greatest threat to the ‘war effort’ against the Central Powers since the conflict began. 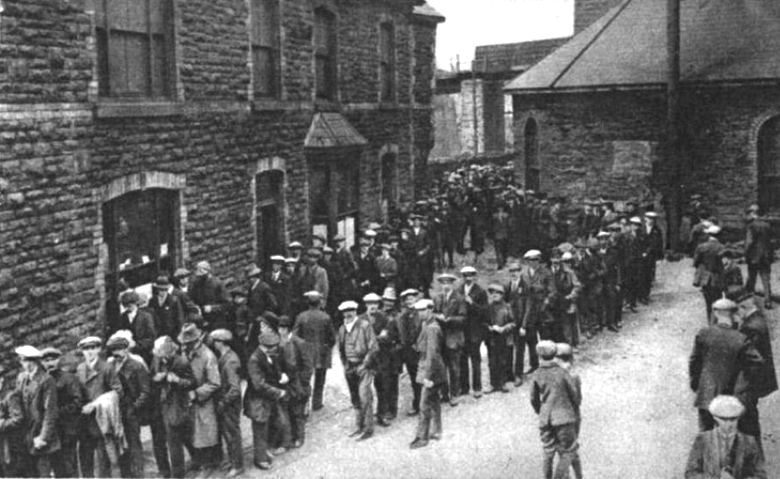 Miners line up to receive wages this week, their faces and clothes unusually clean from not having worked in the mines

Britain is not alone in facing problems related to its national coal industry, for the Great War is rapidly changing the laissez-faire habits of government among all the combatants as they resort to greater and greater levels of market intervention to resolve the failures of free market systems that are ill-adapted for the pressing needs of war. In another case of parallel development, today the German government decrees that the states of the empire may syndicalize the coal industry, with prices set by the Minister of Finance, because the nation’s mine owners have failed for months to agree on a plan to replace the voluntary Rhenish-Westphalian Coal Syndicate. Even this threat fails to completely cow the industrialists, however, for they will not succeed in forming their own syndicate until October 1916.

Of course, there are some who see the conflict as an opportunity for radical reorganization of not just industries, but all society. Rejecting nationalization as “changing masters,” mining organizer W.F. Hay wants to extend revolutionary trade unionism throughout the economy, putting workers in control of the means of production. Co-author of the famous 1912 pamphlet The South Wales Worker, shortly after the war’s outbreak Hay published War and the Welsh Miner to declare that the conflict offered nothing for the working class, calling war “the sport of kings, the hired assassin’s trade.”

These words have not gone unnoticed in London. In fact, the mine owners have repeatedly warned Prime Minister Asquith that the Welsh coalfields were turning into a breeding-ground of dangerous radicalism, and he has been both deeply impressed and concerned by the pamphlets that worker representatives have given him in recent years.

On the 19th, Minister of Munitions David Lloyd George is dispatched to Cardiff with instructions to settle the matter quickly. A son of Wales himself, Lloyd George is surely the best man in the country for the job, and with his plenipotentiary powers he forces an 18.5% raise on the employers — less than the 20% demanded by workers, but far more than the capitalists would have agreed to on their own. It is enough: the workers quickly vote to accept, and the strike is over by the 24th. 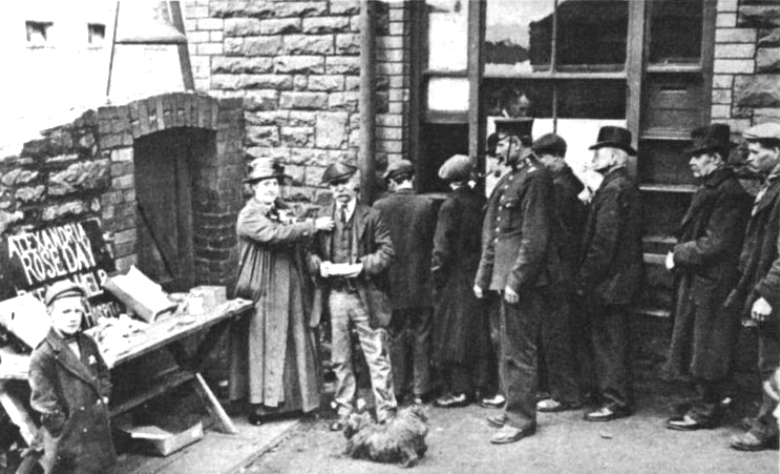 Workers in Pontypridd line up to buy flowers for charity during Alexandra Rose Day on the 17th. Via Illustrated War News