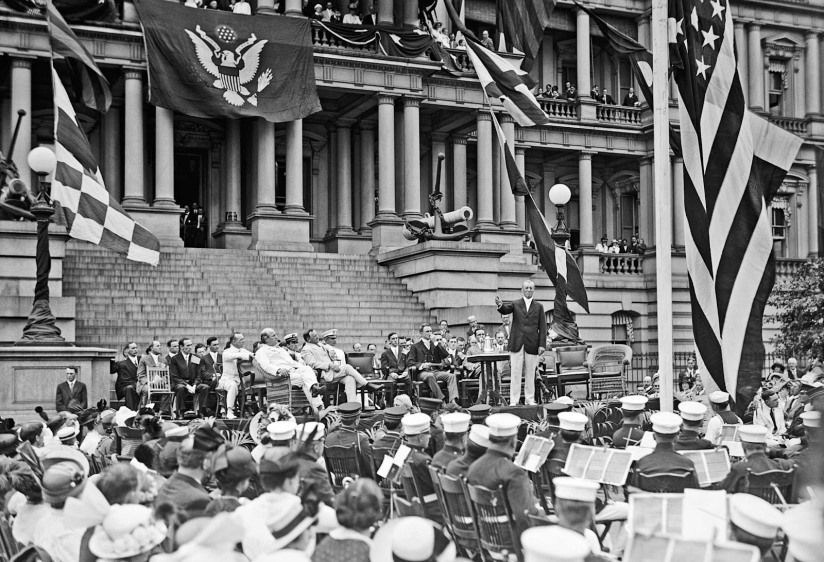 Below is President Woodrow Wilson’s Flag Day speech delivered a century ago today before the US Treasury building. A subtle but seismic shift has taken place in US-German relations since the sinking of the Lusitania five weeks ago, spurring the resignation of Wilson’s Secretary of State, who can sense the inevitability of America joining the conflict. In addition to the Kaiser’s policy of unrestricted U-boat warfare, Germany is conducting a covert campaign of espionage and sabotage in the United States, including efforts to turn strife-torn Mexico against her northern neighbor. The Great War is sundering the domestic politics of neutral nations far away from the battlefield, and the United States are no exception to this rule. Knowing his country is hardly prepared to fight a modern war, Wilson intends today’s patriotic observance to begin the difficult job of making America ready — an idea that will become known as Preparedness.

I know of nothing more difficult than to render an adequate tribute to the emblem of our nation. For those of us who have shared that nation’s life and felt the beat of its pulse it must be considered a matter of impossibility to express the great things which that emblem embodies. I venture to say that a great many things are said about the flag which very few people stop to analyze. For me the flag does not express a mere body of vague sentiment. The flag of the United States has not been created by rhetorical sentences in declarations of independence and in bills of rights. It has been created by the experience of a great people, and nothing is written upon it that has not been written by their life. It is the embodiment, not of a sentiment, but of a history, and no man can rightly serve under that flag who has not caught some of the meaning of that history.

Experience, ladies and gentlemen, is made by men and women. National experience is the product of those who do the living under that flag. It is their living that has created its significance. You do not create the meaning of a national life by any literary exposition of it, but by the actual daily endeavors of a great people to do the tasks of the day and live up to the ideals of honesty and righteousness and just conduct. And as we think of these things, our tribute is to those men who have created this experience. Many of them are known by name to all the world — statesmen, soldiers, merchants, masters of industry, men of letters and of thought who have coined our hearts into action or into words. Of these men we feel that they have shown us the way. They have not been afraid to go before. They have known that they were speaking the thoughts of a great people when they led that great people along the paths of achievement. There was not a single swashbuckler among them. They were men of sober, quiet thought, the more effective because there was no bluster in it. They were men who thought along the lines of duty, not along the lines of self-aggrandizement. They were men, in short, who thought of the people whom they served and not of themselves. 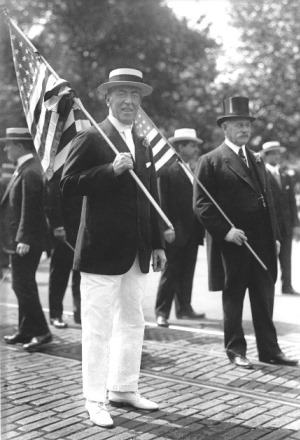 Wilson will call for a general observance of Flag Day in 1916, but it is still not an official holiday

But while we think of these men and do honor to them as to those who have shown us the way, let us not forget that the real experience and life of a nation lies with the great multitude of unknown men. It lies with those men whose names are never in the headlines of newspapers, those men who know the heat and pain and desperate loss of hope that sometimes comes in the great struggle of daily life; not the men who stand on the side and comment, not the men who merely try to interpret the great struggle, but the men who are engaged in the struggle. They constitute the body of the nation. This flag is the essence of their daily endeavors. This flag does not express any more than what they are and what they desire to be. As I think of the life of this great nation it seems to me that we sometimes look to the wrong places for its sources. We look to the noisy places, where men are talking in the market place; we look to where men are expressing their individual opinions; we look to where partisans are expressing passion: instead of trying to attune our ears to that voiceless mass of men who merely go about their daily tasks, try to be honorable, try to serve the people they love, try to live worthy of the great communities to which they belong. These are the breath of the nation’s nostrils; these are the sinew of its might.

How can any man presume to interpret the emblem of the United States, the emblem of what we would fain be among the family of nations, and find it incumbent upon us to be in the daily round of routine duty ? This is Flag Day, but that only means that it is a day when we are to recall the things which we should do every day of our lives. There are no days of special patriotism. There are no days when we should be more patriotic than on other days. We celebrate the Fourth of July merely because the great enterprise of liberty was started on the fourth of July in America, but the great enterprise of liberty was not begun in America. It is illustrated by the blood of thousands of martyrs who lived and died before the great experiment on this side of the water. The Fourth of July merely marks the day when we consecrated ourselves as a nation to this high thing which we pretend to serve. The benefit of a day like this is merely in turning away from the things that distract us, turning away from the things that touch us personally and absorb our interest in the hours of daily work. We remind ourselves of those things that are greater than we are, of those principles by which we believe our hearts to be elevated, of the more difficult things that we must undertake in these days of perplexity when a man’s judgment is safest only when it follows the line of principle.

I am solemnized in the presence of such a day. I would not undertake to speak your thoughts. You must interpret them for me. But I do feel that back, not only of every public official, but of every man and woman of the United States, there marches that great host which has brought us to the present day; the host that has never forgotten the vision which it saw at the birth of the nation; the host which always responds to the dictates of humanity and of liberty; the host that will always constitute the strength and the great body of friends of every man who does his duty to the United States.

I am sorry that you do not wear a little flag of the Union every day ‘instead of some days. I can only ask you, if you lose the physical emblem, to be sure that you wear it in your heart, and the heart of America shall interpret the heart of the world. 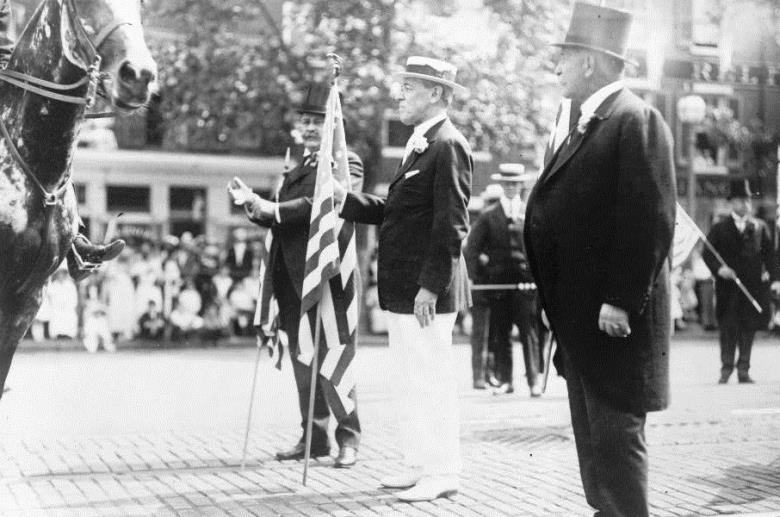 Wilson during Preparedness Day in 1916. Military reforms were overdue and essential for the Army, Navy, and reserves to be ready