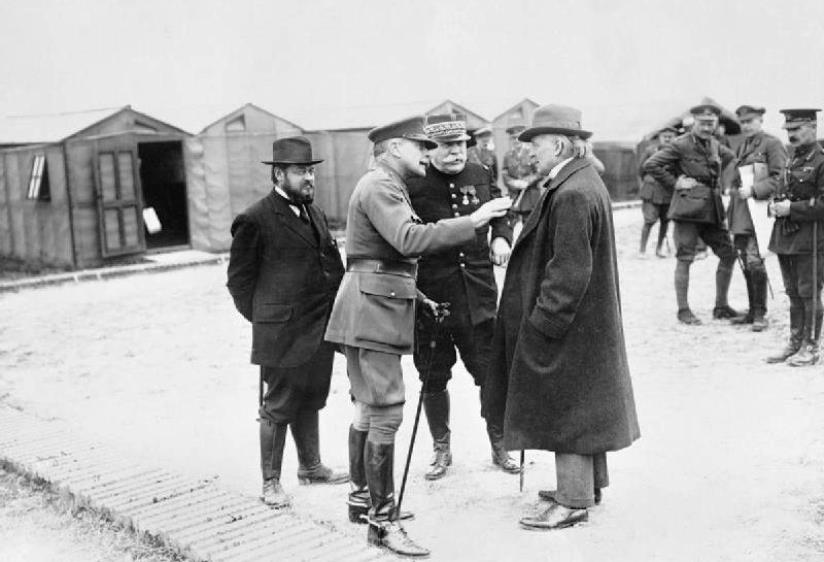 The above photo is one of my favorite images of the Great War. Taken in 1916, it shows British Minister of Munitions David Lloyd George on the right, with French Minister of Munitions Albert Thomas on the left. In between, French supreme commander Joseph Joffre and British theater commander Douglas Haig both look to Lloyd George for a solution to their problems. Their spontaneous interaction says much about the true shape of the allied ‘war effort,’ for British factories will do the lion’s share of weapons and ammunition manufacturing over the course of the conflict just as Frenchmen will do the bulk of the dying.

Arriving today at “a frowsy room at a second-rate hotel” in the Channel port city of Boulogne, Minister Lloyd George aims to reach a consensus on production goals for a successful offensive operation on the Western Front. He needs ballpark figures on the necessary numbers and calibers of guns as well as the quantities and types of ammunition. Furthermore, he wants the alliance partners to stop competing for the same supplies of critical raw materials in the global marketplace, allowing manufacturers to play them off against one another for maximum profits and holding one another back with controls on key exports.

The price of picric acid was forced up by the demands of the French, and the whole metal and machinery market was deranged owing to the activity of certain people acting for Russia. Even amongst the Allies themselves there was no efficient system of controlling purchases and no coordination. France, for example, could not obtain export licences for coke from this country; and whilst demanding shell steel from us, suddenly stopped the export of ferrosilicon.

Tomorrow, Undersecretary Thomas arrives in Boulogne with General Gossot of the French War Office and a young Colonel named Walch from the Headquarters Staff. Recalling the scene afterwards in his memoir of this time at the Ministry of Munitions, Lloyd George is dismayed when Joffre’s personal representative, General Du Cane, expresses a magical faith in France’s main 75 millimeter field gun — a blinkered vision that reflects his own War Ministry’s bizarre confidence in shrapnel shells to solve every tactical problem. Luckily, one of the new arrivals is unafraid to challenge orthodoxy.

I was convinced that with them shrapnel was not a necessity of war but had become a point of honour. They felt that they could not desert it without a reflection upon their own prevision and patriotism…I had to contend not with a profession but with a priesthood devoted to its own chosen idol.

[…] General Gossot had not much, if any, experience at the front in this war, and his ideas were purely historic. On the other hand, Colonel Walch had been a kind of artillery liaison officer, and in that capacity he had seen the French and German artillery in action from Switzerland up to the British lines, and he had observed with scientific care and accuracy the results produced by the different kinds of guns and shells. He was a young man not only of great intelligence but of reckless courage, for he threw over his commanding officer with some approach to contempt for his ignorance. That demands more fearlessness for an army officer than crossing no-man’s land.

Indeed, to even get a handle on the real size of the munitions problem, Lloyd George has been forced to circumvent the War Office. Minister of War Lord Kitchener has been more of an impediment to victory than a facilitator, rejecting Lloyd George’s numerical projections of gun tubes and shells for doubt that he can train enough artillery crews to handle them all. Yet the “excessive” numbers that Lloyd George takes back to London will in fact turn out to be far too low by the time the war ends. 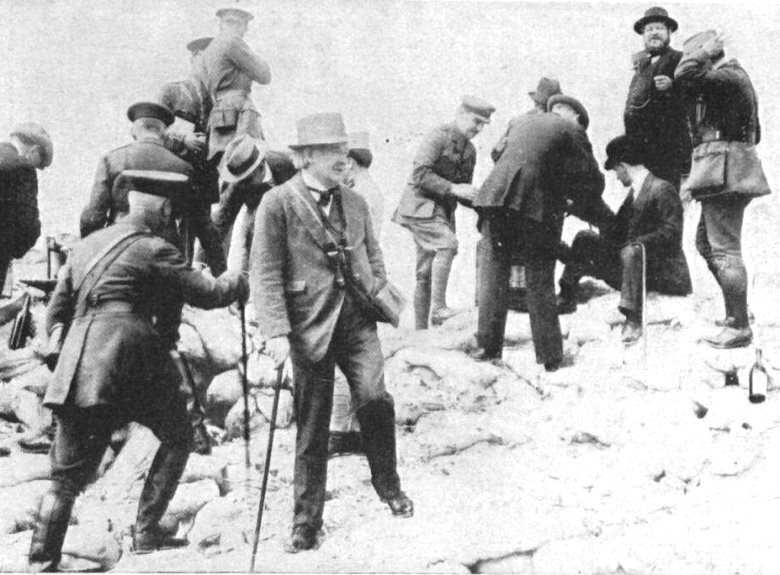 Lloyd George (center) and Albert Thomas (upper right) during a 1916 picnic lunch at the front. Via Illustrated War News

Today, a small assault takes place near Souchon. It is the last action in the Second Battle of Artois, a bloody offensive sputtering to a halt after gaining little ground for so much life. Joffre had hoped the campaign would reclaim the coal basin beyond Vimy Ridge, for most of France’s best iron and coal sites mines are occupied by Germany, but failed attacks by British and French divisions have proven that the allies lack enough heavy guns and high explosive shells to breach German defenses, allowing smaller numbers of defenders to slaughter entire infantry regiments during the attack. As a result of this meeting, the two countries will closely coordinate the design, manufacture, and delivery of a new generation of heavier artillery weapons. As the meeting ends, General du Cane privately expresses a change of mind to Lloyd George, who commends his honesty and hopes it will presage a new cooperative spirit among the military brass.

Thomas, Lloyd George’s French counterpart, is a former reserve division commander who was put in charge of the national railways during the opening weeks of the war. He was thereafter picked to organize the country’s factories in October, and promoted to Undersecretary in May; later this December, he will be promoted again to Sub-minister, then again a year later to Minister of Munitions, answering directly to the President and Prime Minister of France. But he will only serve in that capacity until September 1917, when he is replaced by Louis Locheur.

Thomas’s department has three main components. A technical office headed by three officers with experience at the front examines proposals and inventions, improving or rejecting them according to feasibility. Headed by a former shop floor worker, the industrial branch coordinates manufacturers, sets up and repurposes factories, finds and delivers equipment, and sorts through hundreds of patriotic offers for goods or services made by various companies. Finally, a military officer manages the nation’s pool of skilled munitions labor under military discipline rather than normal workplace rules. “There cannot be two kinds of treatment for Frenchmen,” Thomas declares, reflecting the new era of total warfare. “All are combatants.”

In the meantime, both men swiftly become the most powerful men in their respective countries, with direct authority over a constantly-increasing share of all economic activity. As the Ministry of Munitions official history notes in a passage that could speak for either partner in this cross-Channel relationship,

The scope of control…widened steadily and ineluctably until before the end of the war it covered practically the whole industrial life of the nation. The form of control became increasingly stringent with the progressive shortage of materials, until by the end of the war no one could start a new business or enlarge an old one except for war purposes. Everyone was liable to have buildings, plant or machinery requisitioned for more urgent work. None of the industrial metals and few raw materials could be used by anyone without Government licence. The nation concentrated all its great strength and skill on victory.

Setting out to meet their production goals in one year, the Ministers of mayhem thus start a countdown to apocalypse. The decisions made at Boulogne will make possible the massive barrages and battles during the Summer of 1916 by which we most vividly remember the Great War.

A British 9.2-inch howitzer crew firing for effect. Lloyd George sets out to vastly increase the number of these guns