Kaiser Wilhelm II authorized his Zeppelin fleet to start bombing England in January, but limited the airships from hitting London, lest they accidentally kill his relatives in the British royal family. Until a week ago, when the LZ 38 (see photo) accidentally dropped bombs on the neighborhoods of Stoke Newington and Hackney due to a navigational error, Wilhelm’s captains limited themselves to the Docklands east of Charing Cross.

Ostensibly aiming for targets of military value, their bombs have exclusively fallen on civilians so far: three year old Elsie Leggatt was one of seven to die a week ago, while tonight’s raid will kill two dozen people and injure thirty without leaving a scratch on the allied war effort. By the end of the year, the Kaiser’s airships will cause 127 deaths and 352 injuries in London alone — with Buckingham Palace and royal residences strictly ‘off-limits.’ In retrospect, we should consider Wilhelm’s Zeppelin policy as an extension of his U-boat policy, for his personal interest is driving Germany’s strategic bombing campaign.

But tonight’s attack is on France, and involves three Zeppelins: LZ 38, which accidentally bombed London; LZ 39, later to fly over the Eastern Front; and LZ 37, flown by Oberleutnant von der Hägen and eight sailors, an airship of His Majesty’s Navy on her maiden flight. Having finished their punishment of Calais, her crew are returning to base well after midnight when they spot a Morane Parasol aircraft approaching. As they react, Reginald Warneford opens fire with the machine gun mounted above his wing; the LZ 37’s gunners return fire. 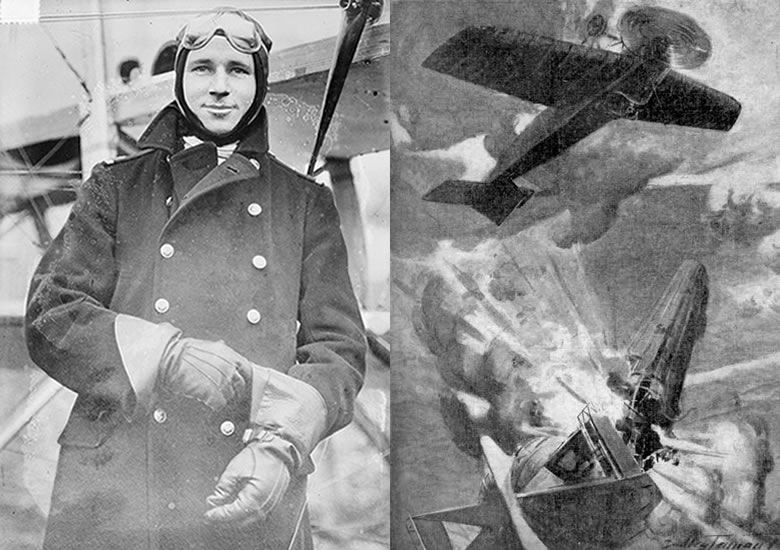 Born in India, Sublieutenant Reginald Warneford was in Canada when the war started, and swiftly became a Royal Naval Air Service pilot. His training commander predicted that Warneford would “either do big things or kill himself,” and indeed he is a daring pilot. His gunfire is ineffective against the airship’s gasbags, for Britain has yet to issue tracer and explosive rounds for air defense flight, but he is also carrying six hand-thrown Hales bombs, for his mission tonight was to bomb the Zeppelin air shed near Ghent. Climbing seven thousand feet above the Zeppelin, Warneford cuts his engine and glides in on an attack vector.

It is a daring and extremely dangerous maneuver by a pilot prone to push the envelope, but it works: not hearing his engine, the crew of the LZ 37 are surprised when his bombs detonate against the top of their aircraft. Wrapped in flames, the airship crashes into a convent school near Ghent, killing two nuns. Von der Hägen and seven sailors are killed; steering in the forward Gondola, Alfred Műhler crashes through the roof and lands in an empty bed, surviving with first degree burns and contusions. 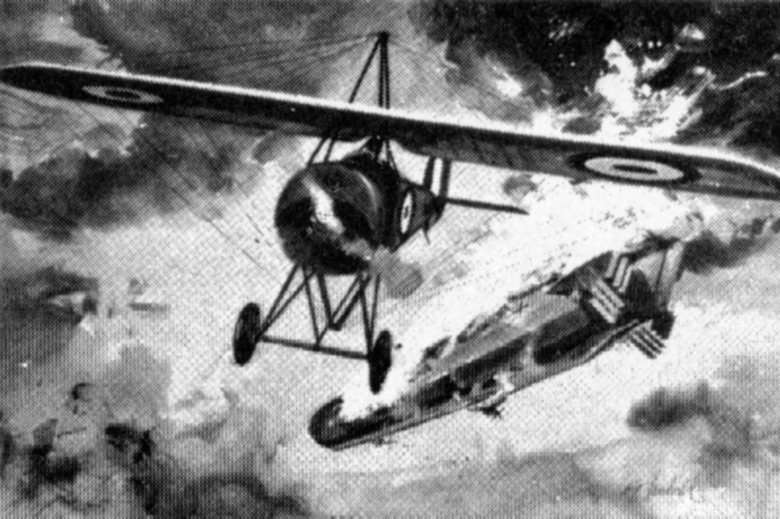 But Warneford’s  victory has also damaged his fuel line, for these early aircraft are delicate. Landing in enemy territory, he quickly repairs the damage, takes off again, and returns home to collect his Victoria Cross. Warneford has made history by becoming the first fixed-wing pilot to destroy an airship in the air, but in a classic case of parallel development, pilot Hans Ritter Fritsche von Crouenwald and gunner Gustav Klasing will destroy the Italian dirigible Città di Ferrara in their Lohner flying boat less than twenty four hours later over the Adriatic Sea.

Warneford is not happy as a hero, however — he would rather fly. Eleven days later, following a formal luncheon in celebration of his French-awarded Légion d’honneur, he offers an American journalist named Henry Beach Newman a chance to see Paris from the air as he ferries a plane to the Royal Naval Air Service base at the Belgian border town of Vuerne. As they reach altitude, the plane’s airframe suffers a catastrophic failure; the aircraft spins, dives, and throws both men out of their seats. Newman is killed on impact with the ground, and Warneford dies en route to the hospital.

Filmed, his funeral is a huge propaganda event attended by thousands of people.