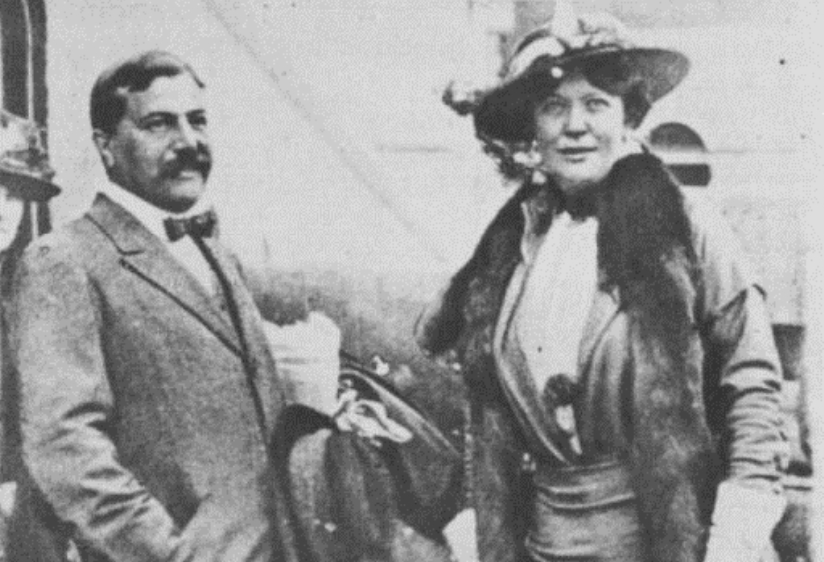 Edgar Speyer has endured enough. After months of rumors and public denunciations by an increasingly-hysterical British conservative press, today he embarks for America with his wife (see above) to leave behind everything he has built in his adopted country.

Born in New York to Ashkenazi Jews of German origin, Speyer came 28 years ago to manage the London office of his father’s financial firm. Today, he returns to the land of his birth to escape a storm of conspiracy rumors, public attacks, and questions about business and family ties. The mock Tudor mansion Speyer built on the Norfolk Coast, and his early possession of a ‘wireless’ set, have been warped by irresponsible people into fanciful tales of Speyer secretly signalling U-boats in the North Sea. Rather than being seen as a principled stand, his refusal to write a ‘loyalty letter’ to the press is being held against him. Many of his friends no longer speak to him.

Speyer’s impact on England has not been small. The key figure behind more than a decade of rapid development in London’s subway system, he is also responsible for hospitals, art galleries, and the flourishing London musical scene. His sponsorship and management of the Queens Hall orchestra and Proms music festival once inspired the founding of the London Symphony Orchestra; now, Speyer’s friendships with German composers such as Richard Strauss are under aggressive inspection by the location’s leaseholder, William Boosey, who wants to ban German music. Seeing that his mere presence now hurts his philanthropic accomplishments as well as his business ventures more than it helps, Speyer has decided to remove himself from the British Empire altogether.

Unfortunately, the Empire is not done with Speyer. From 1918 to 1922, a parliamentary committee and the Home Office will continue his persecution, affirm his “disloyalty” for rejoining pro-German family members in New York City, and strip the couple of their British citizenship.

Queens Hall, where Speyer revitalized orchestral music in London, was later destroyed during the WWII Blitz and never rebuilt

The British public did not enter the Great War with their hearts full of hate for Germans, but casualty lists, German attacks on civilians, and the burgeoning U-boat campaign against the maritime nation, as well as wartime spy fever, are generating rampant xenophobia where none had previously existed. This month has seen anti-German riots in the wake of the Lusitania’s sinking, and the anti-German pressure is so pronounced that even King George V — who steadfastly refused to accept Speyer’s resignation from his Privy Council and declared, “Let them take me first. Let me be interned before Speyer” — feels forced to de-Germanize the English nobility this month, eventually even changing the German name of his dynastic house.

To be sure, the relentless streams of government propaganda meant to inspire patriotic volunteerism play some role in the burgeoning bigotry of the British people, but jingoists and warmongers abound in a free press that still lies largely outside government control. In fact, the attacks on Speyer are decidedly political in flavor: they make much of his friendships with such controversial Liberal Party figures as Winston Churchill and the embattled Prime Minister Asquith, focusing especially on Speyer’s attendance of their wartime dinner parties, where naval deployments were reportedly discussed.

But rabid Antisemitism is the most distressing aspect to the pernicious gossip about Speyer. James Leopold Maxse, editor of the National Review, has been obsessed with “the international Jew” since 1911, and his wartime screeds decry the invisible influence of “German Jews and crypto-Jews” manipulating policy behind the scenes, especially bankers like Speyer. Maxse will continue to peddle these stereotypes with increasing vitriol until his death, long after the war, articulating prejudiced tropes that will become all too familiar within the genocidal mythology of German National Socialism. 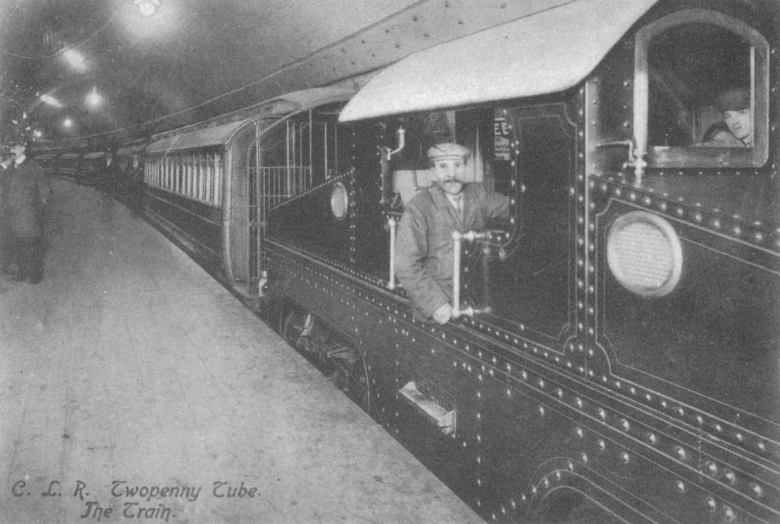 An electric engine on the Central London Railway, which Speyer bought up and improved as he established the foundation for London’s Underground and its modern integrated public transportation system

It is a peculiar fact that during the Great War, Jews around the world tend to see the Central Powers as the liberators of Eastern European Jewry from the oppression of the Russian Tsar. The Russian Army has responded with forcible deportations of suspect Jewish populations along the Eastern Front for the last several months, and Antisemitism within the Russian Army has also expressed itself as criticism of the regime. Blended with anti-German feelings, the result is a toxic mix of paranoia that helps erode the foundations of Romanov power, giving way to revolution. Britain, which has already seen Antisemitism peak with the 1911 Marconi scandal, thankfully has a more vigorous civil society and stronger democratic traditions.

But as a result of all the negative attention, Edgar Speyer will have have one more important cultural impact when author John Buchan publishes The Thirty-Nine Steps, a spy novel set just before the Great War, later this year. The character of Edmund Appleton — a retired Jewish stockbroker and German spy with multiple identities, high-level political connections, and a mansion on the coast — is quite obviously inspired by the most scurrilous accusations made against Speyer.