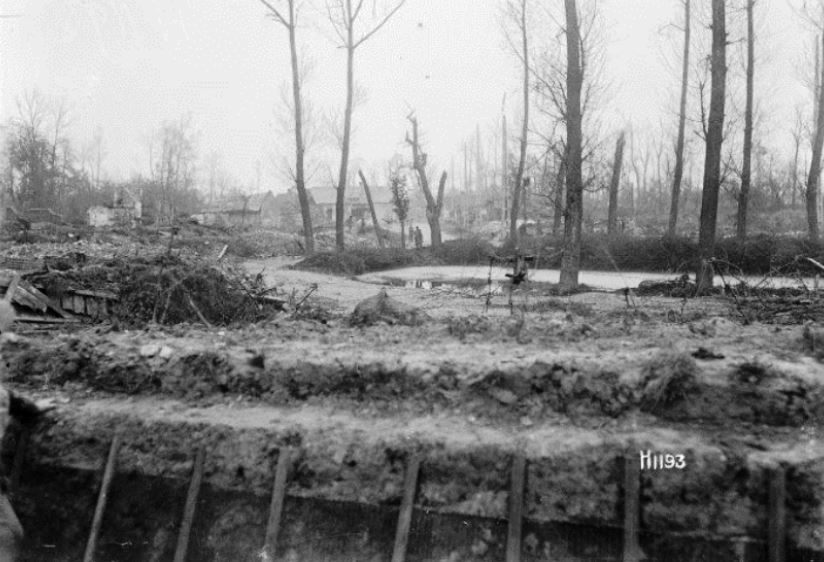 Above: Hébuterne prior to today’s battle.

At Joffre’s request, the British 2nd Army is extending its left flank today to take full responsibility for the Ypres Salient, freeing up French troops for other operations. Général Édouard de Castelnau, a major prewar booster of the attaque à outrance (literally: ‘attack to excess‘) school of offensive doctrine which has helped make the Western Front such a meat-grinder, commands his nation’s 2nd Army today in one of those alternative actions. Concentrating his forces at the town of Hébuterne, the assault aims for the village of Serre roughly three miles to the east, fighting on the battlefield in between.

Germany’s position here, which blocks French access to the railroad line between Paris and occupied Lille, is centered on Toutvent Farm and a low rise of land jokingly known to its defenders as ‘The Heidenkopf.’ After a preparatory bombardment, the defending 169th Infantry Regiment finds itself overmatched by three attacking infantry regiments, which seize these objectives and take hundreds of prisoners. 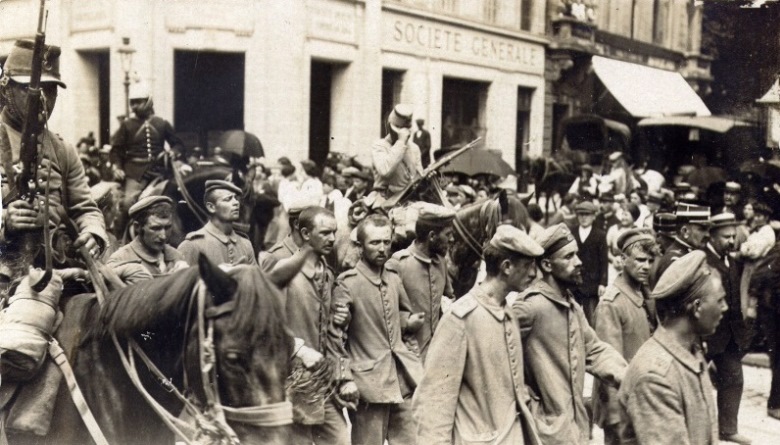 German prisoners captured near Hébuterne today being paraded through Amiens. Note the cavalry escort; this was the main tactical role for mounted troops on both sides of the Western Front for roughly 95% of the war’s duration

Tomorrow, the 64th, 65th, 75th, 118th, 135th, and 93rd Infantry Regiments take their turn. This time, however, the assault on La Louvière Farm slightly north of Toutvent fails with heavy casualties, for the Germans drop a curtain of artillery fire on the French troops throughout the day, but de Castelnau is undeterred. Even German infantry counterattacks over the next four days, including a huge assault on Toutvent Farm after which the 93rd Infantry Regiment will be decorated for its determined stand, do not give de Castelnau pause. Only the weather — foggy and wet conditions that make it hard to provide accurate artillery support for his attacks — will slow him down.

On June 11th, the 101e Brigade d’Infanterie attacks the German lines between Mailly-Maillet and Serre, with Puisieux as their ultmate objective. These men are older reservists in regiments drawn from the now-occupied cities of northern France with every reason to accept such a dangerous mission, but as Commandant Lequeux of the 243th Infantry Regiment prepares to go over the top behind an early-morning bombardment, the sight of intact German barbed wire defenses amid one thousand feet of open ground swept by machine guns gives him pause.

The attack is thus postponed for half a day, until the afternoon, so that preparatory fires can continue. But German guns open up in response, and so it is with relief that they finally get to mount the parapet and find paths of glory when they hear the buglers’ signal. French unit histories recount officers killed while leading from the front, companies ruined by fire, and close-quarters fighting with grenades and bayonets. The thousand-man 17th German Infantry Regiment and two reserve companies are annihilated, with hundreds more Germans lost as prisoners. At great cost, de Castelnau’s force storms another ingenious defensive network of saps and strong points: the legendary 137th Infantry Regiment pays such a price to push past Toutvent Farm that President Raymond Poincaré will personally cite them for valor in a ceremony on July 5th.

Altogether, a full kilometer on a 1,200-meter front between Hébuterne and Puisieux has been liberated by the end of the fourth day — roughly half a square mile. But the fight is still not done: on the 12th of June, three German counterattacks fail to dislodge the Frenchmen, whose corpses are once again piling up like sandbags. The next day, the 243rd Reserve Infantry Regiment leads the final surge, which takes the German second defensive line, but leaves de Castelnau’s army finally bled to a halt. When the German commander is captured, he is sure that he has been defeated by elite troops. 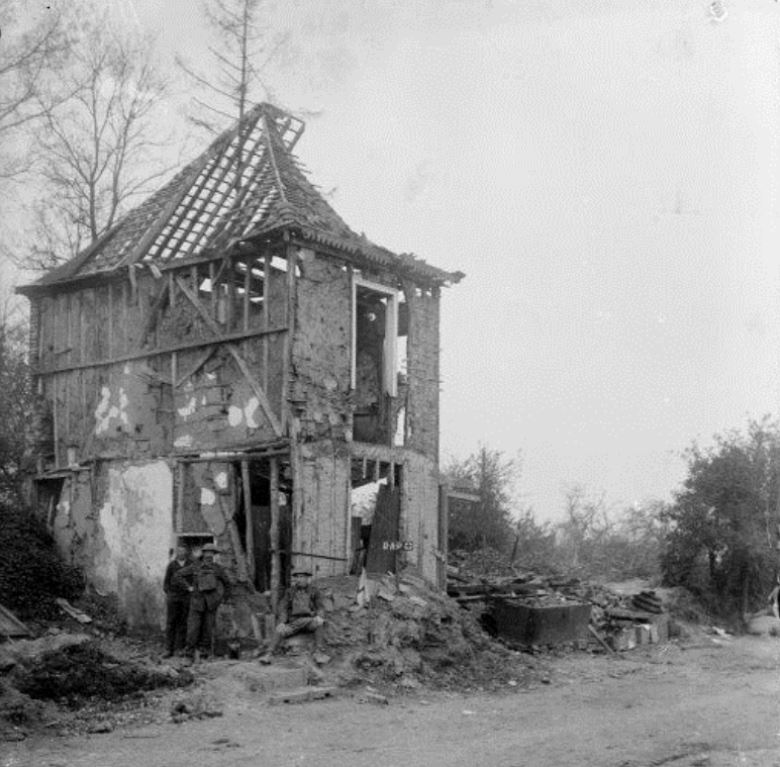 Dated 1916, a house in Hébuterne devastated by the fighting. Via the National Library of New Zealand

And yet this battle is merely a diversionary attack from France’s main effort against the German salient at Souchez, where the defenses are even more elaborate. Known as the Second Battle of Artois, the offensive campaign is consuming two French lives for every German, an unsustainable ratio of attrition, and it is failing at Joffre’s strategic objective of drawing German strength from the Eastern Front. A German shift in mass has already transpired, and his Russian ally is currently in a state of disordered collapse in Galicia. While the British Empire is assuming responsibility for a greater section of the Western Front all the time, Sir John French is unwilling to consider using them in any offensive until strategic reserves of ammunition can be stockpiled.

Joffre and de Castelnau also lack sufficient heavy guns. Their army’s prewar faith in maneuver and offensive ‘spirit’ (élan) favored light field guns over the kind of heavy tubes and shells needed to destroy fieldworks, and shortages continue despite the nation’s best efforts to ramp up production. Frenchmen killed in the battle begun today whilst trying to assault intact German defenses are a sign that the allies have still not committed themselves to coordinating solutions to their mutual material shortages, much less their political differences. 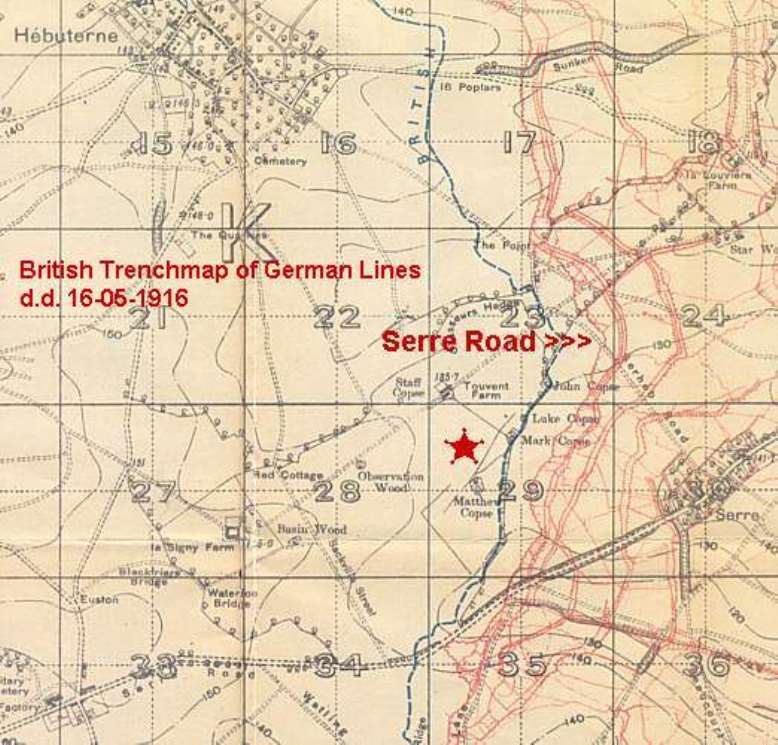 A map of the sector where today’s battle took place. The red star marks the objective at Heidenkopf. Via Pierre’s Western Front