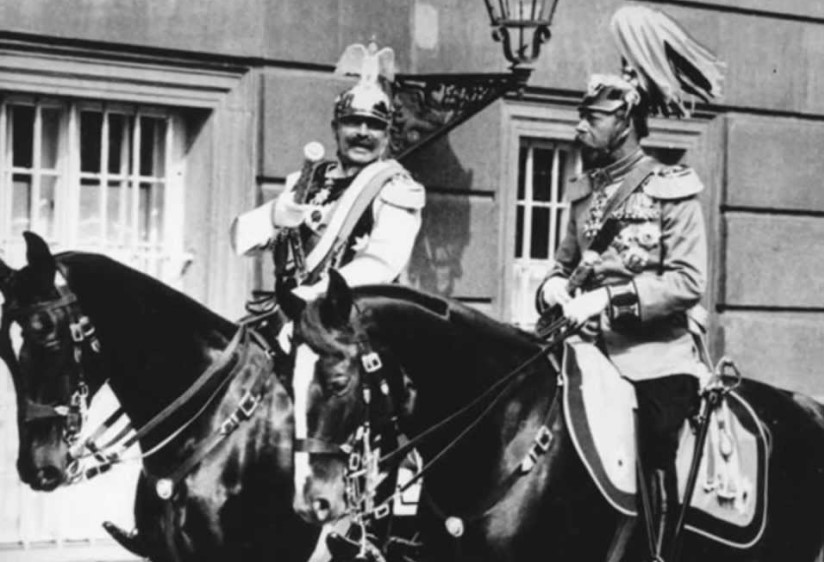 Founded in the 14th Century to support Edward III’s claim to France, and dedicated to England’s patron saint, the Most Noble Order of the Garter is one of the most cherished aristocratic institutions in the world and by far the oldest, most prestigious order of chivalry in Great Britain. New entrants are always named on April 23rd, St. George’s Day, with membership restricted to the King, the Prince of Wales, and twenty four ‘companions’ selected by the king with the advice of his government.

Since 1813, the order has included ‘Stranger Knights and Ladies’ — foreign monarchs England wants to draw into closer embrace. These have included Russian Tsars, an Ottoman sultan, a Persian Shah, the Emperor of Japan, and the sitting monarchs of Germany and Austria, both of which have now been at war with Britain for ten months. In the latest example of anti-German feelings created by the conflict, today King George V strikes eight names of enemy princes and monarchs from the ‘Garter Roll,’ including his cousin Wilhelm II of Germany and Franz Joseph of Austria, ordering their ceremonial banners and arms removed from St. George’s Chapel at Windsor Castle.

Before the fighting started, familial relationships among the great European houses were seen as a kind of glue that helped to hold together the fragile peace of a continent. But now the Great War is sundering those connections as wave after wave of nationalist feeling grips the country, compelling George V to disown his links to Germany. Whereas the aristocracy was a vital part of the complex world in which the Great War began, the conflict is steadily destroying that old society along with its system of values. While Europe still has nobles and England still has a peerage, their modern roles in government and society are greatly reduced, and have never recovered from this moment in time.

It is impossible to divorce today’s episode from its context in recent events. A German torpedo sank the Lusitania just six days ago, sparking widespread anti-German riots in major cities. And issued just yesterday, the Report of the Committee on Alleged German Outrages repeats every available tale of atrocity, both real and imagined, committed in the occupation of Belgium. Nor does today’s move bring an end to the controversy over German names and titles among the English nobility, for there are years of war yet to fight.

In 1917, James Bryce, the Report‘s author, will be appointed by the Prime Minister to study the matter; his efforts will result in the Titles Deprivation Act of 1917, which strips three German princelings of their British peerages. At George’s request, Prince Louis Alexander of Battenberg, a British naval officer, German prince, and former First Sea Lord who was forced from his office by a campaign of anti-German agitation when the war began, will give up his title to the Grand Duchy of Hesse and recast himself as Mountbatten, Lord Milford Haven. George’s relatives in the Teck, Schleswig-Holstein, and Gleichen families will all change their names. George himself will stop being a scion of House Saxe-Coburg-Gotha, instead adopting the family name ‘Windsor’ by which the British royal family is still known today. 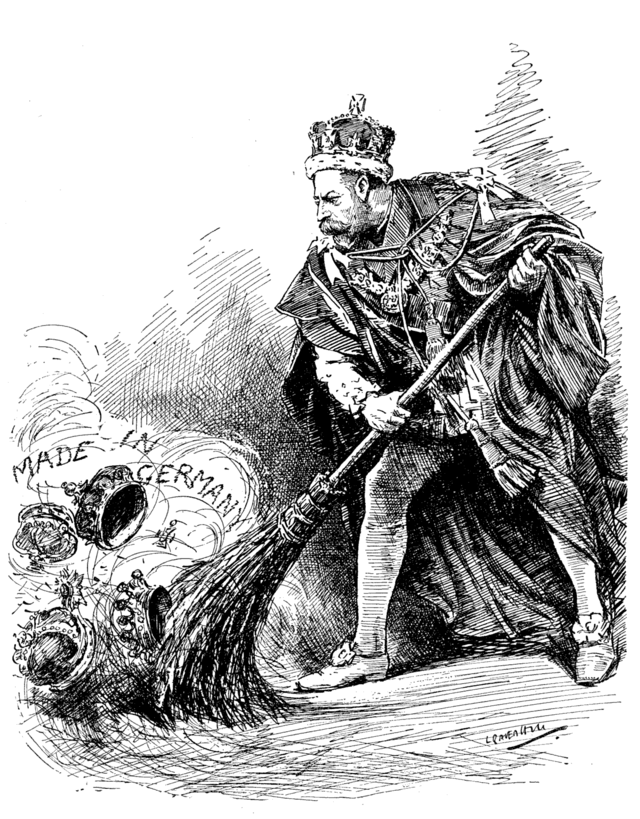 Of course, none of this occurs without prompting. For months now, the Daily Mail and John Bull have campaigned against the continued inclusion of Wilhelm and Joseph on the Garter Roll. Leopold Maxse, the editor of the National Review, is a leading conservative figure whipping up anti-German sentiment with malicious intent. Since August, Maxse’s publication has been the biggest purveyor of anti-Semitic conspiracy theories in the nation.

Some of us are of the opinion that it would be scarcely worth while to knock out the modern Attila and his Huns — to reduce the German Empire to more reasonable proportions — if we are to leave the British Empire at the mercy of the German Jew. […] Never again can we allow ourselves to be hocussed and bossed by German Jews or crypto Jews.

Joining the short-lived National Party in 1917 because he deems the Tories too friendly with Liberal Prime Minister Lloyd George, Maxse calls for the ‘eradication of German influence’ from the country, denounces the postwar peace for failing to destroy Germany, and opposes the League of Nations with bitter calumnies against Woodrow Wilson. As the Old World dissolves in fire and blood, the sometimes-surprising roots of our violent, hate-filled 20th Century can been seen emerging from the wreckage.