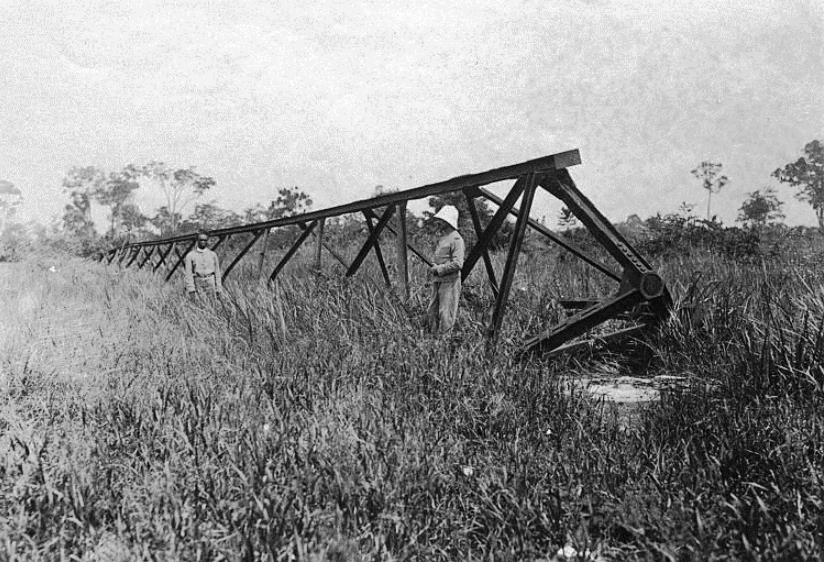 When French and British troops entered the coastal city of Douala last September, they found the wireless station already demolished (see above). In one fell swoop, the German defenders of Kamerun were cut off from the outside world, unable to resupply or rearm themselves while the allies invaded the colony from eight directions. But Kamerun is huge — larger even than the entire Western Front — while the forces here are very small in comparison. This is one reason why the conquest of Kamerun is taking time. 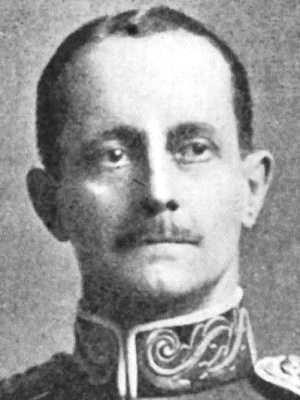 A Canadian by birth, Gen. Dobell has already served in Sudan, South Africa, and India

Today, French African soldiers occupy Eséka, a crossroads town on the central railway lying just north of a bend in the Nyong River, fifty miles west of the German bastion at Yaounde, on the line of a geographic transition between between coastal plains and rugged hills. The terrain is making movement even more difficult, further slowing down their advance. Led by Colonel Mayer, the column is the southern companion to a British one commanded by Lieutenant Colonel A.H.W. Haywood that has occupied the town of Wum Biagas, located just a few miles to the north, for eight days.

Advancing in parallel, both columns have met strong resistance. There was an especially tough fight on the Mbili River west of Wum Biagas, where Major Haedicke had destroyed the bridge, built sharp-pointed obstacles all along the bank, and dug a 1,600-foot entrenchment flanked by a steep, wooded ridge and the deep Kele River.

During an eighteen-hour battle, Haywood attempted to send two Nigerian companies on a flanking movement while his 2.95-inch mountain guns supported a frontal assault, but the terrain proved too difficult. The next day, his scouts found Haedicke’s men withdrawn to yet another defensive line, ready to fight another delaying action. It is a preview of things to come in this theater of war, where no army can penetrate the country without clearing a path through the bush first. 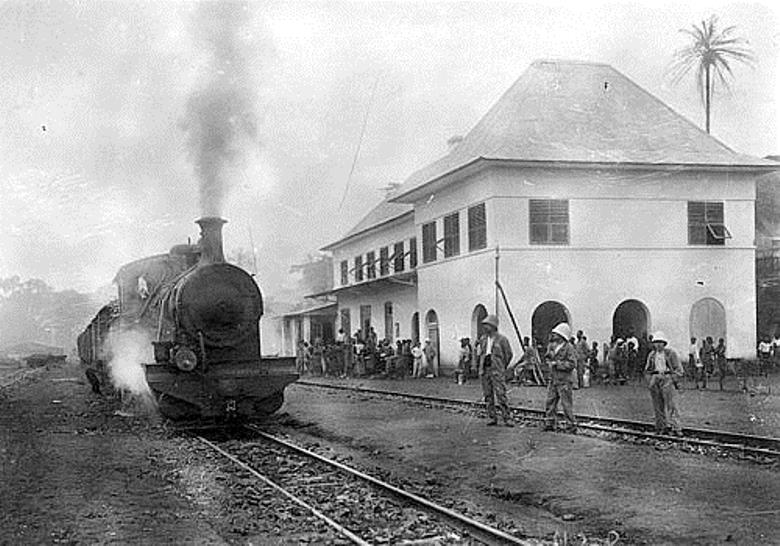 French soldiers watch an idling train engine at the Eséka railroad station in 1917. If anything, modern infrastructure — roads, rails, bridges — was even more essential to military progress in the Kamerun campaign than better-known theaters of war

With the two columns consolidated under Mayer, the combined force leaves Wum Biagas again on May 25th, meeting strong opposition just two miles out. Using the dense, hilly forest to turn every bend in the road into a strong point for ambush with machine guns, the German defenders limit the advance to just a mile a day, harassing the allied line of communications with elephant riders and small raiding forces. As Mayer’s telegraph line gets longer, so does his logistical vulnerability. Taking advantage of terrain which makes off-road movement and flanking maneuvers extremely difficult, the German force manages to delay the offensive just long enough for a change in the weather.

With Yaunde still forty miles away, dysentery breaking out in his ranks, and the tropical rainy season blasting down in torrents, on June 7th Mayer informs theater commander Lieutenant General Charles Macpherson Dobell by wire that he cannot continue, and is ordered to withdraw. He will need the support of new companies marching hard on flooded roads to extricate his force from the enemy, who refuses to simply let him retreat back to his starting line; harassed all the way back to Eséka, one in four of his men will be a casualty to the enemy — and disease takes an even bigger toll.

This last offensive of the equatorial season was supposed to coincide with a push from the south by troops from French Equatorial Africa under General Joseph Aymerich, but that offensive is also slowed by terrain and creative resistance. Despite being surrounded by enemies with columns invading from all points of the compass, Colonel Carl Zimmerman’s deceptively simple plan to outlast the allies has worked…so far. He would surely be better off with more guns and ammunition. His force is especially short on field artillery. 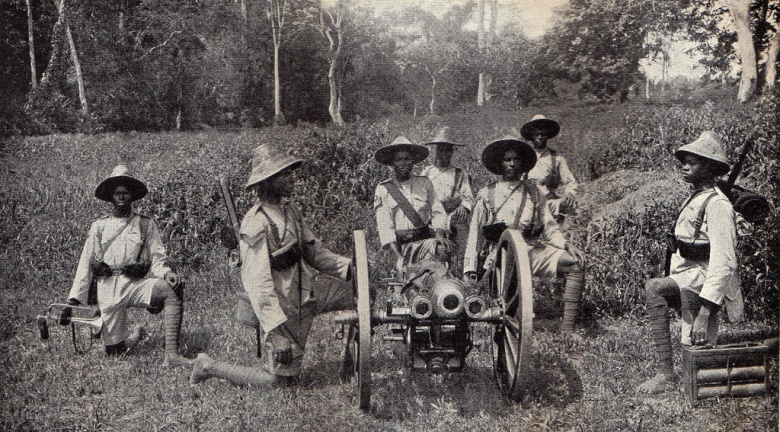 But the failed offensive does have an effect on the native peoples of Kamerun. Whereas the Germans have already managed to make enemies of some tribes through prewar oppression and their scorched-Earth strategy of guerrilla warfare, the half-million Beti people living in the rain forest around Yaounde have invested heavily in the German administration of their land, and are some of its proudest and most accomplished collaborators. Zimmerman has more volunteers to fight than he has rifles to equip them, but the Beti people as a whole are shocked by the length and destructiveness of the white man’s conflict.

Fundamentally, a modern way of war is colliding with the world’s oldest way of war. For example, although discipline and morale are excellent, German officers find that their African troops are prone to kill captives according to an accepted African value-system which emphasizes finishing the enemy off quickly. Teaching them to march, dig, shoot, fight, and kill is easy; holding them back from fleeing civilian porters is another matter.

As if to answer the horrifying magic of Europeans with their own native sorcery, during the rainy season of 1915 the ‘jungle newswire’ begins to whisper of dark things rising in the gloom. These rumors may be echoes of the hatchet wounds inflicted on some bearers and cooks who survive the most harrowing moments of the Wum Biagas offensive and the retreat to Eséka. The longer the conflict rages, the more traditional authority crumbles and criminality takes its place. It is the sad song of Africa’s 20th Century: those are high explosives you hear, not jungle drums. 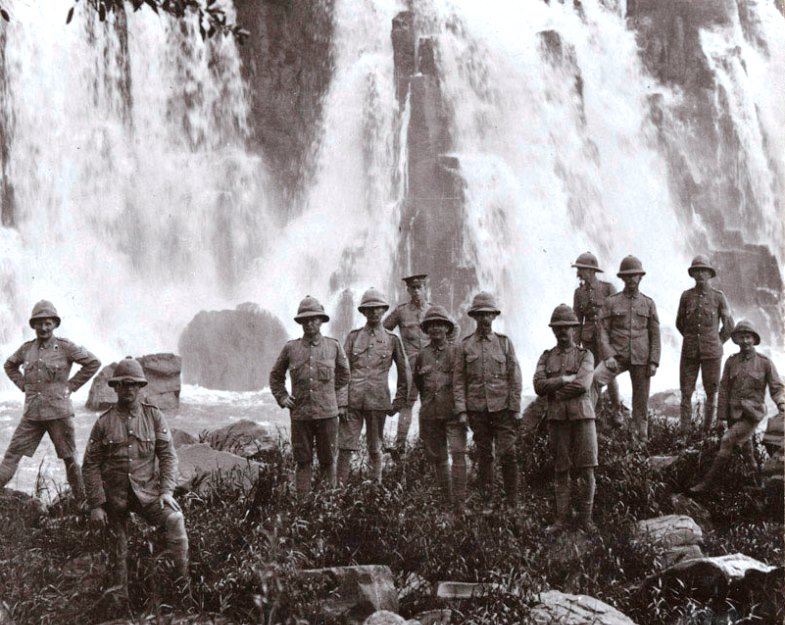