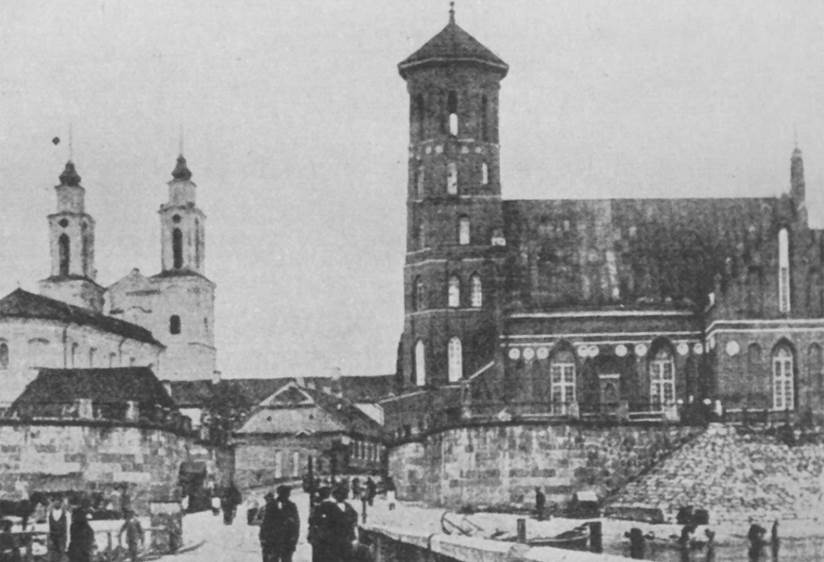 An unsettled feeling has gripped the Russian Army for weeks. As the Grand Duke Nikolay Nikolayevich Romanov presses his offensive on the Carpathians, setbacks at the extreme southern end of the Eastern Front — Russia’s left flank — have resulted in the recapture of most of Bukovina. In his diary of the Great War, today French ambassador to Russia Maurice Paléologue records that a powerful new German offensive is expected north of the Carpathian Mountains, in the strategic center, with another German offensive already underway against Russia’s extreme right flank in modern-day Lithuania.

The information coming in from every quarter about the concentration of Austro-German troops in Galicia is becoming alarming. The enemy is certainly preparing a sledgehammer blow in that region.

By way of diversion the Germans are boldly thrusting into Courland, in the direction of Mitau and Libau.

The port of Libau has suffered naval bombardment for weeks already, while German aircraft seem to rule the sky, underlining the urgency of the new German offensive. The enormous Russian Army is somehow outnumbered better than four to one in its own Baltic territory, and to make matters worse, Russian procurement problems continue. There are severe shortages of artillery tubes, particularly heavy guns, and shells to fire from them. Artillery crews at the front are sometimes limited to two shells a day; there are shortages of rifles and grenades and shovels and barbed wire. Human wave attacks have been necessary to dislodge German armies from Russian territory.

But this is not what has everyone talking in Petrograd. Paléologue, who has passed his material concerns about the Russian Army to Paris more than once, wrote three days ago of the Army’s revulsion to Rasputin, who recently made an embarrassing public spectacle of himself in a restaurant. Seen drunk and handsy at a time when most Russian soldiers and workers are denied vodka to ‘increase their energy,’ the incident has deepened rampant disillusionment and distrust. The Tsar’s familial German ties are now a joke:

The Grand Duke Nicholas and his staff accompanied the Emperor during his recent visit to the Galician front.

Everyone has been struck by the indifference, or rather coldness, with which the Emperor was received by his army. The legend which has grown up around the Empress and Rasputin has been a serious blow to the prestige of the Emperor both with the men and their officers. No one doubts that treachery has its lair in Tsarskoïe-Selo palace and the Miassoyedov affair provides an argument for all suspicion.

Near Lvov one of my officers overheard the following conversation between two lieutenants:

“Which Nicholas are you talking about?”

“The Grand Duke, of course! The other one’s nothing but a German! “

Conspiracy theories are rampant in Russia; so is disinformation. Echoing the Dreyfus Affair in France less than a decade ago, Colonel Myasoyedov was recently hanged on trumped-up charges of espionage after a secret trial marked by anti-Semitic overtones. The charges emerged from bigoted commanders in charge of the defense of northern Poland, which has been the epicenter of a new wave of forced dislocations of Jews — catastrophes that have been underway ever since the Eastern Front began, but which now increase in frequency and deliberate awfulness as Russia’s Winter strategy carries over into Spring, seemingly by sheer inertia.

The city of Kovno, seen above ca. 1915, lies directly in the path of Army Group Lauenstein, a scratch force from the German Tenth Army that has been pressing hard for weeks. Seizing two key railroad stations today along the line leading directly towards the town, it is merely a diversionary offensive to what is coming in the center, but this will not become clear for days yet. In the meantime, desperate for another scapegoat to explain Russian failures, the Grand Duke is about to make the Jews of Kovno into the latest victims of national wartime hysteria. 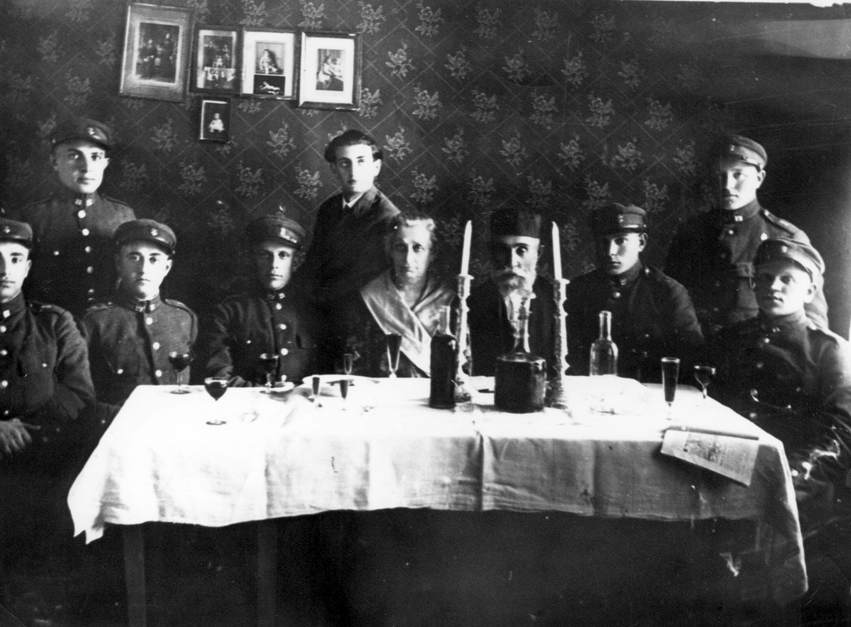 Lithuanian Jewish soldiers celebrate Passover during World War I. Despite volunteering in their hundreds of thousands, Russian Jews meet with increasingly strident anti-antisemitism as the war turned against their side in 1915

As victims of every regime change in the Lithuania for many centuries, it has taken Jews a long time to achieve a stable acceptance in Lithuania. When the war began, Lithuanian Jews flocked to the colors just like Jews all over Russia, temporarily silencing the anti-Semite faction. But as the Novyi Voshkod quotes the Litovskaia Rus reporting in January, tensions have already begun to tear at the social fabric of the city.

Among the inhabitants of Konstantinovskaia volost, which has not suffered losses from the enemy advance, there is a feeling of strained relations with the Jews of the place, whom Christians accuse of German sympathies and suspect of espionage, which has led to a boycott of the Jews. The Governor of Kovno, in his tour of the gubernia, gave corresponding instructions to each part of the populace.

Between the 3rd and 5th of May, an enormous secret operation will be carried out on the orders of Grand Duke Nikolayevich. Russian Army units will systematically force the Jews of Kovno, Courland, and Zeimelis to abandon homes and property to be relocated further east. Most receive only a few hours to a day’s warning; for every story of compassion and care by their fellow Lithuanians, there is another tale of woe as Russian soldiers enforce a cruel separation between the deportees and their gentile neighbors, and local gentiles seize everything left behind. Many old and young Jews are forced to walk long distances.

As elaborated by the General Staff of the North-West Front in an announcement on the third day of the pogrom, the justification for expelling all these Jews as “spies” is a fairy tale explanation for the Russian Army’s recent defeat at Kuzhi.

Before the arrival of our units, Jews hid Germans in many basements in the village, and upon the signal of a gunshot, burned Kužiai. The Germans, leaping out of basements, rushed to the house of the commandant of our infantry division, and at the same time, two of their battalions supported by cavalry brought fire upon our sentry locations located outside the village, and dug themselves in. The house in which the division commander was living soon became enveloped in flame, and Colonel Vavilov, ordering the divisional banner to be burned, did not wish to surrender to the Germans and be killed. Our approaching reinforcements drove the Germans out of Kužiai with bayonets and saved the remains of the burned banner.

In fact, none of the forty houses in Kužiai has a basement large enough to hide a German squad, making the tale as dubious as contemporary rumors of Jews using windmills to communicate with the Central Powers, or airlifting the German armies eggs and poultry in Zeppelins. Nevertheless, as ‘news’ of the treachery is repeated in every Russian city, trains pass through Vilnius carrying the Jews of Kovno away to internal exile. Vilnius Jews are also threatened with the same fate; many will not survive the war, victims of hunger and economic marginalization. They are the victims of a regime that is as fragile as it is absolute. 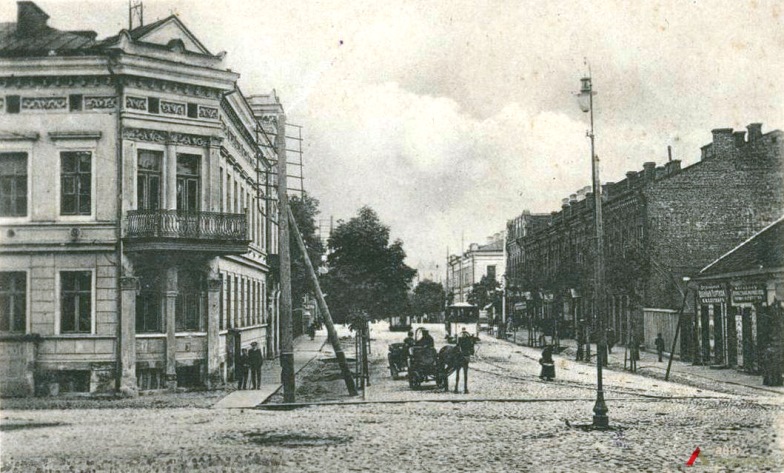 The Kovno ghetto ca. 1900. Note the streetcar, streetlight, and other signs of modernity rather than hidebound tradition