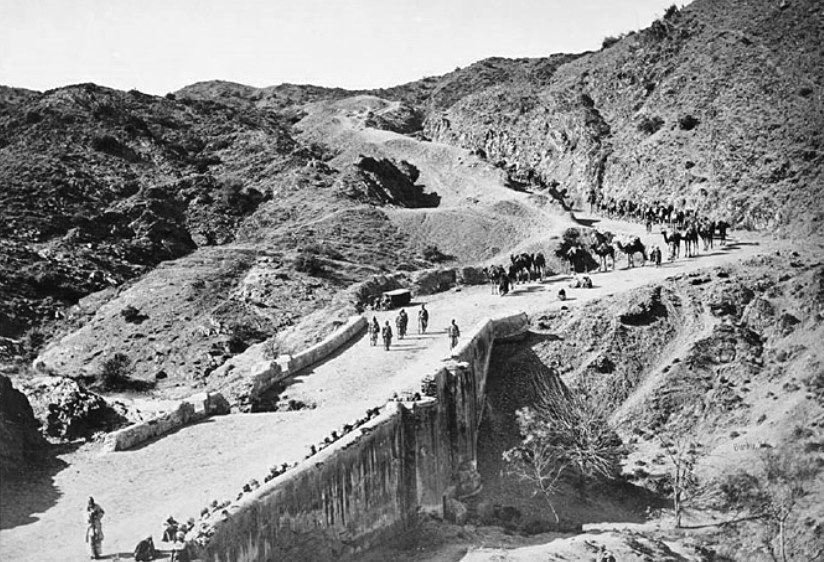 Seen above showing its age during the Second Anglo-Afghan War in 1878, Khyber Pass resonates with a millennial history of imperial adventures and misadventures in Central Asia. Located on the northwest frontier of British India in 1915, it is the gateway to neutral Afghanistan. In modern terms a buffer state created by the British Empire’s grand compromise with the Russian Empire, Afghanistan has been forged along physical, rather than human, geographic lines. Loyalties can be fluid here, particularly in Mohmand country, whose people overlook the ancient crossroads where Alexander the Great once passed.

A diversity of languages and religions makes the restive Kabul River Valley region tricky for an outsider, but British agents have become very good at forecasting trouble. They know Islamic preachers spread the Caliphate’s jihad and call the faithful to make war on Britain and France; they have heard about Turkish and German agents in the hills, passing out rifles. Today, a group of Afghan Mohmands moves into modern-day Pakistan looking to make trouble. But they are about to get some, for the Khyber Movable Column has marched out to meet them.

The contact battle is big, but brief, for the brigade-size task force’s automatic fire is superior, and the militants are unprepared to dig in or endure an extended fight. The Column’s field guns are effective where the insurgents lack such power and caliber. At the end of the day, an exhausted brigade of British and Indian soldiers holds a grim and dirty watch over the pass at Jamrud while the Mohmands return to their own side of the border. Heat casualties outnumber gunshot wounds; beginning tomorrow, the imperial troops withdraw to their base at Peshawar.

Their long watch on the frontier has only begun. 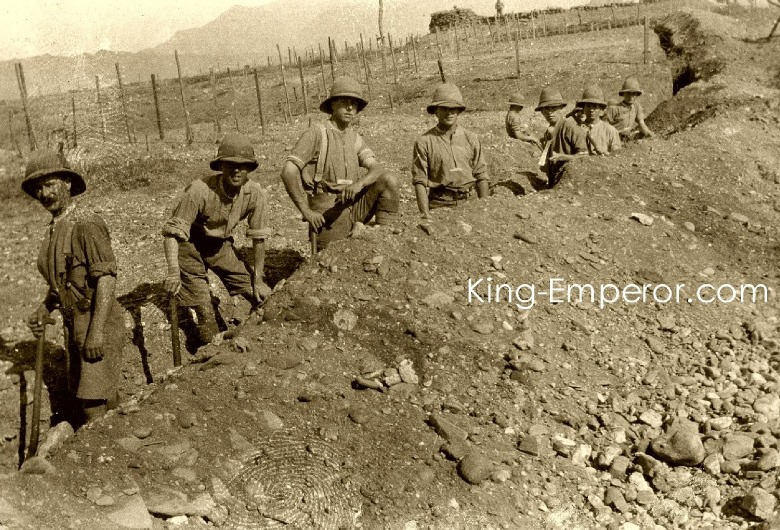 Men of the 2/4th King’s Regiment (Liverpool) in the Army of India digging trenches during the Mohmand Blockade in 1917. Note the use of barbed wire fencing in these prepared defenses, just like the Western Front

The new crisis is another proxy war sponsored by the Central Powers. Kaiser Wilhelm made the Caliphate’s declaration of jihad a priority in his alliance negotiations with the Sublime Porte with an eye to stirring up exactly this sort of trouble, and agents of the Central Powers are sowing disorder wherever they can. German rifles, Turkish organization, and Austrian gold account for a wide variety of tribal uprisings taking place this year; from the oil-fields of Mesopotamia and Iran to the Balkans, at the mouth of the Persian Gulf, in the hills of Morocco, and on the desert of eastern Libya, a campaign of incitement and provision has yielded the fruit of insurrection.

Among the agitators within Afghanistan are the Ghadarites, Indian nationalists of Hindu, Sikh, and Muslim sects. Already becoming a problem in the United States, and partly responsible for a mutiny at Singapore, the Ghadar Party’s intended uprising in Gujarat has nonetheless fizzled into an insurgency in exile at Kabul. That failure is largely due to British intelligence, which has carefully monitored the Ghadarites’ movements. As the storm gathers, the men of the King’s Regiment train hard, inuring themselves to the challenges of terrain and tactics.

They will also be burning the villages and crops that support insurgency. The official unit history is rather short and specific on this score, and it helps to explain why the resentment within Afghanistan will only increase during the Great War. 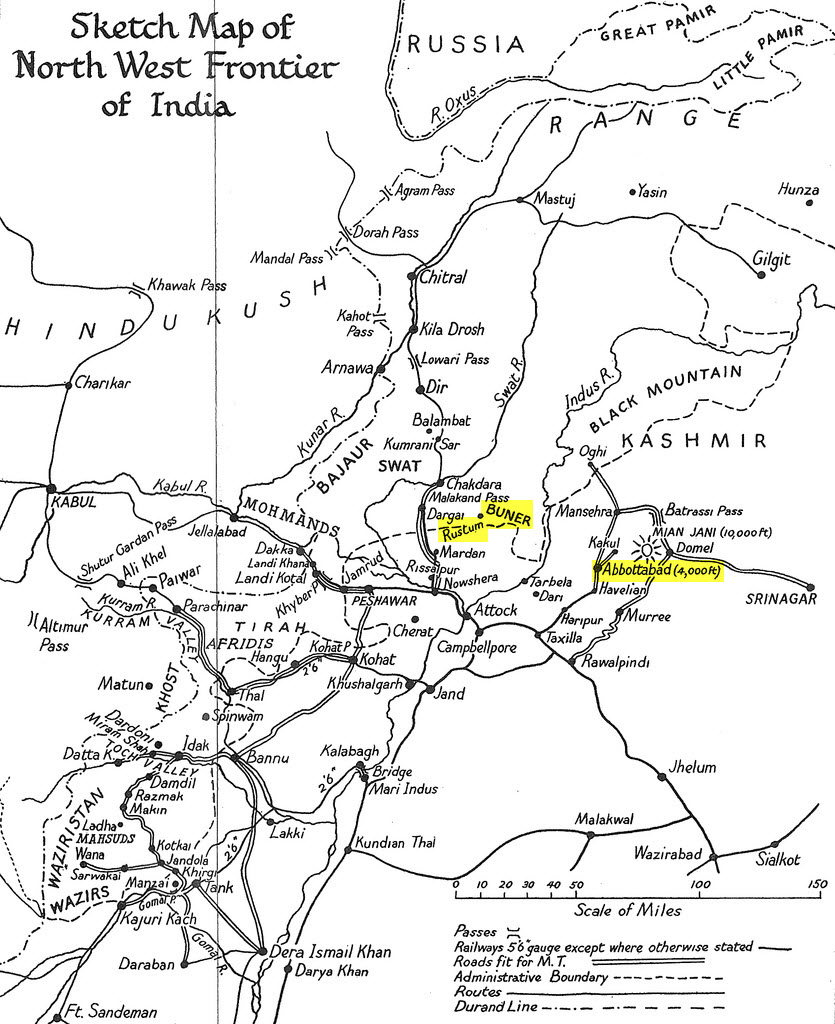 A contemporary infrastructure map of the contested region, one of the ancient world’s most active trade routes

In September, the 2nd Battalion of the King’s Rifles will stand at the hottest point of the biggest fight on India’s northwest frontier since 1878. After a daring move across the border hidden in covered lorries, they fight another day-long, thirsty engagement under a burning sun. This fight involves the entire Peshawar Division and as many as 18,000 tribal insurgents; by the end of the year, the campaign here will consist of sniping, night attacks, and harassing fire. In response, the Army of India destroys farms and fields that support the uprising, carves trenches into the arid soil, and builds an amazing amount of barbed wire fencing.

If it seems odd that a small-scale imitation of the Western Front should break out in the hills and valleys of Central Asia a century ago, consider two other recent gun battles. On the first day of the new year, two Afghan men, Badsha Mohammed Gool and Mullah Abdullah, attacked a train packed with picnickers in Australia. Inspired in part by the Caliphate’s call to jihad, during the ensuing 90-minute standoff with police and soldiers the two men sought cover behind a rocky outcropping, succumbing only when outflanked and outfired. Rate of fire also figures prominently in a recent desert siege near Jeddah, Saudi Arabia, when a German shore party used its machine guns to hold off a far superior number of Arab tribesmen.

Quite simply, gunfire has its own rules, and they do not admit any sectarian advantages. The Army of India can resupply men in the field with food, water, and ammunition; the vast majority of its Muslim troops fight well and loyally. No tribal army can sustain itself in the field for extended operations. If there is anything unusual about the Peshawar front, it is that the Army of India conducts a strategic defensive here instead of attacking. 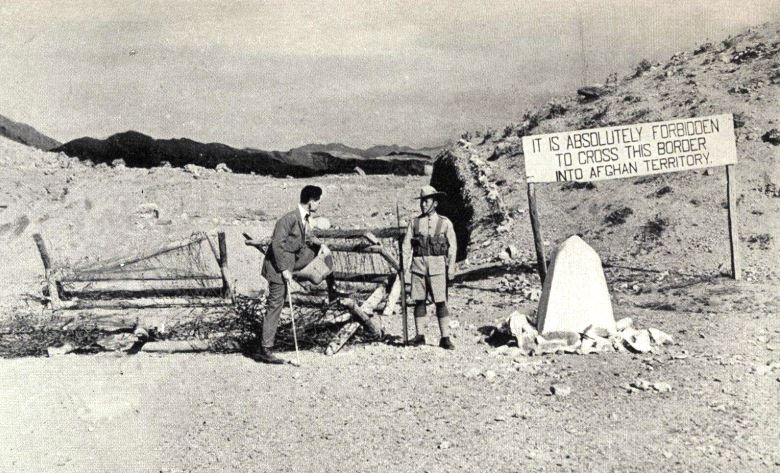