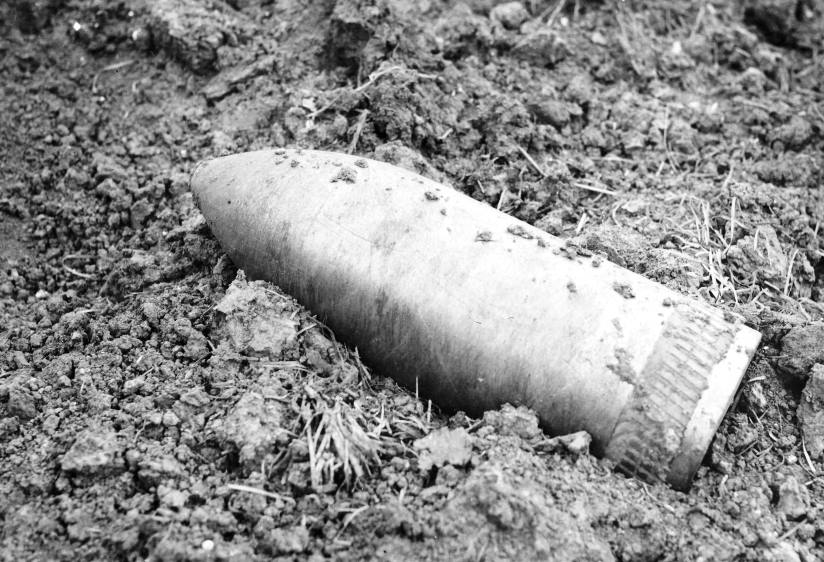 The Times creates an uproar today when Charles William Harmsworth, later Alfred Lord Northcliffe, publishes an article by Charles à Court Repington pinning the blame for continued shortfalls in munitions production on the War Office and Lord Kitchener. The burgeoning ‘shell crisis’ has existed since October, but only today does it finally break into the open and become a topic of public conversation — the ‘shell scandal.’

Repington’s article in the Times

“The want of an unlimited supply of high explosive shells was a fatal bar to our success,” Repington quotes Field Marshall Sir John French, the British Commander-in-Chief, in making the case that inadequate supplies of artillery ammunition, particularly high explosive shells, are directly responsible for the failed British offensive at Neuve Chapelle in March. In fact, the shortage has contributed to British defeats on both offense and defense during just the last week. Defying a simple fix, the problem isn’t just inadequate numbers, but poor quality control that produces countless duds like the one pictured above.

In blaming Kitchener for these issues, Harmsworth and Repington have knowingly attacked one of the most popular men in the country. Known as ‘Kitchener of Khartoum’ (or ‘K of K’ for short), his mustache has become a national icon by way of ubiquitous recruiting posters, daily press attention, and the cult of celebrity surrounding his long career. But within the Asquith government, disillusionment with Kitchener over his handling of munitions production challenges, especially his rejection of ‘big government‘ solutions for ‘free market’ failures, has become the majority view.

Through a slow, quiet, bureaucratic coup, Chancellor of the Exchequer David Lloyd George has already become the de facto head of a nascent Ministry of Munitions. Created to resolve those production bottlenecks which Kitchener refuses to even recognize, and implement solutions he has rejected out of conservative hubris, the MoM has met with fierce resistance from a powerful minority of the cabinet, aggravating Prime Minister Asquith’s usual habit of vacillation. As a result of the press scandal, Asquith will finally follow through and remove responsibility for munitions production from the War Minister’s portfolio.

Despite losing a million subscriptions in the wake of their report, Harmsworth and Repington never let up the pressure on Kitchener. In retaliation, Kitchener bars Repington from visiting the Western Front until his own death in 1916. Before the end of 1915, the scandal will topple the Asquith government, end the career of Sir John French, and become Lloyd George’s stepping-stone to the premiership — which makes sense, since he is the one who encouraged Repington and Harmsworth to cover the story in the first place. 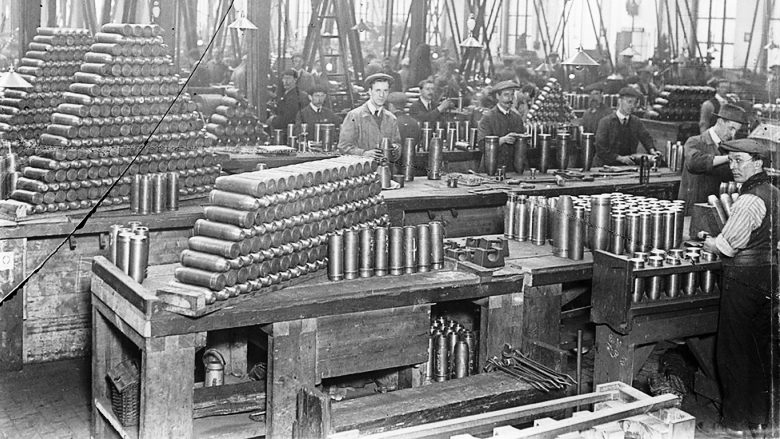 A shell assembly line in 1914. To produce more than 180 million rounds, Lloyd George must radically reorganize British industry by introducing women into the workforce, finding reliable contractors, and intervening in labor disputes

A notorious womanizer who lost his Army commission in 1902 by cuckolding a fellow officer’s wife, Repington is not afraid to make enemies, and already has a long list of them. Ever aggressive and argumentative, he will eventually have a knock-down, drag-out fight with The Times before leaving in January 1918 to write for The Morning Post. While his detractors never forgive him, Repington’s female conquests show remarkable loyalty, and his wife stands by him despite his numerous affairs. 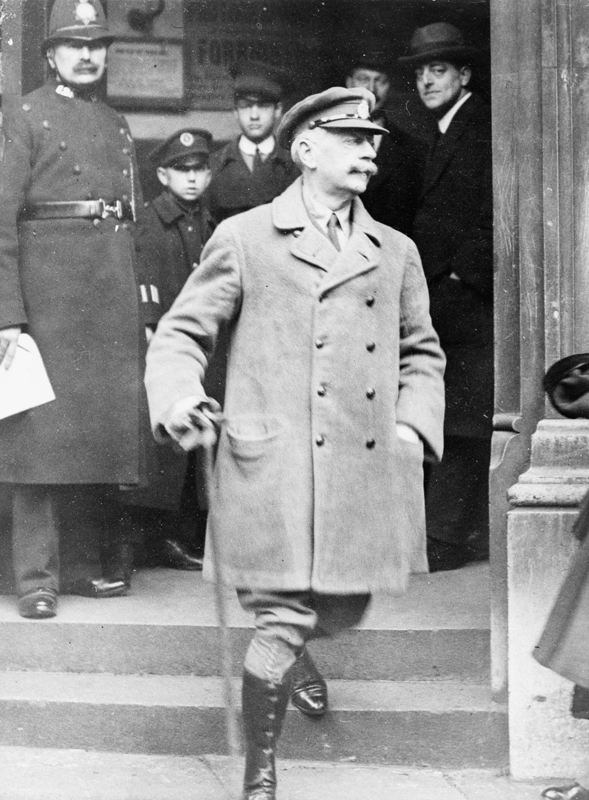 Repington walks out of court after being fined for violating DORA. Via the Imperial War Museum

But a few months after leaving the Times, Repington falls afoul of the Defense of the Realm Act (DORA), the sweeping wartime law which has established a modern security state of mail, wire, and news censorship to go along with the blackouts, rationing, and the government’s new war on drugs and alcohol. Charged with disclosing secret information in one of his articles, Repington is found guilty and fined. Ten years after his death, Lloyd George will still accuse him of “treachery and treason.” Known for betraying confidences and other ethical violations, Repington remains a controversial figure even today.

Yet Repington’s most lasting legacy is a linguistic one. Acknowledging the growing fears of an inadeqeate peace, on September 10th, 1918, Repington records a conversation in his diary in which he has used the term “First World War” for a conflict that, until that moment, has universally been known as “The Great War.” He is the first person known to use the phrase, signalling the possibility of a second, even bloodier conflagration.

Harmsworth never stops attacking Kitchener. Upon his death in 1916, the news mogul even remarks that “the British Empire has just had the greatest stroke of luck in its history” — a caustic statement, to be sure, but also a mark of how effective his campaign has been. Untouchable in May of 1915, in the year to come Kitchener’s public aura will be quite diminished by revelations of his ineffective management and hidebound leadership, while The Times will have already recovered from its drop in circulation. 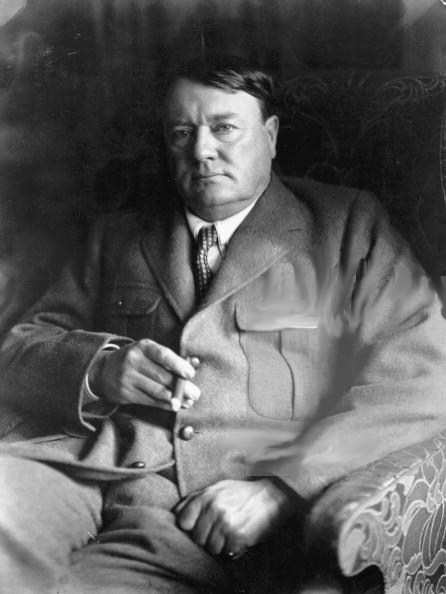 Harmsworth, later Lord Northcliffe, was one of the greatest newspapermen of the era

But the brouhaha touched off today by The Times still fails to impress the British public with the true depth of the crisis. For Britain is not the only power at war currently suffering from a shortage of munitions due to material issues. France and Russia both have their own problems, with some barriers proving insurmountable for the Russian War Ministry. The result is a cascade of failure which threatens to upend the allied war entirely. For as long as Russian gun crews are limited to a handful of shells per day, they cannot stop the onslaught of a powerful German-Austrian offensive, much less attack the Central Powers. Meanwhile, the British Empire has tens of thousands of soldiers invading the Gallipoli Peninsula in a failing bid to knock Turkey out of the war and link with Russia in a logistical embrace that might squeeze their enemies into submission. On paper, the plan seems solid enough: break through, send arms east, let Russian gold and grain move west through the Dardanelles Strait. In execution, however, ammunition shortages are already contributing to disastrous allied failures. Harmsworth and Repington have blown a whistle, but not loud or broadly enough.