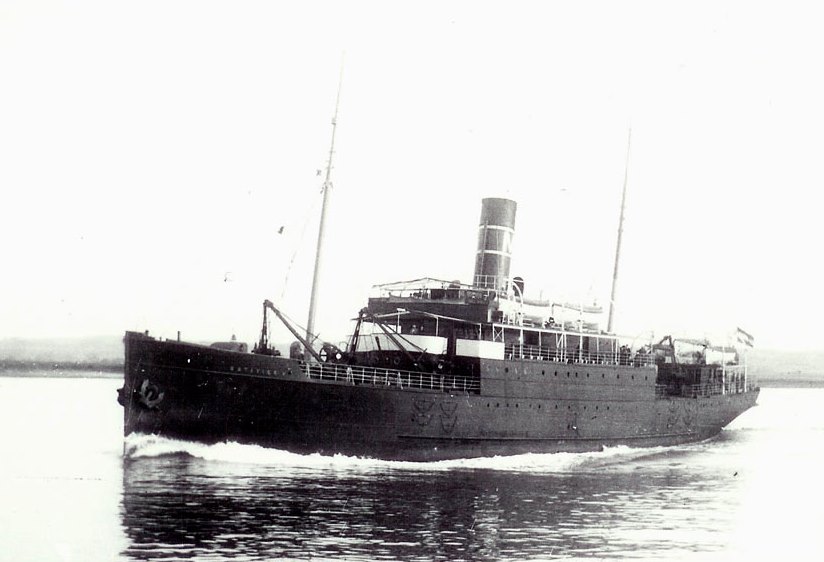 While returning home on its usual route between London and Rotterdam a week ago, the Dutch steam packet ship SS Batavier V (see above) was hailed just before dawn by U-28, a German submarine. Kapitänleutnant Georg-Günther von Forstner sent crewmen over to claim the neutral vessel as a prize of war, sparking an intense argument with the Batavier V‘s captain. The situation was still unresolved when another Dutch ship, the steamer SS Zaanstroom, hove into sight. Forstner seized this second boat as well, leading them both to the occupied Belgian port of Zeebrugge. There, the Dutch crew and passengers were sent on to the Netherlands for release, but fourteen Belgian men and two priests were arrested, and the ship’s cargo of eggs was seized for consumption by Germans.

As the British blockade of German commercial traffic has clamped shut in recent months, affecting even neutral vessels which might otherwise reach German ports, the corresponding German U-boat campaign against British shipping has escalated, too. To the dissatisfaction of neutral countries, both sides are now preying on their commerce. 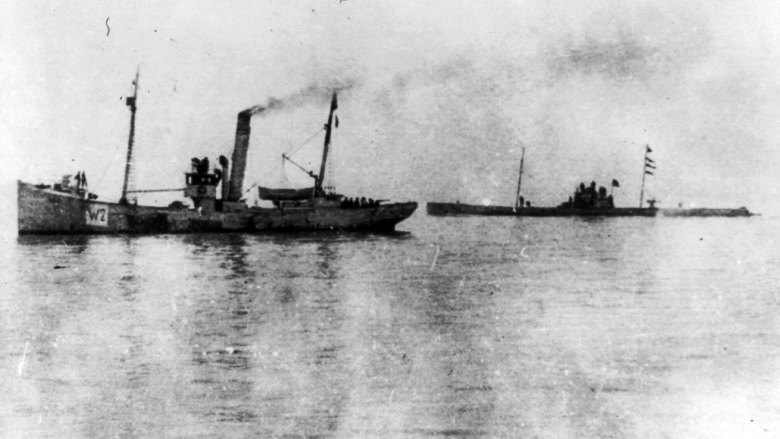 Photographed from the deck of the Batavier V, a pilot boat leads the U-28 and her prizes into occupied Zeebrugge

Today brings another dark chapter in the story of competing blockades with the first deliberate sinking of a neutral ship, again by the U-28. On its way from Valencia, Spain to London with a cargo of oranges, the 1,200-ton Dutch steamer SS Medea is stopped and searched in the English Channel off Beachy Head. Ordering the merchantman’s crew to abandon their ship, Forstner fires several rounds from his deck gun and sinks her. Tomorrow’s New York Times carries the following report from an Amsterdam correspondent:

Members of the Netherlands Government are refraining from any comment on the subject of interference with and destruction of Dutch shipping by German submarines, including the sinking of the Medea, beyond saying that requests for explanations have been sent to Germany with a view to an eventual protest after Berlin’s reply has been received.

The Ministry held an extraordinary council this afternoon, following conferences between the Foreign and Marine Ministers, and between the Naval Staff. The subjects under discussion were not made public.

The newspapers are taking a serious view of the situation, owing, as they put it, to the repeated “unpleasant incidents.” They refer to the present sea warfare as “competition in illegality.”

Another flurry of diplomatic correspondence fails to persuade Berlin or London to stop escalating their war on neutral commerce, but there is little that the Dutch government can do other than lodge a protest. Even when German officials cooperate, the dangers remain: in September, a German prize court returns the Batavier V to her rightful owners, but she hits a submarine-laid mine and sinks in May of 1916. 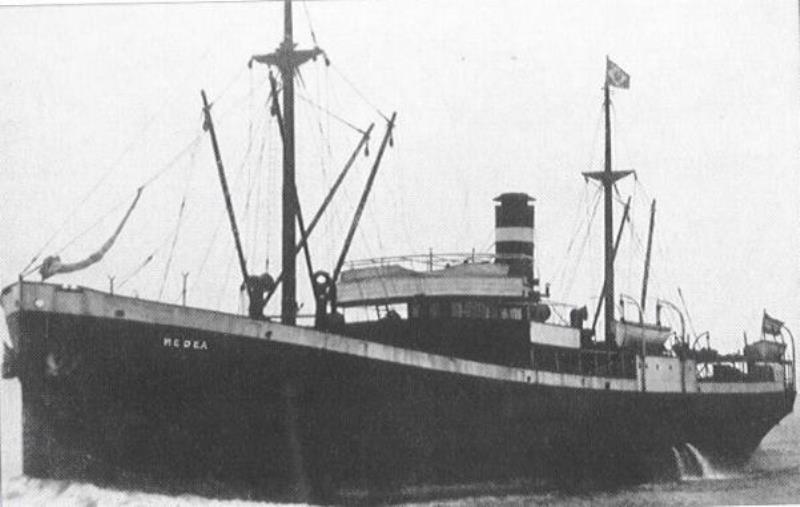 The SS Medea, sunk 100 years ago today, was the first neutral ship to be destroyed by either side

However, the war is also becoming more dangerous for submariners all the time. Today, the British Admiralty announces that on the same day that the Batavier V was seized, the HMS Dreadnought — which has lent its name to the entire class of battleships that take after her design — rammed the U-29 while she was firing torpedoes at the battleship HMS Neptune, cutting her in half and sending her entire crew to the bottom of Pentland Firth off northern Scotland.

Not only is the Dreadnought the original modern battleship, she is the only battleship known to have ever sunk a submarine. As naval warfare evolves rapidly during the Great War, a much smaller ship class emerges as the main antagonist to U-boats. Today, the crew of the Medea is rescued by the HMS Teviot, a destroyer that displaces a mere 600 tons compared to the Dreadnought‘s 20,000 tons. Originally designed for interdicting torpedo boats, destroyers are light, maneuverable, and run on fuel oil instead of coal, thus requiring very small crews to operate. 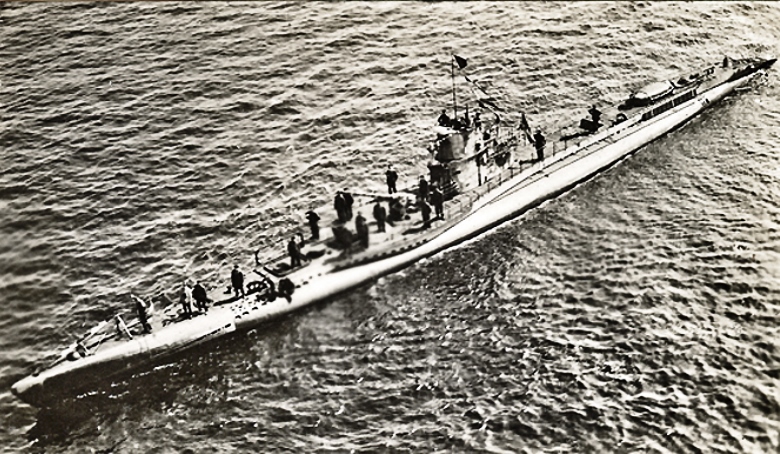 The U-29 at sea. Though German designs grew larger and more powerful, they remained slower and smaller than surface ships

Having fought no battles since 1830 while hosting international peace conferences in 1899 and 1907, the Netherlands were known for pacifistic idealism before the war. But we must not confuse Dutch neutrality in the Great War with pacifism, for it is a pragmatic policy. All Dutch army and reserve units been fully mobilized since July 31st, and will remain on alert against the possibility of invasion throughout the war. Minefields will guard the country’s coasts against landings. The country’s highest military commander, General Cornelius Snijders, prefers to join either side rather than endure the moral ambiguities and hazards of neutrality.

It’s not hard to see why. The sensation of being under siege is fueled by the German occupation authorities in neighboring Belgium, which has been invaded and occupied in spite of their neutrality. A million Belgian refugees have already crossed the border into Holland, spurring the Kaiser to start construction of a three-foot high, 125-mile long, 2,000-volt electrified barbed wire fence to seal the Dutch border. And just like the Belgians, the Dutch import most of their food supply, so the “competition in illegality” of the blockades and the excess population are already spiking prices. By 1917, the situation will lead to hunger — and later, riots.