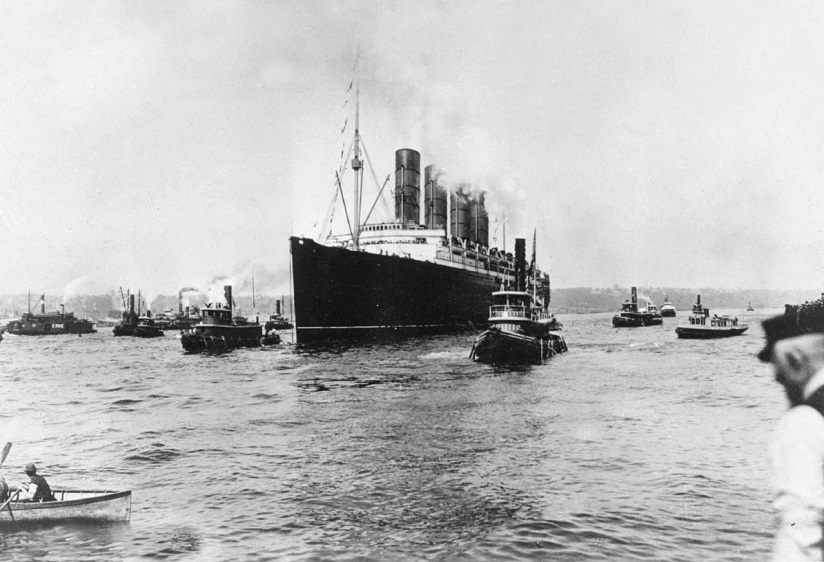 A little after 1 PM today off the southern coast of Ireland, crew members summon Kapitänleutnant Walther Schweiger to the conning tower of the U-20, which has been patrolling the world’s most highly-trafficked waters for days already and has used up all but three torpedoes. Just yesterday, they sank two 6,000-ton steamers, the Centurion and the Candidate, in the vicinity of the Coningbeg light ship (an anchored, floating lighthouse) due south of Killmore Quay. Knowing the area will surely be too hot to remain, Schweiger has brought his small ship more than a hundred miles west in hopes of using his remaining ammunition on unaware targets.

While he is not the most successful U-boat captain of the Great War, claiming only the sixth-highest total tonnage of all the Kaiser’s submarine commanders, Schweiger is undoubtedly the most consequential. His successes, especially the sinking of three large merchant ships in one day, are a primary justification for Winston Churchill’s policy of withholding ‘honorable treatment‘ from captured German submariners.

Heaving into sight now, the RMS Lusitania is a 31,550-ton luxury passenger ship of the Cunard Line carrying 1,959 passengers and crew on her return run from New York. She is so huge that at first, Schweiger believes he is seeing a cluster of smaller ships, so it takes him a moment to realize that she is indeed the world’s fastest ocean liner, and that she is not going as fast as she might. Immediately submerging and moving to intercept at top speed, Schweiger finishes his firing solution and fires exactly one torpedo which strikes the doomed ship just under the bridge. 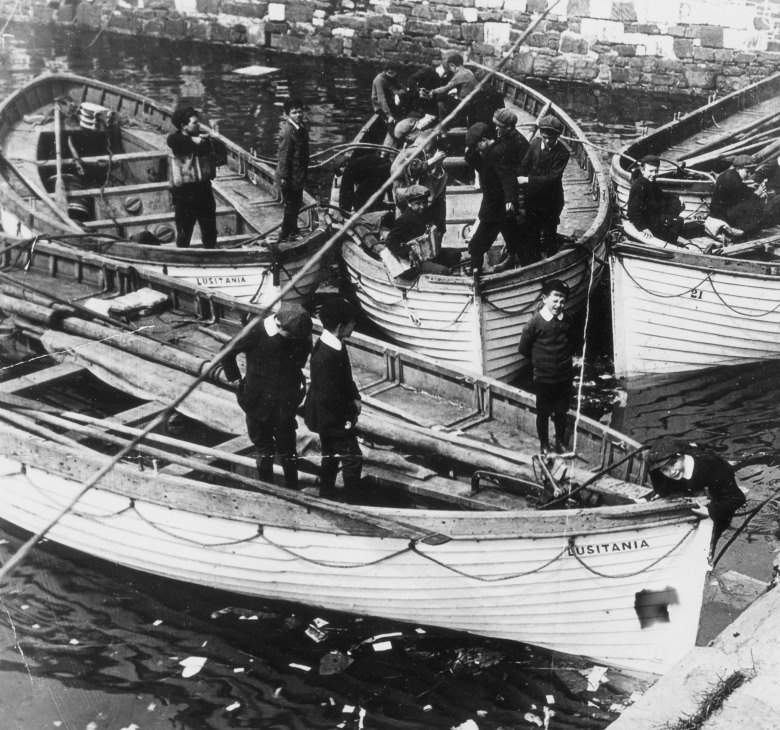 Some of the six lifeboats that made it to shore after the destruction of the Lusitania, which carried forty-eight of them

We now know that the ship steel of the era was more brittle than supposed at the time. As the forward boiler room floods from the gaping hole, there is a secondary explosion, most likely a pressurized steam pipe suffering catastrophic failure as the cold seawater pours over it. Just as soon as Captain William Thomas Turner has ordered a turn towards land — the standard maneuver for ships in distress — his boiler pressure drops precipitously, and the boat loses power. Dead in the water, she is sinking fast, her onboard elevators stuck shut between her nine decks and full of evacuating passengers, her watertight bulkheads buckling under strain.

Outside, terrified crew try to lower the boats from a slanting deck, fumbling with the ropes. Captain Turner has had the foresight to deploy them on their davits, and there are more than enough for everyone on board, but the ship is just sinking too fast. The funnels drop onto the deck, entombing passengers in coal dust. As panic sets in, people jump into the frigid Atlantic; rescue is hours away, so most of them will die. Altogether, 1,198 of those who left New York will not live to see Liverpool again. And because all but eleven of the 139 Americans on board are among that sad number, American opinions on the war will now coalesce against Germany. 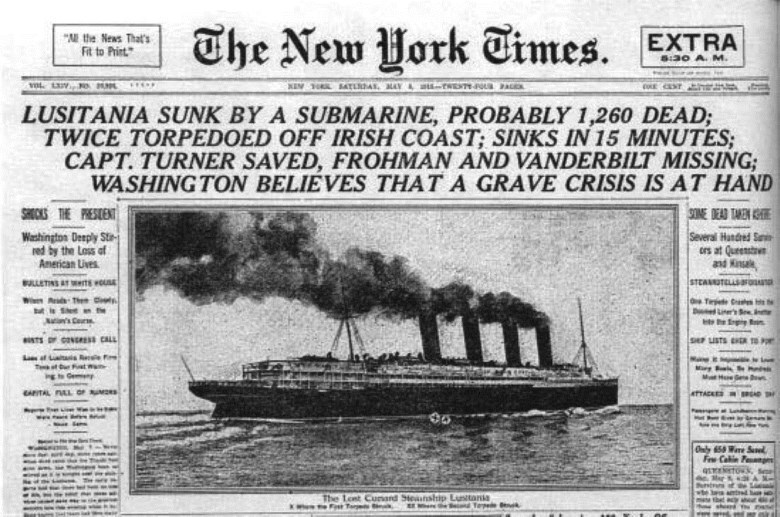 The sinking horrified a neutral United States, becoming known to most Americans within a day via wire services and newspapers

Tomorrow in Cleveland, Bernhard Dernburg, Germany’s de facto spokesman in the United States, will deliver a tone-deaf statement justifying the destruction of the Lusitania as part of Germany’s submarine blockade of the allies. Dernburg focuses on the cargo of rifle ammunition and empty artillery shells in her hold as well as her brief listing as an auxiliary cruiser at the beginning of the war.

Vessels of that kind can be seized and be destroyed under The Hague rules without any respect to a war zone. The Lusitania was a British auxiliary cruiser, a man-of-war. On the same day she sailed the Cameronia, another Cunarder, was commandeered in New York Harbor for military service.

The fact is that the Lusitania was a British war vessel under orders of the Admiralty to carry a cargo of contraband of war. The passengers had had full warning, first by the German note to England in February, second by advertisement.

Germany wants to do anything reasonable so as not to make the United States or its citizens suffer in any way. But she cannot do so unless Americans will take necessary precautions to protect themselves from dangers of which they are cognizant.

Schweiger’s torpedo has done enough already, but German reactions will only further polarize American politics. Another flurry of diplomatic notes follows the sinking, with President Woodrow Wilson taking personal charge of the correspondence; his pacifistic Secretary of State, William Jennings Bryan, will resign in dismay at the prospect of war. In a classic case of blowback, the Kaiser’s naval policy has set the American people on a new course that will eventually lead to the Western Front — and his abdication in defeat. 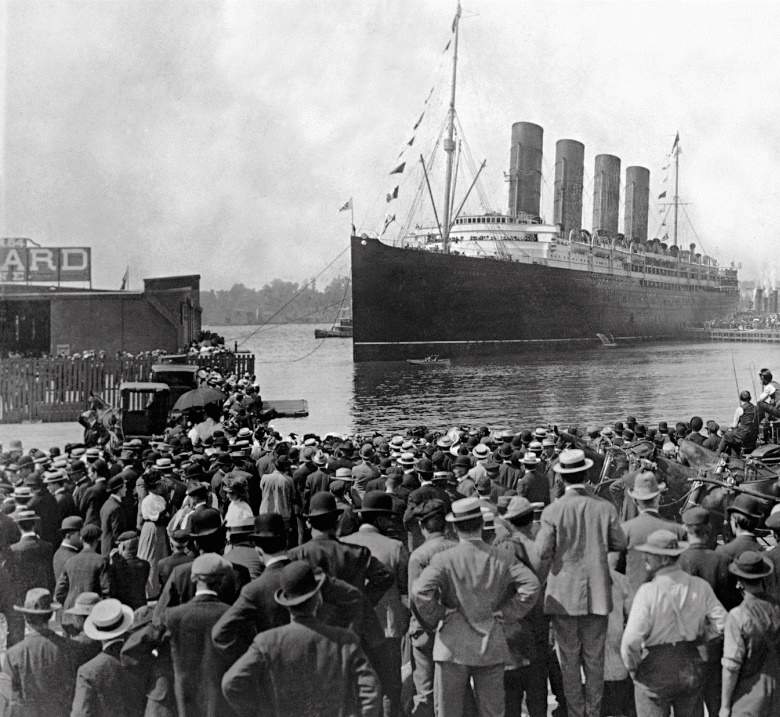 The Lusitania during her May 1 departure from New York City