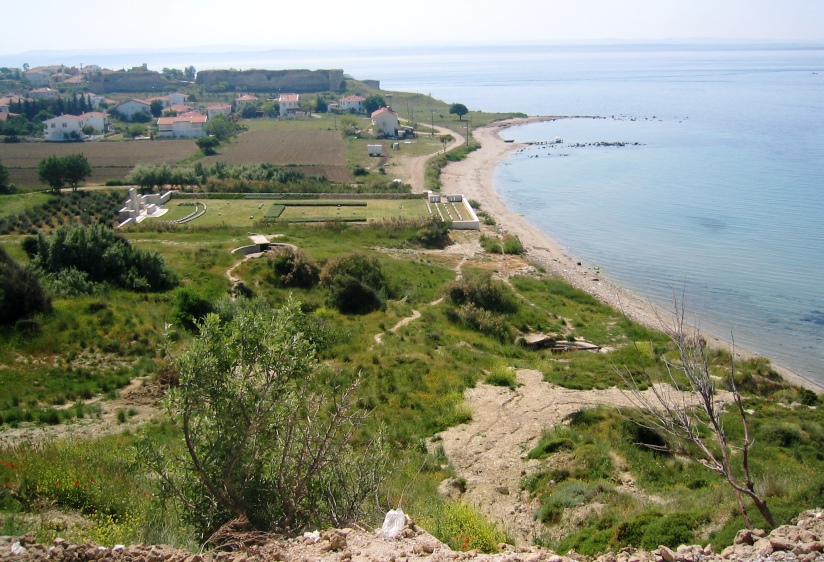 Even though seaplanes are still unable to support him, six days after Admiral Sackville Carden’s first attempt to force the Dardanelles Strait the storms have finally abated enough that he can resume surface operations against the 17th Century forts guarding the entrance. Setting out from the anchorage at Tenedos, Carden plans to have four of his older battleships drop anchor to suppress the Turkish gunners at Cape Helles and Orkanie while another four battlewagons close to bombard the targets at closer range.

As the action begins, it is quickly apparent that the previous daylong bombardment, much of which took place from standoff range, failed to destroy the fortresses. Agamemnon is unexpectedly hit seven times from ten thousand yards, killing three men and seriously injuring five before she is able to weigh anchor. Carden sends the Queen Elizabeth to take her place, and by noon both ships are pouring such a heavy fire into both of the 9.4-inch guns at Orkanie that one is blown from its mounting. As they abandon their post, the occupants are seen swarming over their shattered barracks like ants on a hill.

Meanwhile, the French battleship Galois is briefly flanked by fire from both sides of the Strait as she approaches Kumkale, but by 11:30 she is blasting that fort with such ferocity that it is completely wrapped in smoke. At 12:15, Carden orders the first pair of battleships to make their runs on Sedd-el-Bahr, Orkanie, and Kumkale. By 4 PM, the forts are all silent, and Carden orders his minesweepers to begin making the waters of the Strait safe for his ‘capital ships.’ 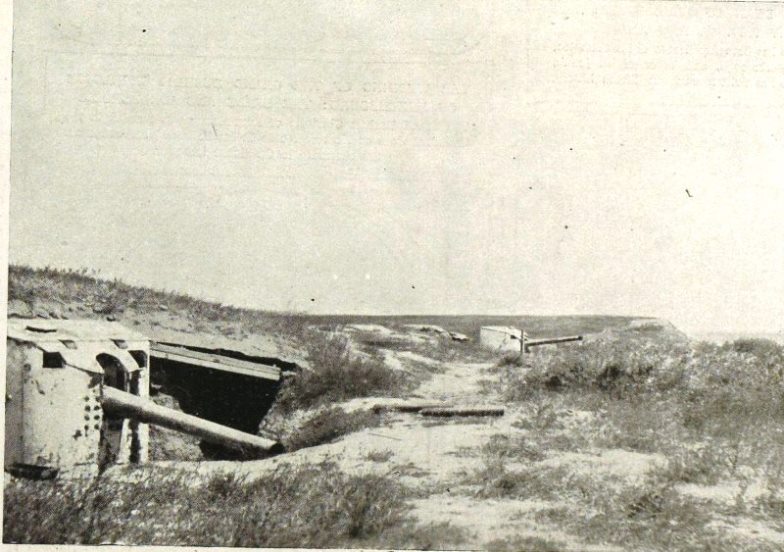 Britain and France have been operating out of Greek territory at Tenedos, Saloniki, and the island of Lemnos since November. Although Carden intends to land marines and sailors with explosives tomorrow to make sure the gun positions are  permanently destroyed, two battalions of the Royal Naval Division are parked in the harbor at Mudros today. Nor will they be called in to support landings tomorrow.

Britain’s War Cabinet is divided between two competing strategic visions, both of which are formed under the constraint of Britain’s small prewar Army. Known as the Westerners, one group wants to focus as much troop strength as possible on the Western Front. The Easterners want to use Kitchener’s new armies — and the gathering mass of colonial volunteers in the Indian Ocean and Middle East — to strike a fatal blow to the Ottoman Empire. In Purnell’s History of the First World War, Don Schurman writes:

Between the Crimean War and 1914, the British Army and the Royal Navy had grown steadily apart in the views they held of their respective functions in a future war. In the past they had always prepared for both a continental and oceanic role. In this period … the planning and practice of combined operations were conspicuous by their absence. It is true that the Committee of Imperial Defence, set up in 1913, was intended to reverse this trend, but that body never managed to secure the co-operation of, much less dominate, official planners at the War Office and the Admiralty.

Content in their ‘splendid isolation,’ prior to the war Britain spent a far higher percentage of its national budget on the Navy than the Army. Although newly-trained divisions are ready to take the front lines, this argument over two competing theatres of war is leading to procrastination in deployment, and it has been exacerbated by a divide within the Easterners over whether to commit a scratch force of 50,000 ANZACs, French Marines, and other troops to Salonika instead of Gallipoli. The Army and Navy barely speak, let alone train for joint operations. Though Carden appreciates the role of landing parties to destroy the damaged guns onshore, his plan is designed to force the Strait without a large land force — making this perhaps the most fateful moment of the whole Gallipoli venture. 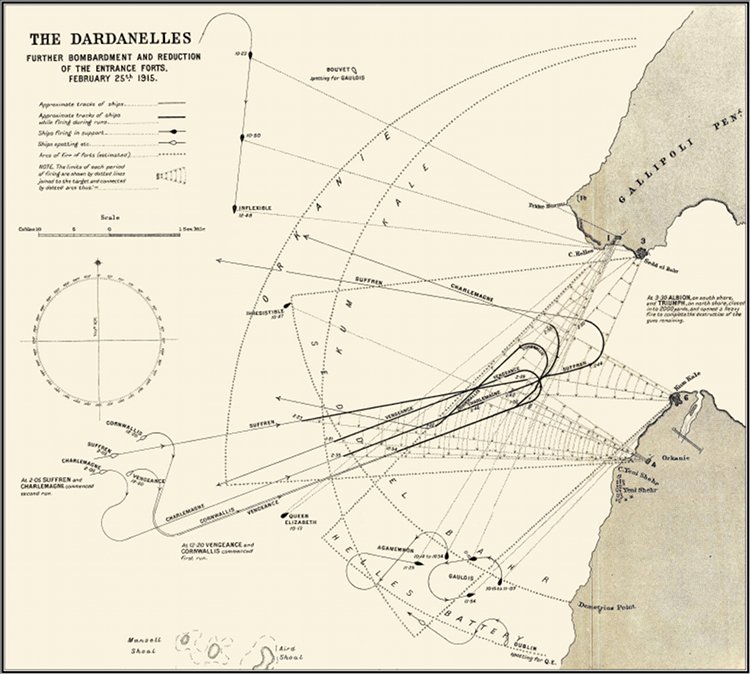 A map of the day’s naval action, which was not followed by landings in force. You can see the full-size version at Naval-History.net

When Carden recalls his ships to Tenedos before the sunset, his minesweepers are already taking desultory fire from land batteries hidden in the hills. Tomorrow, there will be scattered resistance to landings. Forty-five marines and a thirty-man demolition team from the HMS Irresistible land at Sedd-el-Bahr under Captain H. B. N. Panton, who finds himself attacked by superior numbers and is forced to withdraw his pickets. Only direct fire from his ship’s 6-inch guns stops the assault. As soon as the sailors are done destroying the four remaining guns inside the old fort and the two 12-pounder field guns outside it, Panton withdraws.

A similar force is ambushed on the Asian side, losing one sergeant and two wounded, but Lieutenant Commander E. G. Robinson wins the Victoria Cross by destroying the last gun mount at Orkanie before also withdrawing. And then, incredibly, men do it all over again: on the 27th of February, Lieutenant F. H. Sandford leads another demolition party onto the beach to destroy a group of 6-inch Krupp mortars still remaining at Sedd-el-Bahr. With two officers and seventy-eight marines, his covering force is even larger than the day before, and they are well-supported with covering fire from the Irresistible. Sandford wins a Distinguished Service Order for courage under fire, but the Turks are left in control of the beach.

While all these landings are resisted, the defense is uneven, and reinforcements have not arrived, while Britain wastes time landing and leaving. It is only a week from today, on March 4th, that defenders are numerous or daring enough to oppose landings in force. By the time the British Admiralty recognizes that joint operations are necessary to take and hold Gallipoli, Turkey will have three weeks to strengthen and prepare their defenses. The human cost of the War Cabinet’s strategic dithering will be tremendous. 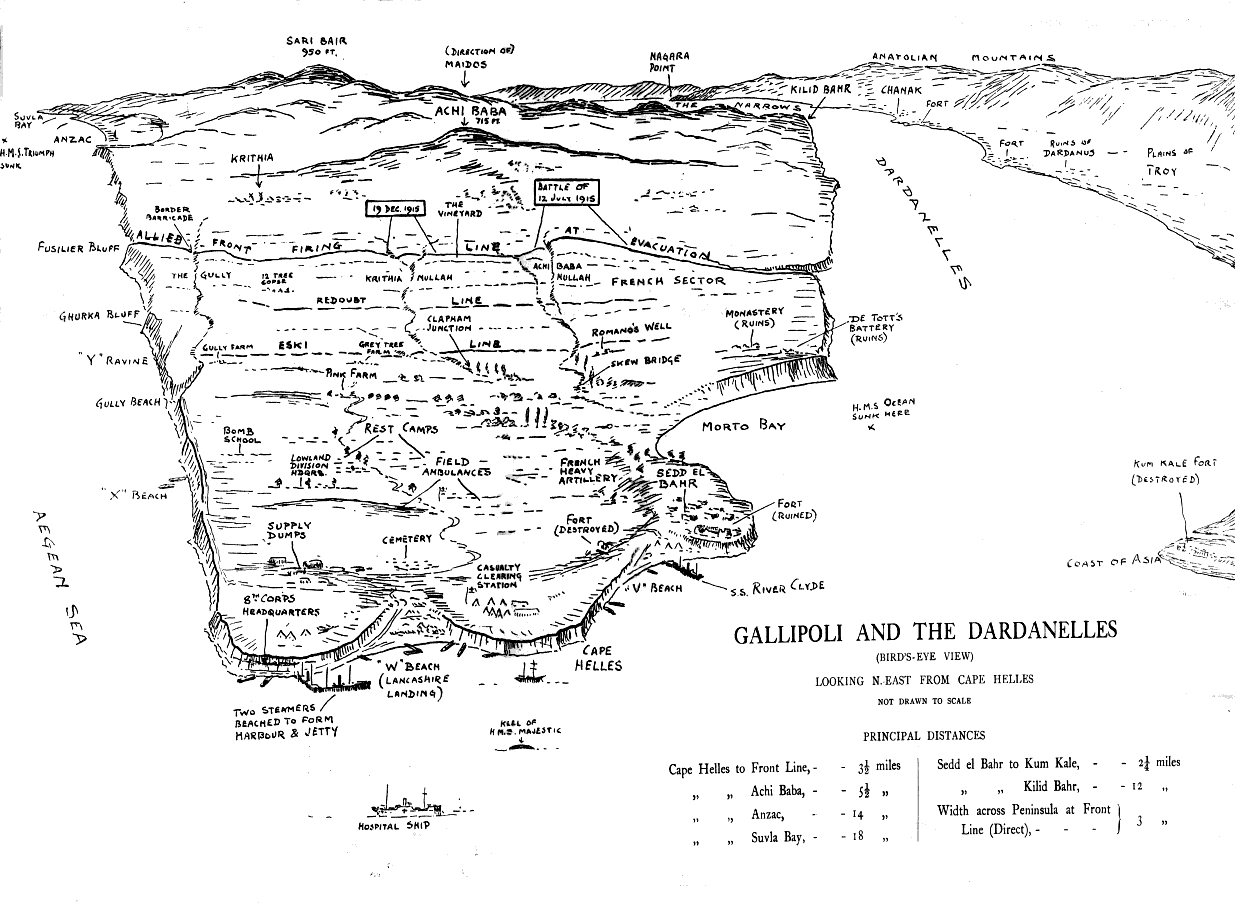 An end-on view of the British toehold on Gallipoli, essentially recreating the Western Front on a small scale. Click to embiggen