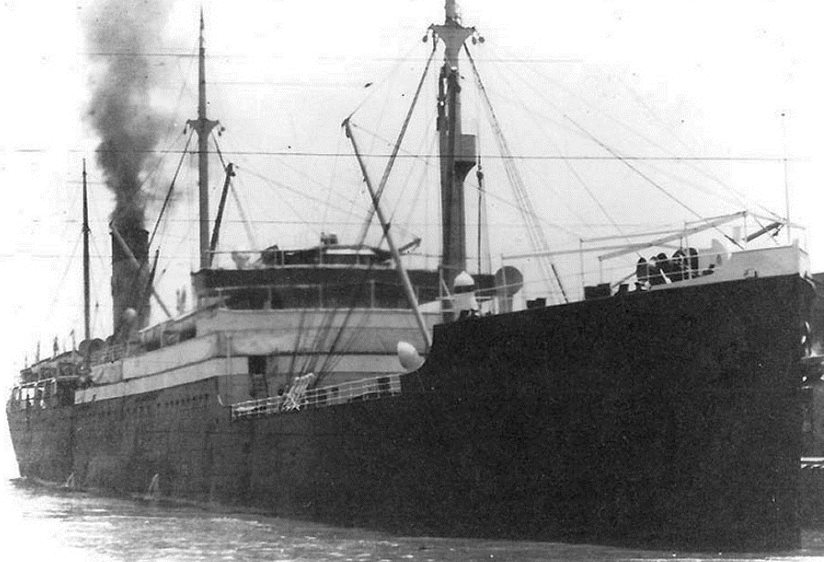 Today, the American steamer SS Wilhelmina (see above) arrives at Falmouth, England, near the end of the Cornwall Peninsula, after a stormy passage across the Atlantic. She is laden with foodstuffs and bound for Hamburg, Germany, so British customs officials search the vessel and take nominal possession of its contents. Tomorrow, Sir James Dalziel asks about the ship during parliamentary question time, but Sir Archibald Primrose only gives a noncommittal answer: “Inquiry is being made as to the nature of her cargo and its destination.”

In fact, the Asquith government is dealing with thorny issues of international law related to the island nation’s blockade of German maritime commerce, and needs time to decide what to do about the ship. While their seaborne campaign is certainly intended to starve Germany into submission, Britain can hardly say so aloud without sacrificing some measure of their moral advantage in the court of global public opinion, especially in the still-neutral United States. After all, just two days ago the British government told their own ships to fly neutral flags in order to avoid being torpedoed by German U-boats — a ruse that the Kaiserliche Marine has already warned will result in the sinking of neutral vessels.

After an intense internal debate, the government finally decides it has the right to keep the Wilhelmina‘s cargo on the 12th of February, claiming that because the German government has instituted central control of the nation’s food supply to deal with the effects of their blockade, the food will inevitably support the German war effort. The next day, authorities announce they will not sell the Wilhelmina‘s cargo in a prize court. Instead, the Commission for the Relief of Belgium will be allowed to purchase the food and use it to feed civilians in occupied areas behind German lines on the Western Front.

Though resolved, the situation points to an emerging new food crisis in Europe, where the normal patterns of trade and commerce have been thoroughly disrupted by the Great War. As opposed to the shell crisis, an ammunition shortage which affects all the combatants, this new food crisis is affecting the entire continent without regard to affiliation or neutrality. Before the conflict is over, millions will starve.

Along the world’s most ancient trade routes, grains and cereals moved from the Black Sea to the rest of Europe

In normal times, Ukraine is a Russian breadbasket that feeds the world, but of course these are not normal times. The Dardanelles Strait has been closed to all traffic since the beginning of October, and with the Ottoman Empire’s entry into the war, the usual flow of grain from Black Sea ports to the Mediterranean and Western Europe has been completely blocked. This effect is not unprecedented: a series of famines and food shortages crippled Europe during the 13th Century when Mongols overran Ukraine and greatly reduced the productive farming population through massacre and rapine. Another famine hit Europe during the Crimean War.

Much of Europe’s farm labor pool is also at war. Indeed, the reason Austria and Germany had planned for a short, victorious conflict was their need to have men home in the Spring for plowing and planting. The normal farm worker migration from Poland to Prussia and back again has also been interrupted by the fighting, creating a critical labor shortage in a German agricultural sector that has been slow to modernize. And things are even worse in Austria, Germany’s ally. 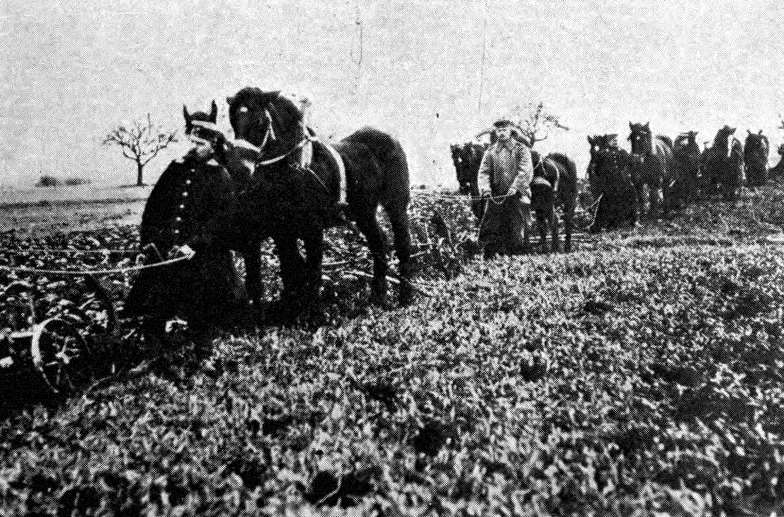 Reporting on the Wilhelmina decision on February 14th, the Chicago Tribune notes scenes of a deteriorating food security situation in the Mediterranean and Adriatic seas:

ROME.-Two Italian steamers loaded with wheat and bound for Venice are reported to have been stopped on the high seas by Austrian torpedo boats and escorted to Trieste, where they were compelled to discharge their cargoes. Compensation of $20,000 was given to the shippers.

VIENNA.-Vienna is seriously threatened with a bread famine owing to the increasing scarcity of flour. The so-called “war bread” is being sold at 20 cents a pound. Efforts of the government to keep down the price have proved fruitless.

ROME.-As a result of the general prohibition of exports from Italy the frontier stations are overcrowded with goods, especially foodstuffs which have been held up by the police. These goods are accumulating to such an extent that storage is impossible.

ROME.-A government commission has been appointed with the object of conducting experiments with a new type of bread in which the proportion of wheat flour is reduced.

The best farmlands of the dual monarchy lie in Russian-occupied Galicia, while Russia had been the Hapsburg Empire’s primary foreign grain supplier before the war. Both Austria and Hungary suffer fifty percent declines in crop yields by 1916, while Hungary — which introduces milk rationing in November and bread rationing next January — has already closed its borders with Austria and refuses to pool resources as a nation. The situation makes the Austrians even more dependent on Romania, a trade partner with one covetous eye on the Empire’s Transylvanian dominions. Bread, flour, coffee, fats, sugar, and milk will all be strictly rationed in April; like Germany, the Austrians fill the ‘grains gap’ with less-nutritious potatoes — until that crop also diminishes.

Food insecurity is a primary cause of human conflict, but our wars invariably make the problem worse. This food crisis will only grow — and will not abate until years after the war ends. 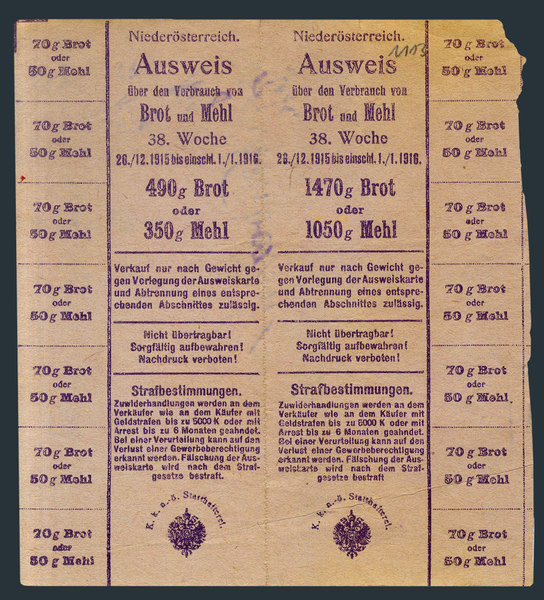 A bread and flour ration card issued in Vienna