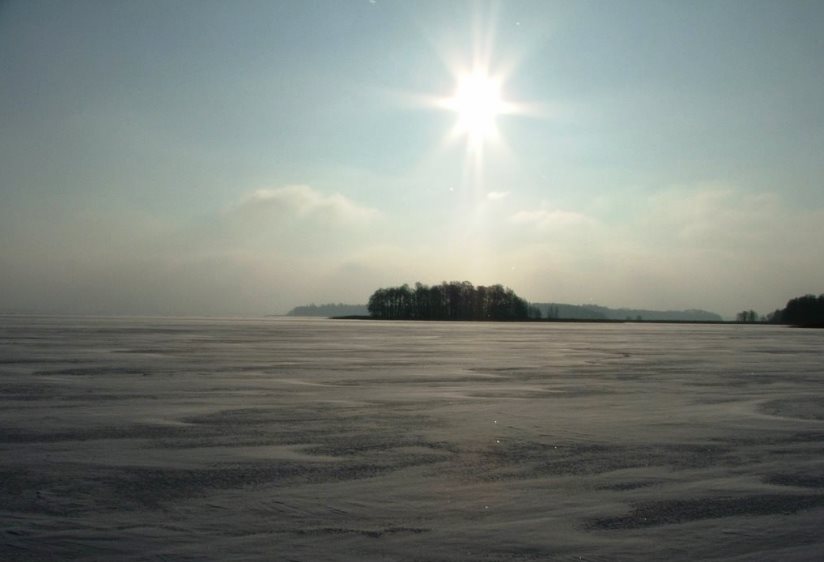 The Masurian Lakes region has already lent its name to an early campaign which, despite setbacks for the German defenders of East Prussia, featured Russia’s most stinging defeats of the war — until this one. The epic Second Battle of the Masurian Lakes begins today in a snowstorm, with thick ice covering the eponymous glacier-carved reservoirs (see above) and rendering the soft, marshy ground and muddy tracks suitable for marching columns.

Paul von Hindenburg, the architect of Russia’s debacle at Tannenberg, aims to knock Russia out of the war by deploying his Eighth and Tenth Armies against the flanks of the Russian Tenth Army, which consists of four corps under General Thadeus von Sievers. The action begins today when General Fritz von Below sends the Eighth Army against the Russian left, storming the town of Johannisburg and advancing from the enemy’s south for ten miles a day over seven days. Tomorrow, General Hermann von Eichorn sends the newly-created Tenth Army against the Russian right, advancing almost as fast.

The second week of fighting is much less fluid, however, as the Russian XX Corps puts up a stiff rearguard resistance in the Augustow Forest. By February 21st, when Hindenburg’s armies finally force them to surrender, the other three corps of Russia’s Tenth Army have managed to get away. The next day, Russia’s Twelfth Army counterattacks, stopping the advance cold.

While Hindenburg has undoubtedly achieved a tactical victory, killing more than 56,000 Russians and capturing over 100,000 at the comparatively low cost of 16,000 German casualties, he has failed to break the Russian Army or end the war in the East. 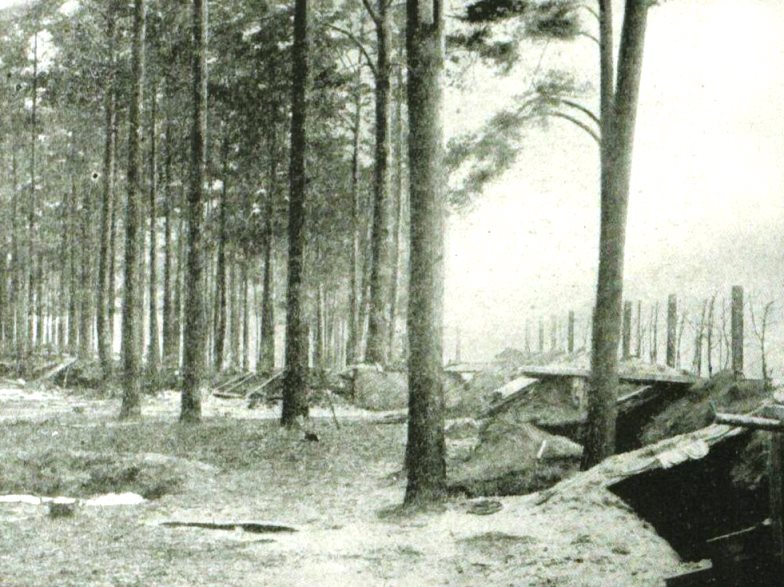 An abandoned Russian position in the Augustow Forest, where Gen. Pavel Bulgakov’s XX Corps was forced to surrender

Overconfidence and poor Russian intelligence also help make this defeat possible. Russian troops in retreat count on the swirling snow to cover their backs, but receive an unpleasant surprise when they billet in East Prussian towns overnight; on the night of the 10th of February, ten thousand Russians find themselves surrounded and captured at Eydtkuhnen and Wirballen. Thanks to good German radio discipline and operational secrecy, commanding General Nikolai Ruzsky is unaware of Tenth Army’s true size and does not appreciate the objective of Eighth Army’s attack until the seventh day of fighting, when he is already nearly cut off. Barely avoiding encirclement and destruction, Ruzsky has almost given Hindenburg a second total victory just like the one last September at nearby Tannenberg.

Indeed, the only thing that saves General Sievers or Ruzsky is the relatively slow pace of German soldiers marching in the snow. Roads are impassible to vehicles and railroads are slowed to a crawl. During a second, even bloodier war to come, motor transport and mechanized armor will provide the Germans with many more opportunities for ‘battles of annihilation’ on the Eastern Front — and military planners will invent the Blitzkreig doctrine to fulfill the promise of Hindenberg’s design — through a simple speed advantage over foot soldiers. 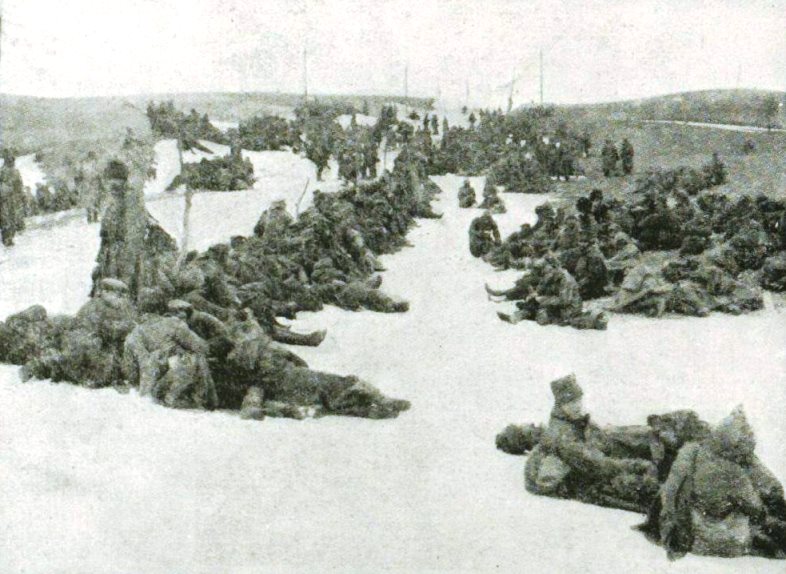 Russian prisoners resting on the march to their new homes in POW camps. Guarding and providing for such huge numbers of captives was a logistical and procurement challenge for Germany, which was already running short of food and raw materials

While successful, Hindenburg’s offensive is merely one part of a much larger series of offensives all along the Eastern Front: General Alexander von Linsingen is leading Fourth Army in an attack aimed at liberating the city of Lemberg, while a third force under Austrian General Borojevic von Bojna spends the next several weeks attacking in the Carpathian Mountain passes with Third Army, hoping to raise the siege of Przemysl. Their failure to advance seals the strategic failure of Hindenburg’s plan to knock Russia out of the war.

Yet Hindenburg still has reason to crow, for he has ejected the Russians from the last bit of German territory they occupied, including the towns of Gumbinnen and Stallupönen where the two armies had their first clash; no Russian will touch German soil again until 1945. Hindenburg’s capable aide-de-camp General Erich von Ludendorff has no difficulty transforming the strategic failure of the Winter Battle of the Masurian Lakes into a glorious, complete triumph for the court of German public opinion.

Finally, this offensive will mark the last time that an Austrian army fights on its own against Russia. From now on, all operations along the Eastern Front will take place under joint command — with Germans leading the way. 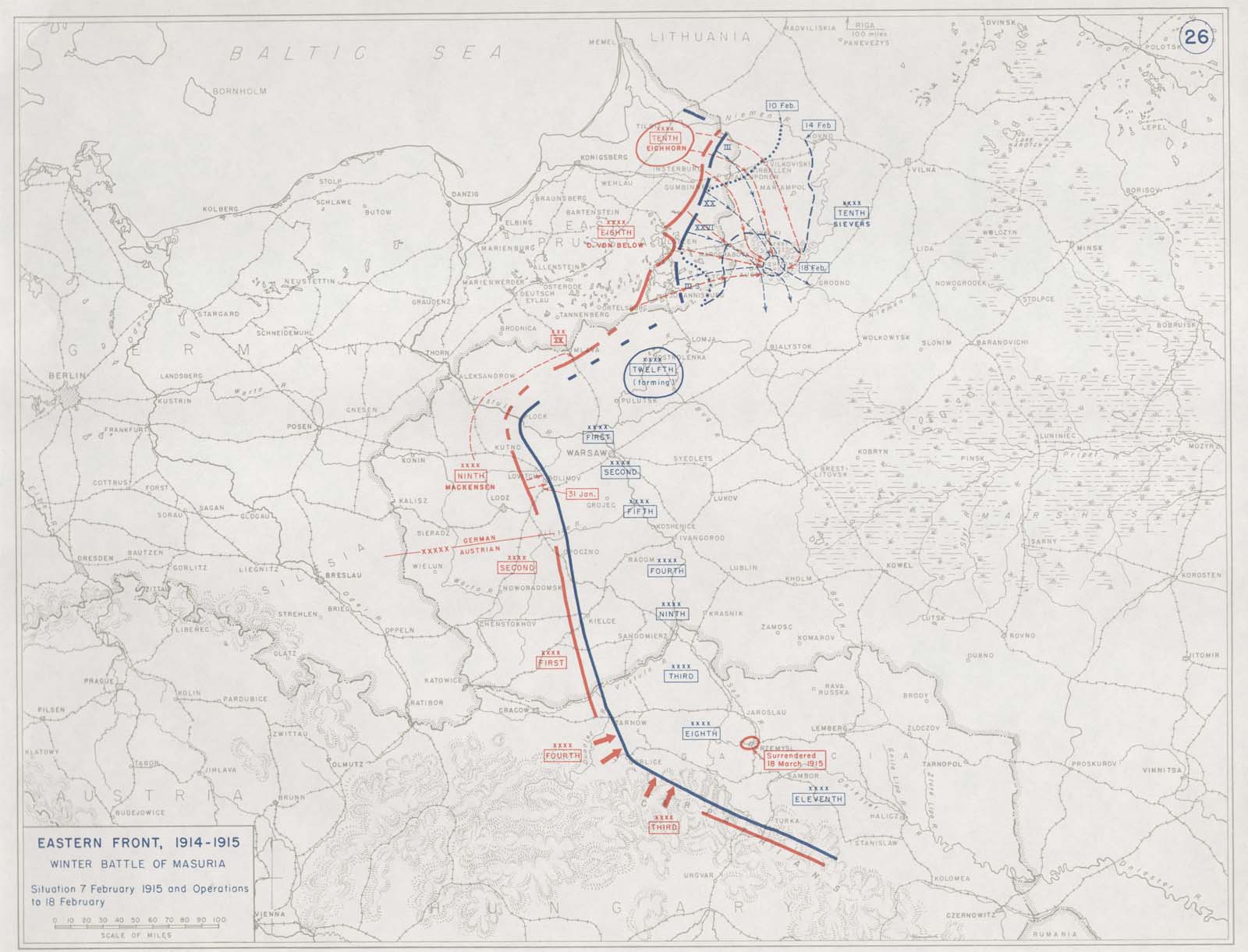 A map of the Masurian Lakes campaign. Click to embiggen