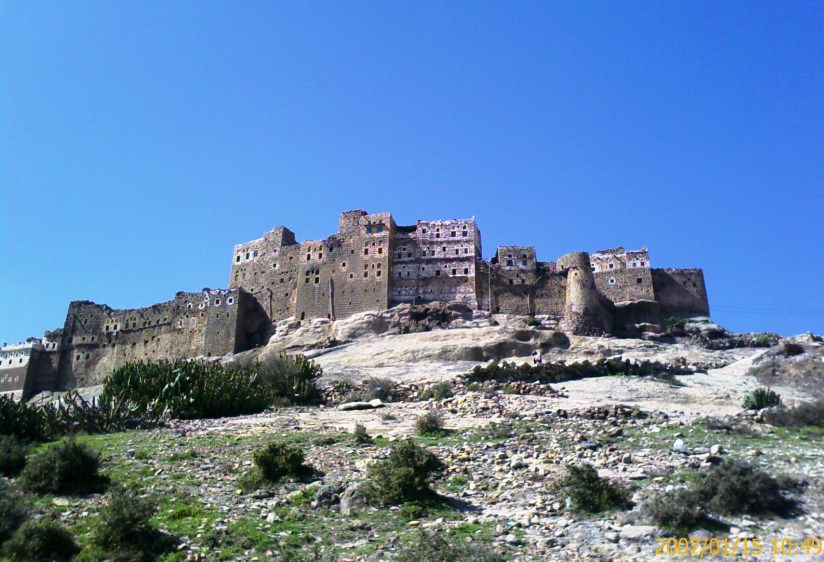 After they escaped the destruction of their ship in November, Lieutenant Helmuth Karl von Mücke and his shore party crossed the Indian Ocean — first in a rotten-bottomed sailboat, and then a merchant steamer. With luck, they managed to avoid British patrols, but the most dangerous leg of their journey only began in January, when they arrived at the entrance of the Red Sea and came ashore in Yemen to avoid a French ship in the channel. Although the Arabian coastline is ostensibly under Turkish control, the tribal structure of the peninsula’s human geography is not always so clear-cut, and loyalties there are fluid. 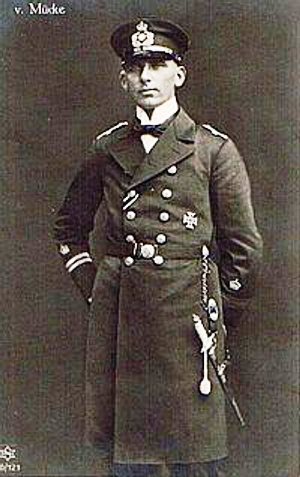 On the seventh day of the new year, Mücke and his men stepped from the surf near Al-Hudayda and soon encountered a hundred armed local fighters who spoke no German. Knowing not a word of Arabic, Mücke struggled to communicate with them until he produced a German gold coin, which they immediately recognized. Suspicions evaporating, the tribesmen became excited and endeavored to help them on their way to the port city. But then things took a slightly comical turn, for as they marched, new groups of tribesmen would appear responding to the same spreading rumor of foreign invaders, causing the whole column to halt so that Mücke’s new friends could make introductions. By the time they finally met Ottoman officers outside of Al-Hudayda, the scene had transformed into an impromptu parade of ululating and celebratory shooting in the air, with everyone clapping in rhythm to the Germans’ marching cadences.

Upon his arrival, Mücke became aware that a British cruiser was controlling sea access to the main Red Sea port of Jedda. He was also disappointed to learn that rumors of a coastal railroad were untrue. Signaling the steamer Choising to find safety at an Ethiopian port, Mücke chose to prepare for an overland journey to Sanaa, where he believed the water and health conditions to be better than the available facilities in Al-Hudayda. For despite boiling all their drinking water and taking daily doses of quinine, by the time they proceeded on the 27th of January, dysentery and malaria were burning through the Emden‘s shore party. This next phase precipitated further comic scenes, for just as very few of his sailors had known anything about wind and sail when they boarded the Ayesha, only his officers have any experience riding mounts. The inexperienced men and their assigned mules, donkeys, or camels struggled to get along with one another, and soon a kind of rear-guard of dismounted men and riderless animals trailed the column, which traveled only in the cool of night. 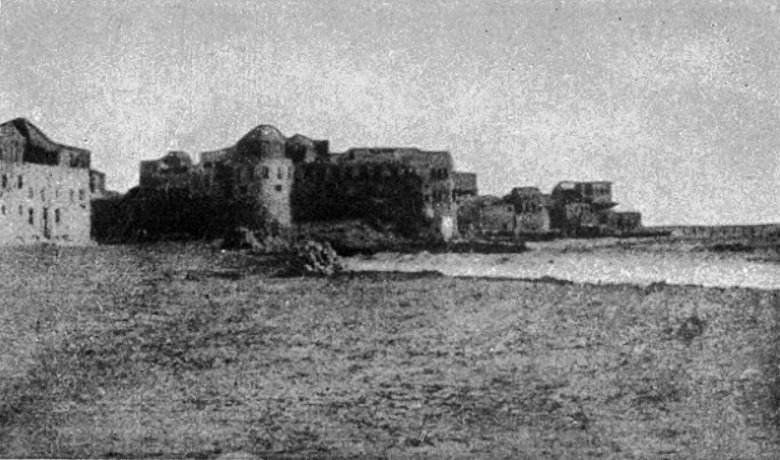 A photo of Al-Hudaydah from Mücke’s memoir, The Ayesha, Being the Adventures of the Landing Squad of the “Emden”

But as Mücke recalls in his account of the Emden shore party’s travels, the adventure took a more sinister turn on the way to Sanaa, hinting at things to come:

The region through which we were traveling was not considered a wholly safe one. Robbery and attacks upon small caravans were the order of the day. As early as the second night out, we had an experience of this kind ourselves. Suddenly, in the moonlight, there appeared to one side of our road a dozen or more men mounted on camels. The Turkish gendarmes that had been sent with us as an escort and to guide us on the way, declared them to be robbers, and immediately got their rifles ready to shoot. When the men on the camels saw the size of our caravan, they vanished among the sand hills quite as suddenly as they had appeared.

Arriving in the high country where the capital of modern-day Yemen is located, Mücke was impressed with the local roads and the brick walls surrounding the city. But he was soon disappointed to learn that the trip had brought him no closer to home.

Unfortunately Sanaa was not as healthful a place as we had hoped to find it. Owing to its great altitude it is very cold there even during the daytime. It takes some time to get accustomed to the climate. A few days after our arrival, eighty per cent of my men were sick with the fever, and unfit to continue on the march. We suffered especially with sudden and severe attacks of cramps in the stomach, and with colds.

[..] After a fortnight spent in Sanaa, we learned that the difficulties of the journey overland were so great, that, after all, it would be impossible for me to get my men safely through by this route. The sickness among them compelled me to remain another fortnight in idleness. By that time, though still weak, the sick had so far recovered as to be able to ride their animals.

Having recovered as much strength as they could in Sanaa, the plucky Germans set out on a return trip for Al-Hudayda, arriving safely. At about five o’clock this afternoon, they leave from Yabana Bay in two sambuks, or dhows (sailboats of ancient design) with the Imperial War Flag flying from the mast of Mücke’s vessel. Their cause seems hopeless: at least three British gunboats are said to blockade the coastline, for which they have no charts or maps for navigation. Beset with lice and cockroaches in their cramped boats, the men must fight their way through windless calms, headwinds, and contrary currents.

Our culinary department was not run on a lavish scale. In each zambuk there was a small open fire-place lined with tin. Here the meals for thirty persons had to be cooked. We tried to make our meals as varied as possible with the limited means at our disposal. Thus, for instance, if we had tough mutton with rice and gravy on one day, we would have rice with gravy and tough mutton on the next, and on the third day, there would be gravy with tough mutton and rice, and so on.

On the evening of their fourth day at sea, disaster strikes when one of the sambuks founders on a coral reef in the darkness. The occupants are forced to abandon their boat and swim to Mücke’s, overloading and nearly sinking it to the gunwales. Throwing everything overboard but his weapons, ammunition, and enough food and water for three days, Mücke manages to fit in all fifty men, including his sickest and weakest, and returns the next day to send divers to recover the two machine guns aboard the wreck. Arriving at the port town of Al-Qunfudhah that afternoon, his exhausted men are welcomed by local Turkish agents, but the journey has been too much for one of them. Seaman Kiel dies on the tenth day of their recovery and is buried at sea in a rowboat; he will not be the last to fall along the way. 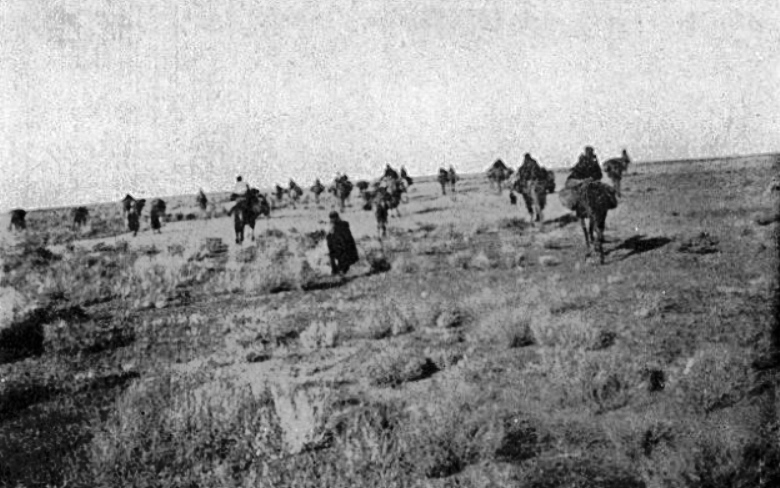 Also from Mücke’s memoir, a view of the Emden‘s shore party and Turkish escorts traveling across the Arabian desert