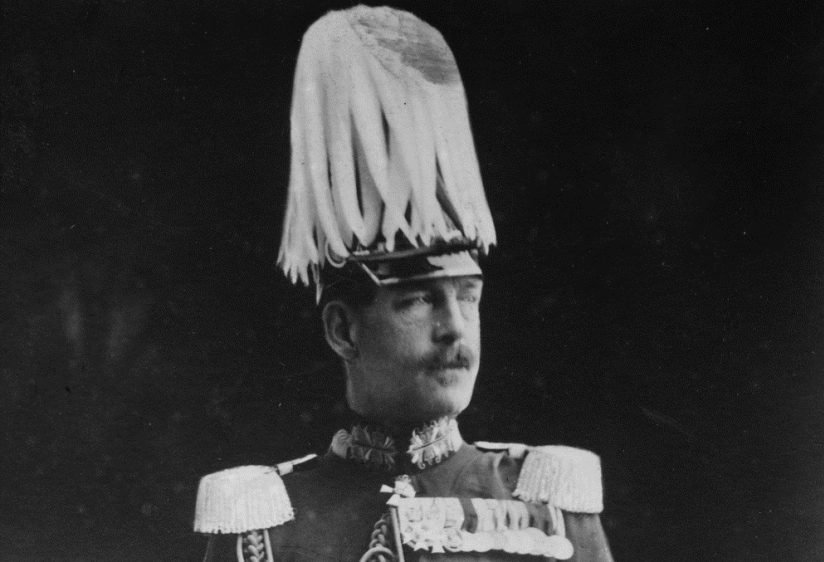 Named by popular demand at his birth, King Constantine I of Greece is an experienced war leader, having seen his nation through one failed war against Turkey in 1897 and the successful Balkan Wars of 1912-1913 serving as commander-in-chief under his father, King George I. As seen above, Constantine’s hat is a pompous affair meant to impress onlookers with the gravity and authority of his station as both monarch and military strongman. The allies of the Triple Entente would understandably love to have him on their side, but his wife Sophie is the younger sister of Kaiser Wilhelm II, and he is pro-German by training, having been educated as an officer in Prussia.

Elefthérios Venizélos is the elected Prime Minister of Greece. A bespectacled and hatless reformer, his name is already spoken with respect by those who call him ‘Ethnarch.’ No one in the country will achieve more to advance the Megali Idea — the irredentist dream of a Greater Greece that encompasses all the ethnic Greeks in Turkey and the Balkans — than Venizelos, who sees an opportunity to win those territorial gains by joining the alliance against the Central Powers. Yet he is no absolutist: negotiating with London, Venizélos has already offered to ‘recommend the sacrifice of Kevala’ and the province of Drama to Bulgaria in exchange for postwar gains in Asia Minor.

These are the two men whose war of wills shapes the Greek nation during the course of the Great War. Royal opposition will continue to stymie a popularly-elected liberal government, preventing Greece from having an impact on the war in 1915. 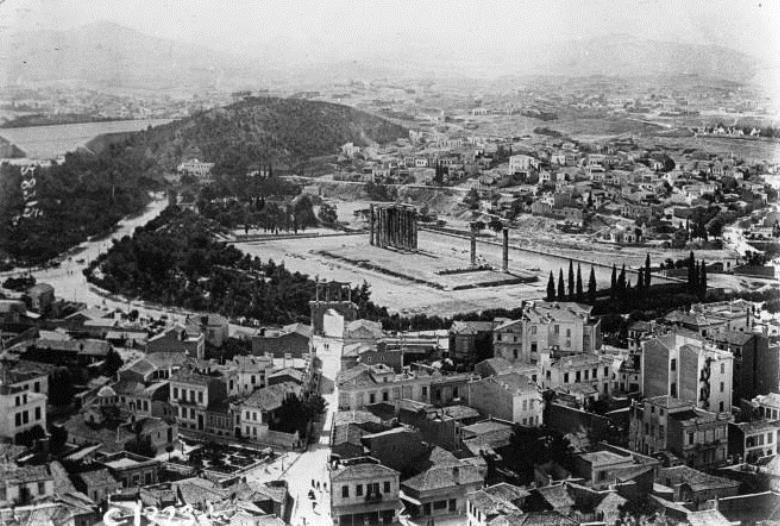 The Temple of Olympian Zeus at Athens in 1915. Though rich in historical treasures, Greece was poor

Today, Venizélos loses a parliamentary vote on Britain’s invitation to declare war on the Central Powers, resulting in his eventual resignation in March. This domestic and diplomatic failure runs contrary to the assumptions underlying yesterday’s consensus in the British War Cabinet for an operation against the Dardanelles, but it will somehow not derail those plans the least little bit. Instead, the original idea of landings at Salonika (now Thessaloniki) to support their Serb ally is morphing into a token force of two brigades, one British and one French, while the troops which had been penciled for that campaign will soon be rerouted through Greek territory to the Gallipoli Peninsula after Winston Churchill’s naval offensive fails to win the Strait for Russia.

Although Venizélos and his party win a huge electoral victory in June, Constantine withholds recognition of his government until August. Greece has a defensive arrangement with Serbia against Bulgaria, but Constantine and his domestic political allies consider this pact void if Bulgaria fights alongside a ‘great power.’ This power struggle and policy battle unfolds while the Gallipoli offensive unexpectedly bogs down — and Bulgaria makes open moves toward a new alliance with the Central Powers. Venizelos wants to formalize the treaty with Serbia; Constantine will only guarantee the alliance if Bulgaria attacks Greece. When Bulgaria finally does declare war on Serbia in October, Venizélos wins a vote to declare war in parliament — but Constantine forces his resignation and dismisses his government.

Through huge strategic and diplomatic miscalculations, Britain gives up the support of one ally to support another without actually helping either of them, creating a cascade of strategic setbacks. After 1915, London will prove far less willing to let Greek democracy decide matters of war and peace. 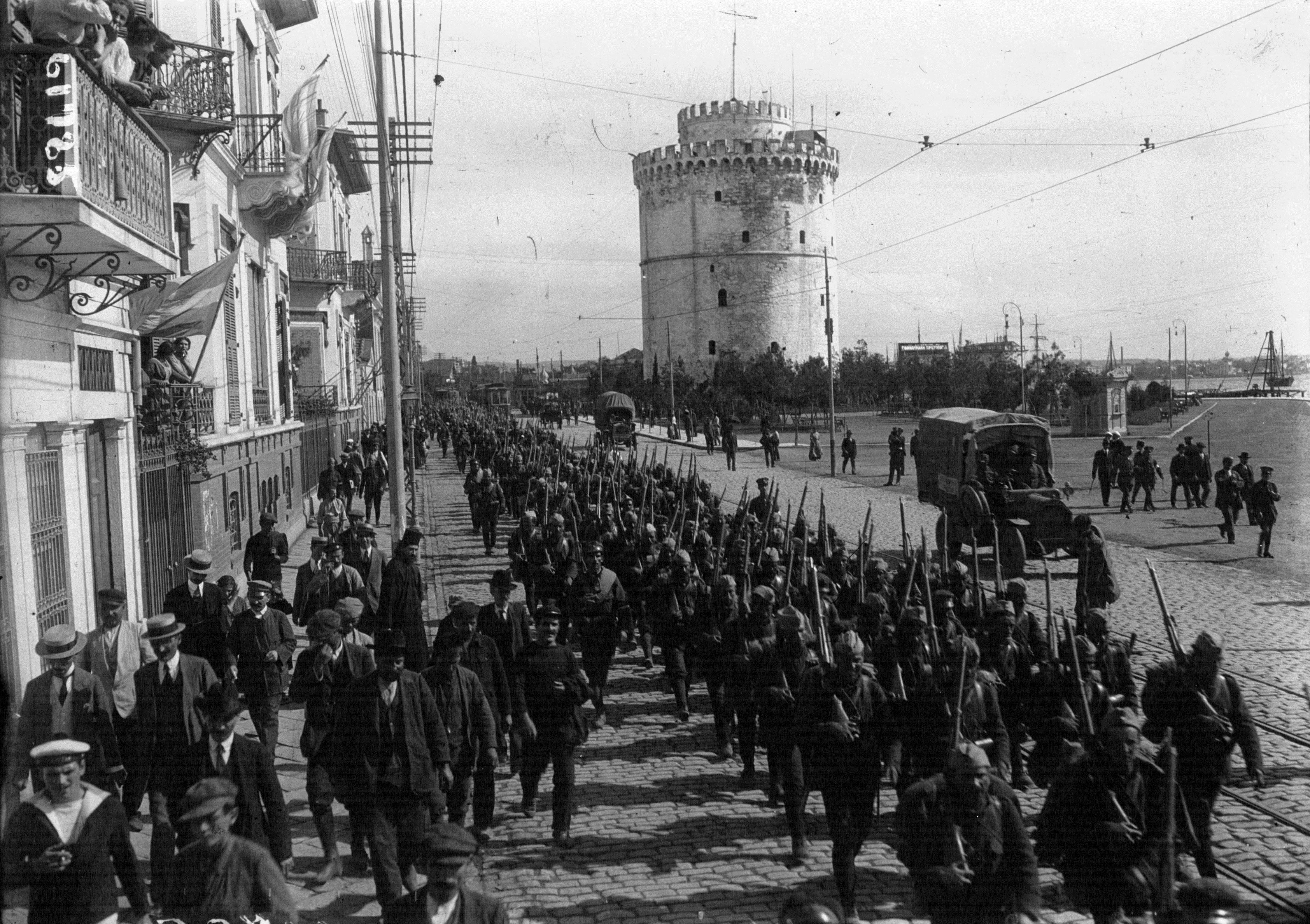 The National Defense Army finally marches to war in 1917. Note the motor vehicles and rails. Though poor, Greece was modern

Constantine is hardly an angel. Appointing a succession of puppet ministers, he will approach the Central Powers for an alliance into 1917, begging for military aid and resentful of the small, yet deeply-entrenched allied force at Saloniki. By then, that presence has grown to two British corps supported by Serbian, Russian, and Italian contingents behind miles of fortified lines and barbed wire. No aid will come to Constantine, however, for his beloved Germans suffer material and monetary shortages that preclude assistance, and are already hard-pressed supporting the allies they have. He has quite simply bet on the wrong side.

Although he is forced to abdicate, allowing Venizélos to return in triumph and finally bring his country into the war, Constantine will return in 1920 after his rival is swept back out of power in the postwar gloom.