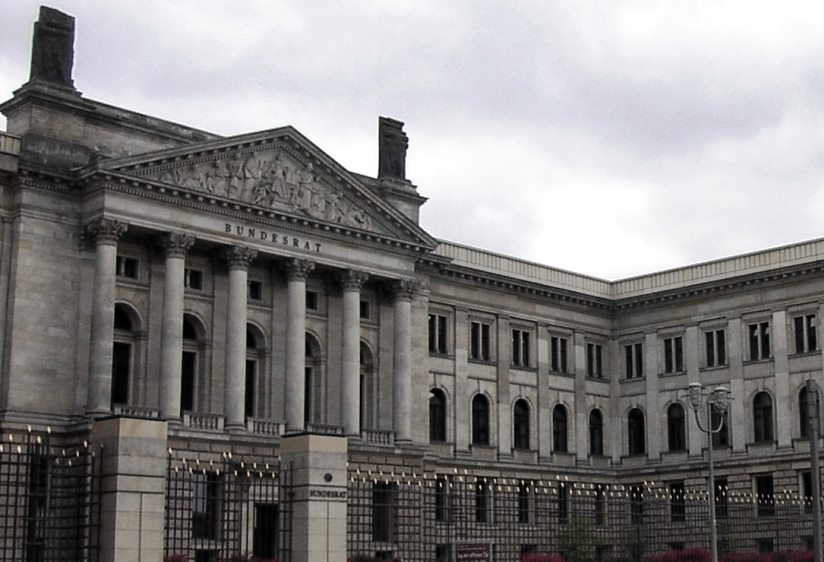 Before the Great War broke out, a fifty-pound sack of potatoes sold in Munich for three marks. Immediately following the announcement, the price jumped to nine marks. The Social Democrats did not accept official explanations for this sudden wartime inflation, instead demanding price limits to forestall social unrest. Clemens von Delbrück, Secretary for the Interior and Vice Chancellor, was slow to respond to the emergency, but he eventually had to choose between allowing the ‘free market’ to starve Germans or intervenion to keep prices low.

In November 1914, the German government set up War Boards (Kriegsgesellschaften) to ration food consumption and set prices. Grain was the first to be regulated, followed by flour, oats, butter, eggs, potatoes, and fish. Price ceilings had the unforeseen effect of heightening the cost of unregulated foods while encouraging consumption of low-priced foods, leaving them scarcer. These problems only became more acute as the British blockade took effect and constricted imports.

By the beginning of 1915, it was perfectly clear to everyone in Germany that broader controls were necessary. Today, the Bundesrat (Federal Council) — a legislative body which represents the sixteen federal states of Germany in a manner analogous to the United States Senate today, and is now housed in the old Prussian House of Lords building seen above — votes to establish complete control of all bread and bread grain distribution, employing private producers with legally-limited profit margins in what amounts to a civilian wartime corps. The law also requires cities to establish reserves of preserved meats.

All of this regulation is to take place under a new Reich Grain Agency (Reichsgetreidestelle). Soon after Delbrück signs off on the measure, the RGA becomes key to Germany’s war on the home front, where hunger and dislocation are already challenging a nation that had been dependent on imports before the conflict started. 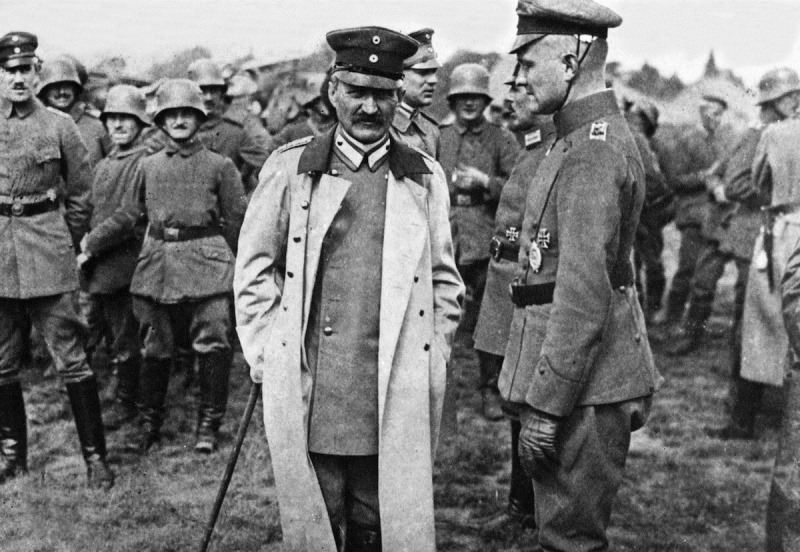 Georg Michaelis meets the Red Baron in 1917. Note that he is wearing a uniform like all the civilians in the Kaiser’s cabinet

The man selected to lead the RGA is George Michaelis, an attorney who has served for five years as undersecretary to the Prussian Treasury. A bureaucrat by temperament and training rather than a professional politician, he is to become one of the most important men in the country, presiding over a capitalization of 70 million marks before the end of 1915 and virtually assuming command of the entire German wartime food economy in 1916. In fact, he will be made Chancellor for a three-month period during the 1917 constitutional crisis brought on by the forced resignation of Theobald von Bethman-Hollweg, becoming the first man to serve in that office without a noble title since the Hohenzollern monarchy began four centuries ago.

We can judge the RGA’s success by the price of a loaf of bread, which remains relatively stable through 1917 without any severe shortages, but only by increasing the amount of rye (and later sawdust) added to the flour and issuing ration cards this Summer that limit citizens to so many grams per day. Where the RGA organizes most or all of the entire supply chain for a commodity, its price controls and substitutions work very well to fairly well; yet by June and September of this year, it will become necessary to issue two decrees against profiteering.

To help enforce the RGA’s control over the food supply, Price Investigation Offices are set up at local, regional, state, and national levels. Local authorities are empowered to regulate manufacturing, production, dealing and trading, and consumption. They can even organize the supply of necessary materials to the exclusion of private businesses if necessary, or force private producers to form cartels — all measures that were unthinkable in peacetime.

By October, the list of controlled items is expanded to include milk, pork, buckwheat and millet, vegetables and fruit, jams, honey, and all sorts of sugars. Most notable are the controls on oils and fats, which are not only used for cooking and industrial uses, but also for soap. By the end of the year, detergents will be rationed to less than two ounces of solid soap or 4.4 ounces of powdered soap per month. The state solution for this ‘cleaning crisis’ is kreigseife, or war soap, that is made with a minimum of fats and a maximum of clay, fine white sand, and potash. 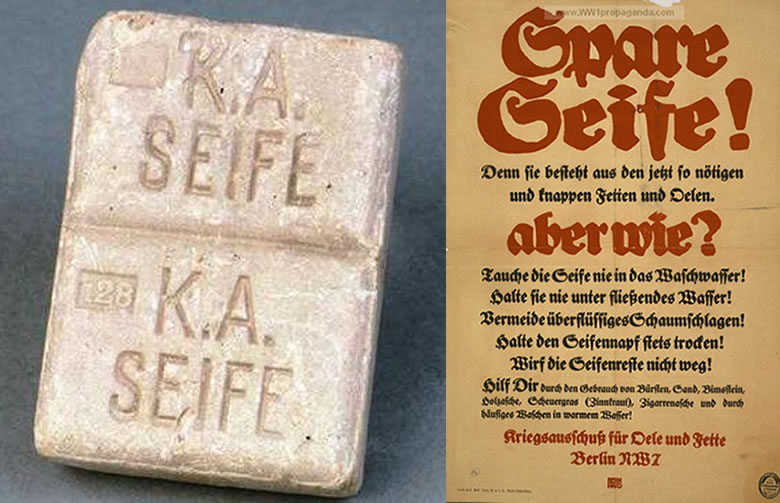 Left: a kreigseife ration kept by a British POW. Right: a poster tells Germans how to cut back on consumption of soap and oils

Perhaps lulled into complacency by the bumper crops of 1913, Germany was unready for a poor harvest in 1914. The crops are no better this year, and in May of 1916 the Reichschancellor receives sole power to regulate imports, exports, and transit traffic in food commodities. Animal feed and raw materials for livestock management also fall under his complete authority. Yet all of this centralized control actually encourages circumvention. Products are sometimes converted into unregulated forms or relabeled as foreign goods, allowing producers to charge higher prices.

In 1917, when official prices are three times higher than prewar prices, illegal and unregulated black marketeers will account for as much as half the supply of eggs, meats, and fruits, and a third of the nation’s dairy products. Despite charging as much as ten times the prewar price for these items, the black market nevertheless becomes a critical supplement to the official ration limits, which are far too low. Before the war, the average German laborer consumed 4,000 calories a day; by the end of the war, the median laborer will only consume about a quarter to a third of that amount, leading to widespread hunger and malnutrition.

Germany is unable to control inflation in the course of the war, and one major reason is the country’s failure to bring food producers entirely within the ‘compulsory economy’ (Zwangswirtschaft) from the beginning. Unintended consequences abound, for not all of the RGA’s decisions are wise or constructive: a mandatory slaughter of pigs this Spring over fears of a potato shortage removes their manure from the fertilizer cycle, further decreasing the harvest.

The Great War is the end of the first great era of free markets and free trade — and the beginning of centralized state economies. Purist opponents of government intervention often invoke Germany’s wartime experience as an example of why they feel as they do, but few of them can articulate an effective alternative to the challenges created by Britain’s blockade and Germany’s dependence on imports. This is the age of total war, after all; entire societies are being weaponized.

The amazing gals at Bubblegenius.com have agreed to send a special bar of war soap to everyone who contributes. Help me tell the story of the Great War — and stay clean — with a gift of $10 or more! This offer is already extended to everyone who has already given, but be sure to include your mailing address in the transaction so they know where to send it.