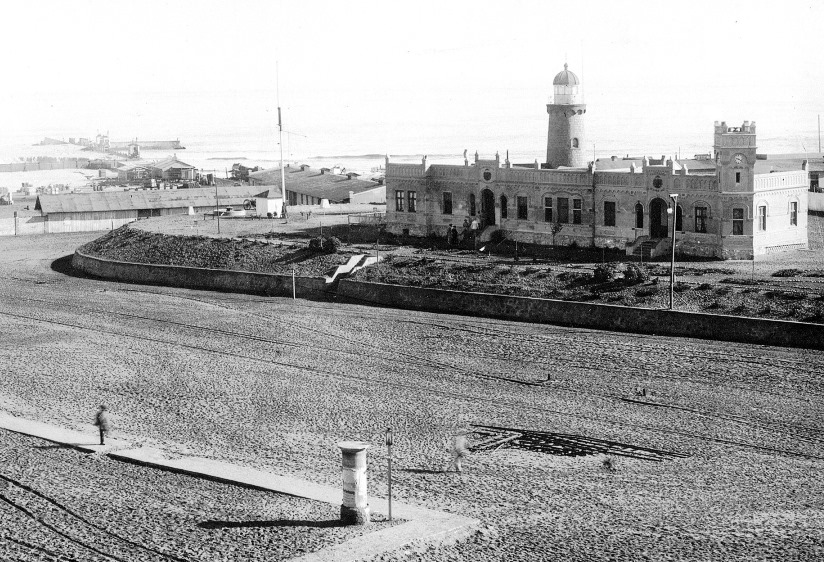 During 1908, the same year in which modern Germany’s first experiment in genocide ended, rich diamond fields were discovered in the Namib desert. Infrastructure improvement had been slowed by inertia, corruption, and disinterest until then, but afterwards the crown made rapid improvements to the country, laying more than six hundred miles of track — mostly by forced labor — before the Great War began. At most key points of their fight over the Kaiser’s African colonies, the British Empire arrives by water, and always with the objective of seizing railheads and railways.

Transportation infrastructure plays a big role in Prime Minister Louis Botha’s invasion of German Southwest Africa and his efforts to incorporate it into a South African empire. Indeed, Botha occupied the southern port at Lüderitz Bay in September, but his plans to invade the land that will one day be called Namibia were postponed by a domestic rebellion that has now been suppressed. With the last remaining Boer insurgents rounded up three days ago, Botha’s transition back to offensive operations starts today with an unopposed landing at the central coastal town of Swakopmund. 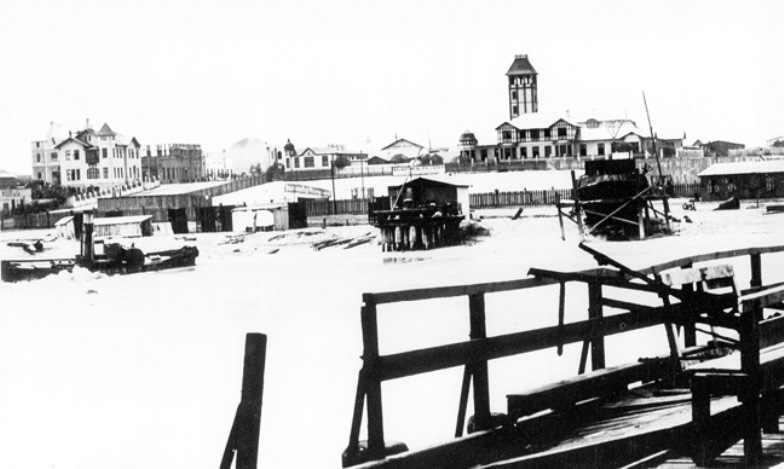 A reverse view of Swakopmund harbor from a jetty in 1914/15. The distinctive lighthouse, Woerman House (tower, background) and steel jetty (foreground) still exist; the community has become a bustling tourist destination

The Namibian coastline is long and regular, with only the one natural deep water harbor at Walvis Bay a few miles south of Swakopmund along the Skeleton Coast. With no quay or breakwater, the facilities at Swakopmund offer zero protection against storms, and are long empty of merchant vessels when troops arrive today. Indeed, the town has already been abandoned by the colony’s defenders, who have removed the lighters (small boats used to unload cargo) by putting them on the railroad tracks and rolling them all the way to Otavi five hundred miles inland. To delay pursuit to the interior capital of Windhoek, Governor Theodor Seitz and Schutztruppen commander Victor Franke have torn up the rails fifty miles inland and taken the locomotives and rolling stock with them.

One of Botha’s first tasks will be to replace the missing infrastructure; this happens quickly, for he has anticipated the need. On his orders, a three hundred mile rail line has been under construction from Prieska, in South Africa territory, to Kalkfontein in Namibia since August. The work will be finished in May, just as his plan to surround Windhoek, approach it from every direction, and force a German capitulation is coming to fruition. All this repair and extension work goes on through the day in sweltering heat and at night under flood lamps powered by a generator. Most of the work is done by paid African recruits, including survivors of the Herero genocide who had previously been forced to lay tracks for free. But the most dangerous sections are laid by the burghers themselves, who alternately labor and fight as needed.

The uprising has never stopped or slowed this work, even with the rebel leader Manie Maritz on the loose near the border of German Southwest Africa and the South African Union. Whereas Botha already has more than twenty thousand Boers in his army, only a few thousand ever took up arms against him. Maritz is now operating in the south of the German colony, but his shrinking command is swiftly being outflanked and outgunned. They will surrender on the 4th of February while Maritz flees to Europe marked as a traitor. He will return after the war, pay remarkably little price for his disloyalty, and become an unapologetically racist fan of Adolf Hitler. 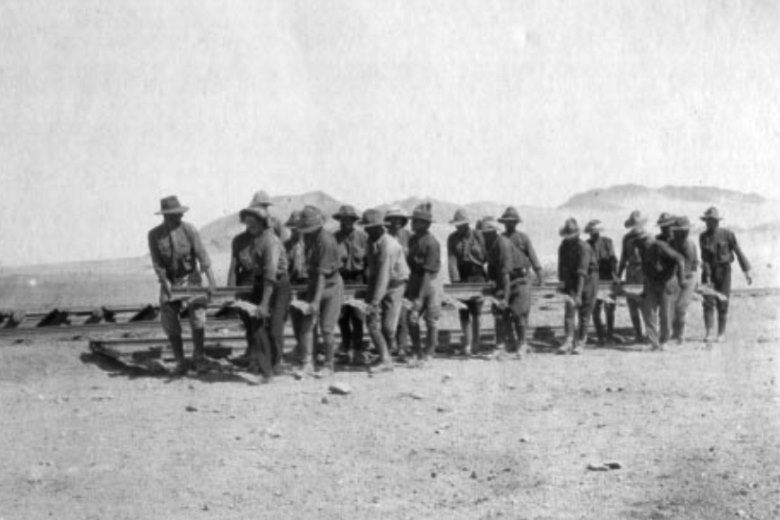 South African troops laying a narrow-gauge railroad between Rossing and Jakals Water. Note the word “water.” Via this essential essay on the role of railroads in Botha’s imperial project in Namibia written by Professor Giorgio Miescher

To win a war in desert terrain, armies need access to water. By seizing and restoring the railways, Botha is able to move large numbers of men overland with a constant supply of water as well as ammunition and food. Because human communities are also generally located at water sources, his tracks effectively link the country’s watering holes together as his troops take them, thus denying those same critical waypoints to the German defenders. By late May, most of the country is no longer a safe place for Franke’s men to operate.

The resistance is resolute nonetheless. Armed with a few primitive airplanes, the German Schutztruppen dropped small bombs on a South African camp at the railroad station in Tschaukaib a few miles inland of Lüderitz Bay in December. But there are not enough aircraft or explosives to make a significant difference, and they are badly outnumbered on the ground. When the end comes in July, it is largely because their courage cannot make bullets and shells magically appear. Cut off from the factories and resources that would otherwise resupply their defense, the German colonists are forced to capitulate before Winter sets in south of the equator. 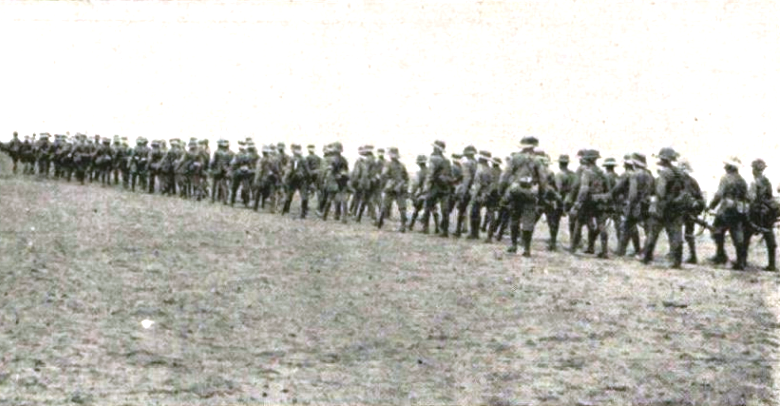 South African Union troops marching towards Swakopmund. Even after the rails were torn up, the remaining railway paths often became a key navigation guide in the featureless terrain, and most fighting took place near them