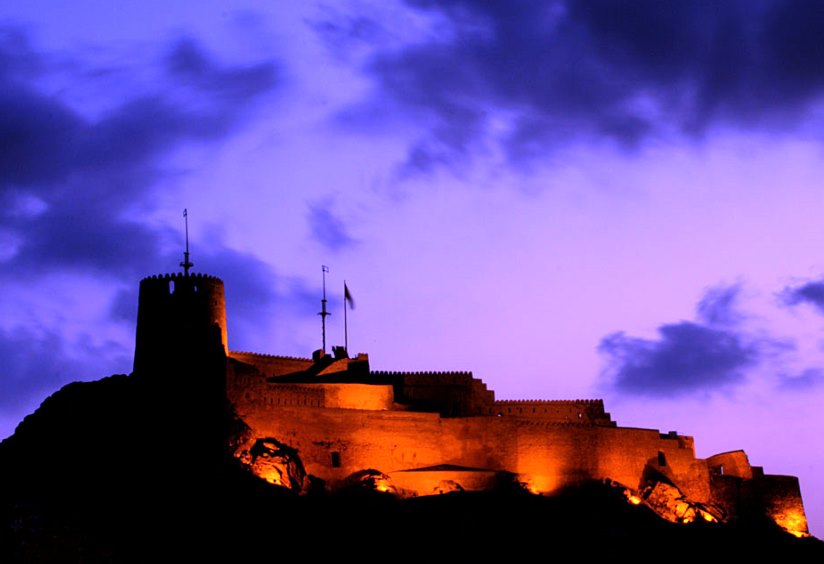 Sitting astride the crossroads of the Persian Gulf, Arabian Sea, and the ancient trade routes from the Red Sea, India, and the eastern coast of Africa, Oman was always a strategic location. Seeking a safe route for silk and spices, the Portuguese ruled Muscat during the 16th and 17th Centuries, leaving their mark in dozens of fortresses dotting the Omani landscape. While the British Empire has similar concerns, their presence here in 1915 is also aimed at keeping the slave trade shut down. Three successive sultans have signed treaties with London to forever eliminate the forcible traffic in human beings.

But there are side effects to the European presence. One of them is the booming trade in small arms, for the men of the Arabian Peninsula are proud sons of a tribal warrior tradition. Still wielding their distinctive curved swords and small shields made of tough rhinoceros or elephant hide, the sons of Arabia have nevertheless become so enamored of modern rifles that in 1912, Major Grey, the British consul in Oman, called for measures to suppress the burgeoning ‘gun culture’ that Britain had helped create by arming ‘friendly’ tribes against the ‘unfriendly’ ones.

As things are at the present, it is the ambition of every bucolic Arab to become possessed of a rifle and cartridges, and money that might profitably be expended upon improving his social condition is hoarded up until the necessary sum has been collected, while the universal possession of fire-arms by people increases the inevitable bloodshed in each case of an intertribal quarrel. Hence, for the Omani’s own sake, it is better that the wholesale importation of arms should cease.

Efforts to control the ammunition supply have proven counterproductive, for they only succeed in making non-British rifles more popular. A second attempt to control the small arms trade by establishing a central depot under the Sultan has only exacerbated tensions. To make matters worse, German agents have been distributing their own rifles and ammunition to Omani tribesmen of the interior in a bid to undermine the sultanate and harm British power in the region. Aided and abetted by the Kaiser’s men, Islamist rebels began an uprising in July of 1913 to restore the Imamate and eject the British from their new Islamic state. 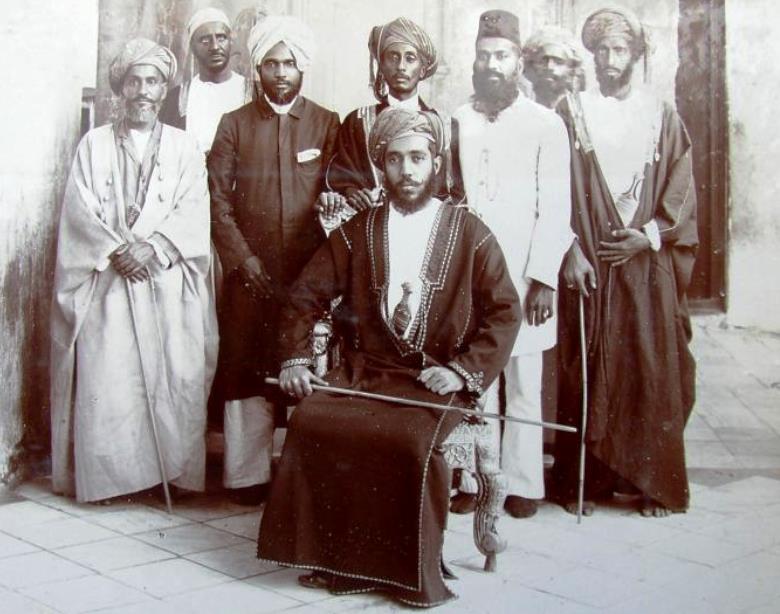 Sultan Taimur took the throne upon his father’s death that October, but his government is heavily indebted and weak, and he has been unable to quell the nascent rebellion by negotiation. Anticipating an attack on Muscat, Britain has brought a battalion of Baluchi soldiers to reinforce their Indian sepoy garrison here. Joined by the Al Harthy tribe, the nascent uprising finally arrived in force yesterday, attacking the outer fighting positions around the fortress at Bait Al-Falaj and winning one of them after a series of bloody charges. Private Nand Ram earned a posthumous medal for staying behind to defend his mortally-wounded comrade when the rest of his squad was forced to fall back for lack of ammunition.

British forces strike back today. Supporting his advance with two machine guns and the Sultan’s troops, Lieutenant Colonel S.M. Edwardes orders a full frontal assault from Bait Al-Falaj against hills and ridges occupied by as many as three thousand tribesmen. Despite being outnumbered three to one and moving through open terrain under constant fire, the British counterattack succeeds in driving the Islamist rebels from their positions by noon. Between three and five hundred of them are dead, their bodies left behind in the retreat. Three more sepoys will be awarded medals for their courage under fire today. 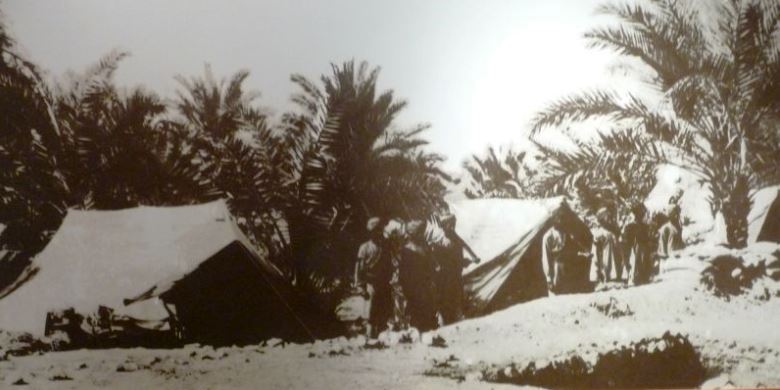 Indian troops pose in front of their tents at a British army camp in Muscat, 1914

The back of the rebellion is broken, and some of the tribes seek a peace with Sultan Taimur after today, yet he is unable to establish central control of the country. It is not for nothing that outsiders will refer to “Muscat and Oman” for decades to come, as if they were separate entities. British agents fan out across the countryside to counter Ottoman and German intrigues that further threaten their interests. Yet the Great War merely exacerbates the problematic arms trade in the region with wave after wave of surplus weapons. Writing in 1917, British diplomatic fixer and Middle East specialist Mark Sykes, a protege of Lord Kitchener during his term in Egypt, despairs of ever being able to reign in the market:

(I)mmense masses of modern arms have already been issued to natives in Persia, Arabia, and Turkey, and these will spread in all directions…there will be such a glut of rifles in all countries, neutral included, that it will be impossible to prevent their becoming very easy to get at for those who want them. If there are 10 or 12 million spare arms in the world, five or hundred thousand will be trafficked, and such a number is enough to arm every black man who wants a rifle.

As in Morocco, where a French column was destroyed by tribal rebels in November, today’s fight underscores the dual directions of history at work in the Great War. On the one hand, the process of European colonization in Africa and Asia is still incomplete; on the other hand, it is already being diminished by European rivalries that have extended into their distant colonies. Indeed, by tearing the Arabian Peninsula away from the Ottomans, Britain creates the Arab states of the 20th Century. We are still dealing with the results of their successes — and failures — today. 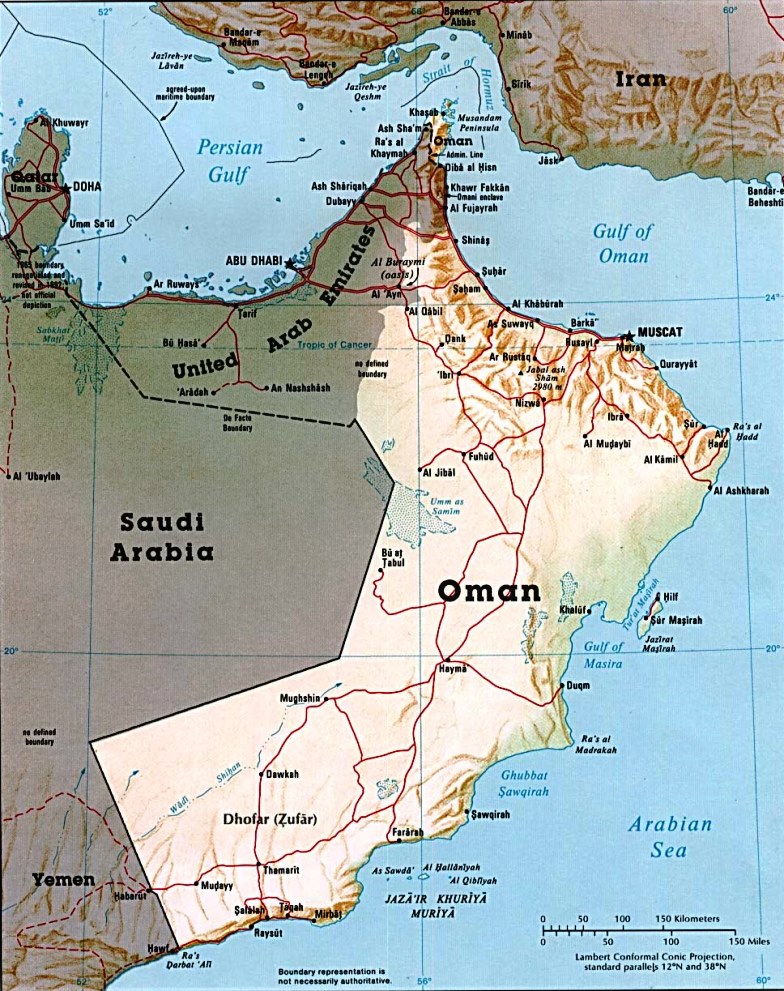