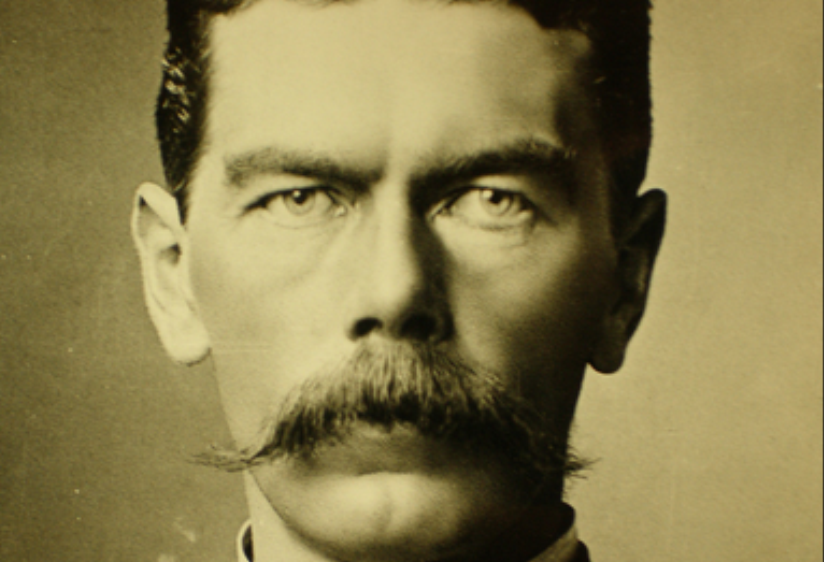 I have always thought actor Kevin Bacon was born to play Lord Kitchener in a biopic. Bacon might just earn a nod from the Academy simply for growing a reasonable facsimile of that magnificent mustache, which is perhaps the second most iconic mustache of the 20th Century and undoubtedly the best kisser-cushion of the Great War. In an age of impressive lip hair and powerful men in uniform, Field Marshal Horatio Herbert Kitchener, 1st Earl Kitchener, stands supreme.

By the end of 1914, Kitchener’s mustache had already been plastered all across Britain with his pointed finger in the foreground, solemnly informing the passer-by that he wants them to serve their king and country. Kitchener’s name was not even printed on the poster, as his face is already recognized everywhere thanks to his marvelous nostril-warmer. The poster’s pose will be copied by James Montgomery Flagg to inspire Americans with a goateed, mustache-less Uncle Sam, losing something majestic along with Kitchener’s remarkable sip-soaker.

Speaking before the House of Lords today, Kitchener explains that a household survey of the United Kingdom has found 218,000 men willing to serve “if called upon.” It is a verbal hedge of his all-volunteer recruiting strategy. Although he has already mobilized an impressive number of men, enlisting nearly 480,000 troops just by the second week of September, doubts linger about the sustainability of an all-volunteer force.

He notes a laundry list of recent allied gains: a Turkish defeat in the Caucasus, Austrian losses in Galicia, Russian advances in Poland, French successes in Alsace and the Vosges, the suppression of a rebellion in South Africa, the invasion of Mesopotamia, the blockade of East Africa, Canadian doggedness, German defeat in Kamerun, the courage of Indian troops. He even mentions tiny Montenegro, which has just claimed a victory by sweeping through a patch of Bosnian territory. Serbian resistance to the Austrian Kaiser draws his special praise.

A deceptive optimism is creeping into British war policy, and today is just one example of that very dangerous development. 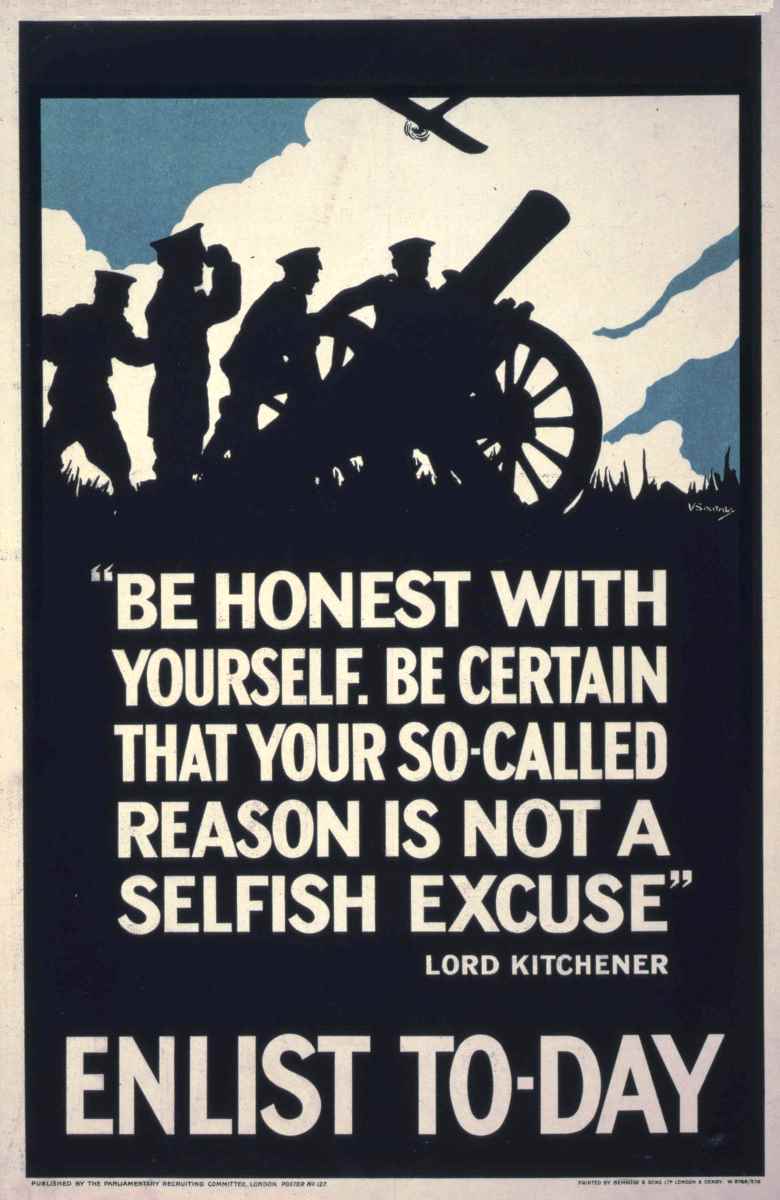 Britain has already sent a quarter of a million men to the Western Front, with more arriving all the time. Kitchener has raised entire battalions from local communities, with men wearing makeshift uniforms and sometimes drilling with umbrellas or sticks until rifles became available. After the horrific early days of the war, and during the bloodiest days of October, the awful body counts have only resulted in recruiting surges. Slowly but surely, civilians have been taught to march and shoot and drill; as a result, Kitchener now commands a larger force than the one which is actually fighting. He will exercise some influence in how it is used, and he is not eager to see his army chewed up in the cauldron of the Western Front.

Upon the conclusion of his remarks, George Nathaniel Curzon, 1st Marquess Curzon of Kedleston, rises to say that the Lord’s projected need for the mobilization of two million men is too small by half. Ever the champion of Empire, Curzon wants more specific signs of progress in manpower recruitment from Britain’s far-flung colonies. Thus the issue of wartime recruitment is framed as a competition between the professional soldier and the expansionist dilettante, a competition of theoretical numbers with no discussion of what to do with such an abundance of armies. Nevertheless, that matter is already being decided right now.

Kitchener wants to attack the Central Powers from the flank, preferably with strategic surprise. The government has pledged to attack Turkey, and while Kitchener favors a move on Constantinople through Greece, Winston Churchill is already planning a naval assault on the Dardanelles. In an example of the phenomenon we now call ‘mission creep,’ the government will send an imperial army to its doom in a failed bid to force the Strait open and clear a path to supplying Russia with ammunition.

It is a complete reversal of the past century of British policy, but that rates no mention in the discussion among Lords of the Empire. Nor do they speak of the ongoing shell crisis, or Kitchener’s procurement priorities that send too many shrapnel shells to the front and not enough high explosives. Britain will waste tens of thousands of lives trying to solve Russia’s shell crisis when they cannot even resolve their own ammunition shortages. 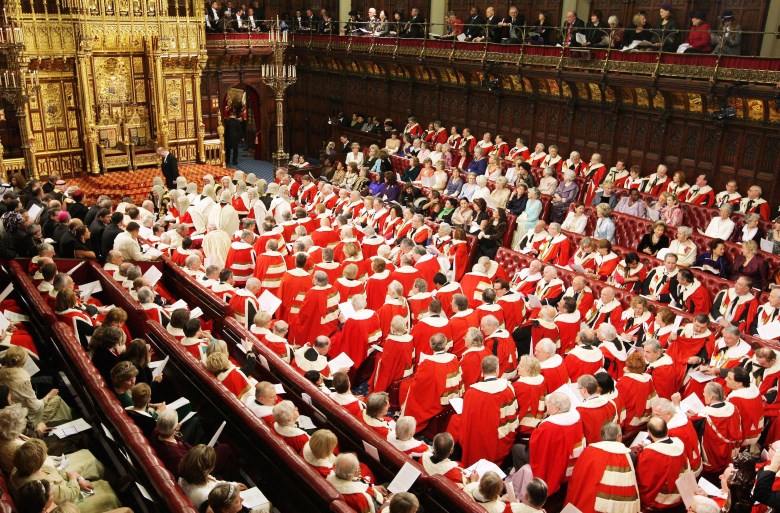 The only practical difference in today’s House of Lords? All the women in the room. Dominic Lipinski/PA Wire

In a public speech at the Guildhall three days later, with members of the cabinet attending, Kitchener announces the registration of males fit to bear arms between the ages of 19 and 40, with exemptions only for key wartime industries. There will be no conscription yet, but he has helped lay the infrastructure long before it happens. Kitchener was quoted in December predicting the war would last “at least three years,” and he is acutely aware of a post-holiday drop off in volunteers. He calls for another round of mass enlistments to forestall the need for such measures.

Referencing Napoleon, Kitchener mentions “the three necessaries in war — money, money, money,” substituting men, material, and money. He praises the Munitions Department for ramping up ammunition production, but gives no specific numbers. Progress is slower than he would like, or than British artillery crews would like, with uneven quality control. Kitchener announces that South African troops will serve on the Western Front soon, and calls for employers to release men for service. The bleeding has only begun.

On his way to the venue, Lord Kitchener is cheered and applauded by a crowd that fills the streets. They are not hypnotized by his mustache; they are victims of a terrible optimism abounding in England. These are dark days, for the enthusiasm of the mob will give way to the great disasters and disappointments of 1915, and the leadership will have none but themselves to blame.

Even though almost two and a half million men will take up arms before the end of the year, January of 1916 will see parliament pass the Military Service Act, conscripting single men of military age.

Then the real bleeding can begin.