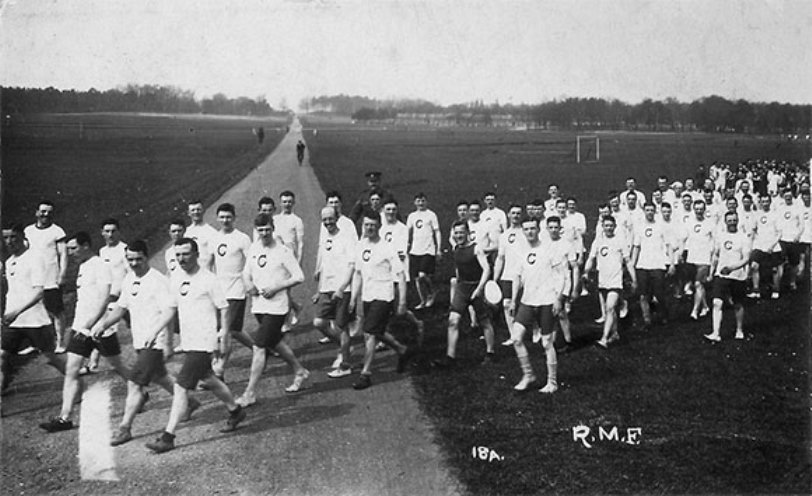 Take a good, long look at the picture above, and then say goodbye to them all. By the end of the day, every last man of C Company, 2nd Royal Munster Fusiliers, will be dead or captured in a bid to buy space and time for the British retreat from Mons, where a proud, first-day defensive stand would have turned into a second-day disaster were it not for a French general’s decision to retreat.

Yesterday at Le Cateaux, the job of rear guard fell to their compatriots in the Connaught Rangers — the same unit whose marching song, “It’s a Long Way to Tipperary,” impressed correspondent George Curnock of the Daily Mail two weeks ago. Their song will be sung by the entire British nation for the rest of the war, for every man of them was killed or taken prisoner yesterday.

Just like their comrades, today the Fusiliers do not receive orders to withdraw in time, and bear the full impact of General Alexander von Kluck’s 1st Army. Within the gilded frame of British memory, today’s action is among the noblest moments of the war instead of a disaster brought on by poor communication. But in truth, these sacrifices do little to stop the German steamroller. 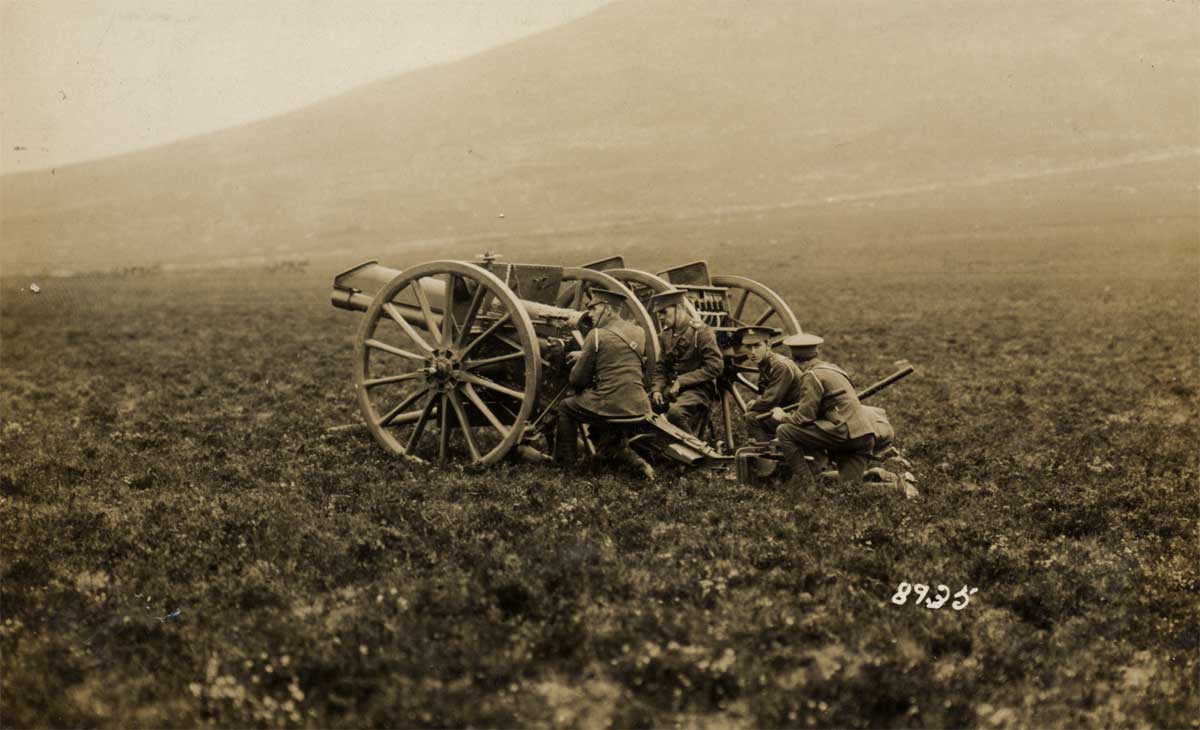 A British crew on a BLC 15 pounder field gun. Built to fire light shells in open fields, these already-modified guns were obsolete in 1914, but some were elevated for use as antiaircraft weapons

The British Expeditionary Force (BEF) is too small to make a significant difference to the Schlieffen timetable; Germany has sent 80% of its available strength to the Western Front in hopes of knocking France out of the war quickly, so whereas Sir John French has just four divisions at the moment, the Kaiser is currently fielding forty. And although the British Lee Enfield is a better combat rifle than the Mauser, the Tommies haven’t brought enough machine guns or modern artillery to stop the ‘grey wave.’ Nor have Britain’s French ally, or the brave defenders of Belgium, managed to hold back the onslaught in any appreciable way with their armaments.

A clue to where the Germans go off their plan lies in the number of stragglers they capture along the roads today. Hundreds of BEF soldiers are being taken prisoner by the advancing Germans because they have simply given up and sat down, willing to be left behind by their units. Their packs are too heavy, and ‘resupply points’ tend to weigh men down again rather than speed them along; newly-issued boots have blistered their feet on the long marches from the coast and back here again.

Meanwhile, another clue can be found in the wake of the ‘grey wave:’ countless German stragglers who are no longer able to keep up a marching pace of as much as twenty-five miles a day, whatever General Schlieffen’s timetable says. And yet another clue is the abundance of limping horses who need new shoes — without a blacksmith in sight.

Pluck and perseverance are important qualities in a soldier, which is why they are instilled with sweat and pain from the first moment by superiors who suppress their thousand minor gripes and discomforts with military discipline. But men and animals are not machines, and morale is not the same thing as motion. Human bodies and minds have limitations that the generals of all these armies simply have not understood, and therefore have not considered in their prewar planning. 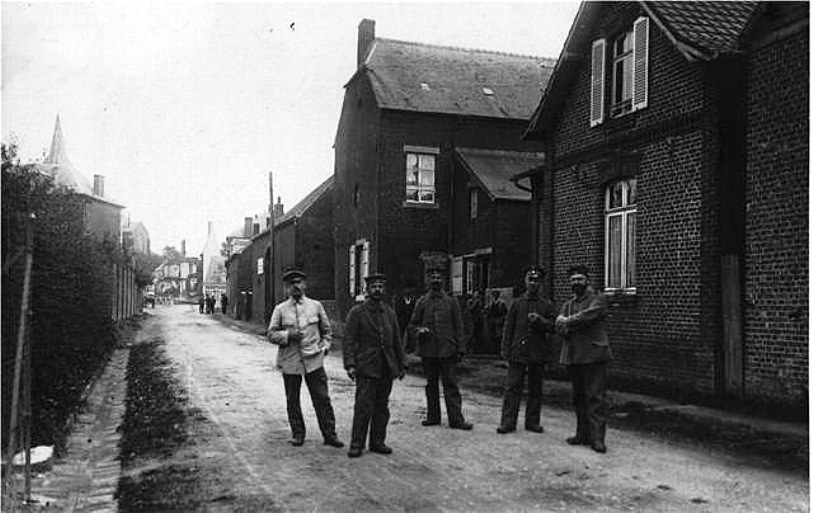 German soldiers relaxing in Etreaux some time after the battle in 1914; by today, they had been marching or fighting for 24 days in a row without rest or recuperation

Desperate to project meaning on a senseless conflict, the allies will later convince themselves that they are responsible for the Kaiser’s troops being a half-day behind schedule tonight. But realistically, a hot August, heavy packs, slowed carts, and blistered feet have much more to do with the exhaustion now leading the invaders astray from von Schlieffen’s famous plan. It will take many more decades for military theorists to invent a term, ‘battlefield friction,’ to cover the thousand and one things other than combat that can slow down a unit in the field; all of them are affecting the German advance.

For instance, frequent rains keep leaving men drenched in wet wool, and in fact a torrential downpour arrives right in the middle of this battle. It turns the ground to muck; the defenders’ trenches fill with water, while attackers find it hard to advance. Upon encountering the fusiliers, General Kluck’s skirmishers seek out their flanks; even in the rain, the attackers use fire and maneuver to flush the Irishmen out of their defensive position and into an orchard. With their Maxim gun ammunition gone, the defenders smash the weapon and fight off attacks with their rifles, counting every shot. Like every battle, there are lulls, sometimes for hours, as decisions are made and units moved. Finally, late in the afternoon the inventive Germans have rounded up a herd of cattle to cover their final assault.

But like the Hornet’s Nest at Shiloh in the American Civil War, these defenders’ impression of their courageous stand is far too grand, for they can no longer cover the road from their defensive position in the orchard. Its trees provide perfect lanes of fire, but not a clear view of the avenue they were supposed to secure. Though their captors will congratulate them on their courage in the fourteen hour engagement, the 1st Army is mostly held up by the blessed relief of finding an excuse to stop marching in the rain. As soon as the road has been cleared of opposition, the main body of General Kluck’s army reluctantly gets up and keeps moving.

They are twelve miles behind the main body of the BEF’s II Corps. Yesterday, liaison officer Colonel Charles Huguet told General Joseph Joffre: “Battle lost by the British army, which seems to have lost all cohesion.” Today, his dispatch reads: “Conditions are such that for the moment the British army no longer exists. It will not be in a condition to take the field again until it has been thoroughly rested and reconstituted.”