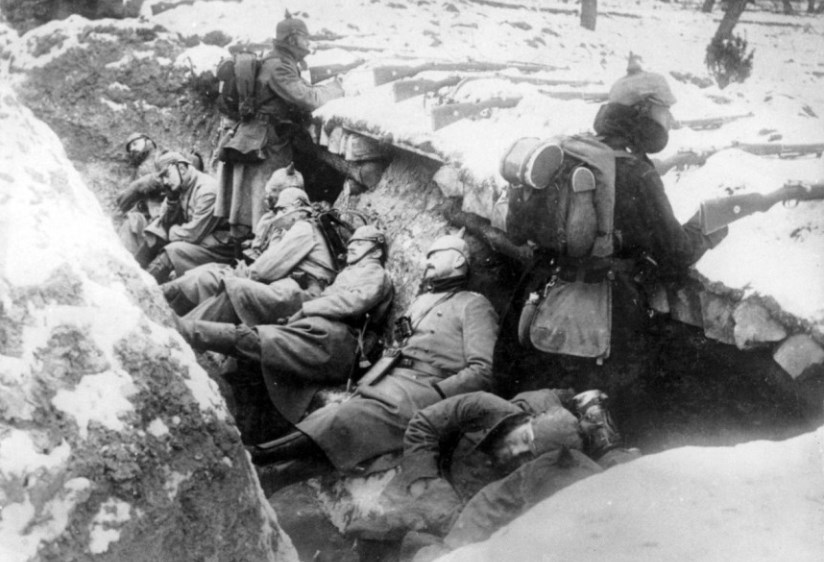 One month ago, the Battle of Łódź ended as a strategic victory for General August von Mackensen when Germans occupied Poland’s textile center, a city of 380,000 Russian citizens. The French ambassador to Petrograd notes in the December 9th entry of his memoir that the loss of Łódź seemed to drain away public enthusiasm for the war:

The uncertainty shrouding the military operations in Poland, the only too justifiable presentiments of enormous losses suffered by the Russian armies, and last but not least the evacuation of Lodz have led to a profound melancholy among the public. Everyone I meet is downhearted. The signs of depression are to be seen not merely in drawing-rooms and clubs, but in public offices, shops and in the streets as well.

[…] (A source), looking very uncomfortable, as he was treading on dangerous ground:

“At the moment the Emperor is very angry with Germany; but he’ll soon realize that he’s leading Russia to destruction. … He’ll be made to realize it… . I can hear that low hound, Rasputin, telling him: ‘ Well, how much longer are you going to spill the blood of your people? Don’t you see that God is abandoning you? On that day peace will be at hand, Monsieur l’Ambassadeur.“

Despite his tireless advocacy of the war effort and his strenuous attempts to rally his interlocutors, Ambassador Paléologue knows the truth about Russia’s military situation. He is aware that the Tsar’s military reforms have been incomplete and hollowed out by corruption, incompetence, and lack of planning. Like one of Potemkin’s infamous fake villages, behind their white-painted facade the world’s largest land army is deeply afflicted by rot and privation. Paléologue has been briefed on the shortages of arms and ammunition at the front, and personally raised the alarm over those matters at court.

Russian reinforcements had already been arriving at the Polish front without weapons for weeks when the Germans crossed the Bzura River into Sochaczew on the 15th, cutting off the rail link between Łódź and Warsaw on December 15th. At that point, Field Marshall Paul von Hindenburg was within thirty miles of Warsaw and vowing to his troops that they would eat Christmas dinner in the old capital of Congress Poland. German troops entered the town of Lowicz three days ago, but their latest offensive has bogged down in the mud of an unexpected thaw as they tried to cross the Pilica, Rawka, and Bzura rivers. 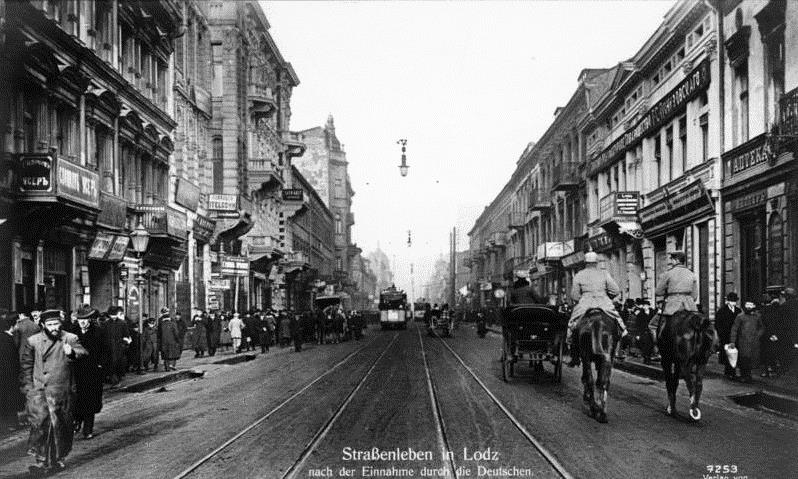 A photo of German-occupied Lodz in December 1914. The Russian public mood turned pessimistic with the loss of the city

The German 9th Army continues their attack today despite heavy losses. Crossing at Sochaczew and Skierniewice, they earn a blood-soaked foothold on the far bank of the Bzura over the next two days. The winding valley is steep on the attacking side and swampy on the defending side; the main Russian positions between the villages of Mogiły and Zakrzew are almost two miles south of the riverbank, for that ground is just too low and wet to dig trenches.

The heavy snows that characterized fighting in November then melted in December, making charges impossible in such terrain. But now a thin crust of frost covers the ground, and it is easier to move large formations of men — especially at night. The improved footing is one major reason why December campaign accounts on the Warsaw front front refer to nighttime attacks. Another reason for all the night-fighting is the short daylight, as the Winter Solstice is of course the longest night of the year. 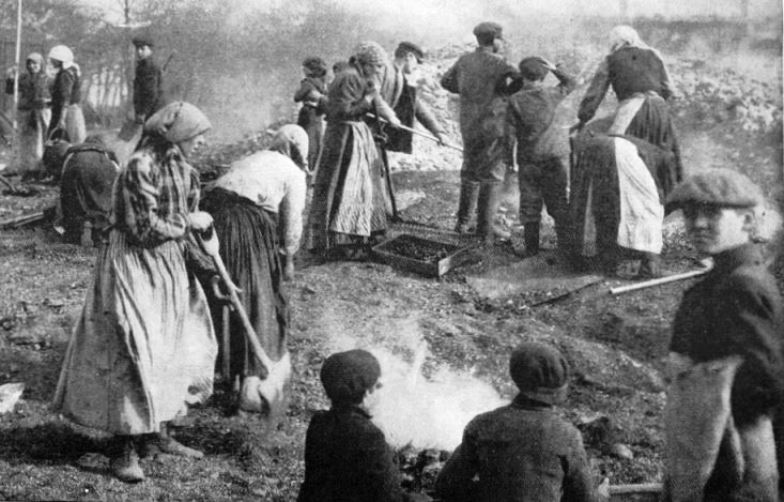 Polish refugees living in the open. Winter is a particularly harsh time to be homeless in either war or peace

The conditions make combat miserable. Germans wade through the icy river to attack the other side. Wounded men succumb more quickly in the cold; manual tasks become more difficult in heavy gloves. The fighting has displaced tens of thousands of Poles, adding another stream of refugees to the river of humanity that is trying to escape the war. Russian soldiers scavenge abandoned houses for vodka. Food prices skyrocket in Warsaw.

In the chaos, General Nikolai Ruzsky detects socialist propaganda among the reservists now arriving from urban hotbeds of the communist international, and invokes punitive measures to stamp out the flames of revolution in the ranks. Forced by the shortages to give ground in December, Ruzsky forms his new defensive line here.

The fighting peaks on Christmas Eve, when a furious daylong assault fails to break through and fulfill Hindenburg’s promise. Attacks continue into January as the real Winter weather arrives to freeze the ground solid and cover it in snow. Trench fighting first appeared along the East Prussian frontier in September, but with German attacks now taking place in Silesia the Eastern Front assumes a static shape at the end of 1914, becoming an almost-continuous backwards S-curve of improvised fortifications. The war has taken on the character of the largest protracted siege the world has ever seen. 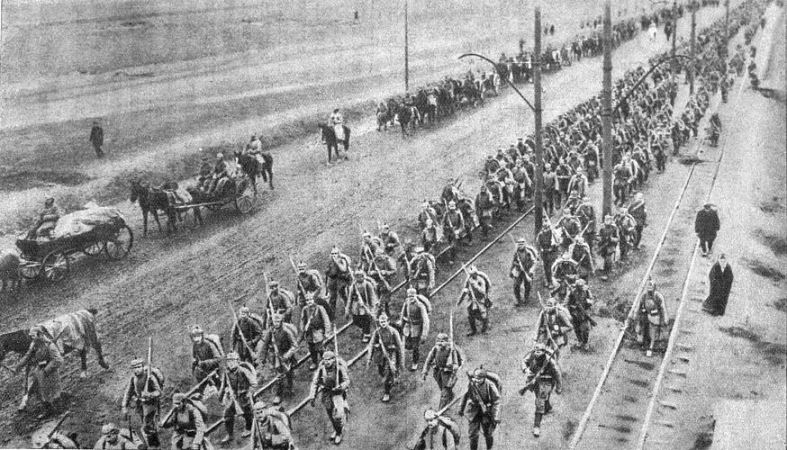 German troops advancing on Warsaw. Note how the rail tracks and road shoulder are being used because the track is too muddy