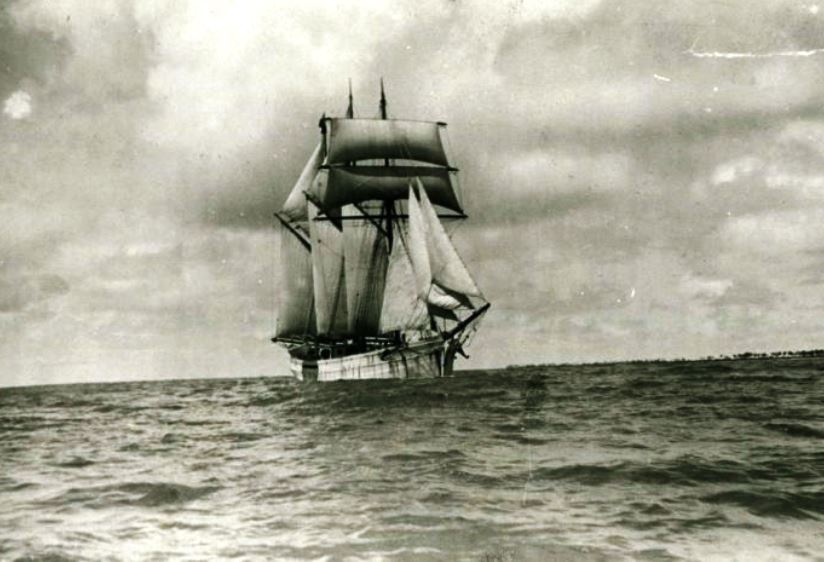 After Queen Victoria granted the Cocos Islands to the family of Scottish sea captain John Clunies-Ross in perpetuity in 1886, they were soon covered with coconut plantations. The schooner Ayesha (see above) was built to carry their copra, or dried coconut meat, to the Indonesian mainland, but she has fallen into disuse ever since regular steamship service was established. When the German cruiser Emden met her end on November 9th, Kapitainlieutnant Helmuth Karl von Mücke’s shore party of three officers and fifty sailors was left behind on Direction Island. Rather than wait for the Australian armored cruiser Sydney to return and take him captive, Mücke decided to take the three-masted ship against the advice of Direction Island’s British wireless and cable staff, who tried to warn him that she was hardly seaworthy.

Built for a crew of five men and one captain, conditions on the boat have been cramped and difficult for such a large compliment. Near-daily seasonal storms provide drinking and washing water for the crew, but also threaten the patched sails and worn rigging, forcing Mücke to haul in his sails and lose speed during bad weather. The wood of Ayesha‘s bottom is rotten and spongy, and her spars keep threatening to snap. So it is with great relief that he sights the Choising, a German freighter that has slipped out of a neutral port to rendezvous with them in the Indian Ocean, at about two in the afternoon today. Unfortunately, the seas are far too heavy to transfer safely to the other ship. Mücke and his crew will have to wait another two nerve-wracking days before they can leave the Ayesha. 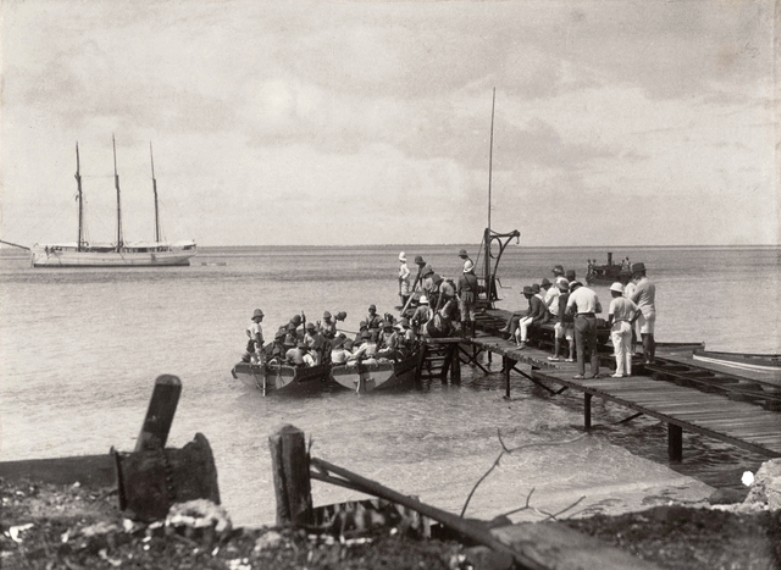 Mücke and his shore party preparing to leave Direction Island. The Emden‘s steam launch, seen on the right in the background, was used to tow the schooner out through unfamiliar coral reefs as sunset brought complete darkness to make things interesting

When the Ayesha arrived at the Dutch port of Padang on November 29th, Mücke had already ordered the crew to cut four gunports for their machine guns. Upon encountering the Dutch destroyer Lynx and meeting her captain, Mücke refused to accept his ship’s internment, pronouncing the Ayesha a warship in the Kaiser’s navy. “I hope you and I will not get into a fight when I leave,” Mücke told his interlocutor. As the kapitainleutnant recalls in his published memoir of the voyage, this was merely his first display of chutzpah while in port.

Just before we reached the entrance to the harbor, a small steam tug came out to meet us. It was bringing the harbor master, who was coming to show us where to drop anchor. He indicated a place quite far out. It was my intention, however, to get as close as possible to the steamships lying in the harbor, for even now I could distinguish the German and Austrian flags flying on some of them. I therefore told the harbor master that I would rather not anchor so far out, but would like to run farther into the harbor. It was not a sufficiently sheltered place for my ship, I explained, and furthermore, that it required a great length of chain to anchor in water of that depth. That our chains were in fact quite long enough to reach to the bottom of water six times as deep, I did not feel obliged to tell him. By and by his objections were overcome by argument in plain German. But, as we got farther in, he demanded very insistently that we anchor at once. Now it chanced that by a mishap the two topsails, the very ones by which a ship makes the most headway, absolutely refused to come down. Again and again the sheets and halyards hitched, so that, as was my original intention, we had come close up to the steamers before we found it possible to anchor.

Having been cut off from real news of home since August, Mücke’s crew eagerly accepted newspapers, cigars, and other gifts from the German merchant crews. The harbor-master, a Belgian citizen under orders to obtain their internment in any way possible, refused to let them take on clothing, soap, or toothbrushes on the grounds that these items would increase their “war strength;” he was not persuaded to relent by the ragged remains of their uniforms or the smell of their breath. Implacable, Mücke refused to give in.

This morning I was informed by the official representative of the Royal Dutch government in the presence of the German consul on board SMS Ayesha that the Royal Dutch government is determined to designate the Ayesha a prize of war. I am submitting a protest against this designation and demand that the ship be treated as a warship. All conditions of a warship are met by her. There are only members of the Imperial German Navy on board; the crew is therefore militarily organized.

[…] The question of how I came into possession of the ship and by what right I am its commanding officer are matters of German domestic concern, and in explaining this turn of events I am responsible only to my superior officer.

After loading on food, including ten live pigs, and passing a note to the consul about his intentions to wait off Padang Island for a rendezvous, Mücke weighed anchor at 8 PM on the 30th and headed back out to sea. He has spent the last two weeks dodging allied ships and waiting for a steamer to show up.

During a squall late on the second day of their rendezvous, her foresail and staysail finally tear from their ropes, taking the fore staysail with them and leaving the schooner without any forward canvas. Nevertheless, Ayesha and Choising are finally able to connect in the calm waters on the leeward side of Padang Island in the wee hours of the morning of the third day. After transferring everything of value to the more seaworthy vessel, the crew drills holes in her bottom and then watches her slip under the waves.

It appeared as though the little ship were loathe to part from us, for, although our steamer was moving on, and no hawser was holding the Ayesha to us, she kept alongside the Choising for some time. And then, at last, as though she had found her own strength insufficient to keep up with us, the Ayesha caught on to our ship, just behind the gangway ladder, carrying a part of it with her.

[…] Gradually, and very slowly, she sank lower and lower in the water. Soon it washed her upper deck. Then suddenly a shudder passed over the whole ship; she seemed to draw a long breath; the bow rose out of the water for a last time, only to plunge into it again the more deeply. The iron ballast rolled forward; standing on end, her rudder up, her masts flat on the water, the Ayesha shot like a stone into the deep, never to be seen again. Three cheers for her rang out above her ocean grave.

The remarkable journey of the Emden‘s shore party is not over yet. Having already sailed more than 1,700 miles, Mücke must still cross the Indian Ocean to Yemen — and then brave the burning Arabian desert. It is to be one of the greatest adventures of the Great War. 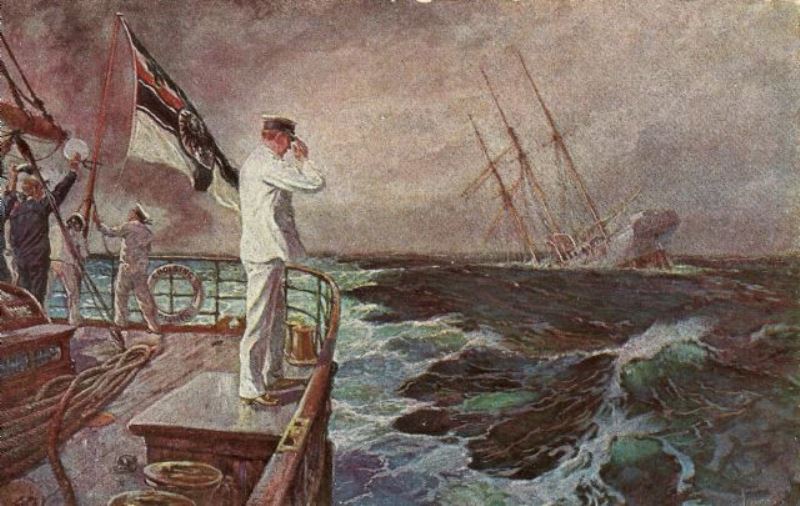 Share on FacebookShare on TwitterShare on Google+
Cruiser war, Germany, neutrality
06 - December of the Damned, 1914 - War Breaks Out, War at Sea
Posted on December 14, 2014