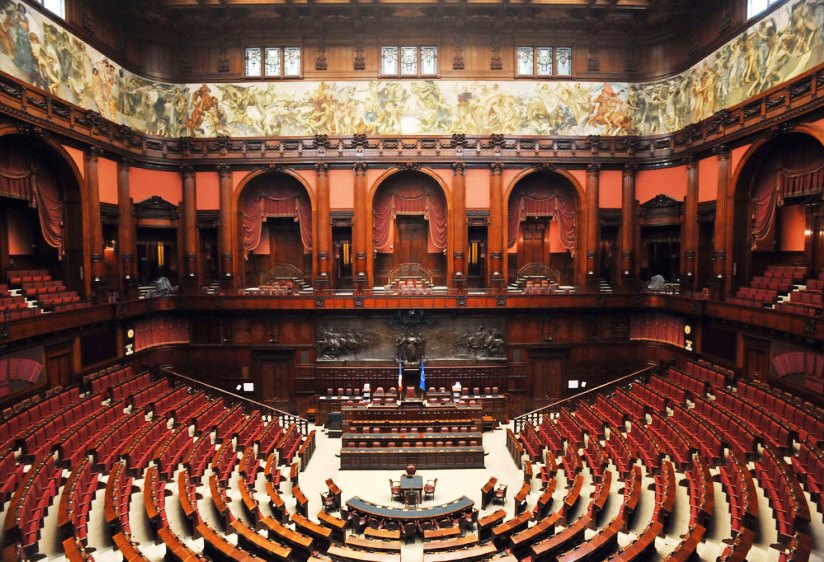 Since the reunification of Italy (Risorgimento) began more than a century ago, the dream of uniting Europe’s Italian-speakers into a single kingdom has morphed into an imperial fantasy. No longer satisfied running a ‘minor power,’ the Italian government of Antonio Salandra sees the new war in Europe as more than an opportunity to ‘redeem’ the Austrian-controlled cities of Trieste and Trento. The Italian right longs to control Albania, dominate the Adriatic Sea, incorporate the Dalmatian coastline, and reach ‘Great Power’ status by enlarging its African territories — all in order to reenact the distant history of the Roman empire.

These ambitions are not unusual for the era. In 1914, the German empire is already fighting for ‘a place in the sun’ on the supposition that its colonies in Africa and the Pacific are not enough. France, Britain, and Japan are gobbling up those dominions as they fall. Why shouldn’t Italy, which has already expanded at the expense of the Ottoman Empire using modern weapons in 1911, also chase after its own place in the sun?

Perhaps it was inevitable that, when the Italian Kingdom relocated its capitol to Rome in 1871 and the courtyard at the Palazzo Montecitorio was converted into the glorious Chamber of Deputies (see above), the unification and independence of the new nation would eventually transform into ambitions of Mediterranean dominance. For Antonio Salandra, the right wing authoritarian Prime Minister who speaks before the new session of parliament today in that room, the step from mere nationhood to empire is as natural as breathing. 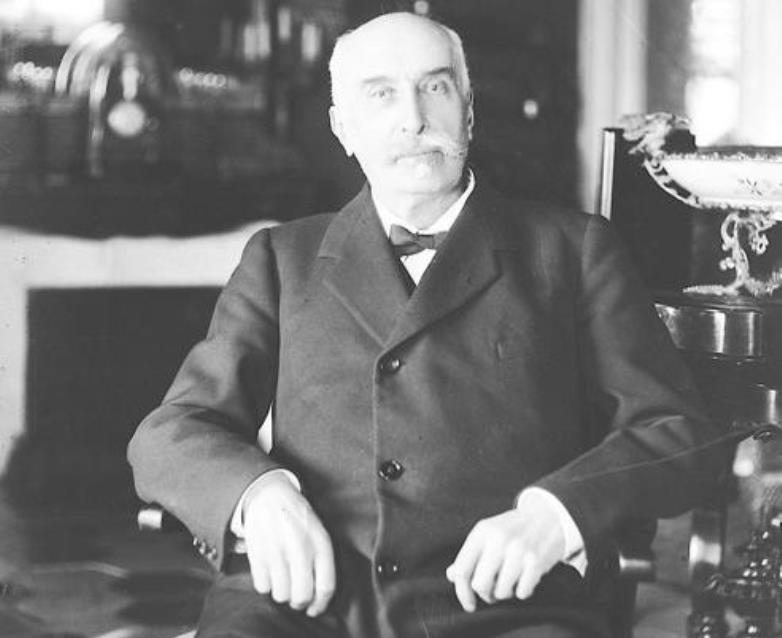 Giovanni Giolitti, the longest-serving Italian head of state before Benito Mussolini, was a liberal whose reform legislation had already improved the lives and circumstances of millions of Italians before the outbreak of the Great War

Always a gifted writer, Salandra’s speech today is one of his most cleverly-crafted, for his cabinet needs room to precisely thread a diplomatic and miltary needle. At once affirming his government’s neutrality in the ongoing horrors of the Great War, to the pro-war factions he also signals his willingness to enter the war later, at a ‘decisive moment.’

This reflects Salandra’s actual policy, which has not yet settled finally on war. Having already secured a secret agreement with Romania to improve his country’s military position, he intends to invoke Article VII of his nation’s public treaty with Austria, giving the Kaiser Franz Joseph an opportunity to peaceably surrender the desired Alpine provinces. Meanwhile, Salandra will open negotiations with the allies in London to secure an even better deal in the probable event that Joseph proves unwilling to suffer such a blow to the prestige of his dynasty. His grip on this process has become all the tighter with the natural death of his Foreign Minister Antonio San Giuliano, whose portfolio Salandra has temporarily claimed for himself before handing it off to Sidney Sonnino, an agrarian conservative flunky.

Italy’s political environment is already changing in ways that benefit Salandra’s machinations. The Socialist Party is riven by dissent, with the pacifist internationalists having just purged the pro-war faction, led by Benito Mussolini, from their ranks. Seeing Austria as a reactionary regime that must be destroyed, their priorities coincide with the aims of Republicans, Freemasons, and Nationalists to complete the Risorgimento. A similar split has appeared in political Catholicism.

Aside from a weakened Socialist Party, Salandra’s only remaining obstacle is the Liberal Party, led by Giovanni Giolitti, and his allies among Italy’s bankers and industrialists who owe money to Germans. In the past, Giolitti has mastered the fine art of transformismo, building centrist coalitions that leave extremists of left and right marginalized, but wartime is accompanied by deep polarization. While his opposition to the war will eventually restore him to the Prime Minister’s office in 1920, Giolitti’s final term in that office gives way to Mussolini’s fascism; the center cannot hold. 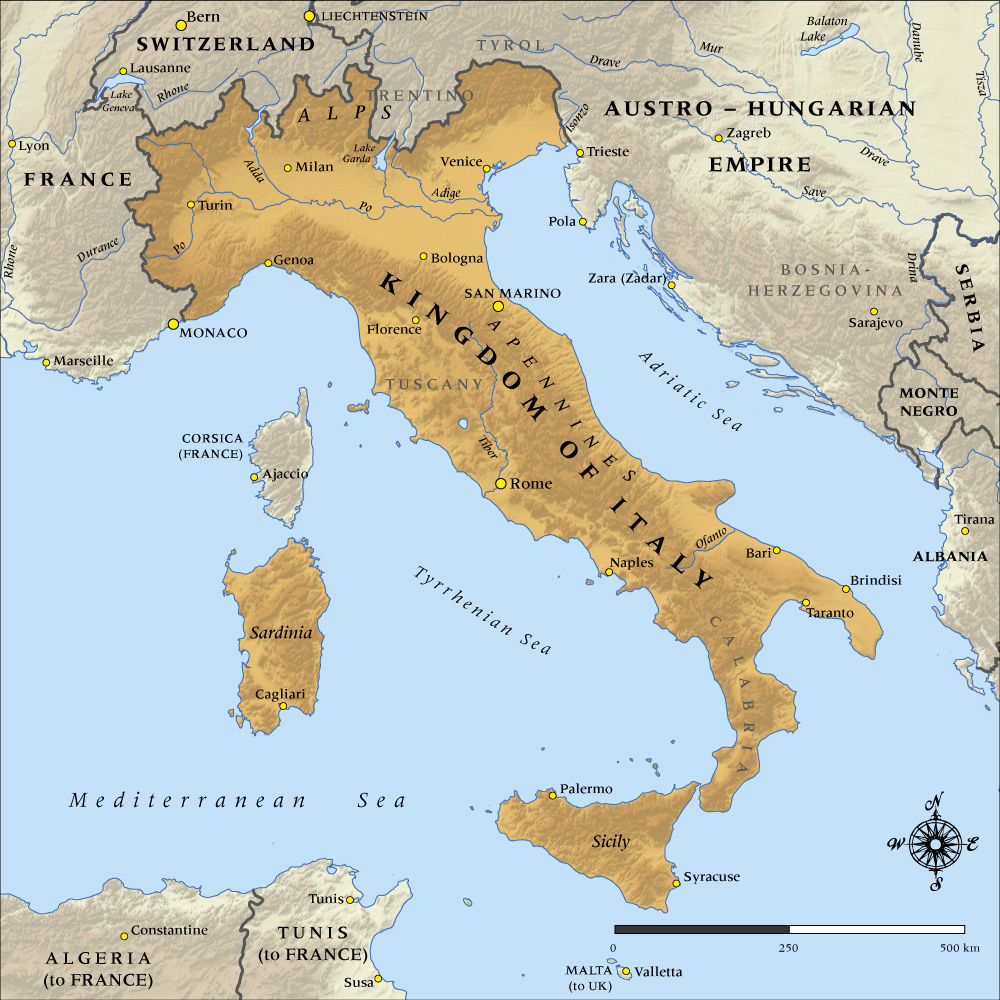 The Salandra government would try to win the Isonzo River valley, Trentino, and the Tyrolean heights through diplomatic means before resorting to a secret new treaty with the allies of the Triple Entente, turning on their former Austrian and German allies

Public opinion was against the war, and approved of neutrality, when Italy’s involvement might have advanced the Balkan ambitions of their Austrian rivals. By May, when Italy finally does go to war, popular sentiment supports the turn against former allies. In the meantime, Salandra has had eight months to rearm and reequip the Italian Army, which is woefully unprepared for any war at the moment, much less a total war of attrition. Most of the country’s troops are still stationed in Libya, while the munitions expended in the 1911 war with Turkey have still not been replaced. Salandra’s speech today is not simply a bid for rhetorical space in which to pursue diplomatic approaches to his country’s ambitions; it is a play for time to make a military alternative possible. 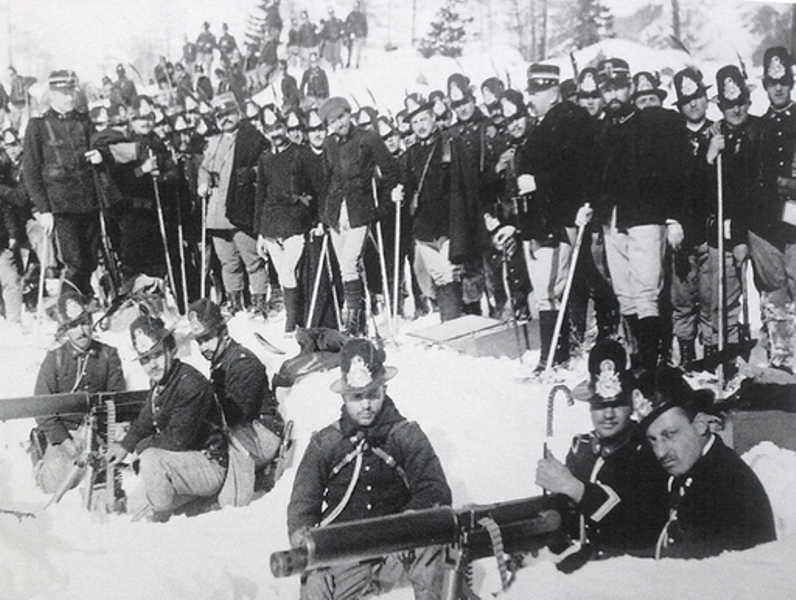 Elite Italian Alpinis in their distinctive prewar uniforms. The Italian Army had never been replenished to its pre-1911 war levels and needed to be modernized at great cost and effort before the country entered the Great War