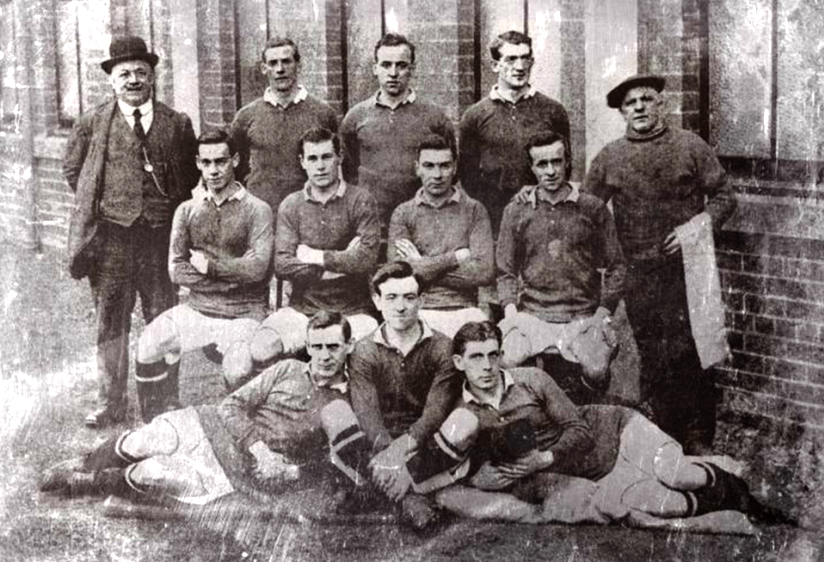 Today, sixteen players from the Heart of Midlothian football club volunteer for enlistment in the British Army — and five are disqualified for medical reasons. This high rejection rate is actually lower than the general population, as nearly half of all the British men lining up to fight in some centers are not accepted, while nearly three quarters of Irishmen are also refused. Despite all its porcelain splendor, the Edwardian age has not eradicated the endemic malnutrition and diseases that afflict the British working class.

Football is the rowdy game of those factory towns and cities where Lord Kitchener wants to raise a whole new army for the Western Front. Unlike cricket, an upper-class sport whose national and international leagues closed down in August for the duration of the war, the Football League decided to complete its 1914-1915 season, earning some criticism for a perceived lack of patriotic fervor. But recruiting drives at matches, team-specific recruiting posters, and other innovative football-based efforts are credited with raising 100,000 recruits by April 24, when Sheffield United beats Chelsea 3-0 in the ‘Khaki Final,’ so-called for the abundance of military uniforms in the stadium seats.

The eleven Hearts of Midlothian who enlist today hold a press conference, pose for a photograph (see above), then try to maintain their demanding team schedule during their induction and training, with results that are all-too-foreseeable. Having begun the season with a stellar run of victories and talk of a championship, they will lose momentum and end the season out of contention. Only one of the men enlisting today will be left unharmed by the war. 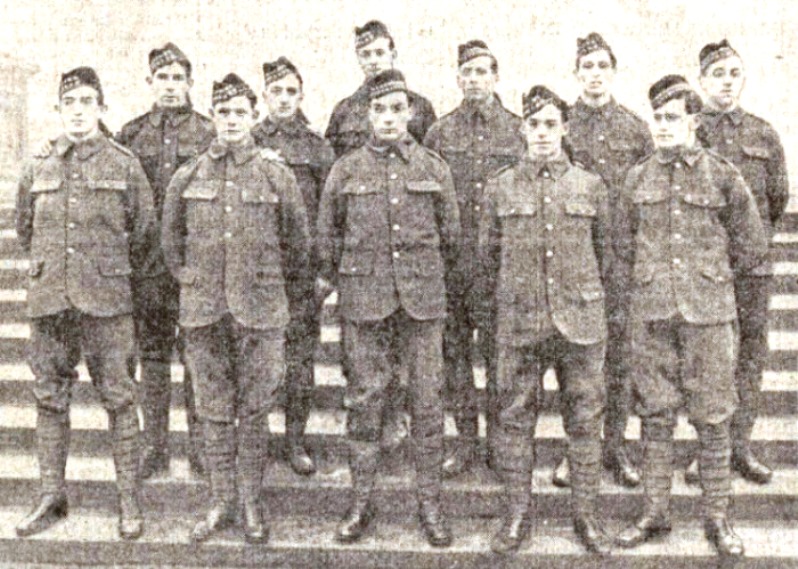 Sports are an integral part of British manhood in 1914, so of course recruiting propaganda makes heavy use of sports themes. Reflecting the values of ‘fair play’ at the heart of sporting social values, British sailors complain that German submariners are “not playing the game” when they fire torpedoes while submersed. The London Evening News denounces the Football League’s decision to play as an affront to the memory of the dead: “the young men who play football and those who look on have better work to do. They are summoned to leave their sport, and play their part in a greater game. That game is War, for life and death.” Football is a constant source of exercise and recreation behind the lines in every theater of war, even in German prisoner of war camps.

It is safe to say that Britain’s all-volunteer army has prepared for war on a football pitch, and will fight the war accordingly. During the Battle of the Somme in 1916, Pat Crossan will write: “I think that instead of fighting we should take the Fritzes on at football. I am certain we would do them.” After being wounded and surviving a three day craw through no man’s land, his lungs are later injured in a gas attack, and despite a valiant effort he is unable to resume his football career after the war. 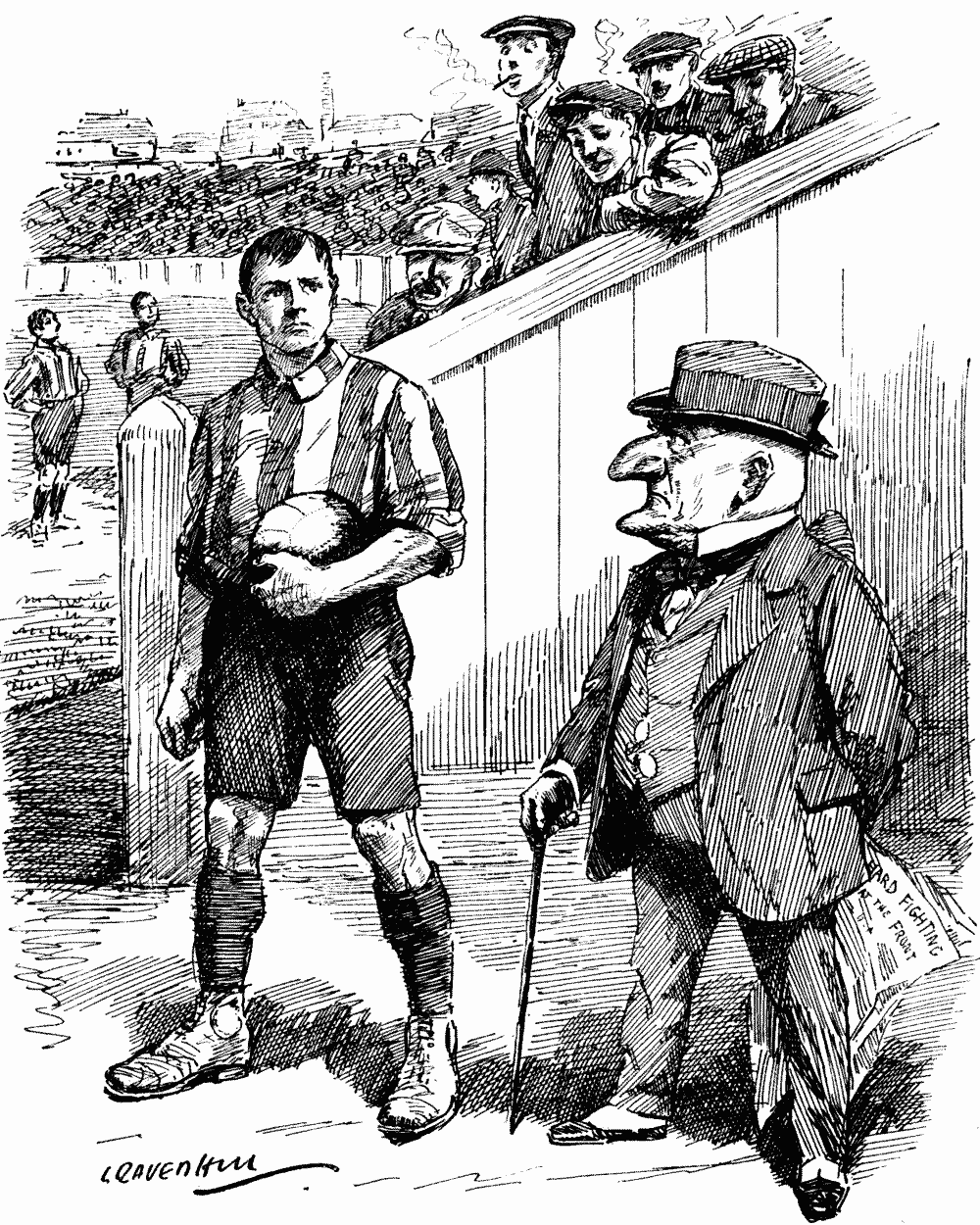 Mr. Punch (to Professional Association Player). “NO DOUBT YOU CAN MAKE MONEY IN THIS FIELD, MY FRIEND, BUT THERE’S ONLY ONE FIELD TO-DAY WHERE YOU CAN GET HONOUR.”

Enlistment has been brisk, but fears of a slowdown have led to renewed public outcry. Edinburgh politician Sir George McCrae has challenged his city for a battalion of volunteers to be raised in one week. Like other clubs, the Hearts have been the target of a pressure campaign organized by English social reformer and temperance advocate Frederick Charrington, who sees the war as an opportunity to sober and straighten British manhood.

Players receive letters urging them to enlist; some of them include the famous Punch cartoon above, clipped and folded into the envelope. Eleven days ago, the Evening News printed a letter from ‘Soldier’s Daughter,’ who opined “that while Hearts continue to play football, enabled thus to pursue their peaceful play by the sacrifice of the lives of thousands of their countrymen, they might adopt, temporarily, a nom de plume, say ‘The White Feathers of Midlothian.'”

Club players have already enlisted during games when the halftime call for volunteers has been disappointing; the team has been drilling at the direction of military veteran Allen Ness in expectation of being called on to enlist. Like most men who join before 1917, when conscription becomes necessary to overcome the rate of attrition on the Western Front, the Hearts signing up today are not doing it suddenly, but only after lengthy deliberation and a great deal of social pressure. Some men join because their industries are shutting down for war, and with today’s events the Football League’s final season has become another transitional state on the way to total war. 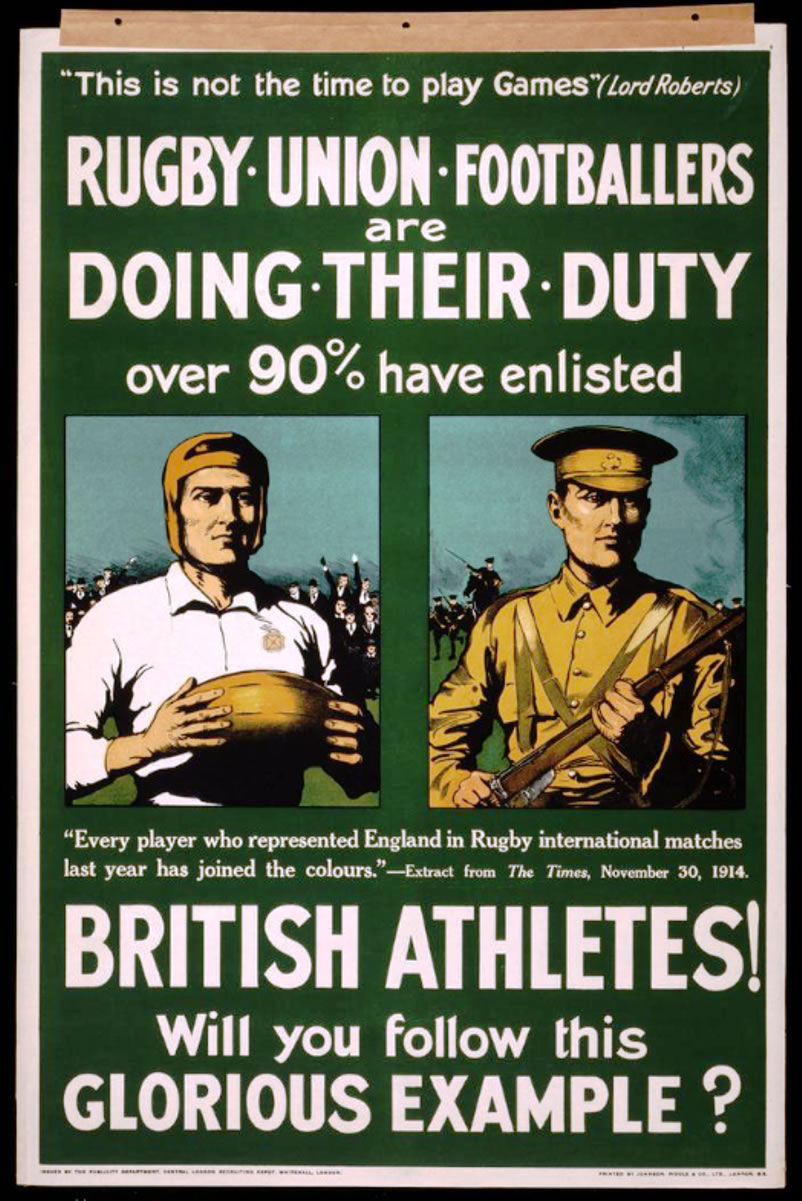 A recruiting poster with a clear sports theme