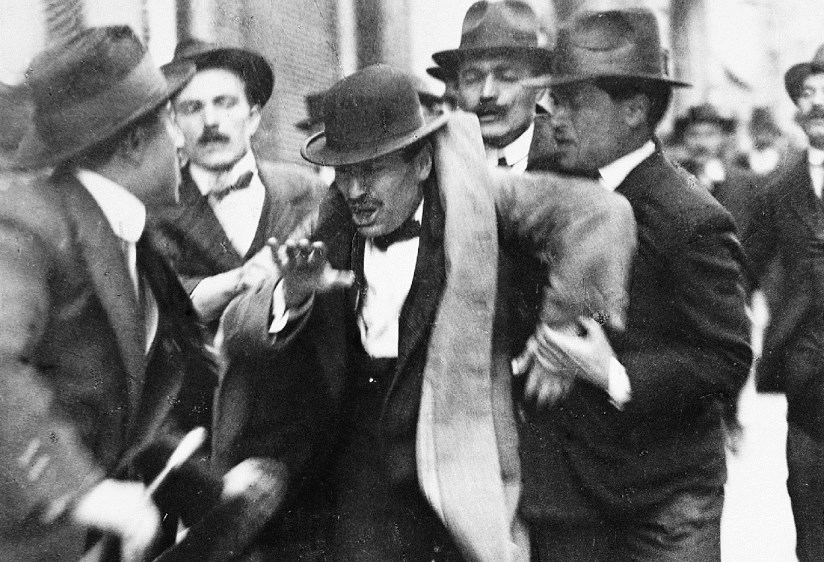 The solidarity of the international socialist movement has been torn apart by the war, and no one has done more than Mussolini to break up the Italian Socialist Party (ISP) since the fighting began. With financial support from his mistress, Mussolini has already founded a new pro-war newspaper, Il Popolo d’Italia (The Italian People) and stirred turmoil within the ranks.

Today is Benito Mussolini’s last day as a member of the Party. Determined to resist the war, the reigning internationalist faction decides to expel Mussolini in a special meeting to be held in Milan tomorrow. Learning of these plans today, he attends the meeting in person to deliver a short, but defiant speech: “Do not think that in taking away my membership card you will be taking away my faith in the cause, or that you will prevent my still working for socialism and revolution.” Yet in just a matter of weeks, Mussolini will openly criticize the Italian Socialist Party for associating with “obsolete” Marxism.

Rejecting the left, Mussolini is beginning his long, hard turn to the right. Along the way, he will drag Italy into dictatorship and war — and personify a new word that will come to be synonymous with militarized, totalitarian regimes built on an establishment of corporate power: fascist. 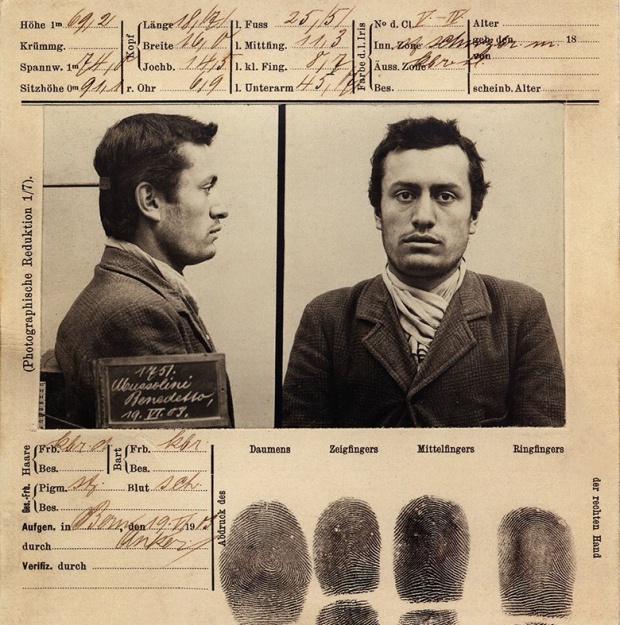 Benito Mussolini’s mug shot from his 1903 arrest on charges of agitating for civil disorder in Bern, Switzlerland

Socialists have no monopoly on revolution against the state in 1914, and Mussolini has been influenced by many rival philosophical movements, including Friedrich Nietzche’s superman and the séance-holding syndicalism of Georges Sorel. He moved to Switzerland 1902, but failed at teaching, bricklaying, working in a chocolate factory, and anarcho-sydicalist activism before being arrested and deported in 1903. He became a communist that year, but he was already ingesting the anti-individualist, anti-liberal, anti-rationalist rejection of secular and modernist values that was common to reactionary movements which, by the end of the 19th Century, had rejected the Marxian dialectic of history as a class struggle.

Turning on a dime, in December Mussolini takes up the leadership of the Fasci Autonomi d’Azione rivoluzionaria (Autonomous Revolutionary Fascio for Action), an organization founded in October by lawyer, activist, and journalist Angelo Oliviero Olivetti, who knew Mussolini in Switzerland before being expelled himself in 1912. Mussolini will merge this organization with the Fasci d’Azione Internazionalista, a pro-war group that sees Austria and Germany as reactionary states, to form the Fasci d’Azione Rivoluzionaria on December 11th.

At a meeting held in January, he will inject a very un-Marxist nationalism into the organization, explicitly tie its ambitions and motifs directly to the legacy of the Roman empire, and reject international proletarian revolution as a failed experiment. By the time Italy enters the war in May, Mussolini has already called for the Italian state to wage war against Austria — and even the Slavs of the Balkans if necessary — in order to realize the imperial ambitions of the Italian political right.

Next April, his public demonstrations advocating war lead to violent clashes (see photo at top). Always a thug, after this experience Mussolini is more convinced than ever that violence is a necessary part of his revolutionary ‘reforms.’ In 1919, he is organizing Squadrismos (squads) of war veterans in black shirts and fez hats to ‘safeguard’ his revolution by imposing it on those who dare resist. Party paramilitaries like Mussolini’s ‘blackshirts’ will become a primary element of all fascist movements; in 1922 it is Adolf Hitler who draws inspiration from Il Duce, not the other way around. 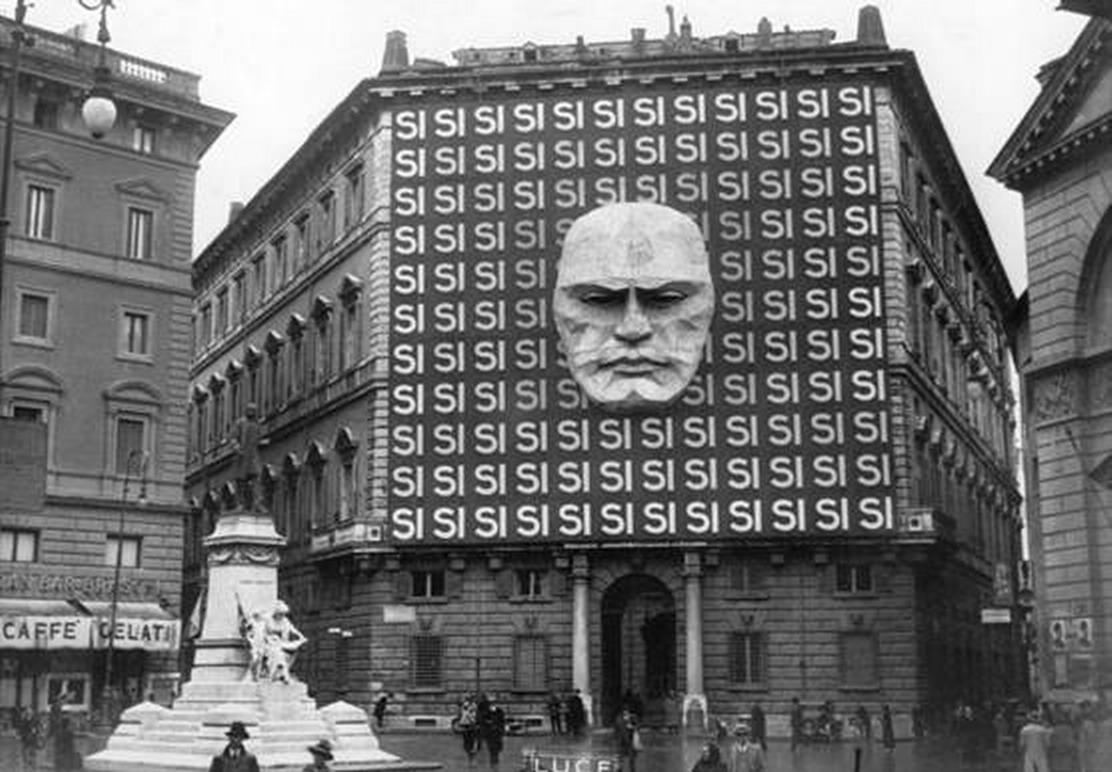 The headquarters of Mussolini’s Fascist Party, which helped inspire the INGSOC of George Orwell’s 1984

Most of the men who join Mussolini’s new movement are not former leftists; in fact, very few have ever been politically active before, and their lack of previous exposure to socialist ideology makes it much easier for him to replace Marx in the official canon. Mussolini substitutes Giuseppe Mazzini, a contemporary rival to Marx whom the better-known father of modern communism once described as an “everlasting old ass.” Mazzini thus becomes the founding philosopher for a strange, new kind of ‘socialism’ marked by a reactionary rejection of the socialist international.

Once an anti-Catholic radical whose father denounced priests as “black germs,” Mussolini will become ardently Catholic in his family life and public policy. Formerly in favor of labor unions, he later bans them from striking. Previously an opponent of the bourgeois and capitalist values, he comes to regard corporate structures as the proper avenue towards state control of the economy. His revolution has replaced the ‘establishment’ with a more militant, more nationalist, more religious, more imperialist establishment.

Writing the official encyclopedia entry on fascism in 1932, when he is running the country and all its cultural institutions with an iron fist, Mussolini positions his ‘socialism’ as “the complete opposite” of Marxian socialism, which he defines as a belief that

the materialist conception of history of human civilization can be explained simply through the conflict of interests among the various social groups and by the change and development in the means and instruments of production.

[…] Fascism, now and always, believes in holiness and in heroism; that is to say, in actions influenced by no economic motive, direct or indirect. And if the economic conception of history be denied, according to which theory men are no more than puppets, carried to and fro by the waves of chance, while the real directing forces are quite out of their control, it follows that the existence of an unchangeable and unchanging class-war is also denied – the natural progeny of the economic conception of history. And above all Fascism denies that class-war can be the preponderant force in the transformation of society.

[…] After Socialism, Fascism combats the whole complex system of democratic ideology, and repudiates it, whether in its theoretical premises or in its practical application. Fascism denies that the majority, by the simple fact that it is a majority, can direct human society; it denies that numbers alone can govern by means of a periodical consultation, and it affirms the immutable, beneficial, and fruitful inequality of mankind, which can never be permanently leveled through the mere operation of a mechanical process such as universal suffrage.

Mussolini is drafted, but discharged in 1917 after a grenade training accident that he calls “the most beautiful moment of my life.” Returning to his paper and his politics upon his recovery, he ends the war as a popular figure with fast-growing, fanatical support.

Antonio Salandra, the authoritarian conservative Prime Minister who takes Italy to war in 1915, has already been forced to resign after battlefield reversals in 1916. In the postwar disappointment over the Treaty of Versailles, Salandra endorses the rise of Mussolini, who in turn makes him a senator in 1928. The transition from radical to reactionary has been completed long before Mussolini becomes Il Duce. 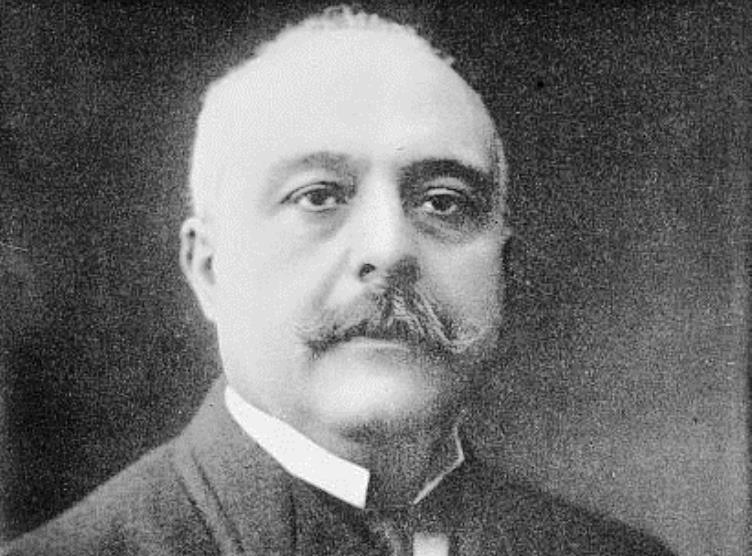 Antonio Salandra, the right wing Prime Minister who launched Italy’s disastrous war against Austria, influenced and advanced Mussolini in his rise to power — which culminated in another disastrous war for another unprepared Italy