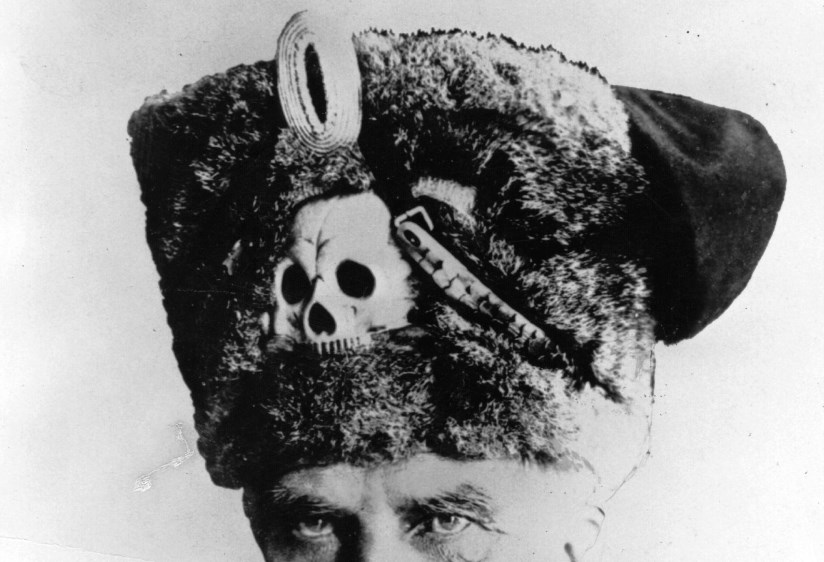 The Battle of Łódź is a very near thing today as General August von Mackensen withdraws his right flank just in time to avoid being surrounded and completely destroyed by one Russian army in his own attempt to surround and destroy a second Russian army. The heaviest fighting over the last three days has taken place in near-zero temperatures and blinding snow; wounded men quickly freeze to death, and frostbite injuries are common. The lines of battle soon steady, and fighting will peter out in two weeks with a minor German advantage. Neither side will forget these bitter days.

Yet Mackensen is more comfortable than most, for his immense hat is quite snug and warm. The traditional Hussar’s headgear is designed for survival on the windswept steppes of Poland and Prussia, where unnumbered cavalrymen have galloped and swung their sabers with great huzzahs! over the centuries in all sorts of terrible weather. Mackensen began his career in the cavalry, and is privileged to wear this particular hat — complete with its distinctive adornments — for having served in the Hussars.

Mackensen’s Hungarian hat is not like other hats of the Great War. The frilly, feathered wonders of kings and commanders only mark their wearers as important, whereas Mackensen’s hat sets him apart as an elite cavalry warrior. Fronting the furry ‘busby’ or ‘shako’ of the Hussar’s cylindrical top-cover is the distinctive grinning skull, or Totenkopf, a traditional symbol of the Prussian warrior. In the Nazi era, when Hussars are as obsolete as bows and arrows, the Totenkopf will be adopted by an infamous new elite formation: the Schutztaffel, or Waffen-SS. 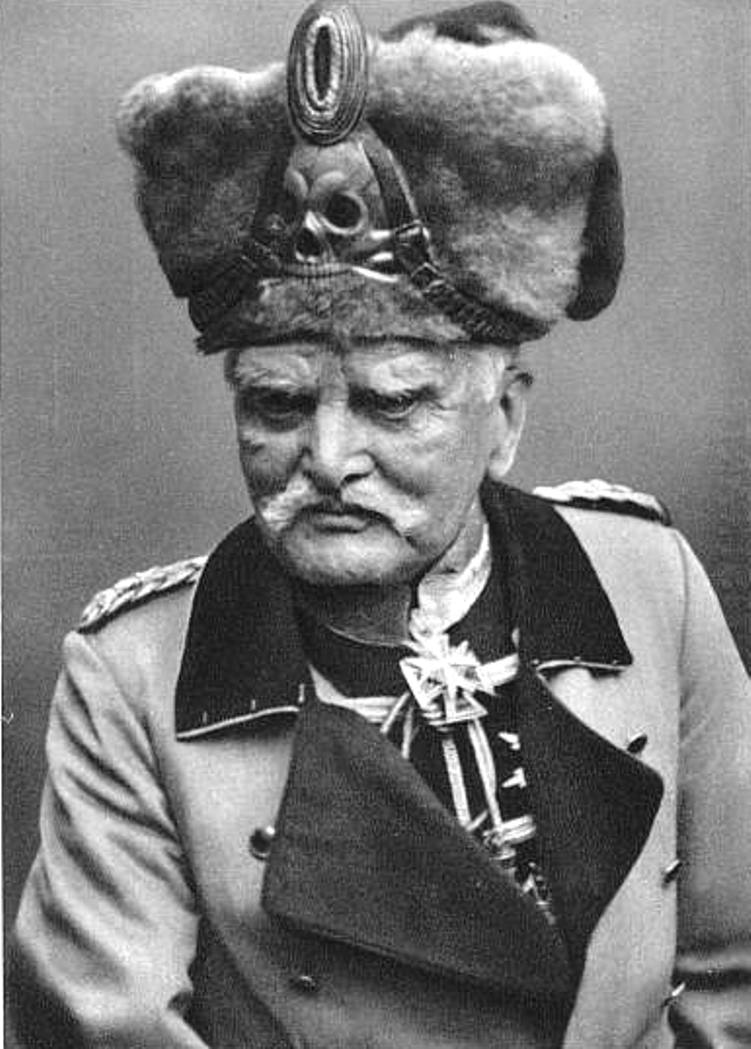 Mackensen’s hat is the most amazing headgear of the Great War, bar none, for any army. The little bag hanging off the top was originally longer, and tied to the right shoulder to provide some defense against saber-cuts while fighting other horsemen. This picture was taken very late in life; in his younger years, Mackensen’s mustache could be spectacular, too

When the battle ends, the Russians have abandoned Łódź, and Mackensen has dealt terrific damage to a force twice the size of his own. The Russian Stavka makes much noise in the worldwide press tomorrow about 45 trains that they have dispatched to bring back the expected abundance of prisoners, but their cars mostly return empty, for it is Mackensen who has made away with 16,000 Russian captives.

There have been bloody errors on both sides due to communications lag, for the opposing generals lack telephone lines and must use message runners. Relying on radio signals intelligence (SIGINT) reports that read a bit too much meaning into enemy communications, Mackensen advanced on Warsaw, but halted when he encountered stiff resistance along a line of fortified towns in Russian Poland.

Overall, he has achieved Field Marshall Paul von Hindenburg’s objectives of ending the Russian threat to German Silesia and inflicting disproportionate casualties on his much larger foe. Tactically, Mackensen has been out-generaled and nearly deafeated, but with Erich von Ludendorff‘s knack for press management he will be credited with a major strategic victory worthy of his amazing hat. 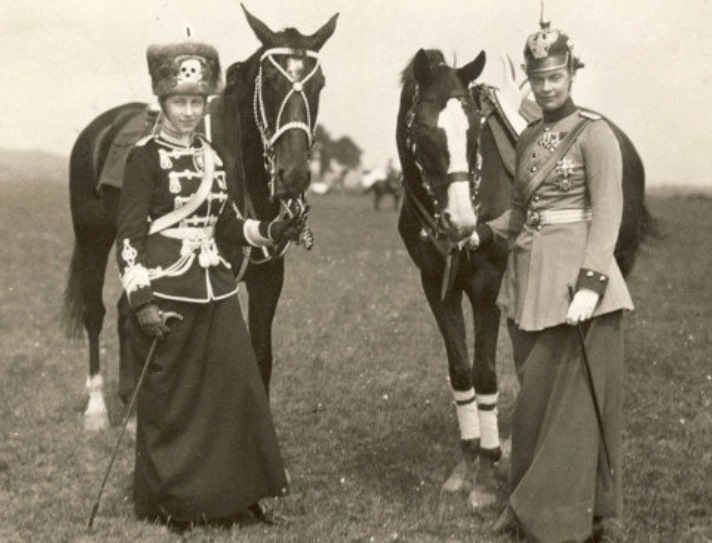 Mackensen and his hat are an important transitional figure in the passage from the Second Reich to the Third. Adolf Hitler, who is now serving in the Bavarian Army near Ypres, greatly values the approval of hero-generals from the Eastern Front, including Mackensen, Hindenburg, and Ludendorff. Unlike the war of attrition that is consuming German lives on the Western Front, their victories against superior numbers in the East are fondly remembered, and exactly the example that Hitler wants to emulate. Hindenburg’s state funeral at the Tannenberg memorial in 1934 is just one example of this conscious effort to maintain a continuity between the battles of the Eastern Front in the First World War and Hitler’s preparations for a Second; Mackensen is there to salute his fallen commander, and he is wearing his gloried headgear.

The Nazi obsession with pomp and ceremony is part and parcel of our human memory of their regime. Hitler’s entire army is snappily-dressed while they goose-step towards apocalypse. Even as his nation’s industries collapse, Hitler takes great interest in the regulation, style, and profusion of uniforms. One sign of the influence that the Second Reich has on the Third is that Hitler’s Sturmabteilung (storm troopers) wear the distinctive brown shirt of the men who committed the Kaiser’s experimental African genocide in 1904. Another is the intentional conflation of his SS troopers with the ancient Prussian Hussars.

Having endorsed his Führer with fawning obeisance, receiving much adoration in return, Mackensen lives just long enough to see his country utterly crushed in a Second World War that is bigger, bloodier, and more disastrous to Germany than the First. He is 96 years old — and still looks like a badass in his hat. 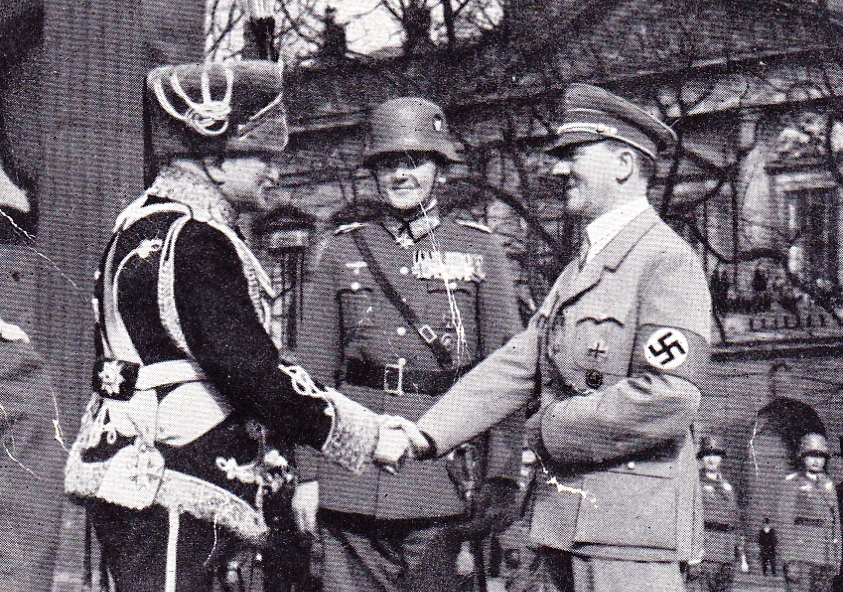