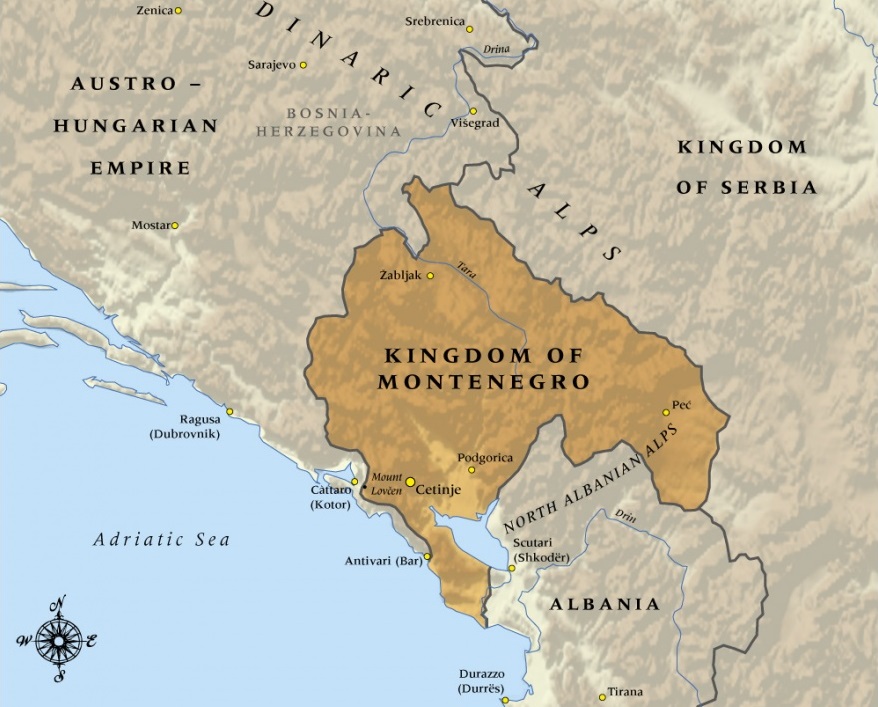 When the declining Ottoman Empire ceded Bosnia and Herzegovina to the Hapsburgs in 1909, the ruler of Montenegro saw an opening for greatness. Having been sovereign over the province for decades, expanding it through aggressive wars against what are now Austrian provinces, Nicholas I took the title of king the next year. Always ambitious, during the bloody Balkan wars of 1912 and 1913 Nicholas aggressively increased his territory at the expense of his neighbors again, especially the Kosovars and Albanians.

United by language, but famously suffering high rates of homicide over matters of honor, Montenegro is a violent land. So if you asked the elite of Europe in May of 1914 which Balkan province they expected to spark a global conflagration one day, they would have agreed on this one. Small, mostly-Roman Catholic, mostly-Serbian, the Montenegrin nation resisted Turkish domination for centuries. Nicholas has regarded Austria as yet another empire, and despite many generous offers of aid and arms from Austria in exchange for their neutrality in the war, he saw another chance to enlarge his domain. His army entered Austrian territory within a week of the war’s declaration.

Considering the small size of his military forces, the decision seems bizarre. After years of fighting, Nicholas has just 45,000 half-uniformed foot soldiers organized in battalions by clan affiliation. They are mostly armed with old Russian rifles — and fewer than 100 field artillery pieces, many of which were provided only recently by France. Ammunition must be resupplied from Marseilles through an Austrian naval blockade, which is only partially lifted by increasing allied naval strength in the Adriatic. Montenegro has just 26 miles of railroad, and most of its roads are terrible; many of the mountain passes can only admit single-file foot traffic.

Of all the countries now engaged in the first global industrialized war, Montenegro was the most likely to do so, but was also the least equipped for it. 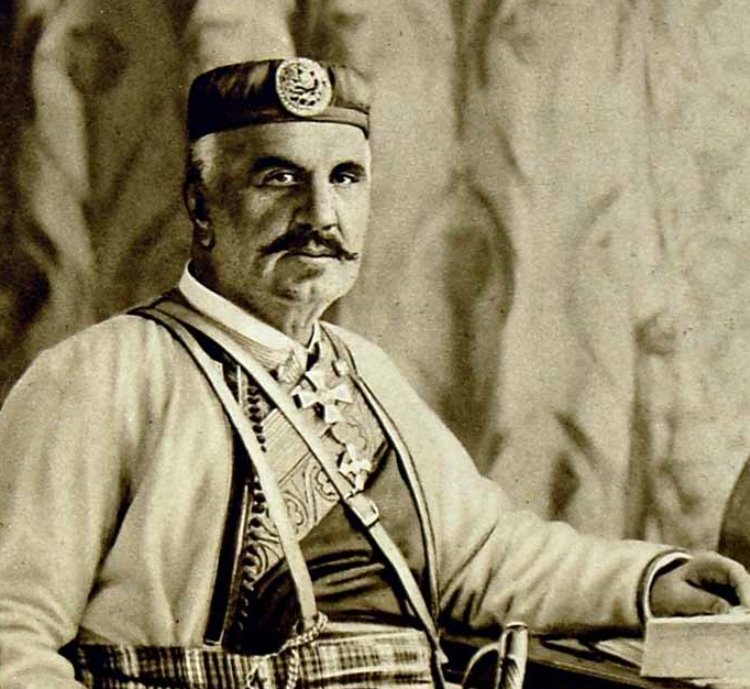 Nicholas I of Montenegro was known as ‘the father-in-law of Europe’ because his daughters married so many princes, including the kings of Serbia and Italy. Neither alliance could save his regime

The Austrian fleet has shelled Montenegrin refugees from Austrian territory who were huddled in their coastal hill camps. They have also made the infrastructure problem worse by bombarding the seaport of Antivari, damaging the harbor facilities and one of two French-built radio stations in Montenegro, along with the electricity plant that powers it. In response, Montenegrin batteries shelled the Kriegsmarine’s base at Cattaro from Mount Lovćen, and a British flotilla has attacked the Austrian anchorage in similar fashion.

Since the first Austrian invasion of Serbia, Montenegrins have helped their Serb partners occupy Kosovo and attacked their common foe in the Drina River valley. After a second abortive attack, the Hapsburg army is now on its third, temporarily-successful invasion, during which they will take the Serbian capital at Belgrade for two weeks. Today, a Montenegrin force advancing from Grahovo to support their Serbian ally’s counteroffensive suffers stinging defeat. Although we know little about today’s battle, we do know that Nicholas lacks the strength to threaten Bosnia much afterwards — and that Cattaro remains safely in Austrian hands.

Nicholas also has another headache on his southern flank. Little Albania, a mostly-Muslim nation that has lost Catholic territory to Nicholas before, is attacking Montenegro in a bid to win those lands back. 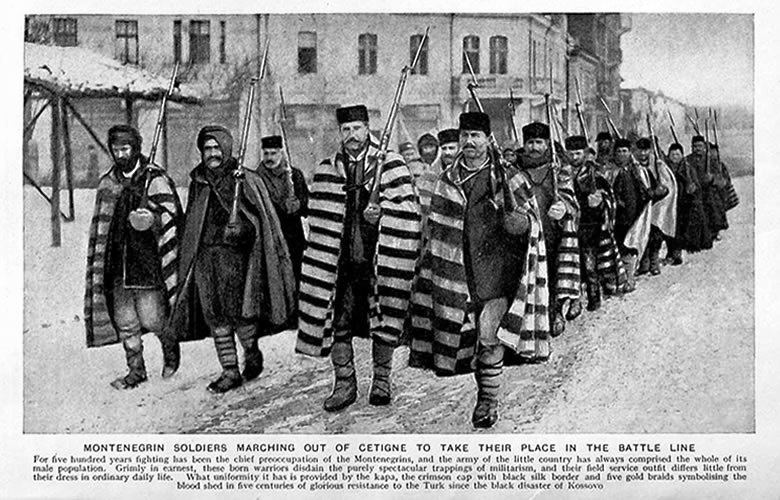 Montenegrin infantry on the march. Their traditional footgear was terrible for wet weather conditions or undrained trenches

Foreign troops have been on the scene here since the beginning. When Montenegro declared war despite entreaties and inducements from Vienna, there were already 200 French troops inside Montenegro. It took time for the British and French navies to gather strength, and they are not very good at joint operations yet. Neither ally can spare any troops for this front, either. Instead of letting Nicholas bleed his country dry, the Triple Entente prevail upon him to protect their lines of communication with landlocked Serbia.

Montenegro will not see another significant allied presence until Italy enters the war. Lying just across the Adriatic Sea, the Italians have always had ties with these Balkan lands; the ancient Illyrians lived in what is now Montenegro and Albania, influencing the culture of Rome long before that empire conquered them. Italy’s government, which dreams of winning Austria’s coastal provinces, also has war aims for greater influence on the opposite shore. Yet even the Italians cannot provide enough troops to sustain serious offensive operations here, for they are quickly bogged down in an icy hell of alpine warfare. 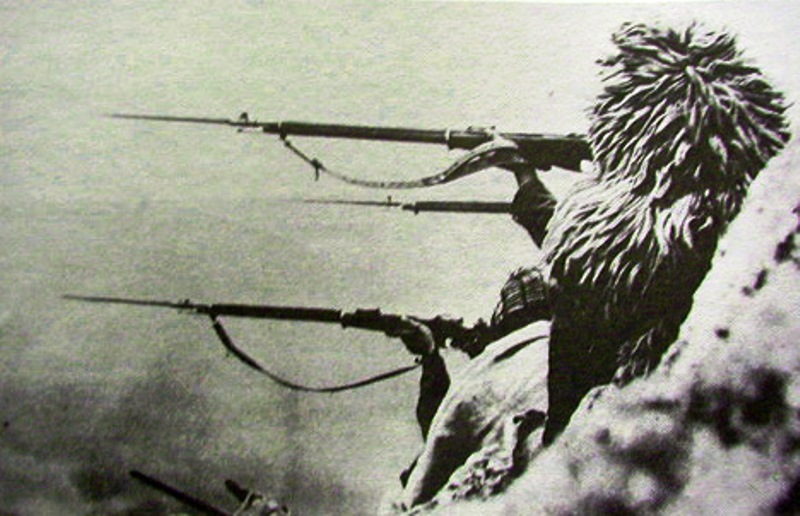 Not even his relationship to Russia is enough to tip the manpower balance in Nicholas’s favor, or modernize his army sufficiently to sustain the kind of war being fought on other fronts. Despite his decades of careful dynastic and diplomatic engagement, Montenegro will be overrun by an Austrian and Bulgarian army in 1916, and his government-in-exile will lose a power struggle with King Alexander for the throne of a new Yugoslavian nation that combines Montenegro with Serbia.

Nicholas’s nation will not be independent again until the end of the century.