Above: the British fleet anchorage at Scapa Flow, chosen for its size and location. It was perfectly-positioned for keeping the German High Seas Fleet confined in the North Sea.

All the powers at war already control their compliant presses, and none of them are strangers to the basic principles of public relations and propaganda. But an announcement by the British Admiralty 100 years ago today, in which the North Sea is declared to be a “military area” beginning on the 5th of November, offers an important example of meta-propaganda — the spinning of misinformation and falsehood into further misinformation and falsehood, committing crimes against truth for the noblest of purposes. It begins:

During the last week the Germans have scattered mines indiscriminately in the open sea, on the main trade route from America to Liverpool via the North of Ireland.

Peaceful merchant ships have already been blown up, with loss of life, by this agency.

So far, so good: the Admiralty underestimated the threat of German mines, and indeed they are taking a toll on merchant boats, fishermen, and navy alike. As if to underline the point, tomorrow three civilian ships will be destroyed by mines in a single day. But then the announcement veers into the world of make-believe:

The White Star liner Olympic escaped disaster by pure luck and but for warnings given by British cruisers other British and neutral merchant and passenger vessels would have been destroyed.

In fact, six days ago the Olympic — a sister ship of the ill-fated Titanic — assisted in the attempted rescue of the battleship HMS Audacious after she struck a mine during gunnery practice. Her captain even established a tow line, though it broke while pulling the sinking ship in rough seas. Olympic‘s American passengers are already piercing the veil of Admiral Jellicoe’s press clampdown on news of the sinking, but the weak cover story that was given to the British papers regarding that incident is now being used to sell a pure fantasy.

These mines cannot have been laid by any German ship of war. They have been laid by some merchant vessel flying a neutral flag, which has come along the trade route as if for purpose of peaceful commerce, and, while profiting to the full by the immunity enjoyed by neutral merchant ships, has wantonly and recklessly endangered the lives of all who travel on the sea.

This is nonsense, as the mine that sank Audacious was laid by the SMS Berlin right under the nose of the British Navy. The overall purpose of the Admiralty’s order is sound enough; they want to create safe shipping lanes that can be cleared of mines on a regular basis, limiting the danger and the damage to their maritime empire. But however good their plans for the safety of vessels in the North Sea are, the Admiralty’s sales job is a snow job.

Britain began the war without enough minesweepers. By the end of the war, as many as 500 ships will sweep the North Sea every day for mines, with more than 700 dedicated boats operating in 55 different flotillas. Ironically, Britain herself lays so many mines by the end of the war — against German submarines, and in its long siege of the German High Seas Fleet — that demining operations last an entire year after the Armistice and cover some 40,000 square miles.

To prevent unnecessary civilian losses, the prewar Hague Conventions required that naval mines explode after they lose their mooring and float to the surface. Minesweeping operations therefore generally involve a cutting line suspended between two boats which snaps the mooring chains, bringing the mines to the surface to explode. Many do not, however, since the technology is unreliable. These are generally dispatched with well-aimed rifle fire that breaks the distinctive ‘Hertz horns’ on the contact mine, detonating it at a (hopefully) harmless distance.

Obviously, minesweeping is an incredibly dangerous activity, and in the course of the war plenty of minesweeping crews are killed by the very weapons they are trying to destroy. 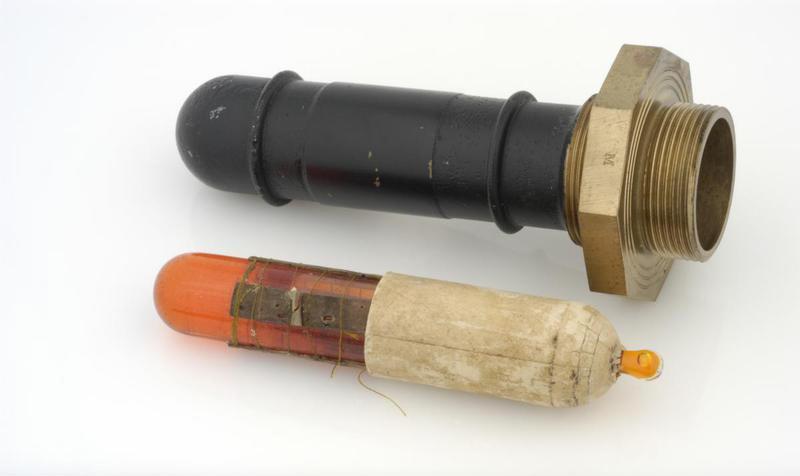 A so-called ‘Hertz horn,’ the revolutionary triggering component that allowed the manufacture of the first reliable contact mines. The ampule of conductive fluid would break inside the soft metal tube when it bent against a ship’s hull, igniting the mine. Photo via the Imperial War Museum

Today’s announcement also says nothing about submarines, which are already emerging as a much greater threat to military and commercial ships than mines will prove to be. Here, too, we can find meta-propaganda at work: after the sinking of the HMS Pathfinder two months ago, newspapers asked the Admiralty to confirm or deny an unsubstantiated report that a German U-boat was sunk at the scene. The response was to confirm not one, but two U-boats destroyed — when in reality, the U-21 was never even sighted. Now, the memory of the Pathfinder’s supposed revenge is being invoked to promote submarine awareness.

But we should also understand the timing of this announcement in terms of the surface fleet, not just the undersea threat. Today the Admiralty is still reeling from the Battle of Coronel yesterday, in which two of their cruisers were destroyed by a superior German force off the coast of Chile. Six weeks ago, the HMS Pegasus was surprised and annihilated by the SMS Königsberg, and the SMS Emden has been running amok in the Indian Ocean for fifty days. The pride of the British Navy has been struck many hard blows lately, yet the Kaiser still refuses to let Admiral Jellicoe and the Admiralty have the decisive battle with the High Seas Fleet for which they yearn so much. To top it all off, yesterday Carl Hans Lody was found guilty of espionage for spying on fleet movements.

Frustration, humiliation, and paranoia are normal features of combat defeat and wartime stress. All of them are reflected in the Admiralty’s announcement today.