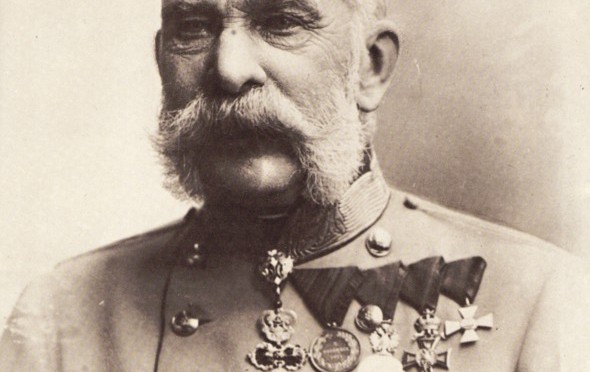 Twenty-one days after the assassination of Archduke Ferdinand and his wife Sophie, the council of Austro-Hungarian Ministers approves their draft ultimatum to Serbia. Serbia does not face unreasonable demands: the empire wants a transparent investigation of the murders in Sarajevo and an end to Serbian designs on imperial territory, but makes no demands for territory from Serbia and requires no harm to their national prestige or sovereignty.

Emperor Franz Joseph does not want war, which could very well break his fragile regime — and his empire with it. In an effort to further isolate Serbia, which is seen as a rogue state by the rest of Europe, these reasonable demands will not actually be delivered for another week. Yet it is actually this delay which allows the Czar time to intervene, setting the clockwork mobilization of armies into motion.

Why blog about the First World War, once known as the Great War? Because this man-made disaster, which consumed some fifteen million lives worldwide, began despite the best intentions of cautious leaders who were not eager for war. In 1914, streets all over Europe are abuzz with anticipation; militarism is often more popular in her great cities than in her halls of power. Generals push for war in councils, yet their monarchs are still holding out to see what everyone else will do. No one wants to risk their crown by moving first.

The moment of decision may already have passed, though.

Had Emperor Franz Joseph mobilized his army to attack Serbia in a punitive expedition at the moment he learned of his son’s assassination, it is likely that the Czar would still be vacillating 100 years ago today, and the Austro-Hungarian army would already be fighting to some sort of decision with their troublesome neighbor. It is tempting to think that a rapid mission might have sufficed, ending the Great War before it began. But the empire is weaker than it looks: ethnically diverse, with more than a dozen languages spoken in its ranks, the imperial army is not large enough to fight both Serbia and Russia at the same time. The “balance of power” in Europe has been undermined by the weakness of its central power. Franz Joseph is so cautious of Russia that he actually invites the fate he sought to avoid.