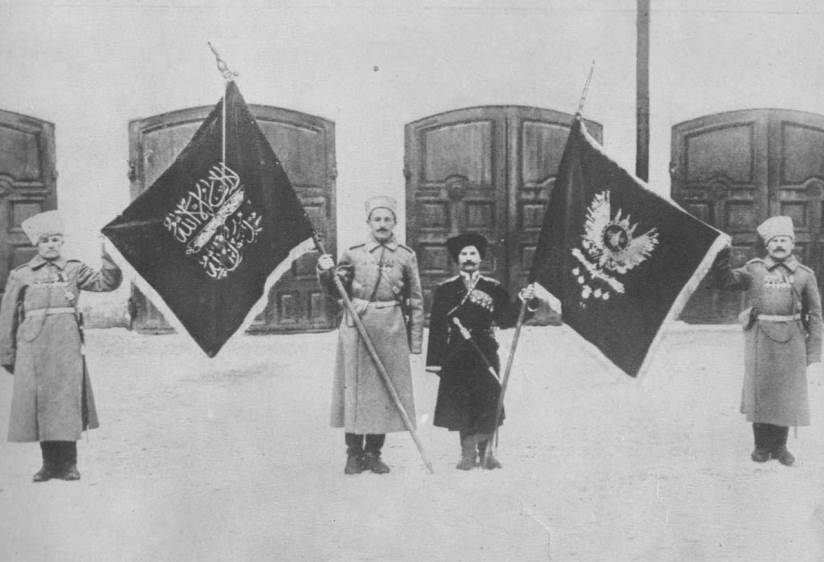 The only fortified city in eastern Anatolia, Erzurum (alt. spelling ‘Erzerum’) is perhaps the strongest fortress in the entire Ottoman dominion. Surrounded by forbidding mountain peaks, it is also a vital crossroads connecting Turkey with Mesopotamia and Persia, and therefore a natural strategic target for the invading Russian Army commanded by General Nikolai Yudenich, who began his attack five days ago in the teeth of a bitter winter. Indeed, the apparent impossibility of military operations in such conditions adds an element of surprise when he sends his men over undefended heights south of the city that the enemy had deemed impassable with snow and ice.

While the 39th Division drives right into the teeth of the two forts at Deve-boyun, accepting high casualties to fix the enemy’s attention, other units maneuver to envelop Erzurum. On his left, the 4th Caucasian Rifle Division tops Kargapazar Ridge and Kop Mountain. To his right, Turkistan troops attack into the Gürcü-boğaz defile and its three forts, with the Don Foot Brigade crossing over Kandil-dağ to support them against the last one, almost dropping right on top of the defenders. When these forces linked up at last on the 13th, they were able to attack the strong fortress at Tafet from three sides, and it fell the next day. By yesterday, they were advancing into the plain of Erzurum itself. 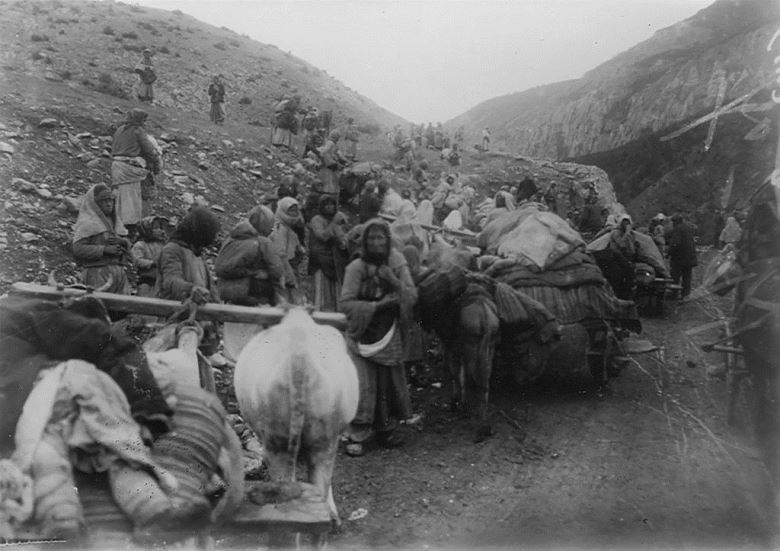 A picture of genocide: Armenian refugees from Erzurum being forcibly marched to their deaths during 1915

With the Ottoman Third Army still not restored from its near-total destruction fourteen months ago at Sarikamish, commander Mahmut Kamil has depended on the advice of German troops with superior training and doctrine. They are the reason his defenses include barbed wire entanglements, for example, and they make up a disproportionate amount of his headquarters staff. So when they began to disappear yesterday, demoralizing their Turkish allies, Kamil saw the writing on the wall, deciding to withdraw at first light and set up a new line of defense eight miles west of the city. Informed by air reconnaissance that a river of soldiers and civilians is streaming from Erzurum today, at 9:40 AM Yudenich orders the final advance. Trenches and wire barely slow his forces down, and before noon his cossacks are the first troops to enter the city itself. His after action report enumerates the spoils:

During the assault on the fortress several Turkish regiments were annihilated or made prisoners with all their officers. On the line of forts alone we took 197 pieces of artillery of various calibers in good condition. In the defense works of the central fortress we took another 126 pieces of artillery. In the fortified region of Erzurum we took a large number of depots of various kinds, which have already been mentioned by the Headquarters Staff.

It is possible to estimate the force of the blow which we dealt the Turkish army, whose demoralized remnants are now withdrawing in disorder towards the west, if only by the fact that some Army Corps of three divisions now only number from 3,000 to 5,000 men with a few guns. All the remainder have either fallen into our hands or perished in the fighting, or from the cold.

Nor has Yudenich’s command escaped the dangers of cold weather fighting; in fact, his command has suffered as many injuries from frostbite as it has from enemy action. It is therefore understandable that his pursuit of the enemy is slow, failing to annihilate the retreating Third Army. Enjoying their new digs, Russian soldiers take the time to pose for photographs with captured enemy flags (see photo at top). Meanwhile, the supporting Van-Azerbaijan Force takes the city of Muş today, allowing the Army of the Caucusus to advance west of Lake Van at last, and the city of Bitlis falls on March 3rd. 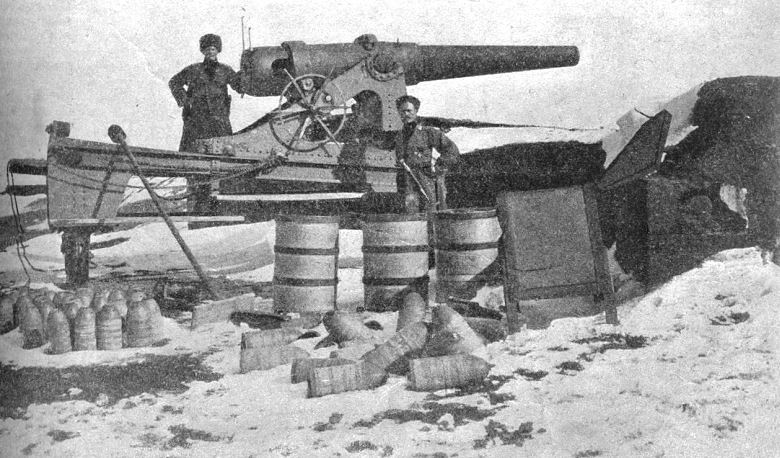 Altogether, more than 40,000 Turkish soldiers have died. Yudenich’s offensive is forced to a halt in March and April, but not by lack of will. Rather, the logistical difficulty of feeding, arming, and supplying his men proves too much in such an environment. Wagons cannot negotiate snowed-in mountain switchbacks, while the nearest friendly railhead is well over 100 miles behind him. Having lost only 2,300 soldiers taking Erzurum, casualties begin to mount as units march farther west. Nevertheless, he has ‘liberated’ most of western Armenia from its Turkish oppressors.

If only more Armenians were left to celebrate the moment. The vast majority of the Armenian population has been forcibly displaced, while Armenian regiments have been turned into labor battalions and then massacred. Ostensibly aimed at securing the area from revolt, these actions have in fact made it harder to protect the region around Erzurum; without Armenian farmers, there is less food to supply a defending army. And now a second great forced migration is taking place. Prior to Yudenich’s offensive, more than 700,000 Turks lived in Erzurum; now, nearly 490,000 have taken to the hills, and over 200,000 of them will die of exposure, hunger, or disease. Those who stay behind will find the Russian occupation more civilized than they had expected, yet the demands of an occupying garrison are never exactly kind to civilians who are already short of food, medicine, and everything else.

War Minister Enver Pasha, who led the disaster at Sarikamish, now sacks Mahmut Kamil and sends Mehmet Vehip Pasha in his place with the 9th and 13th Infantry Divisions and orders to link up with the 10th Division, forming a new V Corps. But this is easier said than done, for the Turkish rail system is already under severe stress. Delays soon add up, and some of Vehip Pasha’s units take up to eight weeks to travel east from Constantinople. Having only recently won a great victory over the Entente allies at Gallipoli, Turkey now plunges back into the darkness of military despondency. Harassing attacks in the Sinai must be attenuated, while pressure on British forces now besieged in Mesopotamia slacks off and the campaign against Persia must be entirely canceled. Worse, tens of thousands of Arab recruits have begun to desert en masse, threatening Ottoman control of the Levant and Arabia. The Ottomans’ war is looking grimmer all the time. 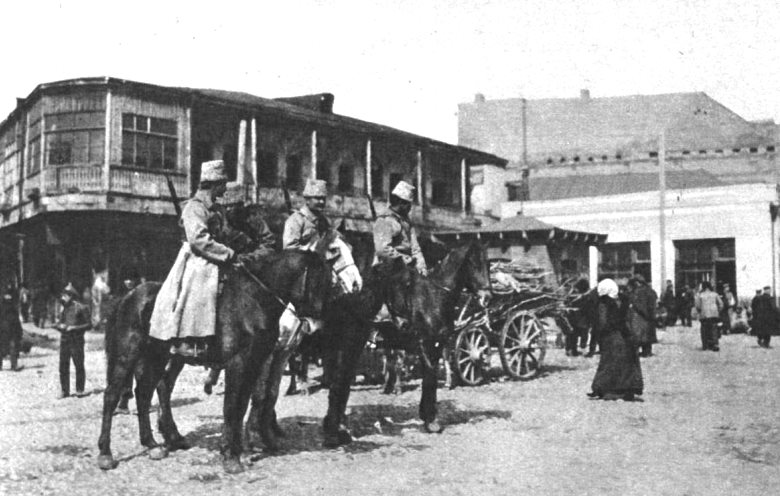 Cossacks police a street in Erzurum