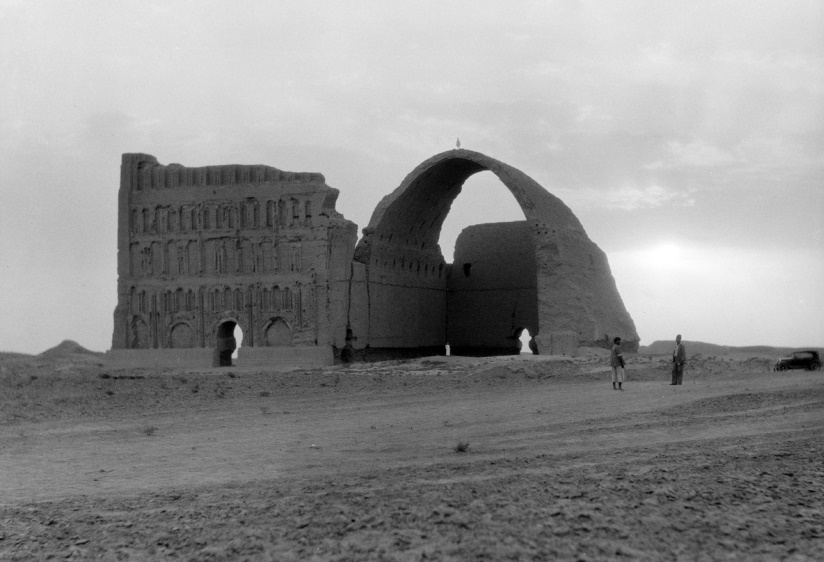 Mesopotamia has always been a graveyard for empires, even the ones which have risen there. When the Roman emperor Julian led his legions on the Persian capital at Ctesiphon (see above) in 363, his miscalculations and logistical woes turned an initial victory into defeat and death; Constantinople would not undertake another major military offensive for nearly two centuries.

Today, the British Empire marches on the same ancient city, which is located 28 miles down the Tigris river from Baghdad, in hopes of breaking the Ottoman Empire. The attacking forces have scored a long string of victories in the last year as they came north: after being welcomed by the Shi’a residents of Basra, British and Indian soldiers beat strong Turkish armies sent out to fight them at Shaiba, at Amara and Nasiriyeh, and most recently at Kut al-Amarah. But each victory has extended their supply lines farther along a river that has dropped with the dry season until it is almost unnavigable. The few roads are sketchy affairs, while the military railway out of Basra is still not long enough to support operations this far north.

Whatever else we may say in order to assign responsibility for the disaster that now begins, we cannot blame it all on General Sir Charles Townshend. Already more than 350 miles from the Persian Gulf, he was wary of making any further progress without first improving his logistical train and bringing in trench warfare equipment. But he was overruled by Britain’s regional Commander-in-Chief, Sir John Nixon, who wants him to press on for Baghdad with the 6th Poona Division.

And truth be told, there is plenty of political pressure on Townshend. London is desperate for a victory, as there have been none this year. Major operations on the Western Front have gained little ground at tremendous cost; the Gallipoli landings are a debacle. The Indian government — meaning Imperial Viceroy Lord Henry Hardinge — supports Nixon without reservation. Townshend has thus moved on Baghdad against his better judgment. 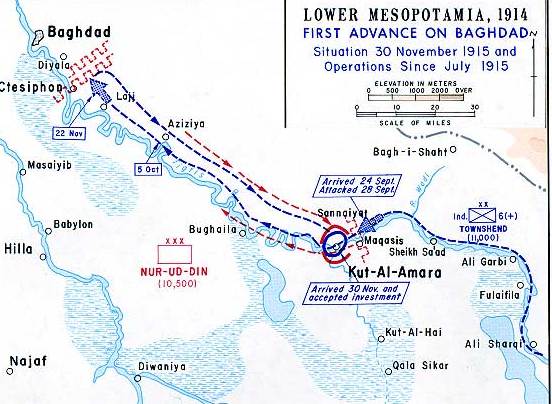 Approaching on the solid eastern bank of the river rather than the marshy and uncertain western side, Townshend has an airplane to conduct reconnaissance, but only one. He knows the enemy has a double line of defenses, and even and inkling that he is outnumbered. But his force is unhappily surprised to be outgunned as well, for Colonel Nureddin Pasha has more than two dozen batteries arranged to cover approaches efficiently with preregistered indirect fire. The new river monitor Firefly and her companion gunboat prove extremely vulnerable to massed artillery and mines, so they are quickly neutralized as assets.

Seeking to win through surprise, Townshend gives orders for a night march in order to attack at dawn today. This is far more difficult to do in flat, open desert terrain than one might expect, for without brilliant illumination it is hard to see landmarks by which to navigate. Blundering in the darkness, the three columns reach their objectives piecemeal instead of in unison, allowing Nureddin to deploy his superior reserve power and blunt Townshend’s flanking attack. At the end of the first day, British and Indian soldiers lie exhausted in captured Turkish front-line positions, the air filled with the piteous sounds of wounded men, many of them injured whilst marching in open ranks across open ground.

No worse than many British generals, Townshend’s plan is also no more imaginative than most, and on the second day his attempt to repeat the previous plan is also foiled by fire. Short of grenades and other trench-fighting weapons, with the 45th Division rendered hors de combat, he has managed to recreate the attrition battles of the Western Front — but thousands of miles away from any supply center or bases which could sustain such a battle for another day.

He withdraws in the morning. When Nureddin, who was falling back to another position, hears the news of the British retreat, he reverses course and pushes his men to chase after on Townshend’s heels. 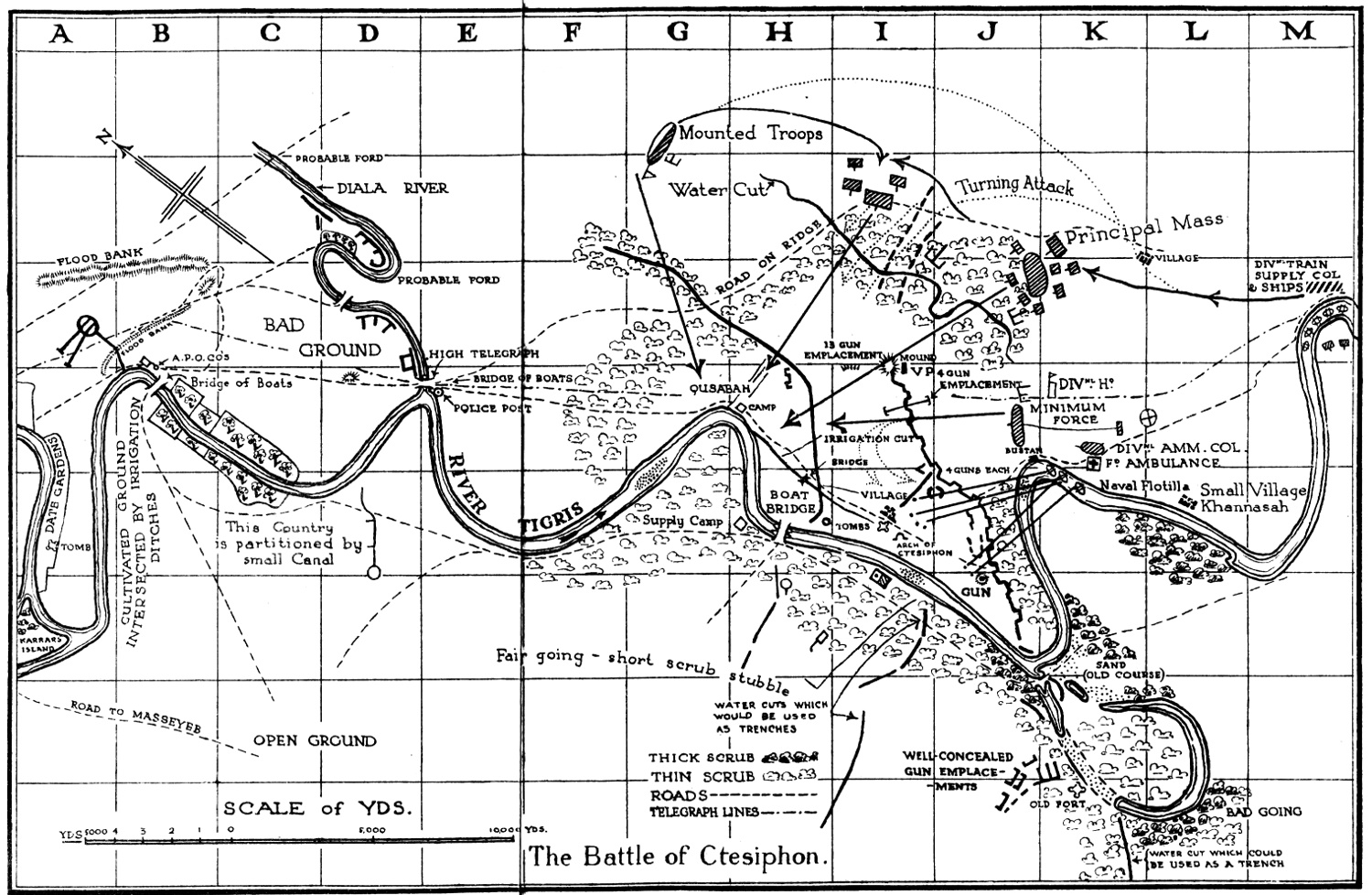 A map of the Battle of Ctesiphon. Click to embiggen

It is not easy to move a wounded man 80 miles in such territory, especially with enemy harassment. During the sad withdrawal of Townshend’s shattered force, British casualties are hit and killed by enemy fire on the open decks of river ships serving as ambulances, or dragged the entire distance by draft animals in springless litters that leave them black and blue. The British medical corps is as inadequate as the rest of the expedition, and conditions are terrible, with flies and mosquitoes swarming helpless men. Altogether, 4,567 men have been killed or wounded out of an 11,000-man army, and both gunboats are sunk by shore fire in the getaway. More than 6,000 Turks are dead, but this is cold comfort in defeat.

Entering Kut with his ragged and whipped mob, Townshend does not realize that he is still too far forward. Overextended, his army is in mortal danger, vulnerable to being surrounded and cut off if he stays in Kut. Townshend’s decision to stay there will set up one of the greatest military disasters in the history of the British Empire. 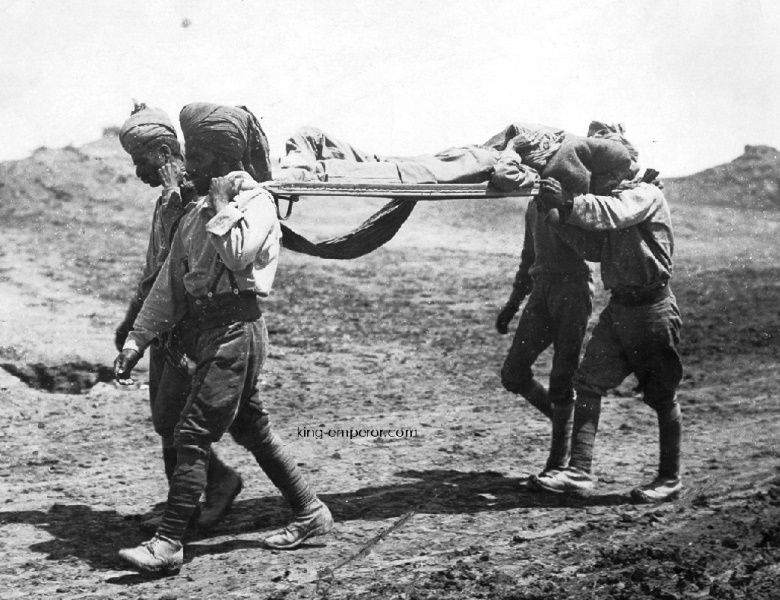 This is probably a posed photo; few casualties could have been afforded four bearers during the retreat