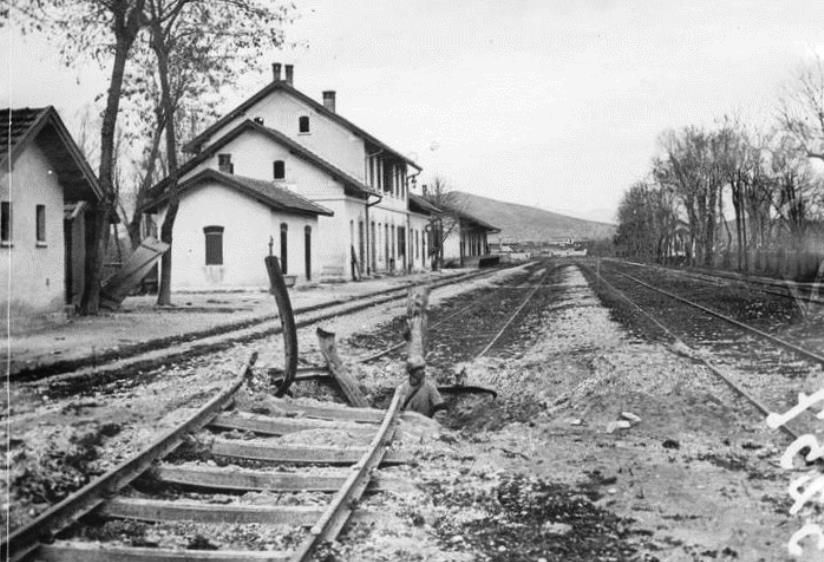 The Battle of Krivolak, Serbia’s last great stand against the onslaught of three invading armies, has been underway for almost four weeks. Fighting has raged around the rail station at Monastir (see above) since Bulgarian troops first encountered French forces there in October, but the main direction of the Central Powers’ attack is the Serbian kingdom itself. Telegraphing London from the Macedonian town today, a correspondent tells the world that he is witnessing “the last days of Serbian rule” in Monastir, now largely deserted.

It was in total darkness, and its empty streets re-echoed the footsteps of the civilian guards. A few scared officials alone remained, in addition to the military. Three war correspondents, who groped their way through the town, encountered only the flashing bullseye lanterns of the guards. One place was lighted, namely, a cafe in which a group of priests and officers talked in whispers. “All faces are anxious,” the narrative proceeds. “They are expecting the worst news. One question only is asked — Will the enemy appear to-night or to-morrow? An officer enters. He is evidently the bearer of serious news. Gen. Vassitz warns the Consuls that he will be no longer able to protect them, and they and ‘nationals’ leave; all except the French and British Consuls, who are awaiting the momentarily expected arrival of the British and French marines from Belgrade. Finally these, too, are prepared to depart by the last train, which is standing in the station, when Gen. Picot — the French leader of the allied forces at Belgrade, walks in, a lean, attenuated, but still erect figure in the French naval uniform.

“He informs the eager bystander that he has ridden ahead of his men to reconnoitre the town, which he was afraid was in Bulgarian hands. The French marines march in at 2 o’clock in the afternoon. They sit down at the sides of the streets, done up by their forced march of 200 miles. Though weary, they are as hard as iron. The British Consul, Mr. Craig, waits on, hoping for the arrival of the British marines. They are two days’ march behind the French, and were due at Dibra on the night of the 15th Mr. Craig sent away British motor lorries to fetch them in, and it was hoped that they would arrive on the morning of the 17th.”

It is a portrait of retreat that matches events elsewhere in Serbia today. Twenty-six miles to the northeast of Monastir, the Bulgarian Army takes Prilep, piercing the center of Macedonia and cutting off the secondary rail link with Serbian forces. Sixteen months after the Austrian emperor fulfilled his ultimatum and sparked this worldwide conflagration, the beginning of the end of Serbia seems to be at hand.

Of course, matters are not totally even everywhere. A Bulgarian attack along the Cherna river is repulsed with heavy losses today, buying more time for the allied retreat through Monastir. But even the most optimistic strategist can see what is about to happen, and so the French and British units within the Serbian kingdom are all leaving it as quickly as possible to reach their safe base at Salonika. Reluctant to abandon their homeland, the Serbs are nevertheless within a week of beginning their own mass retreat to the Aegean shore — right as a cold, wet fall turns into winter.

Despair is an omnipresent threat now at tactical and strategic levels. With allied forces visibly stymied on the Gallipoli peninsula, Russian armies demoralized, failed September offensives in France, and their Balkan ally succumbing to defeat, the Entente powers face increasingly-dire circumstances, with no clear victory emerging on any front. The treacherous Balkan terrain is often terra incognito to the armies of the Central Powers, whose maps are mostly inadequate. Otherwise, their pursuit of the allies might be much closer — and even more dispiriting. 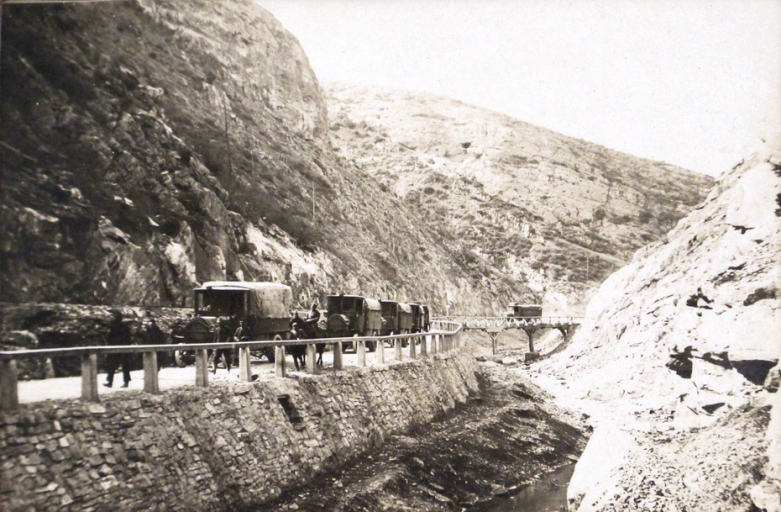 A German motor column. Steep, narrow, and lengthened by switchbacks, this is the best highway in Serbia

Mecedonia was one of Bulgaria’s demands in order to stay out of the war, and Serbian refusal to entertain any territorial concessions galvanized Bulgarian relations with Berlin and Vienna and Constantinople. Having promised Macedonia to Tsar Ferdinand in exchange for his alliance, the Central Powers are now quite close to fulfilling their vow ‘on the ground.’ Bulgarization will follow in supremely short order as street signs are replaced, schools staffed with Bulgarian teachers, and unwanted populations convinced to move on — heralding a new age of nationalism that will give us the term ‘Balkanization.’ It is a dress rehearsal for the worst abuses to come in the 20th Century.

“Bulgaria cannot and will not be denied its historic and enthographic rights,” Bulgarian Prime Minister Vasil Radoslavov said this spring. “It cannot be without Macedonia, for which it has shed so much blood.” Irredentism — the dream of a Greater Bulgaria — has hardly begun to make the Balkans bleed. 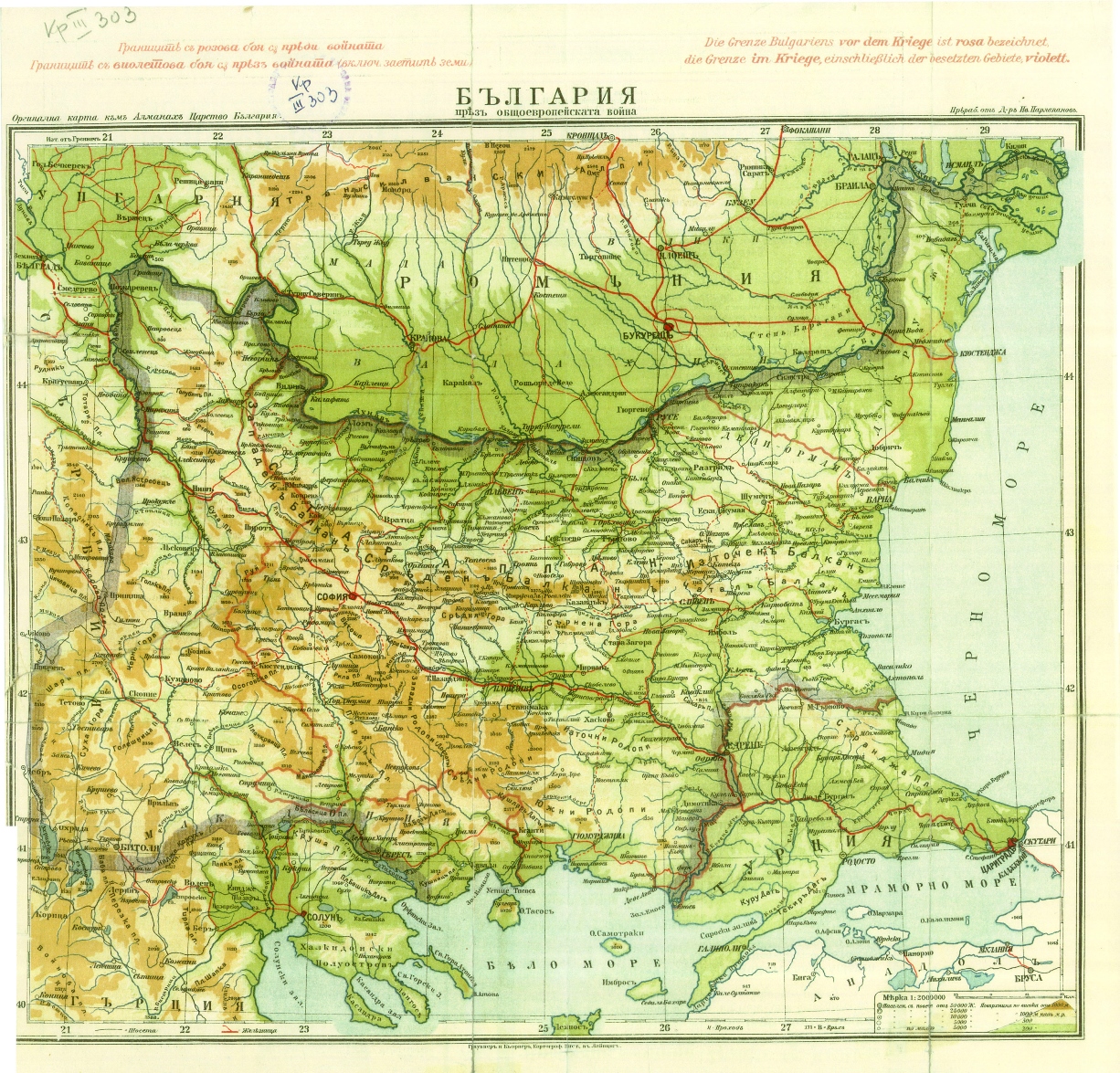 Bulgaria at its largest extent during the war; click to enlarge. After another alliance with Germany to restore these borders, Bulgaria will be punished by permanently losing territories which 155,000 Bulgarians died to gain between 1911 and 1918