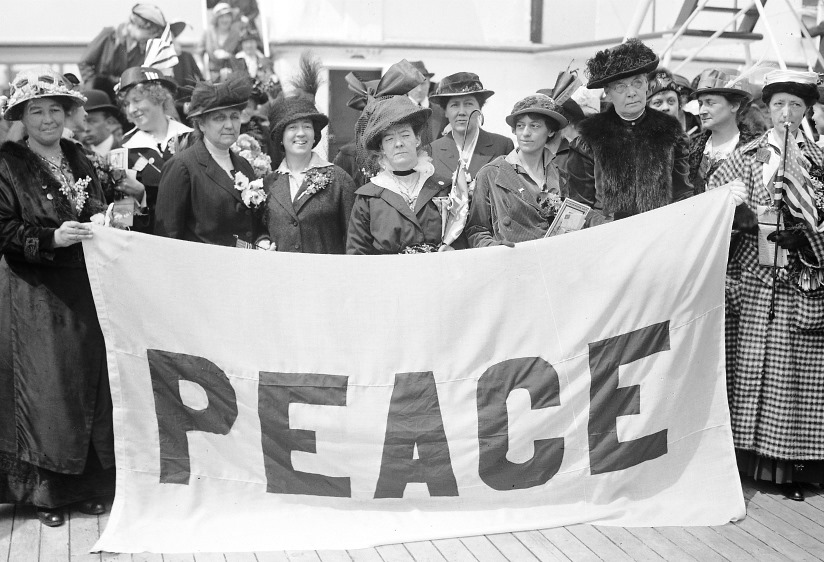 The international peace movement began to take shape after the Napoleonic Wars demonstrated the potential for mass fire combat to spread over the length and breadth of a continent. Formal pacifist societies appeared in the United States and England first, and in 1849 a ‘Peace Congress’ convened in Paris with Victor Hugo, who went on to form a ‘League of Peace and Liberty’ eighteen years later in Geneva, serving as president. As the American Civil War and the Franco-Prussian War raised the stakes of conflict with a transition to industrialized attrition warfare, so has the peace movement become ever more convinced of its own urgency, yet there was nothing in place to stop the Great War from happening. Now, pacifists are already experiencing various levels of wartime oppression in all the belligerent states, but especially when they try to organize internationally.

Seen above standing behind the letter ‘P,’ Jane Addams presided over a Women’s Peace Congress at The Hague held at the end of April this year. An American suffrage activist and social reformer, she is the founder of Hull House, a Chicago settlement home that helps newly-arrived immigrants reestablish their lives in the United States. Like layers of heavy fabric draping a woman’s body, she struggles to get our from under a multitude of stifling social and political limitations all at once, simultaneously fighting racial and national prejudice, economic exploitation and civil rights, and the social straitjacketing of women within a domestic realm. However, it is Addams’s work for disarmament and peace that the New York Times will cite as the cause “dearest to her heart” in their obituary. 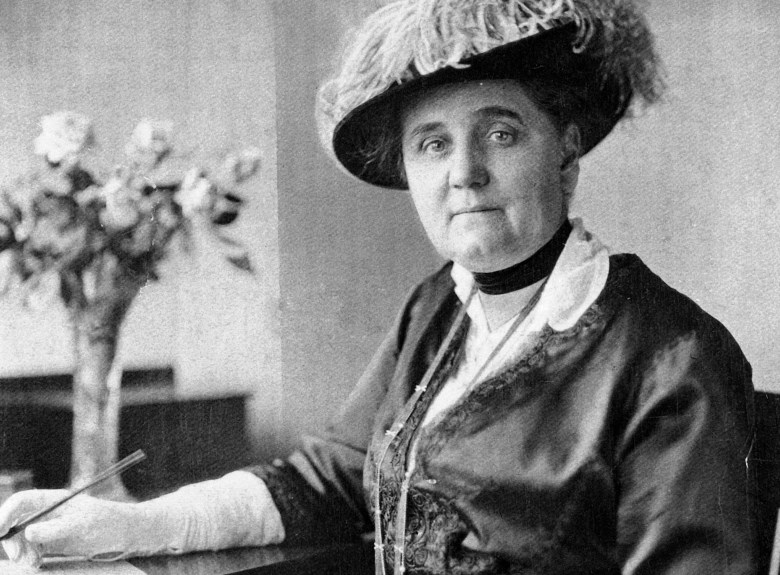 Addams has emerged as an international leader of the peace movement this year, but her communications demonstrate an important contradiction when it comes to foreign and military policy — a dilemma possibly born of naivete that still has formative impact on our world a century later as we wrestle with questions of conflict and insecurity. Writing to President Woodrow Wilson today, for example, Addams argues against the call of the ‘preparedness‘ movement, which seeks to upgrade American military power to defend the nation from nameless, yet obvious potential future adversaries.

Feeling sure that you wish to get from all sources the sense of the American people in regard to great national questions, officers of the Women’s Peace Party venture to call to your attention certain views which they have reason to believe are widespread, although finding no adequate expression in the press.

We believe in real defense against real dangers, but not in a preposterous “preparedness” against hypothetical dangers.

If an exhausted Europe could be an increased menace to our rich, resourceful republic, protected by two oceans, it must be a still greater menace to every other nation.

Whatever increase of war preparations we make would compel poorer nations to imitate us. These preparations would create rivalry, suspicion and taxation in every country.

At this crisis of the world, to establish a “citizen soldiery” and enormously to increase our fighting equipment would inevitably make all other nations fear instead of trust us.

It has been the proud hope of American citizens who love their kind, a hope nobly expressed in several of your own messages, that to the United States might be granted the unique privilege not only of helping the war-torn world to a lasting peace, but of aiding toward a gradual and proportional lessening of that vast burden of armament which has crushed to poverty the peoples of the old world.

Most important of all, it is obvious that increased war preparations in the United States would tend to disqualify our National Executive from rendering the epochal service which this world crisis offers for the establishment of permanent peace.

In fact, the United States is already supplying much of the raw materials and manufactured goods being used by the Entente allies, for the armed camps of Europe are no closer to peace than they were a year ago. In 1915, America still has a smaller army than the one Belgium had when the war began, and that relatively tiny land force is already straining just to shore up the Mexican-American border against the waves of revolutionary violence and civil disorder emanating from south of the Rio Grande. Furthermore, the War Department is barely even monitoring the rapid battlefield developments in air power, chemical weaponry, trench fighting, combat first aid, etc. taking place in Europe, let alone training or equipping troops for such battles, guaranteeing the United States Army will face a steep and bloody learning-curve when it does eventually go to war. Insofar as none of these things will change, Addams gets her wish, for there will be no military reforms to prepare the country for modern warfare.

But it is her emphasis on taking advantage of a “world crisis,” one that gives the President of the United States an opportunity to establish a “permanent peace,” which seems to have the most impact on the progressive Wilson, for after leading America to victory in the Great War he will transform Addams’s call for a League of Nations into a reality, with her endorsement. A century later, Americans still have a schizophrenic relationship to power: the preparedness side has won, offering a smaller price in blood at an ever-greater cost in treasure while promising to make global security possible. But Addams’s sense of national mission abides today even in liberal and progressive circles, where the term ‘American exceptionalism’ simply implies moral purposes rather than military ones. We are today the ‘essential nation’ for both war and peace. 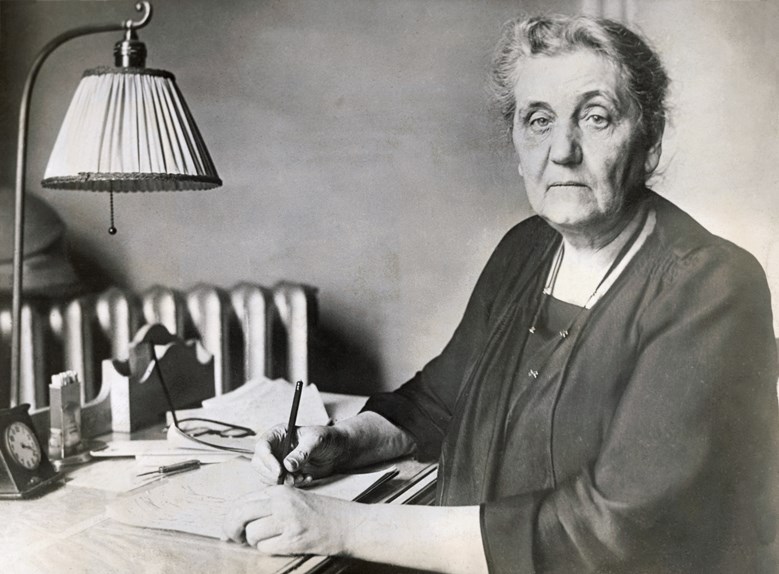 Addams long after the war. Note the missing gloves, hat, lace frills, and layers — fashion changes that have been permanent