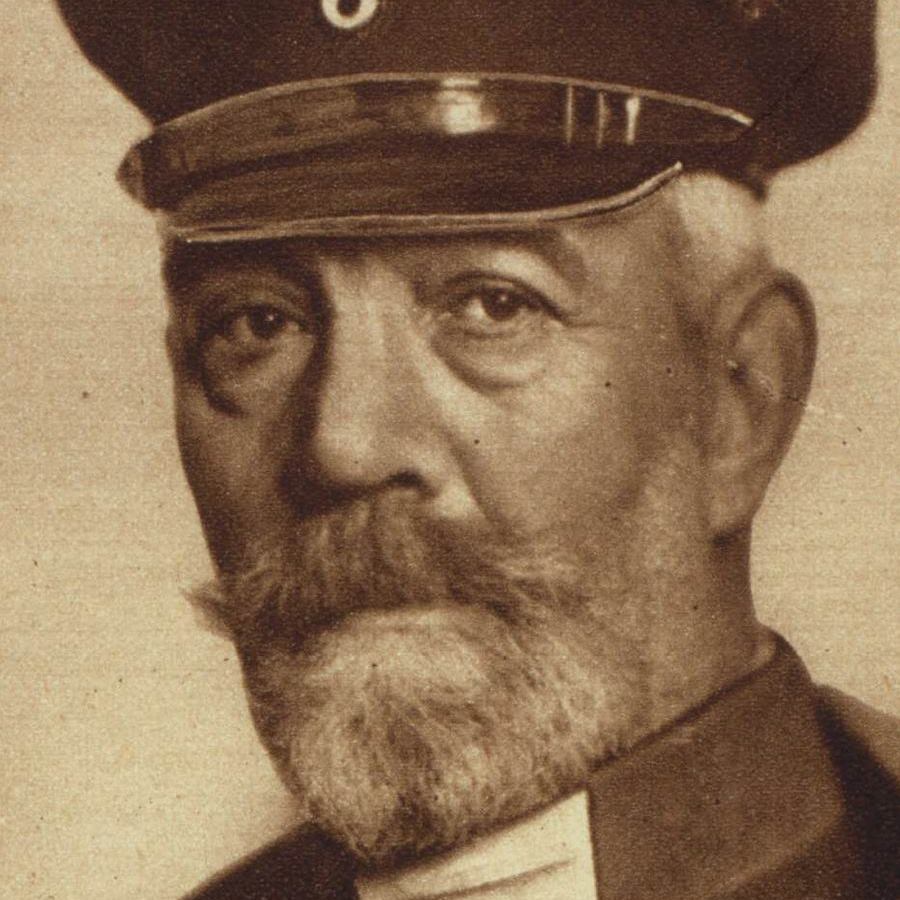 The role of German Chancellor Theobald von Bethmann-Hollweg in the outbreak of war was fairly well understood even at the time. He had been unable to check France’s diplomatic resurgence or slow the Kaiser’s ruinous naval arms race with Britain. During the July Crisis, Bethmann-Hollweg had not restrained Austria until after he finally realized that Russia would not stay out of his Hapsburg ally’s quarrel with Serbia. Outmaneuvered by Helmuth von Moltke, Bethmann-Hollweg gave in to the general’s arguments for full mobilization, after which there was no turning back from war.

But what is less widely understood now — and was not in fact known at all until nearly a half century later — is that after the opening of hostilities, Bethmann-Hollweg made big policy concessions to the German political right about what to do with conquered territories after the war. One hundred years ago today, he signs the Septemberprogram, a planning document for victory that presages the darkest chapters of a later, even greater war of annihilation.

The Great War of 1914 is not some more-noble predecessor to the Holocaust and Hitler’s ethnic cleansing. It is the dress rehearsal. 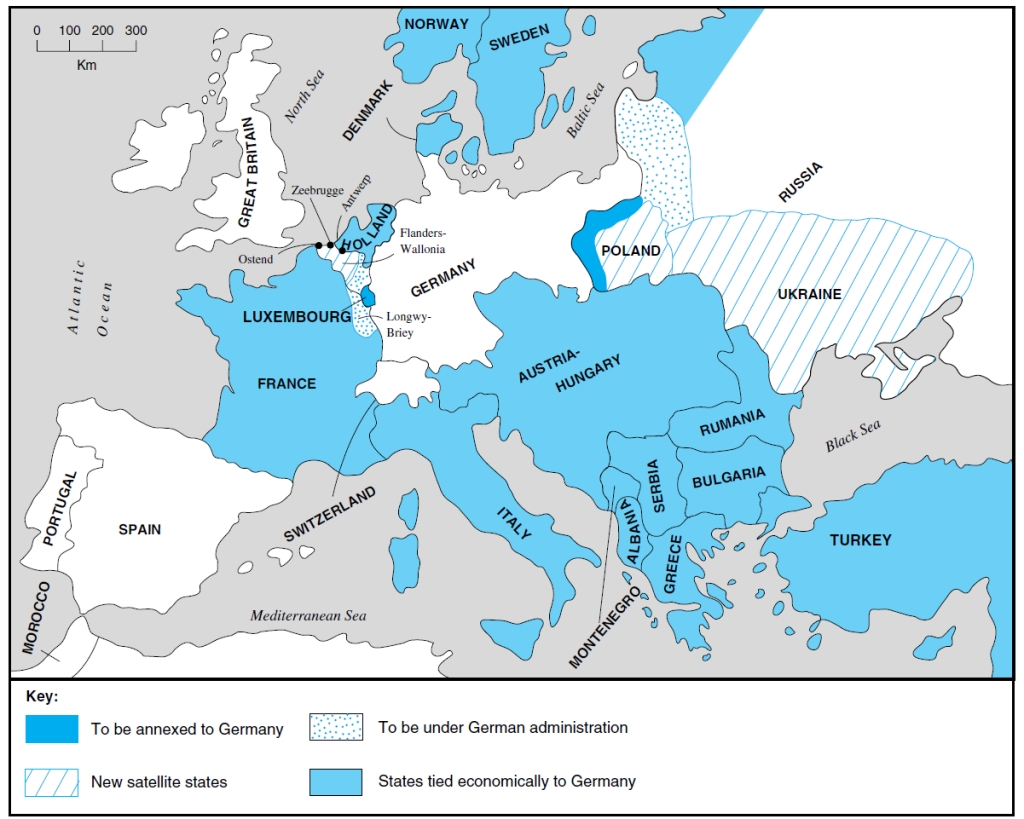 The September Program is a summary memorandum of advice from German industrial and military interests. According to the document, France is to lose territory and be stuck with twenty years of reparations payments to keep her from rearming; at least some part of Belgium is to become Germany too, with any remainder to be no more than a vassal state. Germany’s African possessions will be expanded. The future of Poland is questionable at best, all of Luxembourg is to become part of Germany, and the Netherlands are to be brought into a new economic union of Mitteleuropa.

A central European economic association is to be constructed through common customs agreements, to comprise France, Belgium, Holland, Denmark, Austria-Hungary, Poland and possibly Italy, Sweden, and Norway. This association will probably have no common constitutional head and will provide for ostensible equality among its members, although it will in fact be under German leadership; it must stabilize Germany’s economic predominance in central Europe.

“Predominance” speaks to the ambition of Germany’s Chancellor. Bethmann-Hollweg is determined that victory should not only result in a larger Germany, but also satisfy his most powerful and militant domestic constituencies by preserving their way of life. Tellingly, he has received the brevet rank of general and been issued a uniform (see above) for his civilian leadership role.

Most of the Germans who lead the army to war are social Darwinists. They understand international relations as an inherently violent competition between ethnic nations, and they even see business and trade as an extension of that competition. Their behavior in Belgium, where civilians have already been subject to massacres and mass deportations, demonstrates that they do not discriminate between east and west when deciding which cultures to erase. Chief of the General Staff Helmuth von Moltke is also a member of this Prussian landed aristocracy known as the Junkers.

Junker culture is based on primogeniture: the eldest sons inherit land, while the younger brothers are expected to serve in the military — or, like Bethmann-Hollweg, in the Kaiser’s civil administration. That the nation drops all pretense of any difference between civilian and military leadership just underlines the Junkers’ influence within German politics.

But they are in trouble, and war is how they mean to get out of it. Among their plans: turning Poles out of the “strip” along the East Prussian border by force and resettling those lands with German families. 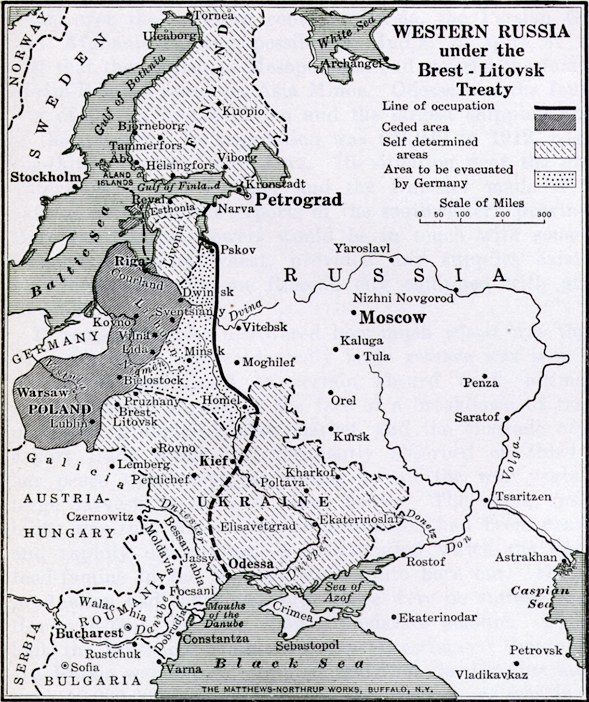 The September Program would morph into the Kreuznach Program, a series of planning conferences which set the lines of the Treaty of Brest-Litovsk between Russia and the Central Powers in 1917

Reactionary and conservative, the Junkers are a holdover of the feudal world — minor Prussian nobility who turned to mercenary service during the Middle Ages to supplement their small freeholds. Known in 1914 for holding backward social views as well as huge, inherited estates east of the River Elbe, the Junkers seem to dominate Germany’s officer class.

While Bethmann-Hollweg has been holding his listening sessions with Germany’s military-industrial complex, Junkers were venting their Protestant bigotry towards Polish and Belgian Catholics through massacre and atrocity. Decades before Hitler uses the word lebensraum, their population purges are at least a semiconscious effort to enlarge their own ethnic nation-state at the expense of others.

Three percent of the Prussian population owns forty percent of the land, and a much higher percentage of the arable soil. This consolidation has come in phases: serfdom was finally eliminated in the 1870s; then many small Prussian farmers sold their lands to move west of the Elbe, where teeming cities featured wage-paying factories without aristocratic sneers. Germany’s overall population growth was twice as fast as France, yet the Junkers of East Prussia faced a declining local population.

They solved this problem by relying on migrant Polish labor — people whose presence within Germany the Junkers have simultaneously campaigned to limit, and whom the German political right wing increasingly looks to erase and replace. 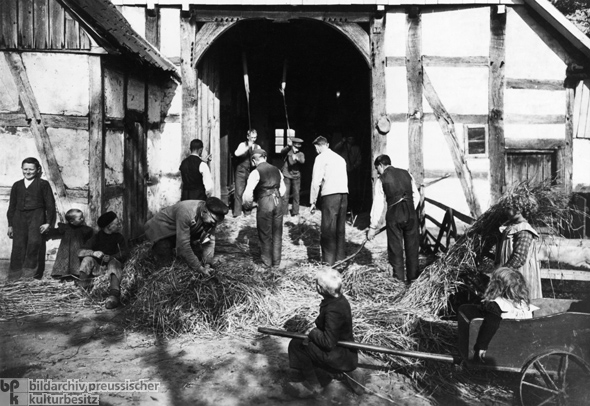 Though Germany’s population had grown twice as fast as France’s since 1871, agricultural productivity had not kept pace and modernization lagged the rest of Europe. Most farming was still done by hand

Junkers have deliberately retarded agricultural modernization in East Prussia out of fear that industrial-era social movements will inevitably follow the machines into their barns, attacking their aristocratic and equestrian virtues. Rather than increase productivity or improve soil quality, they have forestalled the need by setting high import tariffs — and by mortgaging their estates: Junkers have doubled their debts in the last decade.

In other words, German foreign policy has been militarized by people who are living on a bubble, and who are acutely aware of the bubble’s fragility, yet whose way of life remains part of the bubble regardless. The Junkers are trying to avoid the inevitable genteel poverty of economic decline by any means possible, and like their ancestors, they have turned to war.

Yet there are limits to this view of the Junkers as a militant social class. In 1917, Bethmann-Hollweg turns against the Kreuznach Program and leaves office; he has had enough of the right wing war fanatics. Much later, most of Prussia’s best families are deeply suspicious of the ‘little Bavarian‘ Adolf Hitler and never accept him. While plenty of Germany’s generals carry the honorific von, the landed class occupies but a small cadre within the officer corps itself, even in Prussian units.

So perhaps it is more correct to say that the bloody mythology of Teutonic knighthood has become such an important part of German nationhood by 1914 that her contemporary knights have taken it all far too seriously. 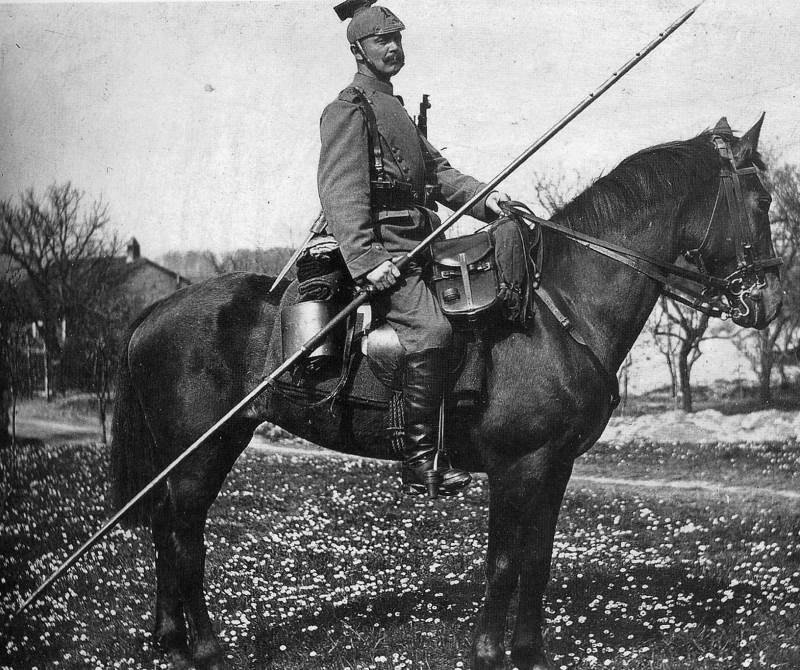