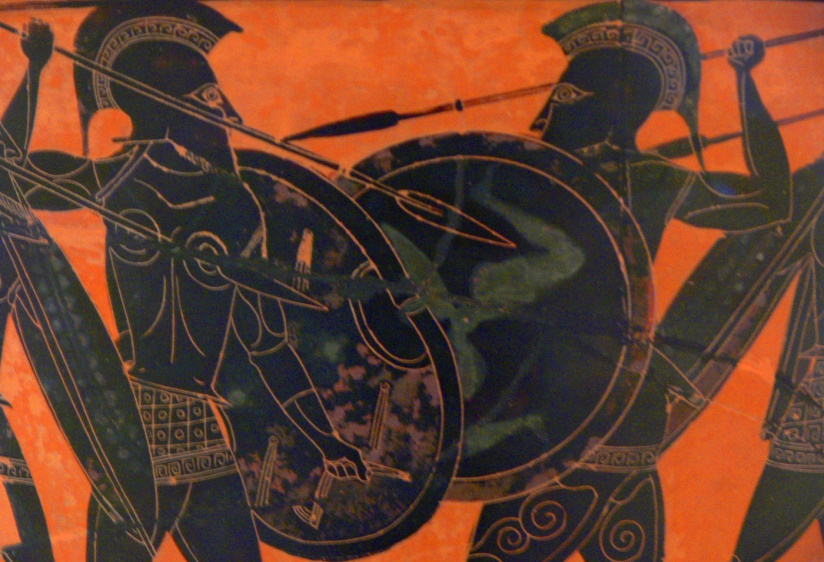 Roughly twenty-six centuries before the Great War, a way of war developed south of the Balkans which made best use of the limiting geography in such a hilly, rocky region. Standing shoulder-to-shoulder in deep ranks, armies formed broad, unified fronts and came to grips in an effort to out-match or out-flank one another, a strategy that works well in the valleys and passes where most battles took place. Hoplite warfare rewarded professional training and preparation, whereas the price of defeat was slavery, and thus this mode of combat became intimately linked to matters of citizenship in the ancient world of Hellas. As a cultural institution, the phalanx was such a formative idea that the tribes of ancient Athens assembled for lawmaking, sports, and theatrical events dressed in the same left-to-right order in which they fought battles. Among the Spartans, it is said, song was the only nonviolent activity as manly as war, and the three ranks of the Greek chorus — experienced singers in front, established veterans in back, with the newest and least-trained voices sandwiched in the middle — reflects the doctrine and soldierization of the phalanx.

The combat psychology of the Hellenes was as complex as the ancient world itself, but briefly simplified: Because each man fought right-handed to cover his companion’s right with the shield on his own left arm, the file of soldiers on the far right end of each phalanx naturally tended to guide the entire formation onto the farthest right point of the enemy’s front rank to avoid being defenseless to their own right. As imagined from high above, we can see some of these battles as comic affairs: two armies chase each other’s left flank in an exhausting, daylong spin, something a bit like snarling dogs chasing each other’s tails, until one side loses its cohesion and breaks. From the ground level, however, these wars were intensely personal, and that makes them very different from the Great War, for most of those killed actually got to see the person who killed them. Despite the emphasis on uniformity, discipline, and impersonal ‘Othering,’ Hoplite warfare largely occurred at intimate range.

In 1915, however, most casualties are incurred by indirect fire from enemies never seen in person. The Western and Eastern fronts are essentially protracted sieges; both began with armies in maneuver, at first lining up with all arms wheel-to-shoulder and blasting away at one another until ammunition gave out, as if the combatants were obeying some genetic imperative to form vast phalanxes across Europe. The British Army held the left flank of the French army during this phase, and a broken trust between allied generals led to a break in ranks, nearly undoing the cross-channel alliance in the early weeks of the conflict. When the German flank was overextended, the western war took its current shape. While the war in the east has unfolded differently, a new Winter line of trenches from the Baltic Sea to the Romanian border argues that Alexander the Great would have understood the Great War perfectly, given a few weeks to learn the weapons and observe the tactics. A master of sieges, he even understood artillery.

The scene of battle a century ago today in Macedonia, the homeland of Alexander’s army. Via C. Ward Price. Click to embiggen

Today, the British government offers the island of Cyprus to Greece if she will fulfill her treaty obligations to Serbia. King Constantine’s new prime minister lacks the confidence of parliament, however, and the political crisis is a direct result of the monarch’s personal intransigence toward Entente advances. Split between Turkey and Greece decades later in an absurd imitation of the Great War, Cyprus is a British-administered portion of the long-dying Ottoman Empire, like Egypt, and an example of the destructive conflicts that will continue to erupt on ancient ethnic and linguistic fault lines along the Aegean rim throughout the next century. Constantine will set some of the most apocalyptic of those events into motion himself during his second reign after the Great War. In London, Irish Protestant leader Sir Edward Carson resigns the Asquith cabinet in protest of the government’s failed Balkan policy, further eroding the political center in the United Kingdom.

Meanwhile today, another formation of the Bulgarian Army stabs like a spearhead into the Timok river valley that forms the southern end of their border with old Serbia and Kriva Palanka, the northwestern corner of Macedonia. The first of Sarrail’s formations makes contact with the Bulgarians at Strumica today, and while they seem to win the engagement this is a misleading interpretation of the result. In accordance with their arrangements against the Serbs, the Bulgarians have no intentions of attacking neutral Greece; instead, they slide towards their right flank, forcing Sarrail to extend his all-too-limited forces.

To the north, the Serbian Army is collapsing under simultaneous offensives by three enemy powers; this new offensive thrust aims towards Skopje, threatening a vital line of communications from the Greek port of Salonika into Serbia along the valley of the Vardar river with its railway and telegraph lines. That route will now become the axis on which French General Maurice Sarrail attempts to link flanks with the Serbian Army during the week to come; he will fail, for his ally is disintegrating, and the force he meets today is merely pinning him in place while the race along the Vardar continues. In the first week of November, the 9th Division from Pleven enters Serbia’s wartime capital of Niš, claiming the country’s last shell factory. By then, resistance is crumbling and the rail route has been cut off, for the Entente allies were simply unable to bring their armies to bear fast enough in the Balkans.

Sarrail maintains a forward position at Lake Doiran on the Serbo-Greek border, but he is forced to withdraw on December 3rd, for he is without allies on his left or right flank, and to be outflanked is to be defeated. The Serbs obey a code that Alexander would have understood perfectly well: to be defeated is to become a slave, a prisoner, a victim, and so a human flood is already in motion now, becoming a sorrowful surge in the days to come. Refugees press against borders in need of relief, receiving pity and scorn in turn. Unable to sustain a phalanx in the field, Serbia’s small army is almost destroyed, and the grim survivors are left with only the promise of vengeance to sustain them. 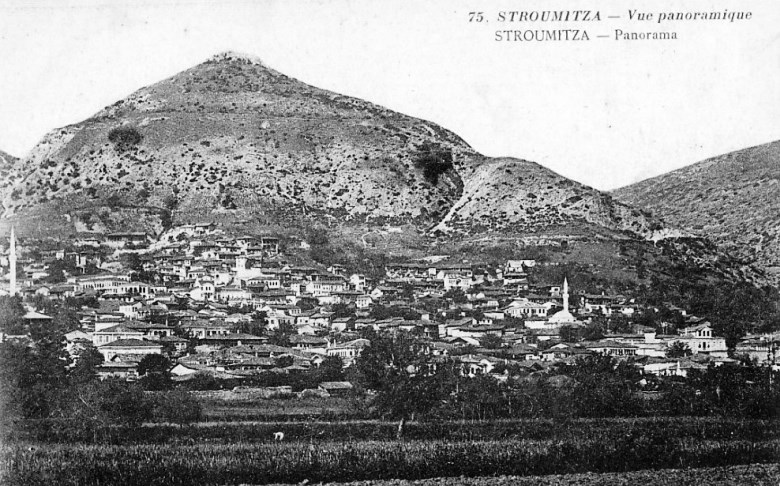 A contemporary view of Strumica. Note the minaret; imagine fighting a battle in this kind of terrain. Via Delcampe.net