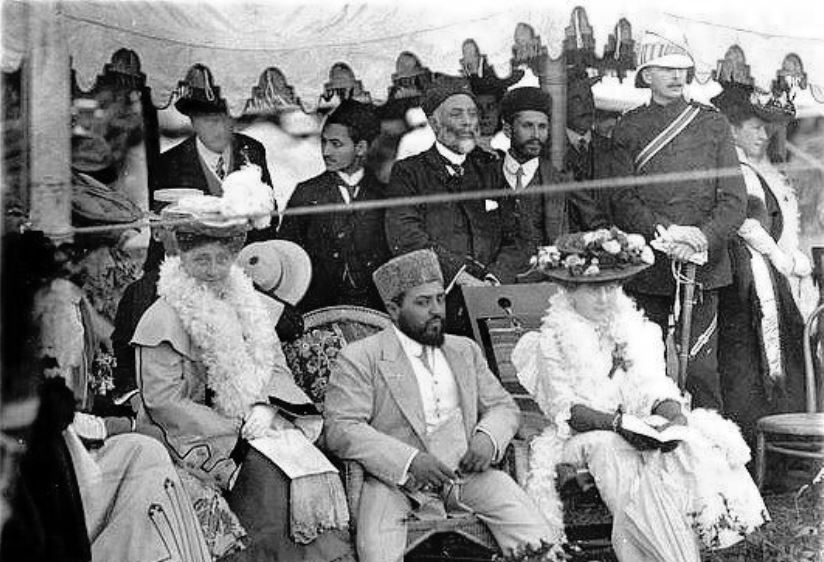 After travelling thousands of torturous miles from Istanbul to Baghdad to Tehran to Herat to Kabul, dodging Russian and British patrols in small groups, the members of the Central Powers diplomatic mission to Afghanistan were pleased to recuperate in the Bagh-e-Babur Palace with sumptuous foods and new uniforms. But that was twenty-four days ago, and a brief visit from King Habibullah Khan on the fourth day did not give Germans Oskar von Niedermayer, Werner Otto von Hentig, or their surviving companions any chance to make their pitch. Aware of the deep anti-British sentiment in the country, yet frustrated by their house arrest, the delegates have gone so far as to feign a hunger strike trying to prompt their next meeting with him.

As seen above in 1905 during a visit to Peshawar, Habibullah is a modernizing influence on his country and a stickler for courtly etiquette, but his delays are not about courtesy. Habibullah has recently received a letter from King George V, who composed the friendly note of thanks for continued neutrality at the request of his diplomats, but it was typewritten, which required a response in kind — and there was no typewriter in Kabul; a machine made for typing in Farsi, the language of the court, had to be procured. A simultaneous matter involved Habibullah’s annual British stipend, which was greatly increased as an inducement to remain uncommitted; leveraging his rare opportunity, the King of Afghanistan made it clear that the price of maintaining neutrality would be far more expensive. As violence has already broken out in the ‘tribal belt’ along India’s border zone, the British ambassador in Kabul has not argued the point, for Habibullah is practically the only friend Britain has in the country. 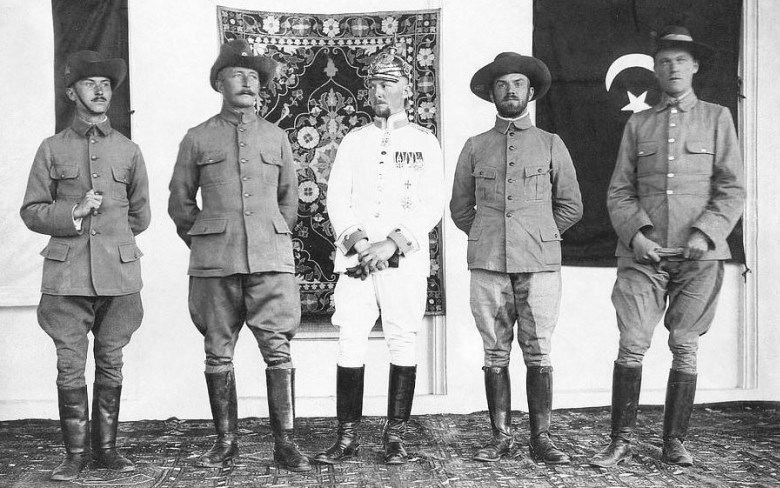 A photograph the mission took in Kabul. Hentig wears the spiked helmet at center; Niedermayer is 2nd from the right

But the most important reason for the delay has been the durbar of tribal elders and village headmen that Habibullah called to advise him. A consensus formed around two suggestions: that Afghanistan join the Ottoman jihad openly now, or request German arms and Turkish soldiers while planning for a surprise attack on India. They are hardly the most warlike voices in the country, for the firebrand preachers in Kabul have a much more direct hold on the people, and their sermons grow more shrill all the time. Making no decision, the King has finally made arrangements to meet the foreigners, and today five of them are pleased to be picked up from the Bagh-e-Babur by British-built Rolls Royce automobiles, which whisk them away down the country’s only improved road to the King’s mountain residence.

Met by trumpets and fanfare, Hentig ostentatiously wears a pickelhaube helmet, which receives quite a bit of admiration from the Crown Prince, to whom he later gifts it. Following diplomatic protocol, Kumar Mahendrah Pratap, an Indian nationalist and Hindu who is ostensibly the highest-ranking member of the mission, leads Hentig and Niedermayer into their audience with Habibullah in single file; behind them are Major Kazim Bey of the Turkish Army and Mohammed Barakatullah, a Muslim co-conspirator of Pratap who serves as translator.

The King is boisterous, perhaps a bit loud from being a bit deaf, and engages every visitor in the course of his conversation. He wears spectacles and an English sporting jacket, and sits flanked by his sons. Hentig hands him letters from the Sultan of Turkey, the German chancellor, and the Kaiser himself; this last epistle is also typed, which Habibullah notes with disapproval. Cleverly, Hentig counters with the fiction that Wilhelm II had to dictate the letter on the battlefield, where no calligrapher was available. When the king speaks of the mission as though they are merchants come to show their wares, Hentig objects. “We did not come to present merchandise or conduct commercial business. We have come to reveal what you will not read in the enemy press.”

When lunch is served, Pratap sits to the king’s right and is served a special meal prepared by a Hindu cook. Reflecting the ever-present risk of poisoning, Habibullah has a food taster, and keeps his drinking water in a locked silver samovar. He never commits himself, but lays out his strategic dilemma in plain language: Afghanistan is landlocked, with Russia on one side and British India on the other, dependent on British financing and unable to sustain a long war with either neighboring empire. Hentig and Niedermayer sense that Habibullah is holding out for solid offers of military assistance; they cannot make any such promises, however, for there is no realistic scenario for Germany to deliver on them. Their offers of vast new territories are nice, but not enough incentive to close the deal, and so the audience ends without a clear decision. The nighttime ride back to the Bagh-e-Babur is solemn with disappointment. 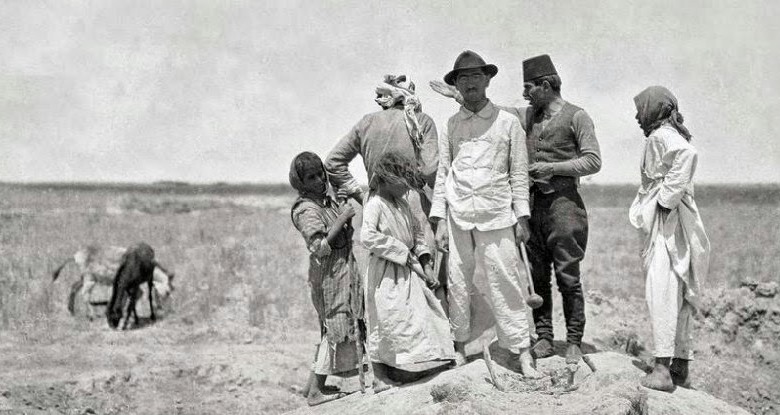 Pratap holding a ladle at a Mesopotamian well. He was sick with malaria and dysentery while crossing Persia

Meanwhile, the chaos and instability that agents of the Central Powers have set in motion throughout the region seems to be reaching a boiling point. Today, Persian Cossacks arrive in Kermanshah to relieve British and Russian consulates in answer to a wave of terrorism, attacks, and assassinations, marking a deepening crisis in a very weak state. Fighting also continues on the Northwest Frontier of India as radicalized tribal militants attack the Army of India, now spread quite thin by the demands of war. The Niedermayer-Hentig expedition is failing to draw Afghanistan into the conflict, but if it were to succeed at that goal, the alliance would certainly put enormous stress on the far-flung British Empire, perhaps even leading to a Central Powers victory.

Despite failing in its aims, the mission has unforeseen effects well beyond their tenure in Kabul. Hentig and Niedermayer greatly influence Habibullah’s son Amanullah, who wins a power struggle after his father’s assassination in 1919 and puts much of their past advice into practice. Indian nationalists will incorporate the expedition into their narratives of independence. And to be frank, little has really changed in Afghanistan, or the tribal regions of what is now Pakistan, during the last century: friendships are still expensive, diverse populations still resent foreign imperial domination, while instability and violence seem to flower in a seasonal rhythm, just like the poppy fields. 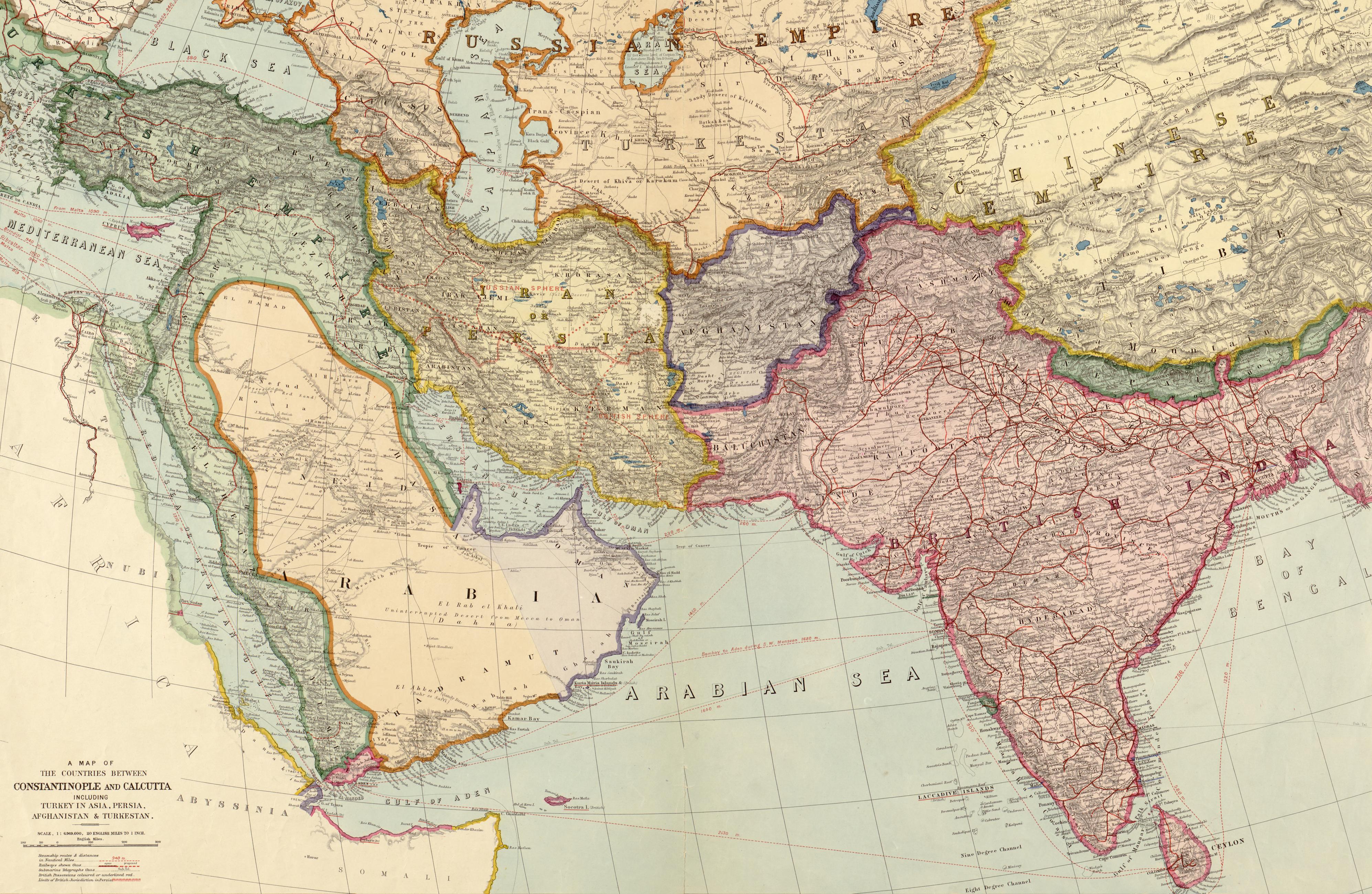 A map of the Middle East, Central and South Asia from 1912. Click to embiggen