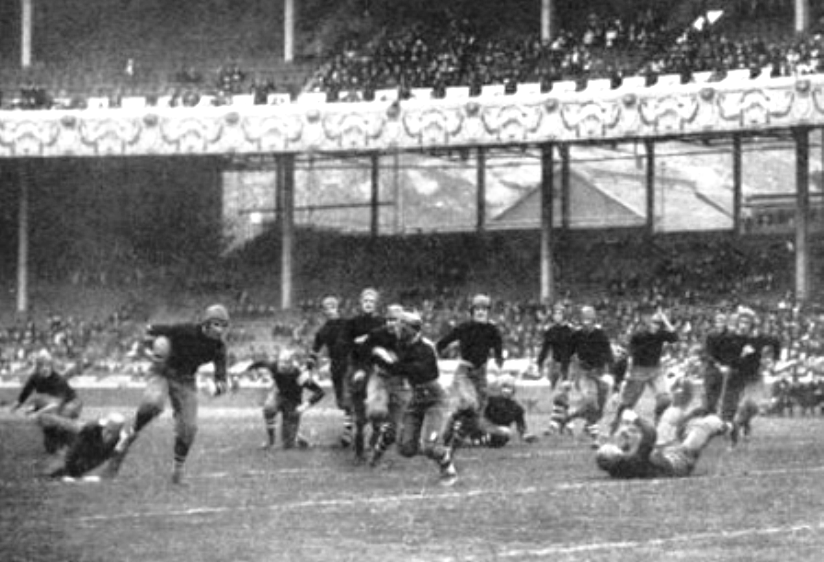 Fourteen years have passed since Pasadena last hosted a football game for its annual New Years Day Tournament of Roses. Won by the Michigan Wolverines to cap off a perfect season in which the team scored 550 points and surrendered none, that game ended on a gentlemen’s agreement with eight minutes remaining and 49 points on the board — an example of so-called ‘mercy rules.’ Since that lopsided game in 1902, the Tournament has tried more exotic attractions, such as charioteers and ostrich races, while the game of American football went through enormous changes.

At President Theodore Roosevelt’s instigation, a hodgepodge of rules has been replaced with uniformity on every field. The value of a touchdown has changed from five points to six, and field goals from five to three; the length of the field and the duration of the four quarters has been established forever; ten yards are now needed for a first down rather than five, and forward passing is now legal in every game. In fact, 1915 has been a groundbreaking year for American football, as the ‘bowl season’ has included no less than five games matching teams from the western states with clubs from east of the Mississippi River, a sign of the rapid nationwide growth in the popularity of the sport.

Seen above, the Cornell Big Red have finished 9-0 in a strong field (see above), becoming the consensus ‘national champion,’ but this still-imaginary award is entirely subjective. A century before the first college football playoff formalizes the process of determining a top team, there is not even an Associated Press poll to help form public opinion, much less a coaches poll or computer rankings. Even though the criteria for champions do not change much in the decades to come, the history of American college football after 1915 will be a running argument about how to determine the best team in the country. 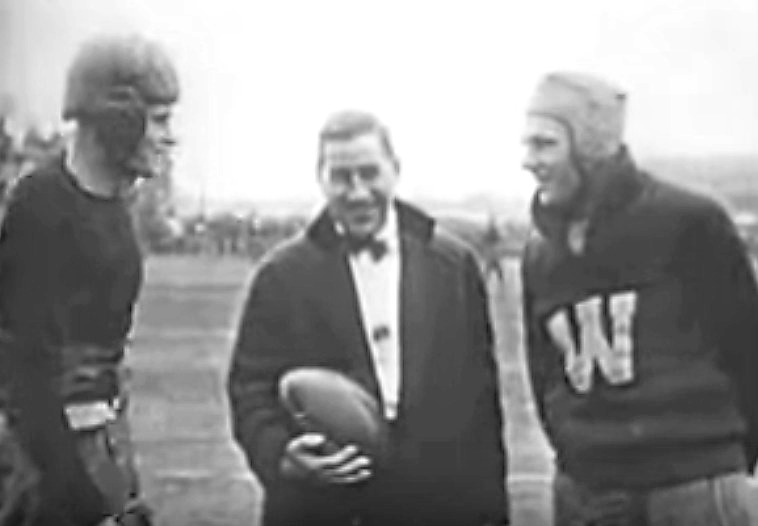 Coin toss: team captains meet referee Walter H. Eckersall to determine which side kicks off first. Note the shape of the ball

Today’s Rose Bowl is a good example of how this decentralization of opportunity bedevils the sport. The game features a strong Washington State University team with a 7-0 record. Led by their new Lakota Native American coach Lone Star Dietz, the Cougars have outscored their opponents 204-10 in the course of the season, but their scheduled opponents have been weaker than Cornell’s. Seeking an opponent of better caliber to improve their standing, WSU has tried to interest Pittsburgh in the Tournament of Roses, but they were more eager for a rematch with Cornell; the Nebraska Cornhuskers, Syracuse Orange, and Michigan have also declined the invitation. Finally, the Bruins of Brown University agreed to play the West coast powerhouse, but with a season record of 5-3-1, they are hardly top-notch competition. As a result, the greatest team in WSU history will not be named the best in the nation.

The weather is terrible. Days of rain have turned the field to mud, and the downpour leaves thousands of seats empty. Reduced to a diving run game, the first half ends in a scoreless tie with each team failing inside the 20-yard line, the so-called ‘red zone.’ WSU finally punches through the exhausted Brown defense in the third quarter, adding a second touchdown in the fourth to win the game 14-0. But history is still made today, for Brown halfback Fritz Pollard is the first black football player to be named an All-American; he will go on to become one of the first two black professional football players in history — and then the first black head coach.

Footballs dating from 1894 (upper left) to 2014 (bottom right). The shape, color, and size of the ball change as forward passing increases and placekicking replaces drop-kicking

While he was saving the game of football from itself, Roosevelt insisted that football prepares young men for the battlefield, and in fact there are remarkable similarities between the nature of the sport and the characteristic violence of the Great War. Born from the British working class sports of association football (soccer) and rugby, the length of an American football game is governed by a precisely-managed clock — just like the modern factory with its time cards and shift-announcing horns. Reflecting the rich diversity of the Western Front and the imperial polyglot army manning the trenches, racial divisions and color lines are already more muted in football than in baseball, an American sport with roots in the aristocratic game of cricket. Indeed, the professional baseball leagues will continue segregated professional play for decades to come.

But the shape of the game itself speaks to the applied principles of industrialized mass fire which seem to inspire it. On offense, each team tries to outflank the other or achieve a breakthrough; on defense, they struggle to hold the line. A no man’s land-like ‘neutral zone’ separates the opposing ‘armies’ until the ‘snap,’ and every operation (‘play’) requires a committee meeting to agree on the formation and complex maneuvers involved. The most telling sign of this relationship, however, is what’s on the average football player’s head. Just as the high rate of head injuries has led all of the combatants on the Western Front to begin distributing helmets by the beginning of 1916, leather headgear has greatly reduced the horrifying toll of deaths and injuries on the football field that so concerned Roosevelt when his own son played for Harvard. Recent improvements include more padding, protective flaps with ear-holes for better communication, and the first internal webbing to separate the player’s skull from the hard outer shell of his helmet — an engineering feature found inside every new military helmet, too.

Whereas Britain has suspended its professional sports for the duration of the war, America remains neutral. Despite understandable controversy, even the coming of war will not suspend college football; only the public quarantines of the Spanish influenza pandemic in 1918 can accomplish that, and only incompletely. The Rose Bowl will continue as an annual football tradition — one that survives a century later even as the college game finally, grudgingly changes to an actual playoff system.

As on the Western Front, progress is measured in yards. Hash marks are a later innovation