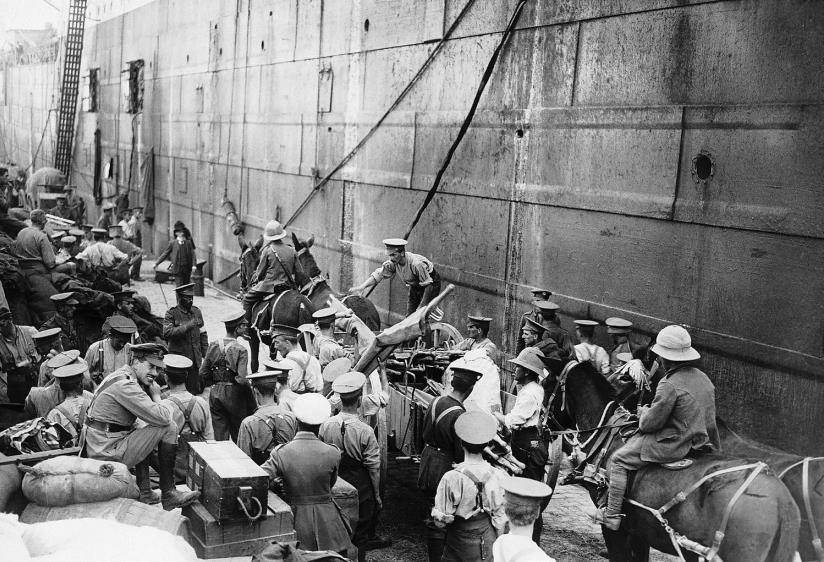 Yesterday, French and British diplomats in Athens informed Greek Prime Minister Elefthérios Venizélos that they were occupying the port city of Salonika, now called Thessaloniki, in order to enforce the landlocked Serbian kingdom’s rights to sea access by way of the railroad through Macedonia as stipulated in the Balkan state’s 1913 treaty with Greece. Today, the first two brigades of a French-led Entente force disembark from troop ships on the Aegean Sea (see above); within four days, 20,000 French and British soldiers will occupy a country that is still officially neutral. Venizélos lodges a pro forma protest, but he is privately in full agreement with the allies, for Bulgaria’s declaration of ‘armed neutrality’ is obviously a thin cover for mobilization against Serbia.

Reflecting a shift in London and Paris, where the Dardanelles expedition is quietly being acknowledged as a disaster, the landings at Salonika echo the original vision of Lord Kitchener, the British Minister of War. He had wanted to circumvent the deadlock of the Western Front by attacking the Austro-Hungarian Empire from the south, but this impulse was redirected into the ongoing Gallipoli fiasco. Having blundered against Turkey with a delay in landings, the belated deployment to Salonika is also too little, too late to forestall the pending destruction of Serbia by three armies. 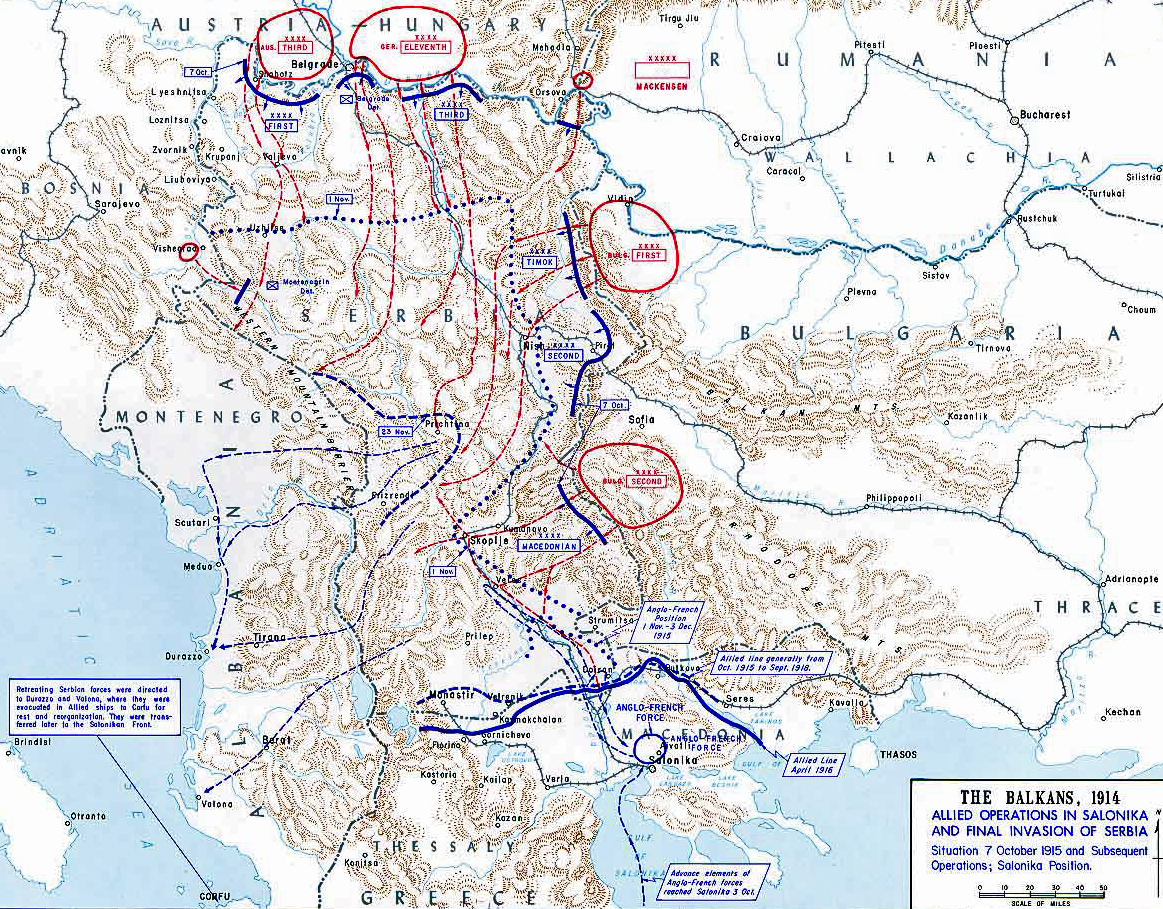 A campaign map of the Balkan Front as it begins to take shape today. Click to enlarge

Meanwhile today, the Entente allies are formulating a united ultimatum to the king of Bulgaria. Delivered tomorrow, the message calls on Ferdinand I twenty four hours to disown the Central Powers and expel their military advisers or face war. French, Russian, and British diplomats leave Sofia the next day.

In Paris, Salonika is seen as the perfect faraway place to send General Maurice Sarrail, whose open association with leftist politicians led Joseph Joffre to replace him as commander of Third Army in July. By the time he arrives on the 10th, however, it is already clear that Entente policy has failed to persuade or deter Bulgaria. Worse, the railway infrastructure through Macedonia is insufficient to support the quantity of logistics necessary to support the Serbs against an invasion as big as the one about to begin. But the biggest impediment to operations is the Greek Army, for in the time it has taken for Sarrail to arrive, the Salonika expedition has already shattered the fragile political stability of his new host country, vastly complicating his mission and narrowing his parameters of action. 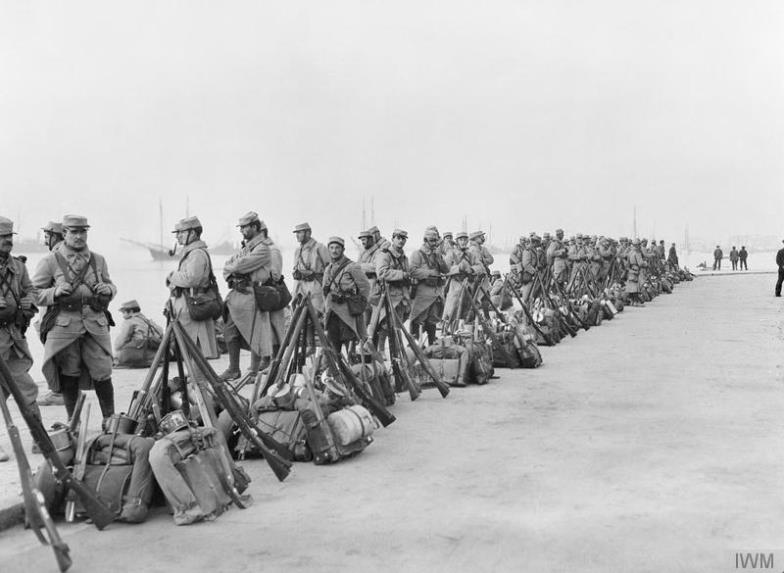 The French 84th Infantry Regiment on the waterfront at Salonika. Note the soft caps being replaced on the Western Front

Stating in September that Greece was only “loosing her sword” by mobilizing in response to Bulgaria’s moves, King Constantine I has a very different conception of the Serbian-Greek treaty than his Prime Minister, with whom he has clashed ever since the Great War began. Married to Kaiser Wilhelm’s sister Sophia, he is decidedly inclined against the Entente allies, and chooses to regard the treaty as binding only if Greece itself is attacked. Assured by the Germans that Bulgaria will not attack Greece, Constantine uses his constitutional powers to sweep Venizélos aside and ignore the will of Parliament. As a result, the Greek Army is about to become far less cooperative with the occupying powers, leaving Sarrail to worry almost as much about his hosts as his enemies. 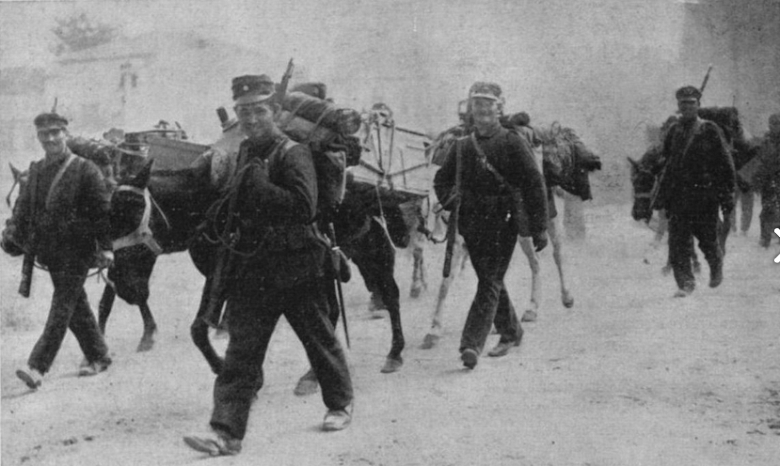 Greek troops at Salonika in the Fall of 1915. Poor and badly equipped, they are unready for a sustained fight